Board Game Review - Red Raven Games' - Near and Far

Board game reviews are something I do on an infrequent basis when I've gotten the opportunity to play through a game enough times to be comfortable with it.

All of Ryan Laukat's games are worth the investment of your time and money. Great mechanics, theme, artwork, presentation and value.

This game is the culmination of a series of games that began with The Ancient World that take on various moments in this fictional world's history. Near and Far is the sequel to both Above and Below and Islebound. And, like Above and Below this is a storytelling game where take on the role of a character, gather up adventurers, pack birds, artifacts and food and go adventuring in the wilds.

Out there you perform quests which present you with choices both practical and moral to accomplish your goals. This is a wonderful mechanic, where you are presented (by having another player read to you) with an encounter you have to overcome.

If successful you get some reward which you bring back to town to recruit more powerful characters or build ancient artifacts which both score you points and give you extra abilities.

Mechanically, this is a straight-forward 'worker-placement' style game wherein on your turn you take an action, placing your character somewhere to perform a task.

The town board with various buildings to visit to perform tasks - recruit people, mine gems, buy packbirds, farm food

Once you are done in town, you go adventuring on the mapboard. 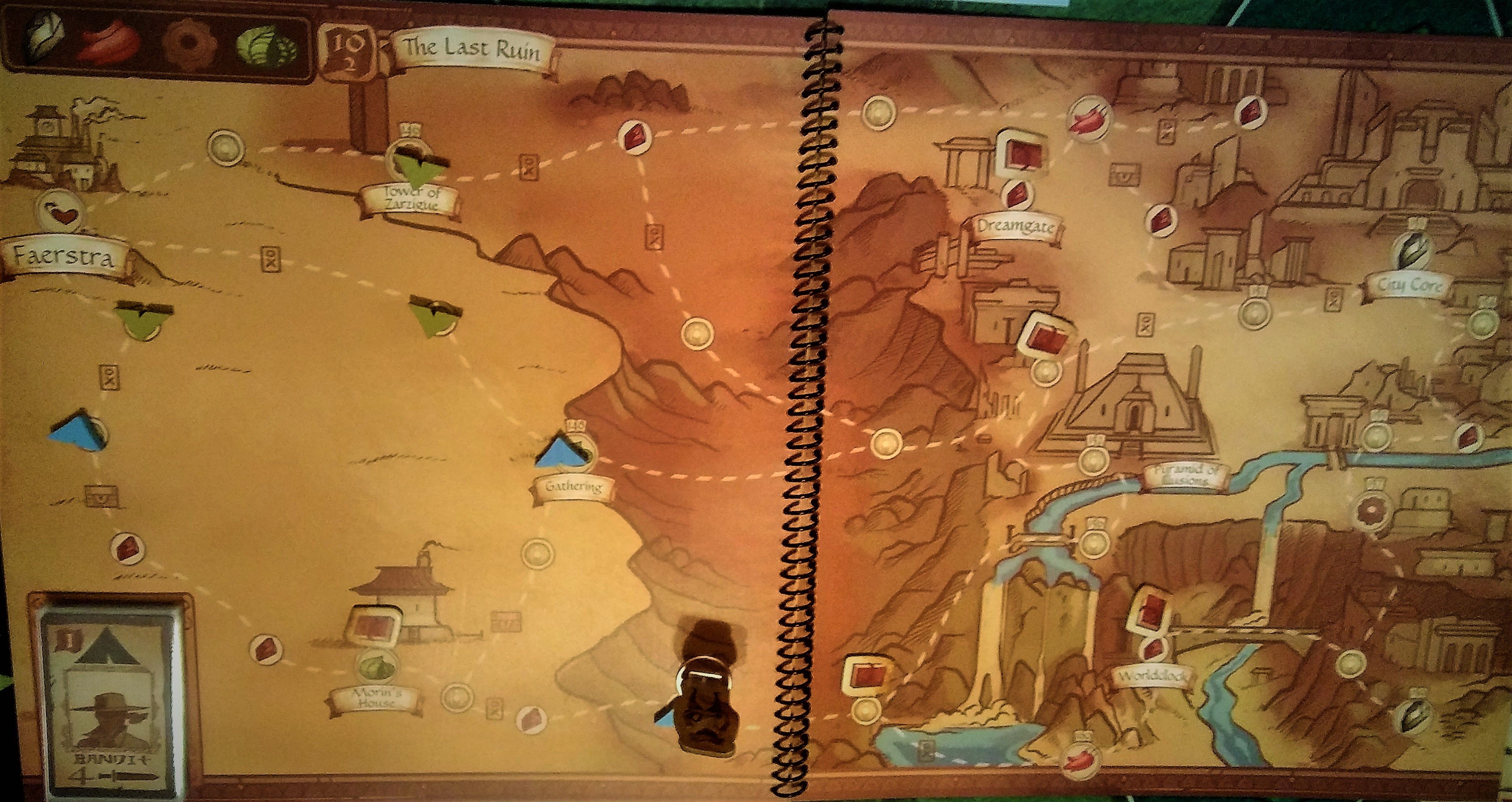 This is the adventure map, where you face down bandits, have interesting encounters, make camps

You track all of this on your personal player board, including who is in your adventuring party, their health, your food, gems, coins and honorariums from the four tribes that inhabit the land. There is a story and campaign mode where you play multiple games over the course of which you advance your character and uncover bits and pieces of the whole story that is taking place as you travel from region to region (map to map).

The map book comes with 11 maps. And the storybook has over 200 encounters. This includes full background stories for each of the eight characters you can play.

The player board keeps track of party, its health, what skills you have as a group, your money/food.
Also, a Character sheet for keeping track of the progress from game to game.

Near and Far is a fantastic game. It's beautiful, like all of Ryan Laukat's games. Red Raven is a small company. Ryan is not only the designer but also the artist and along with his wife, the writers of the stories as well. All of his games have a personal touch to them.

And with each one he releases those personal touches improve. There is a clear progression from his first major game, The Ancient World to his latest, Near and Far.

Mechanically, this is what we hardcore boardgamers would call a 'medium-weight Euro' style game. Euro-games are those that involve doing a simple action on your turn, with very strong mathematical underpinnings and more often than not, a tacked-on theme.

They are generally mathematical exercises masquerading as adventure games. The most famous of these is Settlers of Catan, which I would consider a light-Euro. At the other end of the spectrum are games like Agricola or Power Grid which leave you no margin for error and a poor decision early in the game will leave you far behind for the rest of it.

Games like Near and Far do their best to mask all of that and bring immersion and theme to the forefront and push the math and the little-colored cubes to the background.

And because of that they are great introductory games to this style of board gaming. You may be a little overwhelmed by all of the moving parts but at the end of the day, these are simply -- take an action/do a thing games. The mechanics are simple.

Mastering them is the hard part.

And I'm quite fond of saying that don't play medium-weight Euros to win, I play them to survive and do the best I can. If I win, great! But, that's not the point. The point is to spend 90 minutes to 2 hours with my friends and family playing a beautiful game and connect with them.

Games should be fun, not work.

And that's where I feel strongly Ryan Laukat gets that balance between complexity/difficulty and immersion/fun right.

The stories in Near and Far are excellent. My daughter and I played through Character Mode, where we learned the backstory of the character we were each playing. This took three games. And over the course of those three games and the 10 quests I got to really feel for Shardling and her predicament.

As a writer I really appreciated that attention to detail.

These aren't simple stories of right and wrong -- video game morality. These are real choices that define who the character you are playing is.

I recommend all of Ryan's Games, especially Islebound and City of Iron. These are top notch games with great mechanics and are a pleasure to put on my table. City of Iron is the most hard-core, while Islebound the most elegant.

Near and Far is the master-class in this type of game design, a niche that Ryan Laukat has carved out for himself to show new designers where to go next.

I so need to get this board game! Glad I followed the breadcrumbs from your comment on my blog to your page :)

Excellent. I'm happy to have made Ryan another sale. I'll do reviews on his other games as well, if that's what y'all'd like to see. I have a good collection now.

I want to get my husband into playing these types of games haha I love them!

I haven't played that one. Do a review, I'd love to hear about it.

Great Review!! I feel like going and playing it! ;-)
It is an area I don't know much about but your passion and knowledge can be felt all through your blog.
Just tell us... Are these games suitable for kids?? Thanks

Most of Ryan's games are suitable for kids around 9 and up. I would start with Above and Below. All the cool storytelling and neat creatures to recruit but with more streamlined mechanics. It is easier to grasp than Near and Far... fewer moving parts.

It took my 11 year old daughter four or five games to truly get Near and Far after having played A&B and other middle-weight games.

But, she got it so well that Friday night she and I finished up our "Character" mini-campaign. I was up 15 points, over two games, which is a lot when a good score is in the mid-50's.

She beat me in that game by 16 and won the whole campaign by a point.

The smile could be seen from orbit.

Mine, of course, proud poppa and all that. She was kinda happy too.

You know, I shall take a deep look into these games... thanks again!

This post has received a 0.90 % upvote from @booster thanks to: @goldgoatsnguns.

Explore heaps of maps in a search for the Last Ruin, treasure hunting, competing with fellow travelers, looking for adventures; that sounds perfect for a nomad like me! :-D

Nice review. Amaizing post , detail oriented and well elaborated with beautiful fresh pics. keep it up. thank you for sharing