Hey guys, I'm ggteixeira and for today's post we'll be starting up a new series revolving around my playthrough of the game Mount & Blade: Warband. More specifically we'll be following the story and life of my new character I created in-game, John Smith.

What is Mount & Blade: Warband?

Mount & Blade: Warband is a single-player sandbox open-world role-playing strategy game where you create a character before joining into the fictional medieval war-torn lands of Calradia. Warband's single-player is packed with hundreds upon hundreds of hours of content including warring kingdoms, a working economy, battles to fight in and so much more. The options are almost endless and how you choose to live your life in Calradia is up to you. Want to be a rich merchant that owns tons of property? How about an infamous bandit known for robbing ill-guarded caravans? Or even my personal favorite, a new King starting up his new kingdom with a thirst for lands, coin and power!

I'd also like to note that Mount & Blade: Warband has its own fun multiplayer with a handful of game-modes that players can choose from. The two most popular by far though are the simple 'Siege,' where once team defends a fortification while the other tries to take it and 'battle,' a team death match where each player is only given one life. A shared part that makes both these game modes great though is the hundreds of players fighting it out all at once in each match.

Now with that all out-of-the-way, let's get right into the story of John Smith! 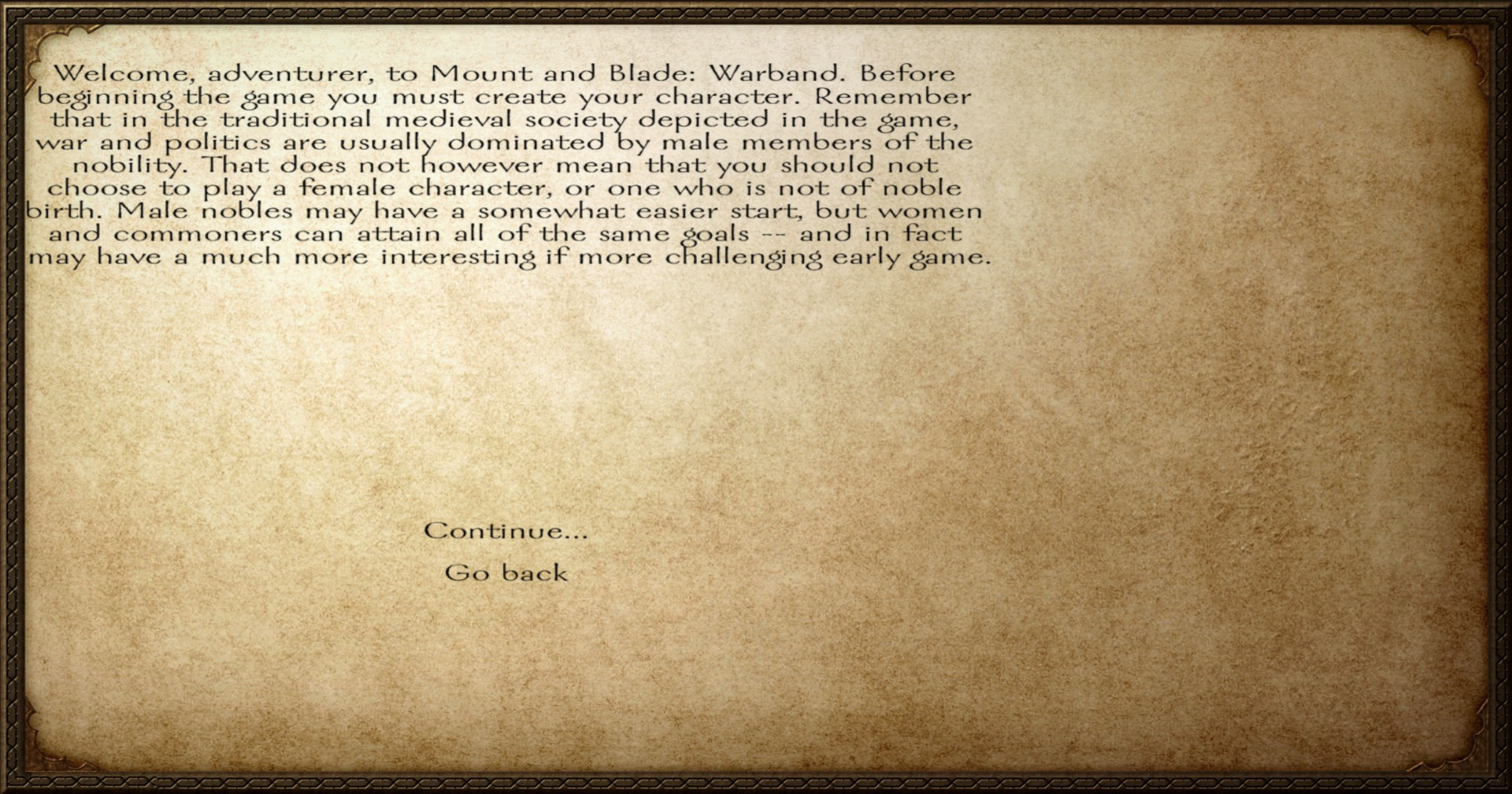 Here starts the story of John Smith, the cold-hearted killer on a hate-driven war path for revenge. He wasn't always like this though, so hateful. In fact, John use to be the opposite. He lived a good life in a local's lords keep as a child. His father earned his own and John's stay there by gaining the lord's favor as a skilled warrior. Of course John didn't live a life of luxury though as he wasn't nobility, but he didn't suffer in the real world like most others did, with lands cursed by famine, disease and bloodshed.

When John turned six he was taken as a page under a local knight and once thirteen turned into a squire under the same knight. He trained and fought along the same knight for the next seven years honing his skills with the blade. What John and all the others around him would soon learn though is that killing came natural to John. He never hesitated, never struggled in a fight and always against the odds found a way to slay his opponent no matter how dark or gruesome. John was a natural born killer.

Despite all this John was still a genuinely happy guy. Never held any grudges, always had a smile on his face. But everything changed when the Nordic raiders attacked. Everything John knew and loved was stripped away from him all at once. His lord was executed, his father and mentor slain in battle and his home destroyed. John luckily escaped the onslaught and later found out that the wrongs done to him were ordered by the Nordic King Ragnar. So on that day forth John swore that he'd one day get his revenge, kill king Ragnar and take away from him everything he had ever loved as Ragnar had done to John.

and John had found himself walking through the city streets of Praven early in the morning while most were asleep. Suddenly a man appeared from corner of an alley holding up a drawn bow to John.

"ALL OF YOUR BELONGINGS, NOW!" Shouted out the man. Little did the man know though that he was about to be robbed, robbed of his life. John easily side-stepped the shot before quickly raising his crossbow and in a matter of seconds putting a bolt between the robber's eyes. With a snicker John continued on his way as he slung the crossbow over his shoulder, spitting on the fresh corpse as he walked by. 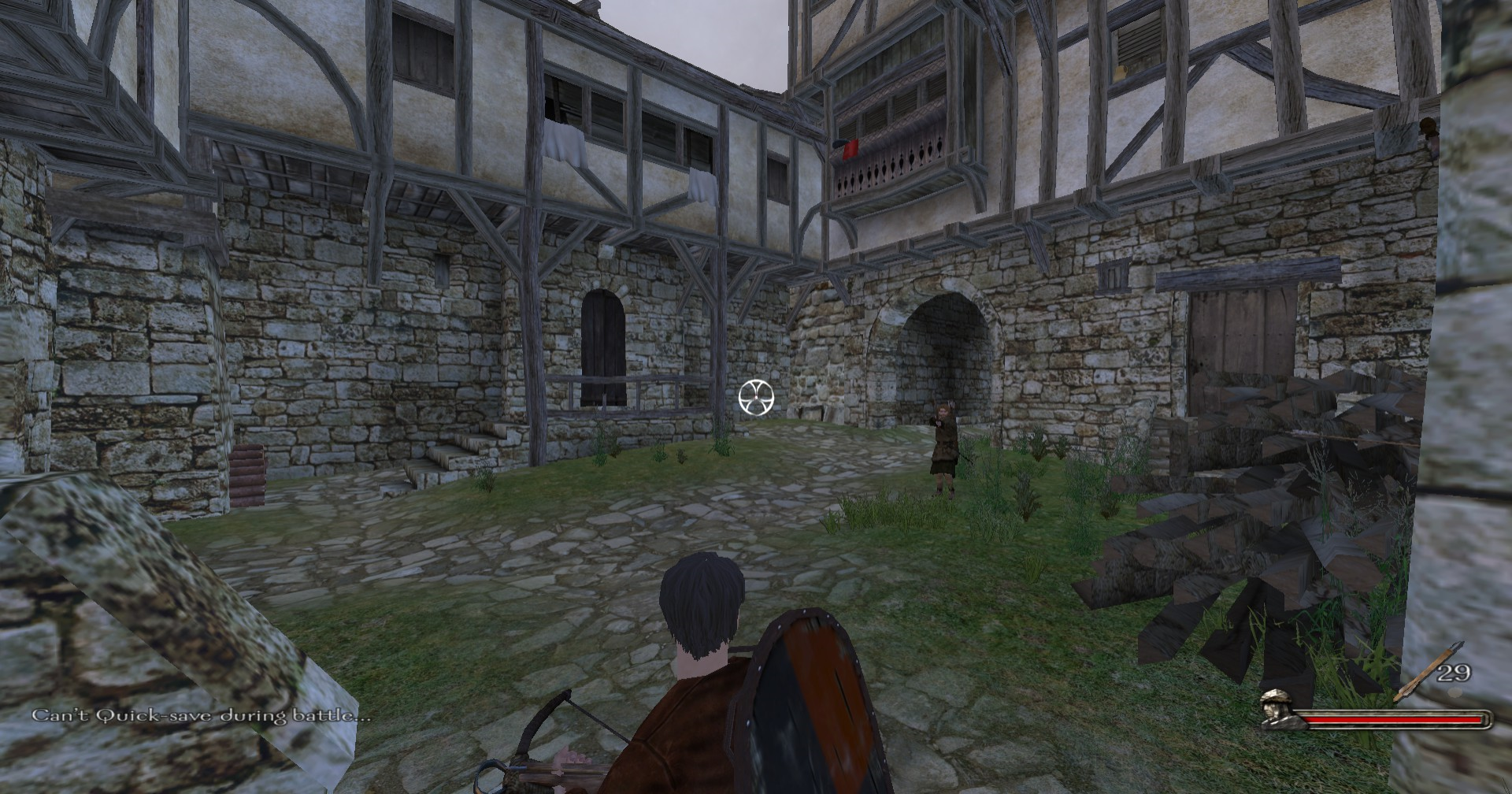 'Today was the day,' John constantly reminded himself as he walked out the city, the day John would start his mission for revenge. He had spent the last three years of his life working hard as a mercenary and saving up enough coin to start his own war band, a war band that he'd hope to train and grow large enough to wipe the Nords from the lands of Calradia. Most would think of any man stupid enough to take on such a quest as mad but John didn't care. He'd get his revenge on King Ragnar or he'd die trying.

The Kingdom of Swadia for the past year had been locked in a stale match war with the Rhodoks to the south where neither side could gain advantage over the other. But sides were too stubborn to call it quits though, so they continued to raise the tax on their people, conscript young men from their people and send them out into battle to die. Both their lands were thrown into disarray as bandits took advantage. Unsuspecting travelers were often halted and robbed on the roads by bandits. John was one of these travelers.

But he was no ordinary traveler. 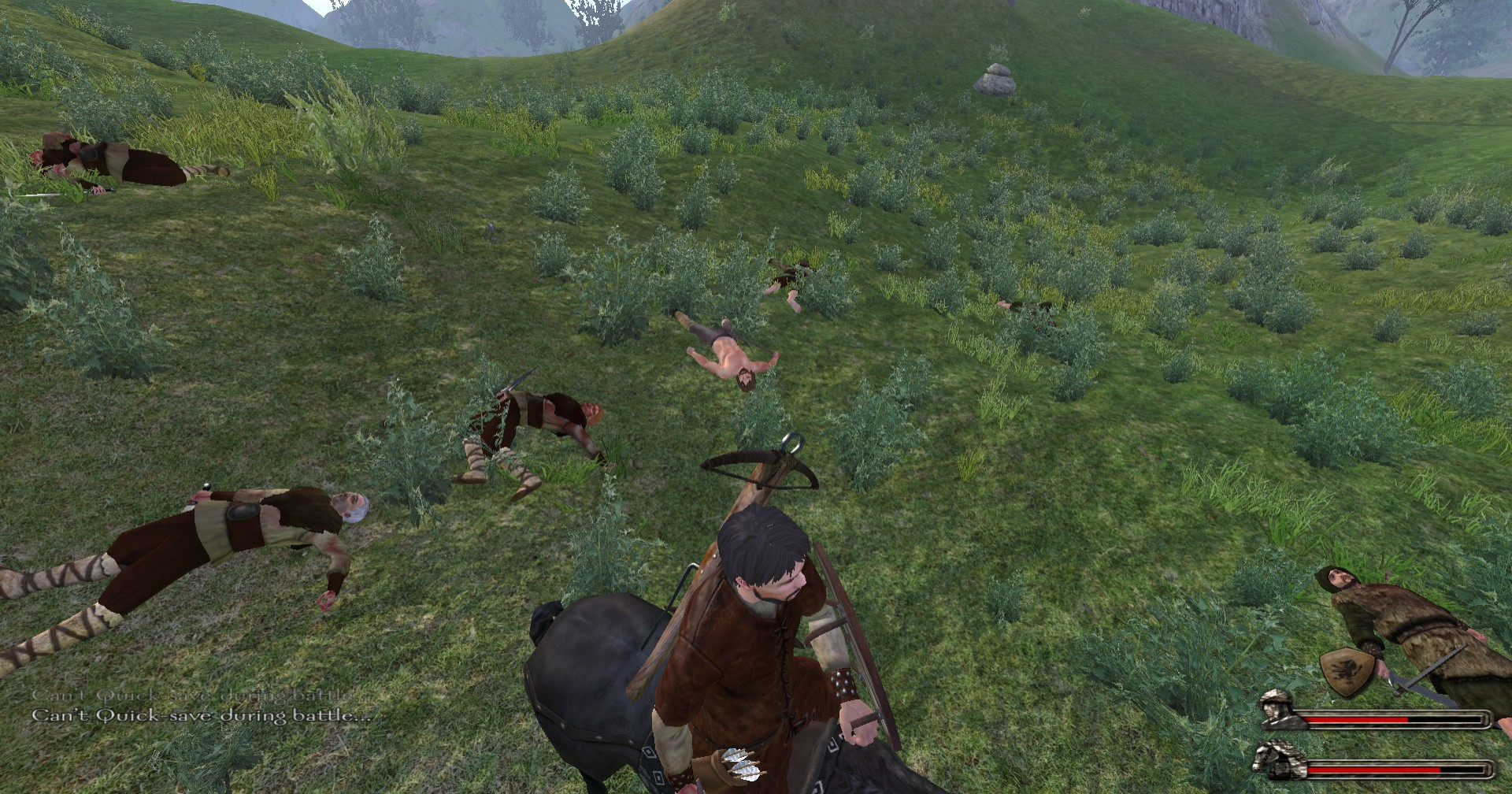 John went from local town to town recruiting and looking for men looking for work. He promised anyone willing to join his war band great fortune and fame, along with some straight up coin to sweeten the deal. Most wanted nothing to do with John or his war band, but in every town he went to John would find a handful of men interested in what he had to offer. After a few days of travelling, recruiting and repeating, John had finally thrown together a small war band of a dozen or so men. He began training his first wave of followers teaching them how to fight and act in battle. They weren't the best learners but John would eventually teach them none the less.

Once John was satisfied with his troops, he decided to take on a contract to deal with a small gang of bandits. He didn't take it for the coin though, no, John took it as a test to weed out his war band of the weak. As evil as the plan was John saw no better way of picking strong from weak. He gathered his troops together, gave them their orders and marched them out to the local gang's hideout where both sides met in open field ready for the fight ahead.

The battle was swift and one-sided. John's war band was a lot stronger than anticipated easily cutting through the ranks of bandits within minutes of contact. The cut-throats quickly routed before trying to retreat off towards the safety of the nearby forests but to no avail, as John mercilessly ran down the bandits as they ran atop his mighty steed. No enemy would survive. After the battle was won John ordered the corpses looted and stripped of everything which would be put into a stockpile later sold at the markets in Praven. 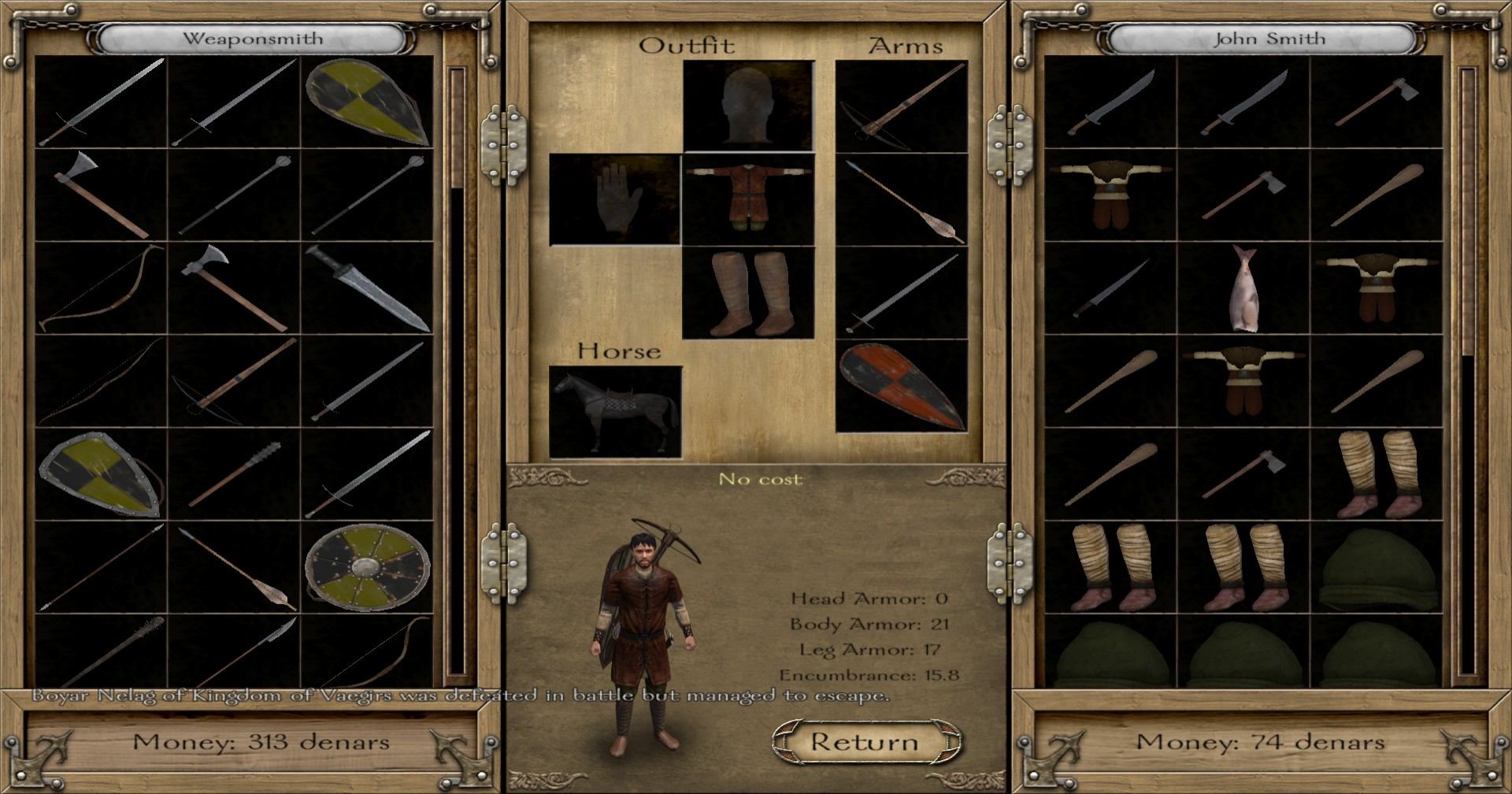 With the coin he got from the markets he'd stash most of it away to grow his army but decided to buy his troops some ale and rest at a local tavern. Perhaps John still had some humanity in him after-all. Then he killed a drunkard who challenged him to a fight for looking at him the wrong way. . . Maybe not. I hope you all enjoyed the read. If you want to say anything or have any questions feel free to leave a comment below and I'll be sure to respond as soon as possible. This is the first part in a long series I plan on starting based around John's life and my play through of Mount & Blade: Warband. Once again thanks for reading and I hope you all have a wonderful day. Submit
$43.13
26 votes
2
Authors get paid when people like you upvote their post.If you enjoyed what you read here, create your account today and start earning FREE STEEM!
Sort Order:
[-]
george-topalov (58)  ·  2 years ago

Man I haven't played mount and blade since it was just a small campaign with a battle simulator.. that was probably 8-9 years ago I was still in Highschool and didn'f even know how much it has developed. Would definitely give it a go and thanks for the nice read! An interesting rollplaying approach! Loved it!

Awesome i appreciate your work and effort you put in to this i am loving it while i reading it.