Arma 3: King of the Hill - The Lone Wolves What's up guys I'm ggteixeira and for today's post we'll be going through the story of one of my Arma 3 - King of the Hill game plays. In more specifics we'll be following me as I try to take control over the AO, 'tower 4.'

Arma 3 is a realistic near-future military simulator where you can fight as a soldier in the year 2033. King of the Hill is one of Arma 3's more popular multiplayer game modes where three teams fight over control of a designated AO on the map.

There are many different types of 'King of the Hill' game modes spanning from infantry only to everything goes. I played on a special server though where everything was allowed but certain aspects of the game were changed to enhance realism. This includes the HUD, voice communications, map markers and first-person mode only.

With that all out-of-the-way, let's get right into the post itself

I connected to the match halfway through and joined the my personal favorite Blufor team. Things were looking bad for us though. We were stuck in dead last and the Greens were tearing the battlefield up. What would you expect though when they apparently had both air and ground superiority over the AO. If things couldn't get any worse I didn't have any squad mates to go in with, so I'd be fighting solo with no one to really watch my back.

No time to moan or complain though as one of the transports just pulled up to base. I loaded in with about six other guys before the Hummingbird took off towards the AO. Things were real silent at first but some kid named Gold was about to change that. He gets his mouth up real close to the microphone and starts heavily breathing for an entire awkward minute before screeching out at the top of his lungs:

"THE KRUSTY CRAB PIZZA, IS THE PIZZA, FOR YOU AND ME!"

I watched and listened in horror as he went on like this for a few seconds before catching a bullet to his chest. He then proceeded to fall off the side of the helicopter and plummet down helplessly to his death below. The entire helicopter was getting lit up by gunfire from below! I ejected quickly and parachuted down to the war zone below. Some bullets whipped passed me but luckily none made contact. Some others weren't so lucky though as I watched a few comrades get shot out of the sky before they even got their boots on the ground. As soon as I hit the ground I unhitched my parachute before sprinting and diving into the cover of a nearby wall to my side. I found myself laying there silently for a few minutes as a wild firefight broke out from all around me.

When it died down I began crawling onwards towards my personal goal, tower four.
Along the way there I stumbled across another rogue ally by the name of Lil Timmy. Apparently Timmy here had been in the AO for over an hour now and just like me had plans to take tower four. Since we both didn't have a squad and shared the same objective we decided we'd work together, at least until we took tower four. Since Timmy seemed to know what he was doing I let him take the lead as I followed closely behind watching our backs as he urged closer and closer towards the tower. 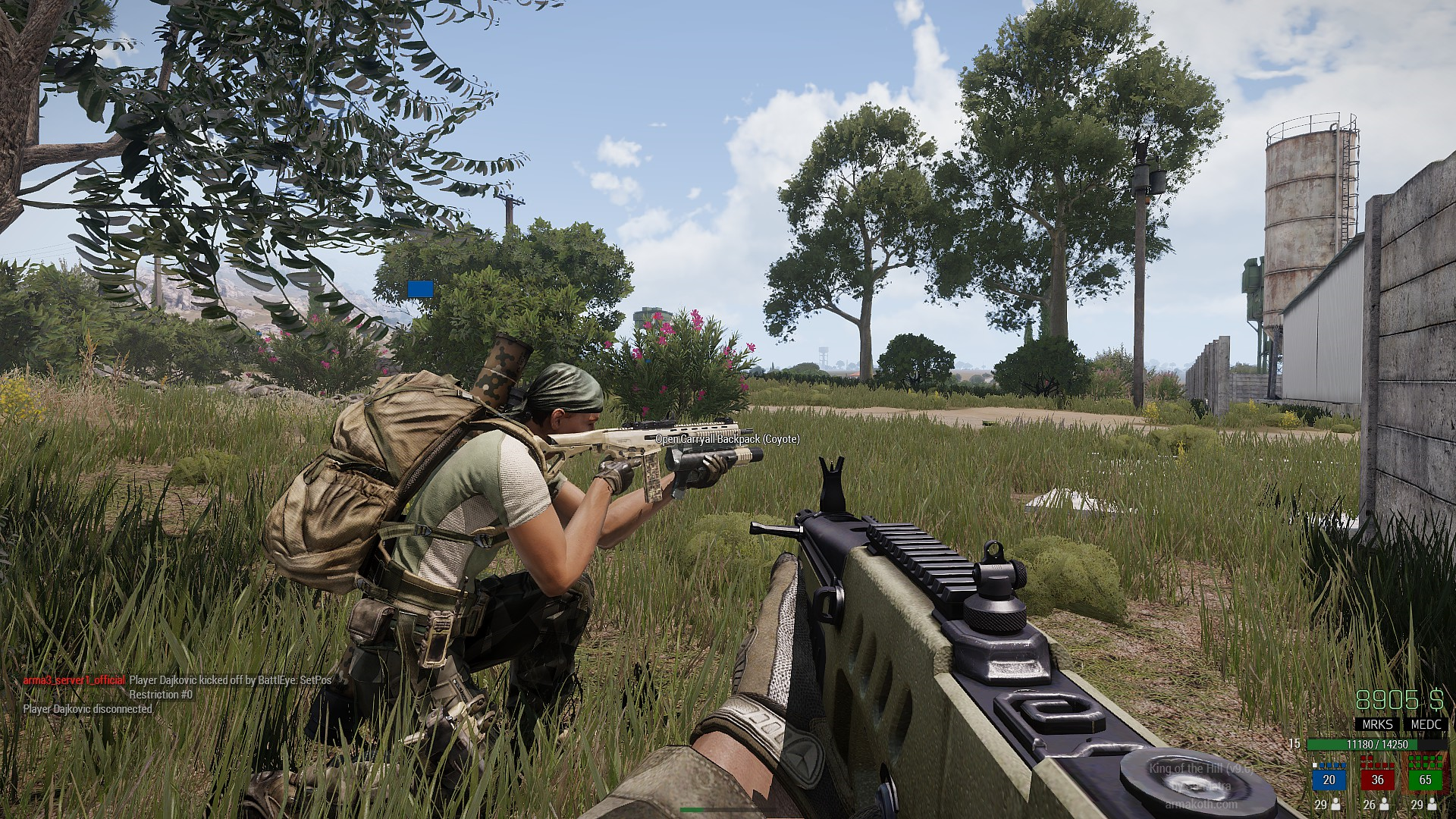 About a few hundred meters away from tower four we made contact with an enemy gunman on a local roof. I quickly raised my rifle squeezing the trigger as I lit him up with at least a dozen rounds. Timmy congratulated me on the kill before moving forward securing two quick kills of his own with only two back to back headshots. This guy really did know what he was doing.

As we neared the back of the garage we heard some inaudible talking coming from inside. Timmy looked at me and nodded as I raised my rifle aiming towards the door. He then proceeded to kick it open and step to the side as I rushed forward unloading. The guy inside didn't stand a chance as he fell over dead but neither did I. An enemy soldier hiding behind a tree managed to fire a round into my chest and down me. Timmy saved me though as he quickly took the guy out before he could finish me but then all hell broke loose. Gunfire starting breaking out from all around. Timmy dragged me to the side and hugged the wall peeking out only to be quickly suppressed by a flurry of bullets. I started to lose consciousness as my vision blurred.

I could hear Lil Timmy shouting at me to stay with him as the bullets continued to unload. The shouts of a dozen men were heard outside as the enemy began to enclose on our position then it happened. An artillery shell landed right on the house and everything went black.

The mission was failed, but we'd get 'em next time. 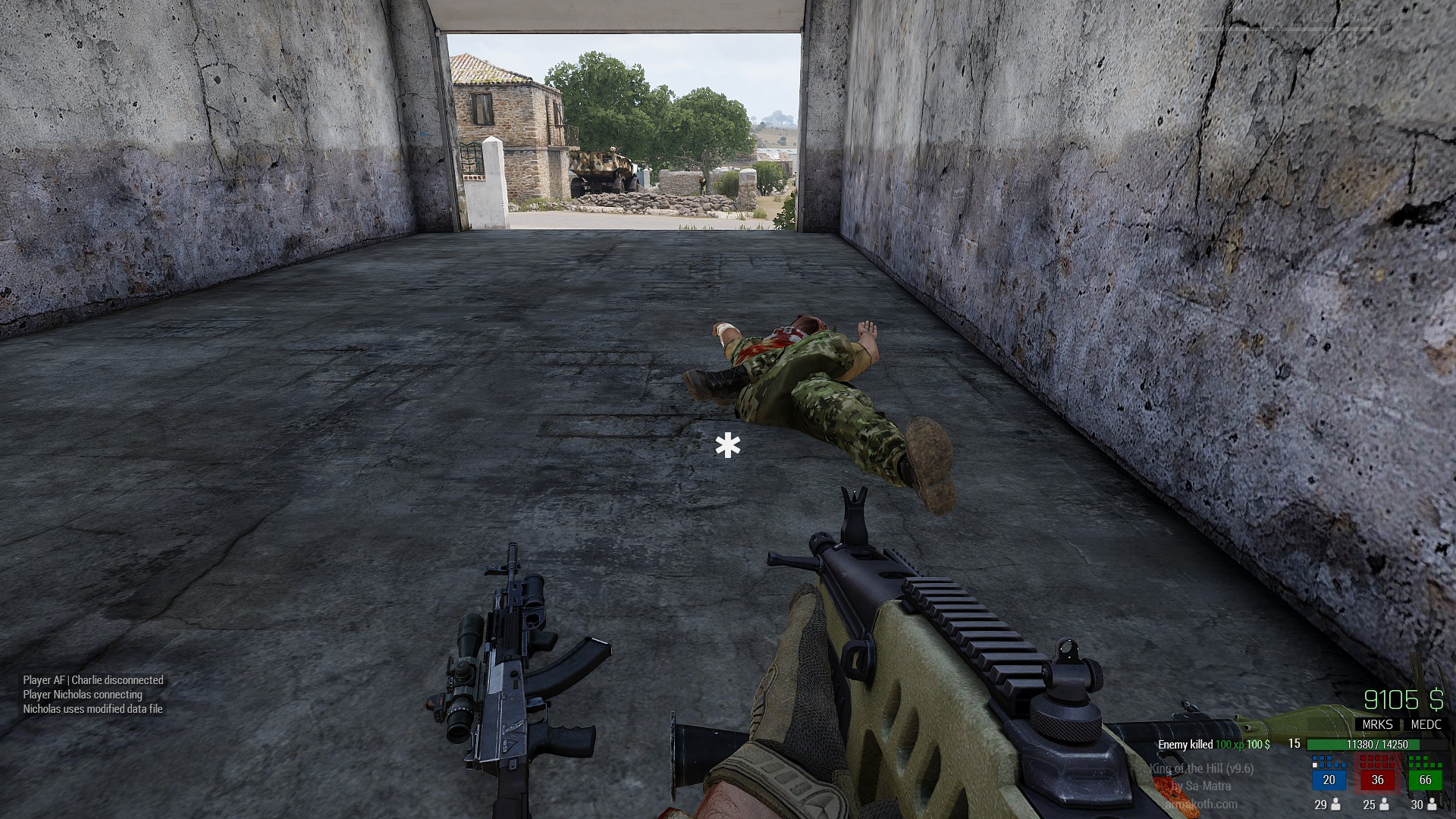 I hoped everyone enjoyed the read. If you have anything to say or have any questions feel free to reply below and I'll respond as soon as I can. Once again thanks for reading and I hope y'all have a wonderful day. Submit
$5.56
12 votes
2
Authors get paid when people like you upvote their post.If you enjoyed what you read here, create your account today and start earning FREE STEEM!
Sort Order:
[-]
thecynic (45)  ·  3 years ago

Looks like a great game to spend some time on is it available on steam?