Neverwinter Nights (Not the MMO): Module "RTS - Harvest of Souls" 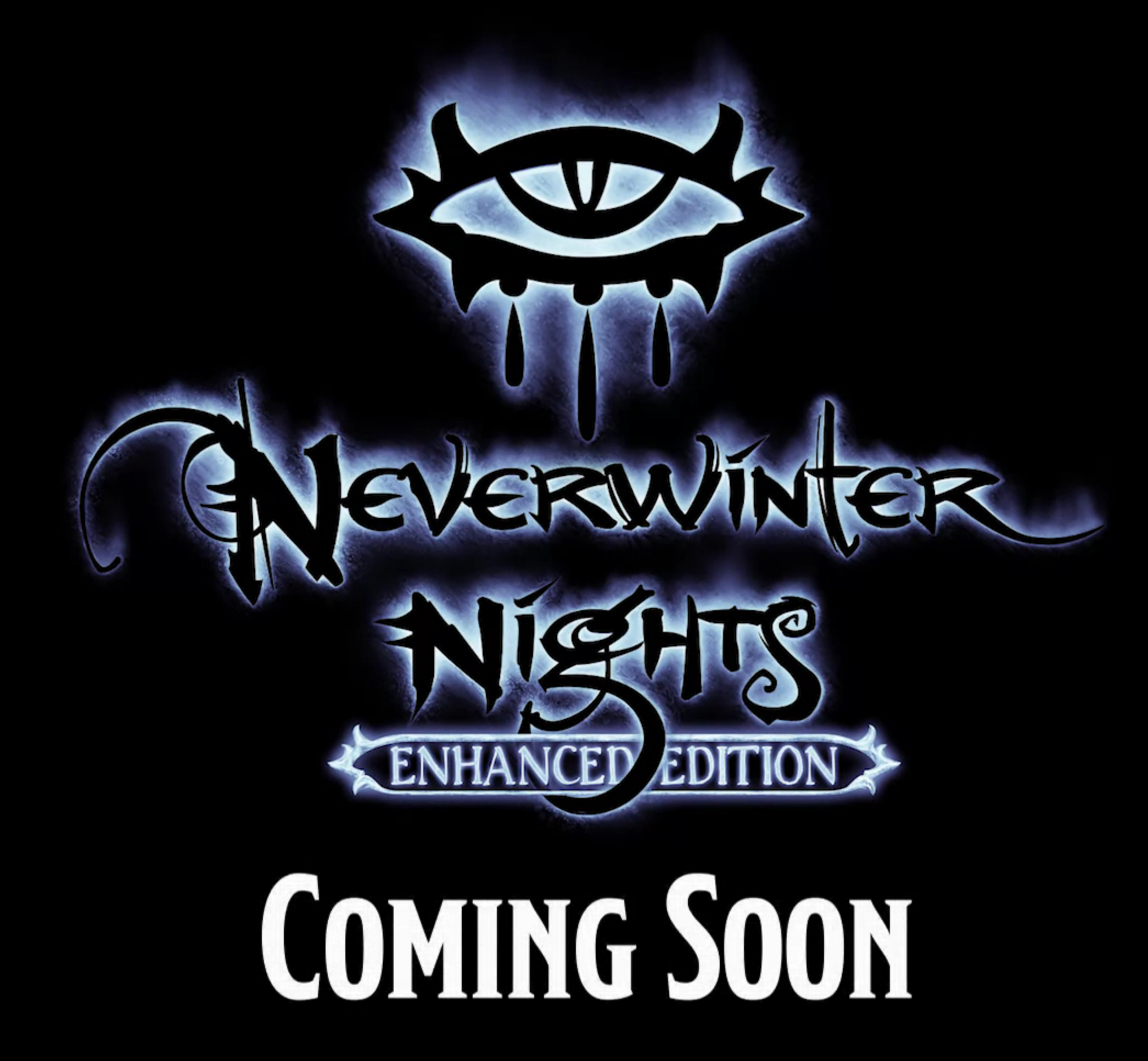 With the post I made yesterday that Beamdog is working on Neverwinter Nights: Enhanced Edition I thought perhaps I should do a post about my favorite thing I made in Bioware's Neverwinter Nights 1. This is my favorite thing even considering I worked on the DLC The Wyvern Crown of Cormyr and am in it's credits, or that if you look at the official scripts for ridable horses and other things as of the 1.69 patch for Neverwinter Nights you will find my name in the credits because I was the one that made those scripts for the horse systems in both The Wyvern Crown of Cormyr and 1.69. I also authored NPC ACTIVITIES which was one of the more popular script systems for module makers. Even with all of those things my favorite project is titles RTS - Harvest of Souls.

This project began as many of my projects begin as a "What if..." type of scenario. I though I could build a small map with four teams and make it so you could create and command armies. Yet, that really was just barely scratching the surface.

I actually had a basic prototype of that working within a couple of days. I showed it to my friend Jeremy Greene and he liked it, saw potential, so started helping me with it. His focus was primarily on balancing the teams. He did other things but that is where it went.

At this stage there were 4 teams and 4 players could play. They had to be on opposing teams. It was quite fun, and had a bit of an addictive quality. I really like random maps for things like diablo and random loot drops and I wanted that in the game so I came up with the idea for artifacts which are randomly placed around the game world when a game is started. Each item has a guardian. Jeremy helped me come up with ideas for a lot of the early artifact types.

This added a bit of a drive to explore, and the fact that mana is an important resource too which you must explore to secure.

The game essentially had three resources. Mana, Gold, and Souls. If you killed certain soul bearing units in the game world they would drop a soul token. You could put these into a soul well in your lair and it kind of was like points to the game. One of the victory conditions was to reach a certain amount of souls first. We later added other types. Mana on the other hand consists of finding Minor Mana Pools, Mana Pools, and Major Mana Pools. You can convert those to a mana crystal which you can carry. Eventually we made it so you can only carry them one at a time. If you take them to your mana vault in your lair and drop them they would become a mana pool of that size there. In the game an hour passed in 2 minutes and you received mana that you could use every hour based upon how many and what kinds of mana pools you had in the mana vault. This is another reason to explore. Some units would give you taxes each hour and that goes into a chest behind or near the throne.

NOTE: Other players can sneak into your lair and steal mana pools (one at a time), and loot your tax chest.

These resources were used to construct and build units. In general to produce a unit that had a soul required that you had a soul token stored in the soul well that you could use. Some teams were more dependent upon souls than others.

The concept of the game (which actually came later due to this being a prototype that took on a life of its own) was that long ago the gods had been banished from the world during a large war between the gods. You (yes, you are a god) have found your way back to the world and you are weakened. The battle resumes.

Over the years (yes, I spent thousands of hours on this) I kept adding more and more to it. Eventually I lifted the player cap and made it so multiple people could play on each team, but only one could be considered the leader. Then I wrote an AI for the teams which I kept improving over the years. So you could play it single player with AI opponents (the options available at game setup were insane in their quantity), you could also play as a bunch of human players on a team together against intentionally tough (cheating AI) AI teams so it could be crazy hectic. You could turn off certain teams, you could have two human teams, and two AI teams. You could even have hybrid teams with part human players and part AI players. The map continued to grow, quests continued to be added, features continued to be added.

I made the world incredibly reactive to what players did in the world. There were so many possibilities that I remember after it had been out for five years on player saying, "I was playing it the other day and X happened. When did you add that?" In that case I told him "That's been in there since the beginning."

There are people here on steemit who used to play this with me. @kidsysco is one of them. I will say that I had several players of RTS - Harvest of Souls pay me what I consider to be the ultimate of compliments. I had variations of "This is the best game I am ever played, and I am not talking just modules, this should be considered a game of it's own."

To make that module I pushed the Aurora Engine to it's breaking point. In fact, it is at times an unstable mess due to how much is going on. I had to write routines to try to recover from when the engine failed to achieve something. This meant errors occurred while playing. My job was to make them as unnoticeable to the players as possible. I was always pushing the barriers on the limits to the Instruction Sets for scripts and getting TMI errors which my systems would adapt and recover from.

This became more a factor when I made AI players that were exploring the world, creating their own units, and attempting to win. Neverwinter Nights was not designed to do that, but do it I succeeded in making it do.

Now I will say I am a fan of making games that I the game developer can play as well. This means while RPGs are certainly one of my favorite genres of games I do not make linear games. This means telling a story is far more difficult. I have been making emergent titles going back as far as I can tell. Games with random elements, and things that happen due to player actions and change the world. Those are what I make. Why? Because I can then play them without knowing the entire story and what to do at the beginning. This also makes the projects a lot tougher to balance, and fix bugs on. When you have fixed quests, and stories those are much easier to troubleshoot. This is why that is generally exclusively what AAA game studios make for RPGs. I love to play them, but as part of The Wyvern Crown of Cormyr team I can tell you that once you've played the same scenes OVER AND OVER again to make sure the bugs are there, and then to regression test to make sure you didn't introduce bugs, you are not excited about playing the game yourself. You are excited to release a completed project and say "I made this!" but, it is not something exciting for you to play as you know the story, you know the answer to all the puzzles, and there is no wonder.

This is why I make emergent titles with random elements. I will say without question RTS - Harvest of Souls is the most successful project I have ever made when it comes to this. I get the urge to install and play this module at least once a year. When I do, my family usually will get the urge too and all of us will play it for a week or more straight.

Now I do hope to fix that. That is something I'd like to make myself. Though I don't want to mod anymore as working thousands of hours on a project and not being able to charge any money for it is something I decided not to do anymore.

Now with the release of Neverwinter Nights: Enhanced Edition looming from Beamdog, I WILL try to make sure that RTS - Harvest of Souls can work with that.

Some things about the module. It is really an open world type situation. It doesn't hold your hand and tell you what to do. This means a lot of people never REALLY experienced what it offered.

It is one of those games that if you play once, then play it again that there is a good chance you'll be hooked. Yet, the majority of people likely never played it that long as it was VERY different from standard Neverwinter Nights fare and without the hand holding it could be confusing initially about what to do.

Ultimately you could LIVE, and do things. I did add some more tips and help over time, but since the story was basically cobbled on as an afterthought it did have weaknesses in that area.

In reality the world was so reactive that once you knew how to play it the world created a story with you, and based upon your actions. It didn't require other player's actions to create contents but if there are other players then the effect is amplified. While it could be played single player it truly shines when played multi-player.

As I do plan on making a successor to this from scratch, and I have all the assets now to do it, and since I want to make the original work with NWN:EE I also wanted to preserve the documentation about the original here. The above map is how it began with a 3x3 grid above ground, and a 3x3 grid below ground for each of those areas. It expanded from there a great deal. By the time I was done EVERY door in the game actually went somewhere. If they were locked, magic of picking them might open them and they would go some where, so there were no truly impassable doors anywhere in the game. 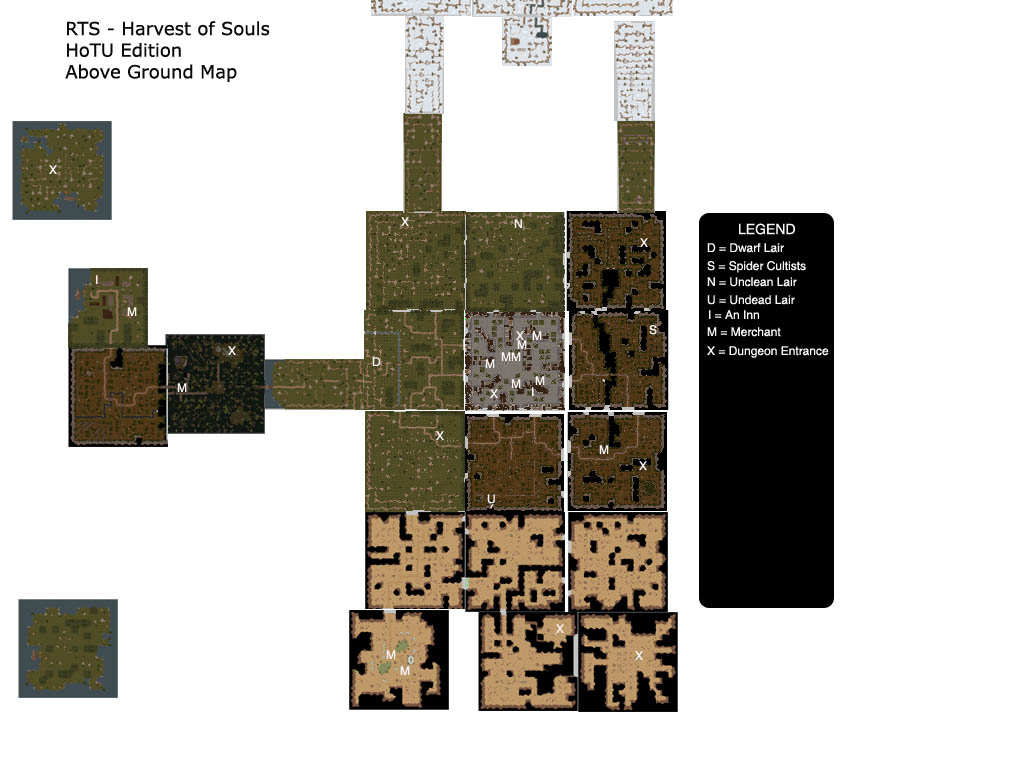 It grew to that size after awhile, but that still wasn't the end.

Above Ground - Central Area : AKA The City As it started I will likely make some posts of old documentation and strategy guides related to RTS - Harvest of Souls. They won't mean much to people who haven't played it, but this is one of the beauties of the Blockchain. Preservation.

Here are some tutorial videos made by a fan - You have to read what he is typing IN GAME as he plays.

If you have Neverwinter Nights and want to try the version before I've messed with it on NWN: EE it can be downloaded from NWVAULT here. 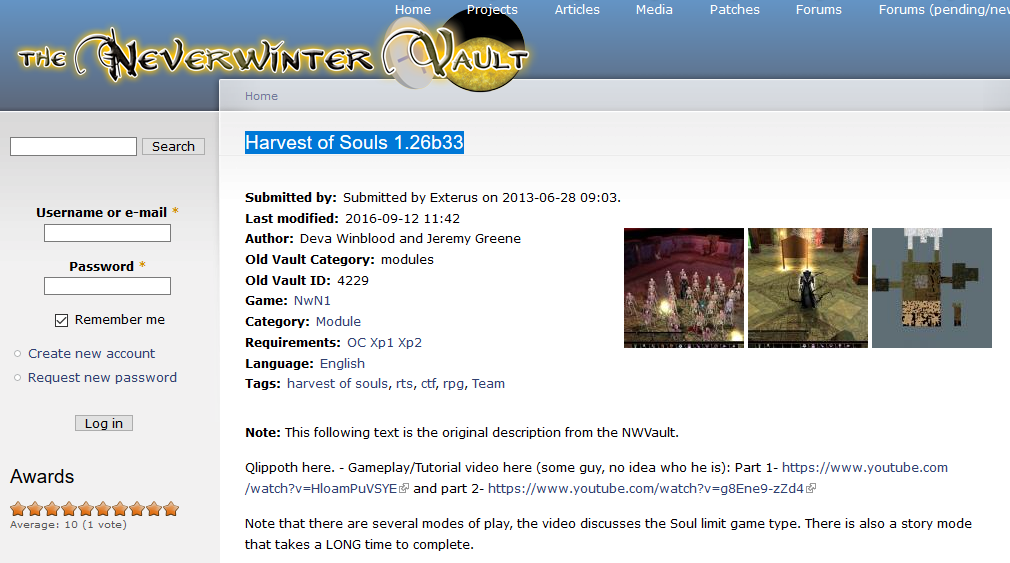 waiting for more from you dwinblood! keep motivating!

nice gaming design, i like this, thanks for nice game design

@dwinblood great post dude thanks for clearing up the confusion the other day. Keep it up.