Hello to all Hash Rush investors and soon-to-be players!

October 2017 saw the end of our successful ICO, and a lot of things have happened since then. The game has made tremendous progress which we can’t wait to show you. We also have announcements about our internal company structure, getting Rush Coin on exchanges, and a whole lot more. We hope you enjoy this update on what we’ve been up to, and our plans for Hash Rush in 2018!

A Look at the Pre-Alpha

The team at Tractor, Set, GO! has been working tirelessly on the pre-alpha, and we're thrilled to see it launch today. For one month, until 18 January 2018, gamers from around the world can play the very first version of Hash Rush. This means that Pre-ICO participants, ICO participants of the first three days, and winners of the Hash Rush Creative Competition will be able to get their first experience of running a mining colony in the Hermeian Universe.

Qualifying investors can register for pre-alpha access by following this link and we'd love to hear your feedback on our forums!

Please note that the pre-alpha will be playable in both English and Japanese. We're currently aiming to launch the Japanese version by 29 December.

Our in-game currency, Rush Coin (RC), is now tradeable on EtherDelta (check out our Quick Start Guide). We're currently in talks to get RC on more exchanges, as well as to have it listed on CoinMarketCap. As soon as we have more news, we'll let you know!

Thanks to our thousands of investors, the Hash Rush ICO closed with a total of $1.836 million raised. We are eternally grateful for that, so thank you! And seeing that both Bitcoin and Ethereum prices recently saw a significant increase, the ICO funds have allowed us even more runway for Hash Rush's development and the growth of the mining farm which will support it.

As this project has grown from strength to strength, we have made a change in our organisational structure by incorporating our new company, VZ Universe, in Estonia. Hash Rush will be produced by VZ Entertainment, one arm of VZ Universe, who are working closely with the talented team at Tractor Set GO! 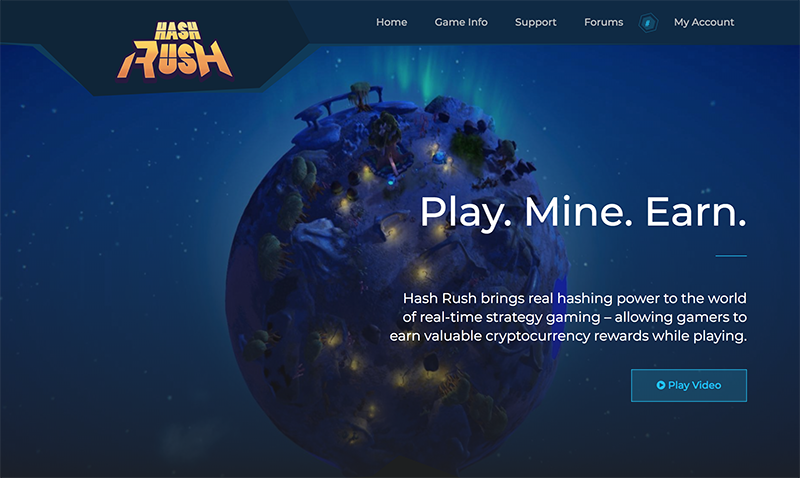 We’ve also given our website a full facelift as we head full steam into game development mode — and our team are putting the finishing touches onto our official forums: a place where the community can come and discuss Hash Rush, its pre-alpha, and more. Please take a look at our website and tell us what you think!

2017 really set the gears in motion, but 2018 will of course be a monumental year for Hash Rush. After ending the pre-alpha on 18 January 2018, we'll start working on all the feedback that we receive from our players to keep making the best game we can as we ramp up for launch in Q3.

We’re also planning to bring Hash Rush to a number of major gaming events and expos around the world next year, where attendees will be able to get a hands on and play the game for themselves. Plus, we are looking into other options to show the game to a broader audience before release.

And of course, the team is still growing and we will be hiring additional talent in the areas of game design, customer support, and marketing. Keep an eye out for our vacancies!

Bringing the Gaming and Cryptocurrency Mining Worlds Together

With Hash Rush we want to introduce a new audience to cryptocurrency mining. We're very excited to announce an entirely new game model that does just that. In short, we've created a subscription model that mimics the real-life process of cryptocurrency mining. Players pay a monthly subscription which signifies the costs required for electricity and new hardware, as if you would run your own mining rig. Building your colony, you compete for a share in the prize pool relative to how well you did in mining the in-game Crypto Crystals. You could see this as a mining pool, where every miner gets paid a share according to his performance. And the Crypto Crystals themselves? Well, those represent all the work that your mining rig puts in!

Aside from being a cool metaphor, the new subscription model also ensures that the overall prize pool allocation grows every time a new player joins Hash Rush. This means that there are permanently more mining rewards on offer as our player base grows. This makes Hash Rush truly a competitive game, all the while ensuring there's a viable business model in place. We're planning Hash Rush around competitive seasons with many bonus challenges and objectives along the way, and will have much more to reveal after pre-alpha. So stay tuned for that!

All in all, 2017 was an incredible year for Hash Rush. With a successful ICO, great pre-alpha gameplay, and hundreds of excited players, we couldn't have wished for more. Especially when it comes to the Hash Rush Community, we're very happy. We were blown away by the entries for our Creative Challenge, such as Pepe Hiller's amazing 3D-printed and hand-painted Ernacks shown here. Thanks to everyone who took part! We also continue to see a lot of interesting discussions on our Discord channel, ranging from in-game lore to crypto trading strategies... So if you haven’t already, come meet our awesome community over on Discord. The devs are often online and ready to answer any questions you may have.

Thanks again for your support in making this project a reality. We truly hope you enjoy the pre-alpha, and can’t wait to hear your thoughts.

Wow this game sounds veeery interesting :)
Sad it will be available only in Q3 :(

There will also be some beta versions for the fans before the full release as well, so keep following us here and join us on Discord to make sure you don't miss anything!

its an awesum concept.
hope the developers make a cunning idea to introduce people who have craze for playing games rather than people who only have money but no time.
just like Steemit :)

Thanks for your comment! We are taking that into consideration, actually, the core feature of our game is that you need to constantly develop your base.

This is because, if you want to get more crypto from the prize pool, you need an efficient mining operation. People that just log in, do a basic set up and then forget it until the first cycle ends will get very little. In this way, the game actually rewards activity.

but its very true that I love your Idea. You idea has very great future I couldent invest because I am developing at cryptos :)

i can't wait to play this game at least to try it ! :D

Thanks for the interest. We're really picking up on the gamers front now, so it's always awesome to see people like you interested in Hash Rush, shows we're doing something right!

This pre-alpha is pretty closed up (fundraiser promise) but there will be a beta version for testing before we do a full release, so if you can't get in just yet, hang around chances will come!

This sounds awesome! As an avid gamer and just discovering cryptocurrency and altcoins, this looks like I would give it a shot.

Really great to hear you like the Hash Rush project! Be sure to follow us in order to stay up to date with all the latest news from Hash Rush!

This post has received a 6.07 % upvote, thanks to: @hashrushgame.

This post has received gratitude of 1.50 % from @appreciator thanks to: @hashrushgame.

This post has received a 6.99 % upvote from @boomerang thanks to: @hashrushgame

I am looking forward to virtual world gaming systems. Second Life has been around for a long time, but it is lacking a true currency to go with it. The Linden Dollars should be held to the same standards as other cryptocurrencies are.