What's up guys, I'm ggteixeira, a relatively new user to Steemit who loves reading posts and making his own, mainly around games I play. For today's post we'll be looking over my first-ever playthrough of the game Empyrion - Galactic Survival. What is Empyrion - Galactic Survival?

Empyrion - Galactic Survival is an indie-developed space survival adventure game where the players goal is to survive, thrive and explore the vast unknown. There are tons of things to do in this game and tons of different ways to play through it. Whether you choose to be a simple explorer or a Galactic Warlord is all in your hands and up to you.

Now with all of that out the way, let's get right into the game 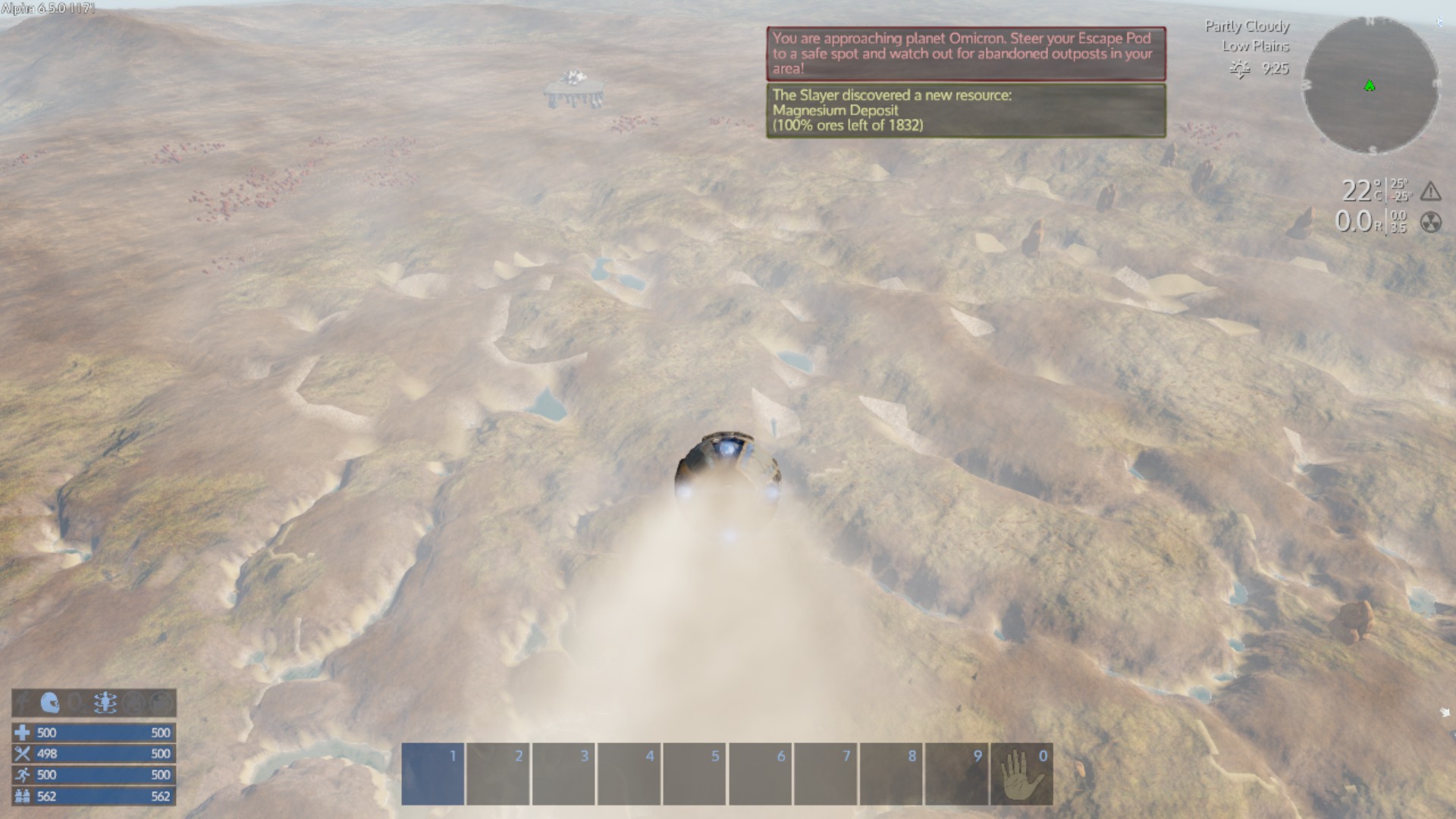 At first everything was black, then a sudden flashing light followed by violent shaking as my pod plummeted down out of the sky towards the barren lands below. Everything went black again for a few seconds and the shaking stopped. The silence was broken by a sharp hissing sound as the pod's metal door creaked opened slowly before bursting out all at once. Off in the distance there was a cackling sound growing closer and closer. I stepped outside of my pod looking up towards the sky. The sun's rays were bright and blinding at first but my helmet quickly adjusted. Another pod was falling out of the sky.

One hundred and fifty rounds, not bad. I slide in my first magazine before glancing up and off into the distance. 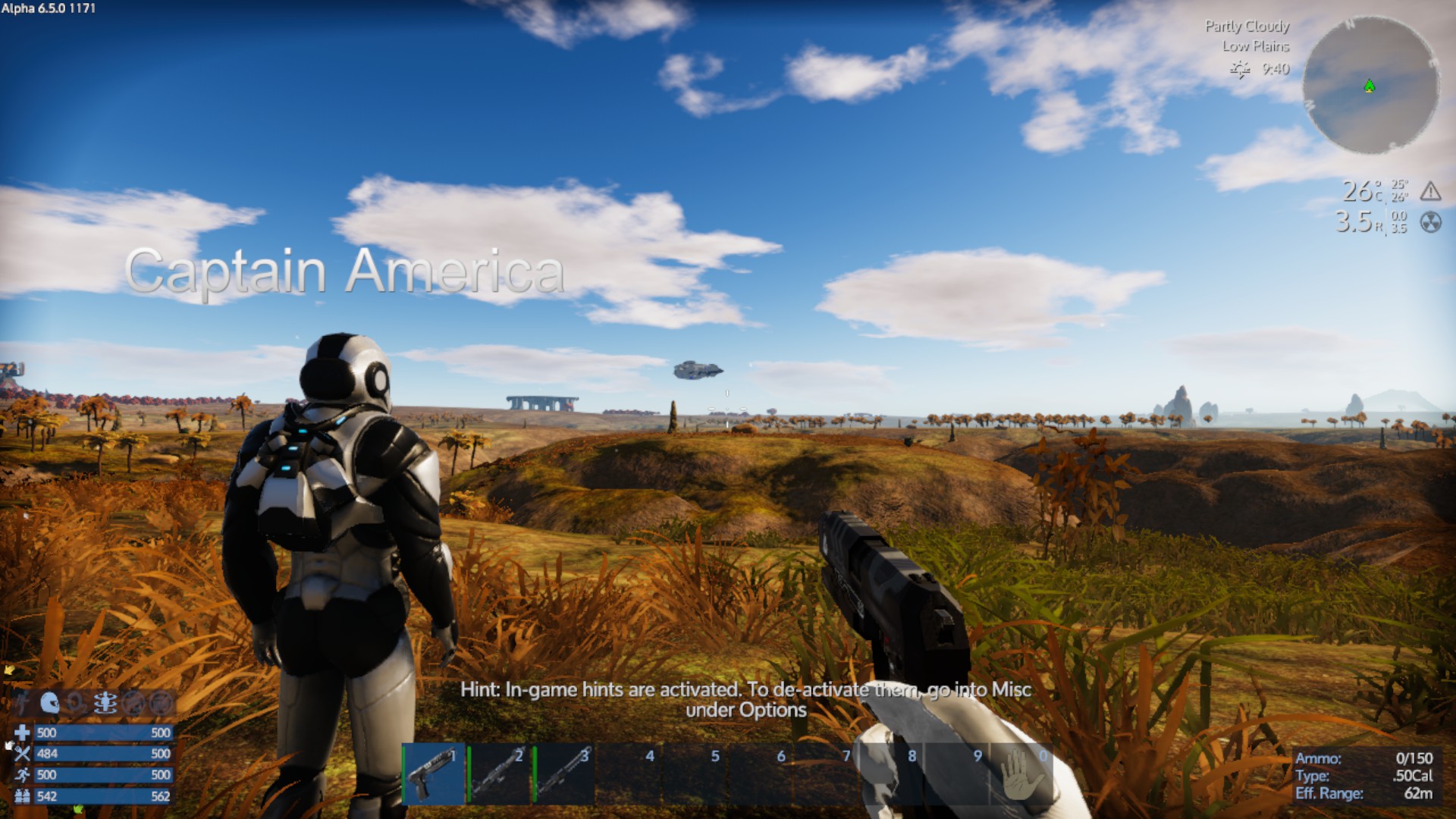 "They're coming to finish the job." Muttered the Captain. "Let's get a move on, spotted a building two clicks east of our current location."

Couldn't argue with Captain, he's the Captain for a reason. With no time to waste we set off towards our destination. Wasn't much to look at on the way there. Just holes, dirt and a lack of trees in every direction. Was there even any life on this planet? I know there's water in some of the holes. . . Who even cares, got my trusty 9M right by my side. Building turned out to be an old abandoned outpost. Had enough rations to last the two of us maybe a week but more importantly a radio tower we could use to call for backup. Thing is it was broken and needed to be repaired. Nothing I couldn't fix though, just needed to find the right parts. After a bit of searching it hit me, I wasn't finding the parts, nope, had to make them instead. Guess it's time to get drilling for ores, one thing this rock's full of.

Once I had mined everything I needed it was time to head back to 'base.' Had the entire thing to myself too. Captain was out and about scouting around. Waste of time in my opinion but he's certain he'll find something we can put to use.

Sat around for a few hours before suddenly noticing a small figure appear off in the distance. It's Captain, but wait-- What's that behind him? Those weren't no normal arachnids, no sir-e. I always hated bugs. Within seconds my pistol was drawn as I unloaded the first magazine into one of those things. What? It's still coming. Fired off a few more rounds, nothing. Oh no, it's got Captain. . . It's friend spotted me-- How does it move so fast!? Com'on, reload, reload!

And at that moment I realized, I messed up My thoughts on the game

The second I fell out of the sky in that pod I knew I was hooked. Most survival games I've placed are either medieval or post-apocalyptic in setting. To play a survival game set in space was truly a breath of fresh air. There's so much stuff to do in this game and so much more to discover. Best part about this? The game's being actively with new content being added in every month!

Empyrion to me is a sort of 'No Man's Sky' that actually has in it most things that 'No Man's Sky' was promised to have but didn't. The multiplayer is tons of fun as you join a server surviving in a world with other players who can either co-exist with you, work with you or my favorite, try and kill you.

The game plays great, the crafting is amazing and the survival aspect of it all is on point. There's so much to explore, so much to build and so much to conquer in space. You can build your own custom ships, bases and so on as you try to make your mark in this vast world. Tell me that doesn't sound cool?

If you're into space and enjoy survival games then I definitely suggest picking on Empyrion on Steam for only 20$. Trust me when I say you won't be let down. I'd like to go ahead and thank everyone for reading, I hope you enjoyed. If you have anything to say about the game feel free to leave a comment down below but please don't spam. Once again thanks for reading and I hope y'all have a wonderful day.

Submit
$7.22
14 votes
2
Authors get paid when people like you upvote their post.If you enjoyed what you read here, create your account today and start earning FREE STEEM!
Sort Order:
[-]
timbo (64)  ·  2 years ago

I absolutely love this game. It is one of my favorites.

I bought it a long time ago before most of the current features were included. This was one of the many games I had high hopes for but one of the few that has consistently come through.

Good review and good luck in your gaming adventures!
@Timbo

Empyrion is a very good games, even better if playing with friends!