It's monday/tuesday and time for my diet cheat days which means it's time to make some more pizza. I finally bit the bullet and bought a pizza oven! It wasn't super expensive but I'm very happy with the first batch of pizzas that came out. I'm still learning how to use the oven, and honestly I'm a bit afraid of it because it's so much hotter than anything I'v ever worked with before but it's all so exciting! I'm being very careful though so don't worry :P I'v modified my pizza recipe once again to promote more browning. In my old oven it didn't seem to help at all but it's browning extremely well in this new oven. 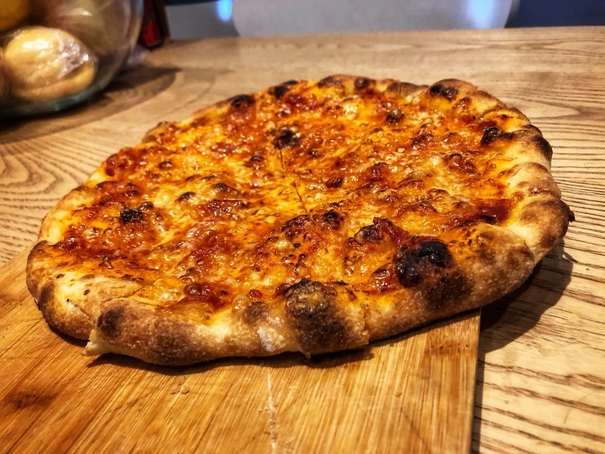 What I'v learned so far

I like to write this section because it helps me work through what was good and what wasn't. It helps me reflect on the pizza experience and figure out how I'm going to change my pizza next. I'v learned a lot since my last pizza post. I went to reddit and had some very insightful posters help me troubleshoot some of my problems. My roommates also gave me some advice on what they personally want in a pizza and it really helped me shape my new pizzas a lot.

With this new oven I learned some very important lessons and for any amatuer pizza maker like myself, I can't urge you enough to really research everything involved with a pizza oven if you decide to uprgade your hobby. My new pizza oven is amazing, I really love it but it is also scary. I tried to make a pizza in it without a pizza peel because I was too excited and impatient to wait for my peel to arrive the next day. I melted my oven mitts and almost burned myself trying to get the pizza inside. It was really dangerous and I'm very lucky that I didn't accidently touch any of the sides while trying to adjust the pizza in the oven. Only use a pizza oven with a pizza peel. Do not try to be crafty if you're an amatuer, it's dangerous and you could get hurt.

With the saftey warnings aside, it's time to reflect on my new pizza!

Some of the good folk at reddit helped me figure out why my dough was rolling out really thin in the middle and I spent a good couple hours watching hand tossing videos on youtube to learn! It was a lot of fun but a little scary because I was worried I'd poke holes in the dough. Luckily, the dough was super pliable and didn't tear and it was a lot of fun! I didn't actually throw it up in the air but instead spun it around on my fingers until it was pulled to the size I wanted it. The dough came out very well and not thin at all so i'm really happy with it! The pizza oven and peel

My new pizza oven was a whopping 100$USD, it's extremely cheap for a pizza oven I know but in China most ovens ranged from about 150-500$ USD. I just picked the cheapest one I could find and it was on sale. I was worried it would suck or have some kind of problems but so far it's working far better than I imagined.

It has a stone floor inside it and gets up to 350C which is almost 700F! The oven door locks in place to help keep the heat in and it only takes about 20 minutes of preheating to get this bad boy extremely hot. It can cook up to 14in pizzas and takes a really long time to cool down lol. 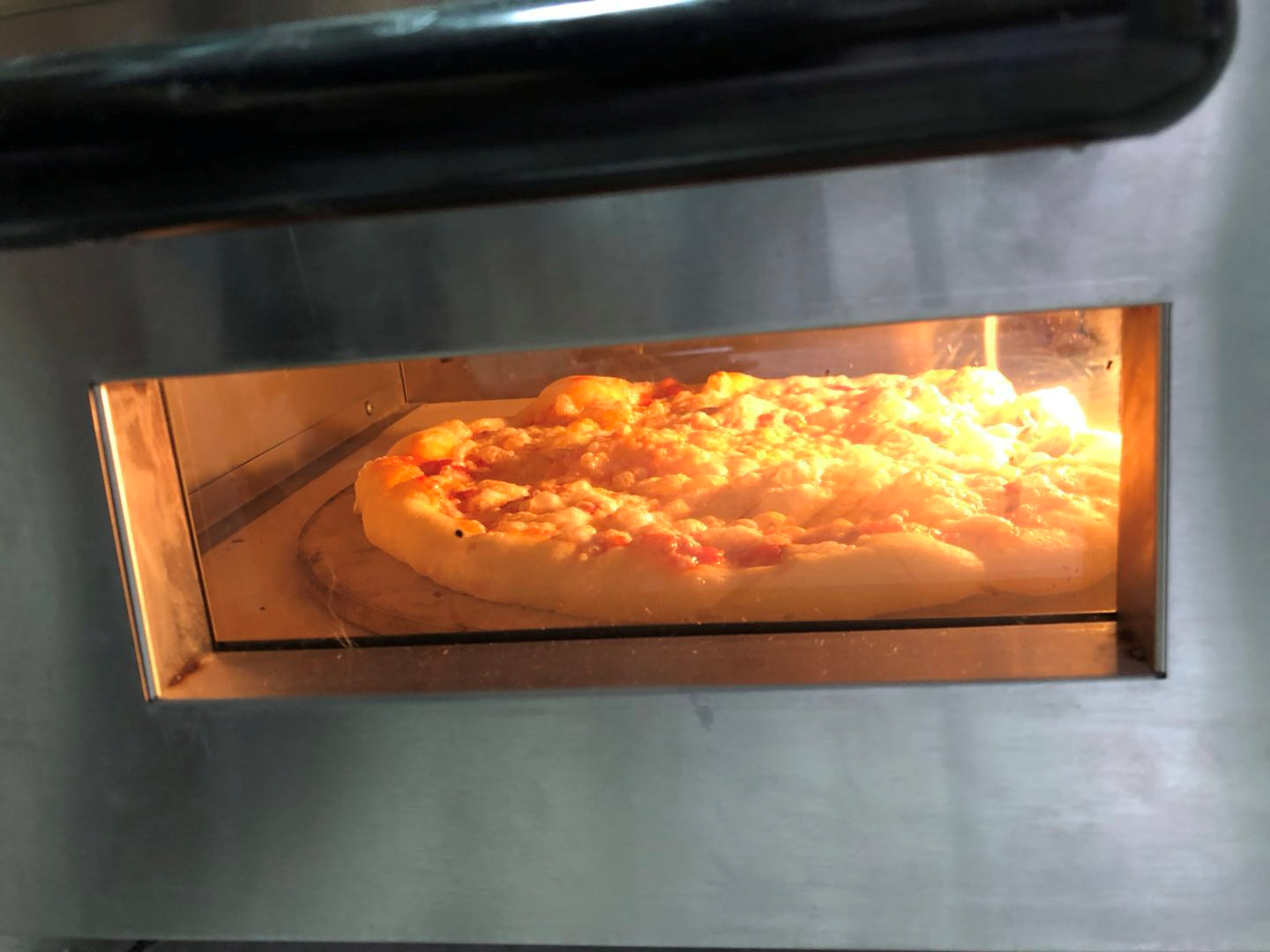 The pizza peel is one of the metal ones, I wanted a wooden one but they didn't have any wooden peels bigger than 12in. I did have a little trouble getting the pizza off the peel and had to keep adding more flour under the pizza once it was on the peel but I think it was an issue with how I prepared the peel. I don't think I used enough corn mill/flour originally which was the problem. The peel is super nice for taking the pizza out of the oven and I feel really cool using it haha. 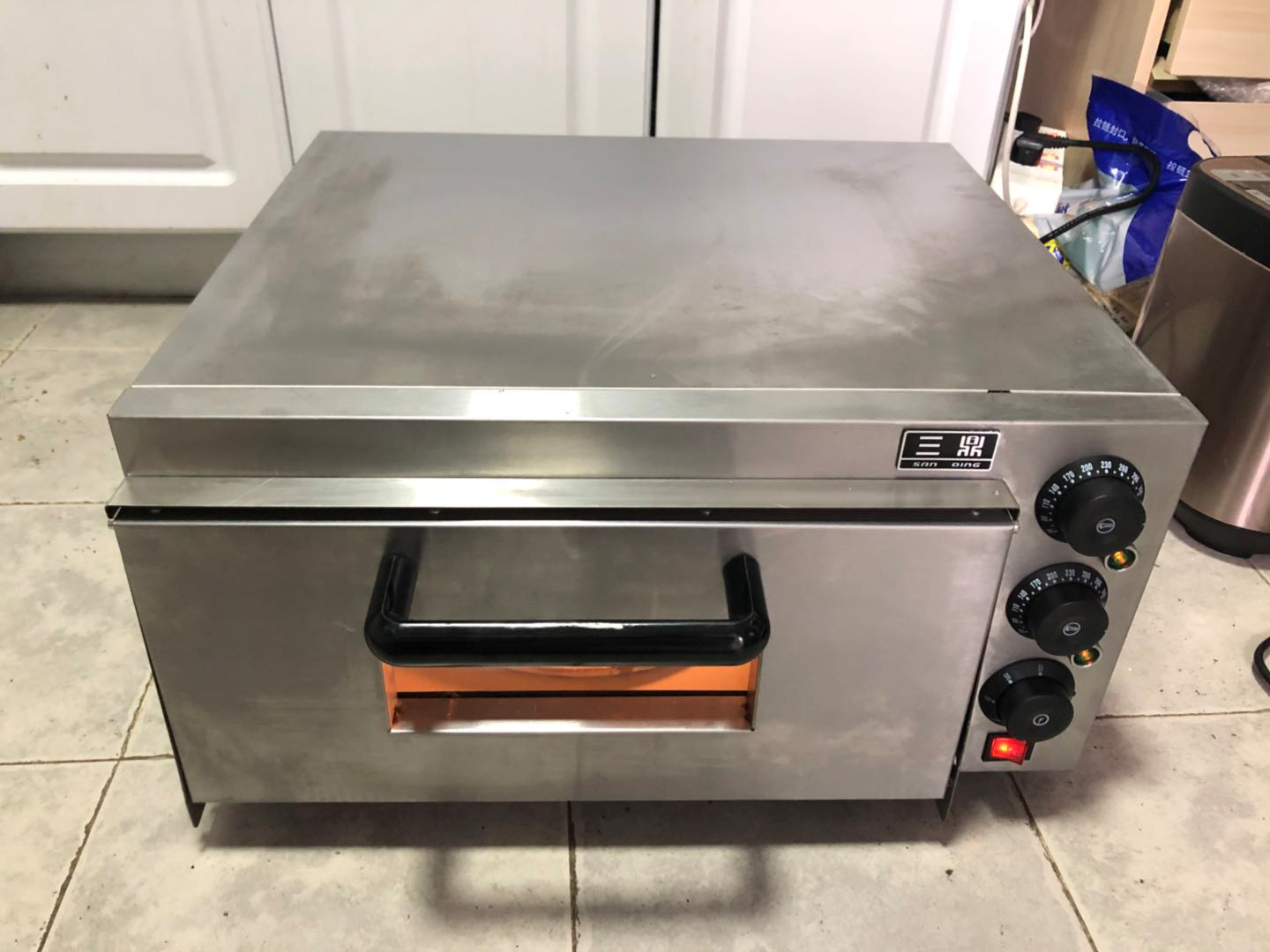 I immediately seperated the dough into 3 balls roughly 280-300g each. I coated them lightly in olive oil and let them rise overnight in airtight tupperware. The next day I put them in the fridge for a 4 day cold ferment. I meant to do 3 days but my pizza peel came a day late. 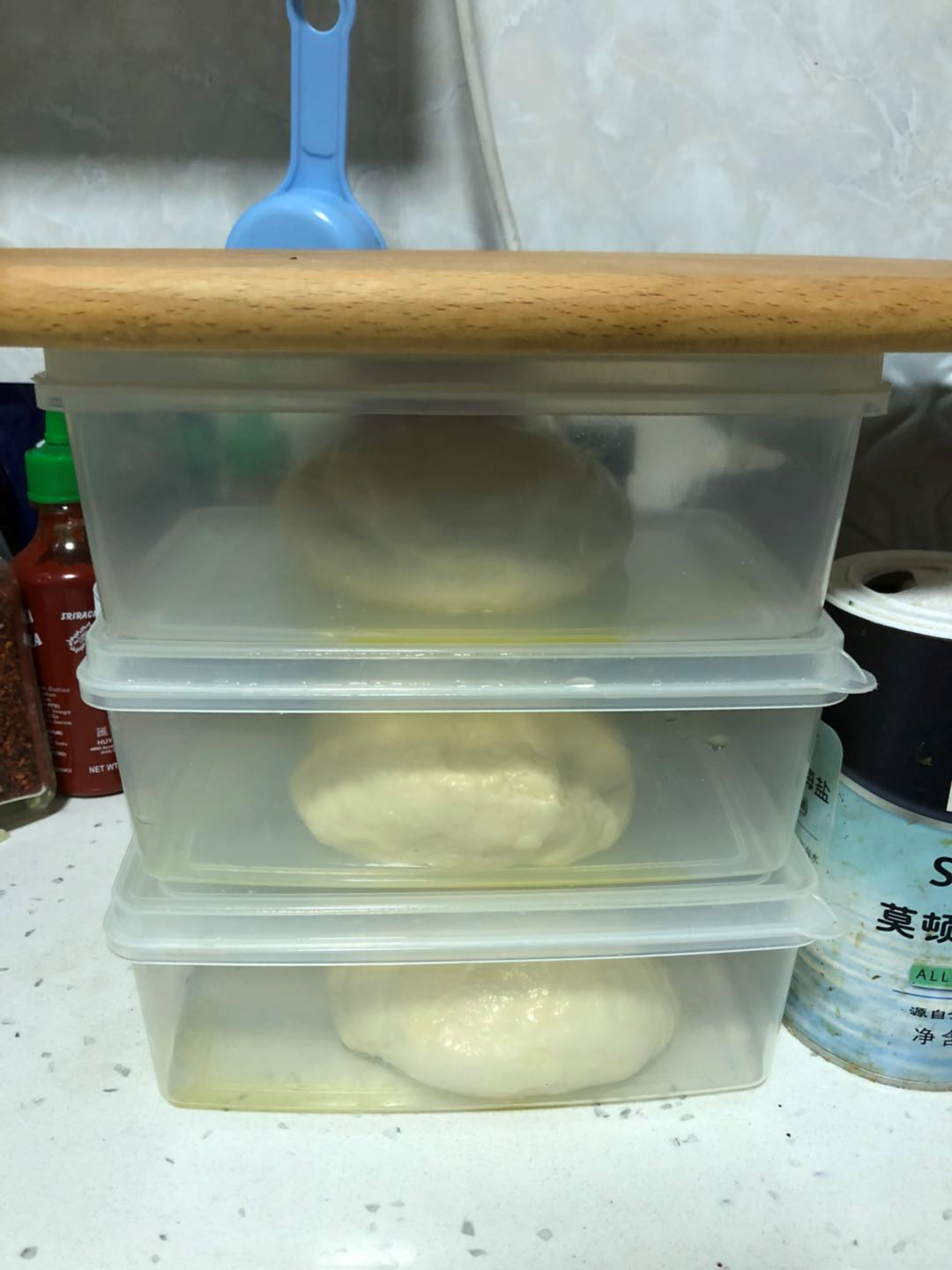 I made two pizzas, a simple cheese and a cheese with feta and onions. I'm really happy with both the pizzas and I feel like I finally achieved that restaurant style crust that I was looking for. The crust was crispy yet really chewy on the inside and it had some amazing charred bubbles! I went light on the toppings because I was worried about a floppy soggy pizza but I worried for nothing because this oven cooked the crust super well so next time I will definately be experimenting with even more toppings. 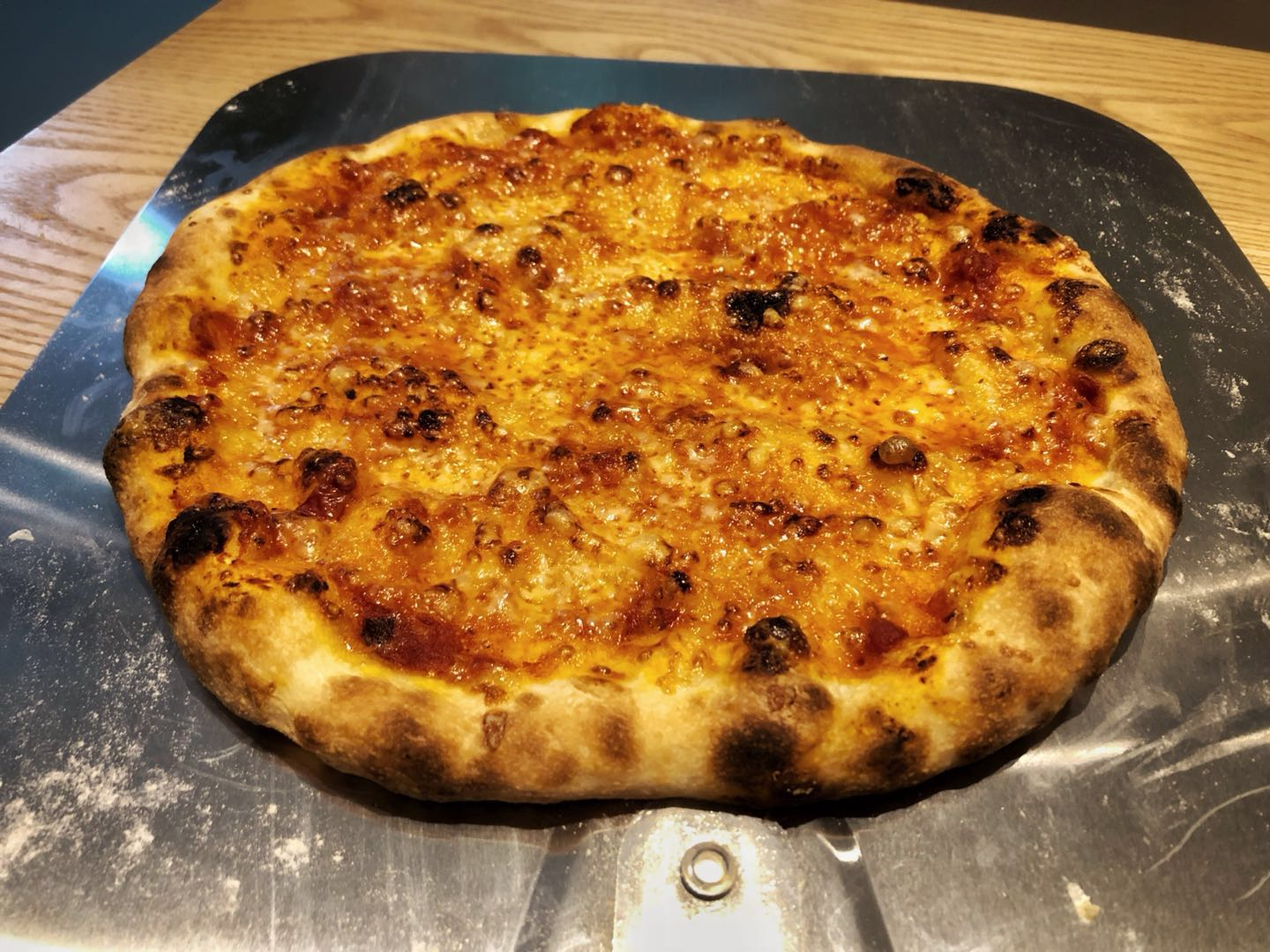 Cheese with feta and onion: 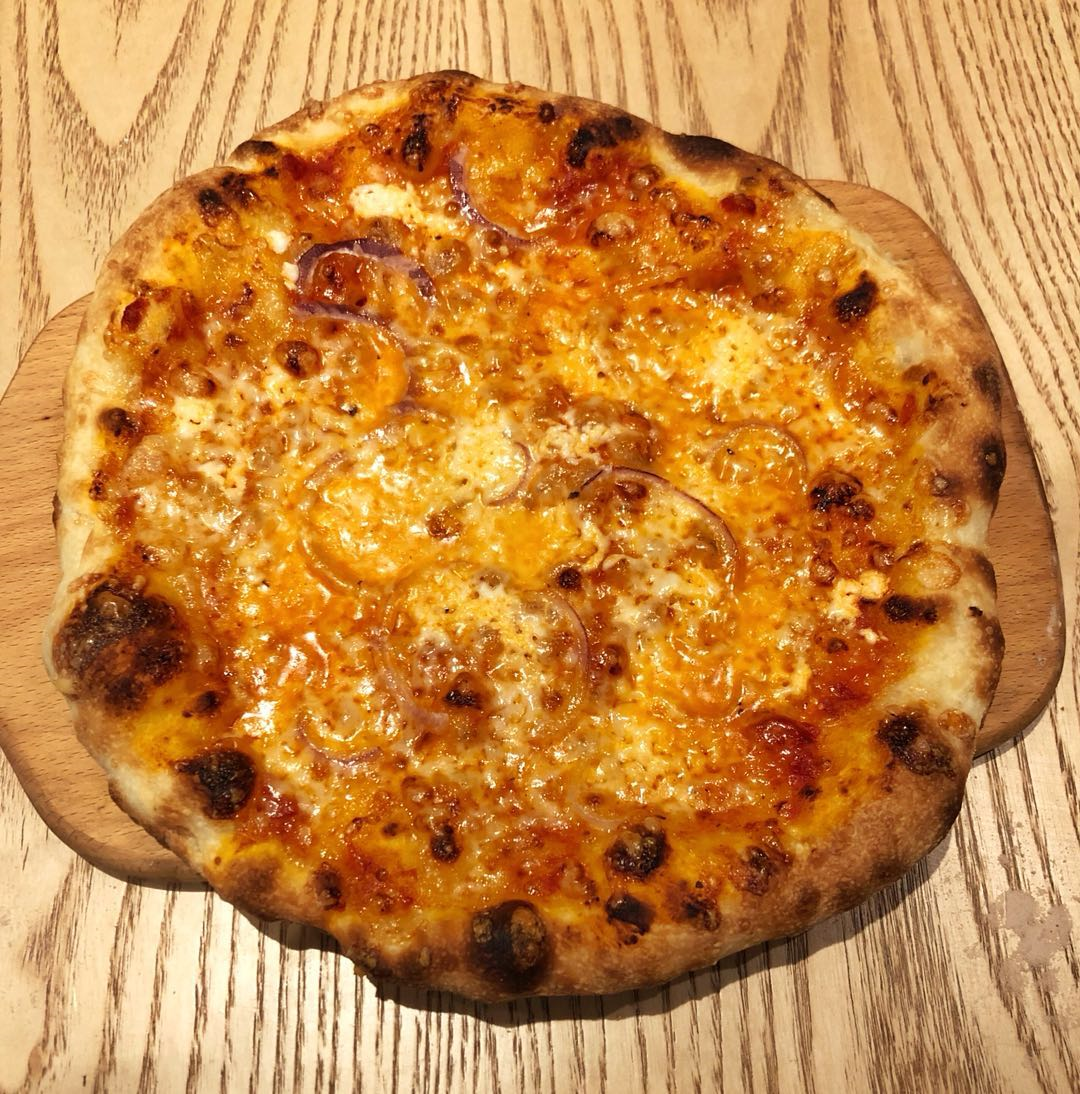 Shot of the chewy airy crust! For some reason the lighting was a little weird in this shot and it looks a bit more yellow but whatever haha. Thanks! Maybe they're a china thing but these are pretty much the only type of pizza ovens I could find online for sale here lol. Super happy with the oven so far though, can't wait to make some more on my next days off.

I have often thought about buying a pizza oven myself; or one day being able to have one (made of stone) built outdoors. We are HUGE pizza lovers here and I would definitely get every use out of it I could.

I highly recommend it! I couldn't be happier with the results of this oven. I don't know if you already make pizzas or not but it will significantly improve the quality of your pizzas if you do. I still can't believe how much of a difference I'm getting just from switching ovens.

Oh we have homemade pizza weekly here. I am from Michigan in the US and we have what's known as Detroit Style thick crust pizza... it is sooooo good- square, thick crust and the corners? We fight over them

immediately seperated the dough into 3 balls roughly 280-300g each.

I'm pretty sure it's seperated... also I've but whatever forget that That's quite a post on pizza how did you ever think up that much mouthwatering content? :D

I love making pizza but it wasn't until I came to China that I started getting much more into it because of the lack of quality pizzas here. It's pretty much pay 15-20$ for a medium pizza from pretty much the only decent pizzeria here or make my own. I'd also have to contribute part it to steemit as well because I'v been trying to make my pizzas look better for steemit posts :P

I'v been pretty disappointed in the pizzas I'v been making. They were getting better and I made some previous posts about them btu they were still leap years away from something like you'd get in a restaurant.

I'm really happy with the results of this new oven. I had no idea it could make such a huge differnce in the quality of my pizza.

wow nvm it is separated! I've been lied to :|

Thanks! It tasted as good as it looks.

yum yum yum give me more

Maybe next time you'll get 2 slices instead haha.

I upvoted your contribution because to my mind your post is at least 15 SBD worth and should receive 87 votes. It's now up to the lovely Steemit community to make this come true.

Cool thanks! I'll check it out and see what exactly it is.