A stealth attack on Authors now?

You know there's a thing about upvoting your own comments just before the payout?

So the backlash from the community when the downvotes hit me, an author of original content EXCLUSIVE for Steemit (and only me... apparently) put a point across, Authors don't like it, we saw that and I'm grateful for the support.

So sly downvotes just before the payout hits so there's no time for a backlash?

I did tell you I'm not here just for a payout, didn't I? 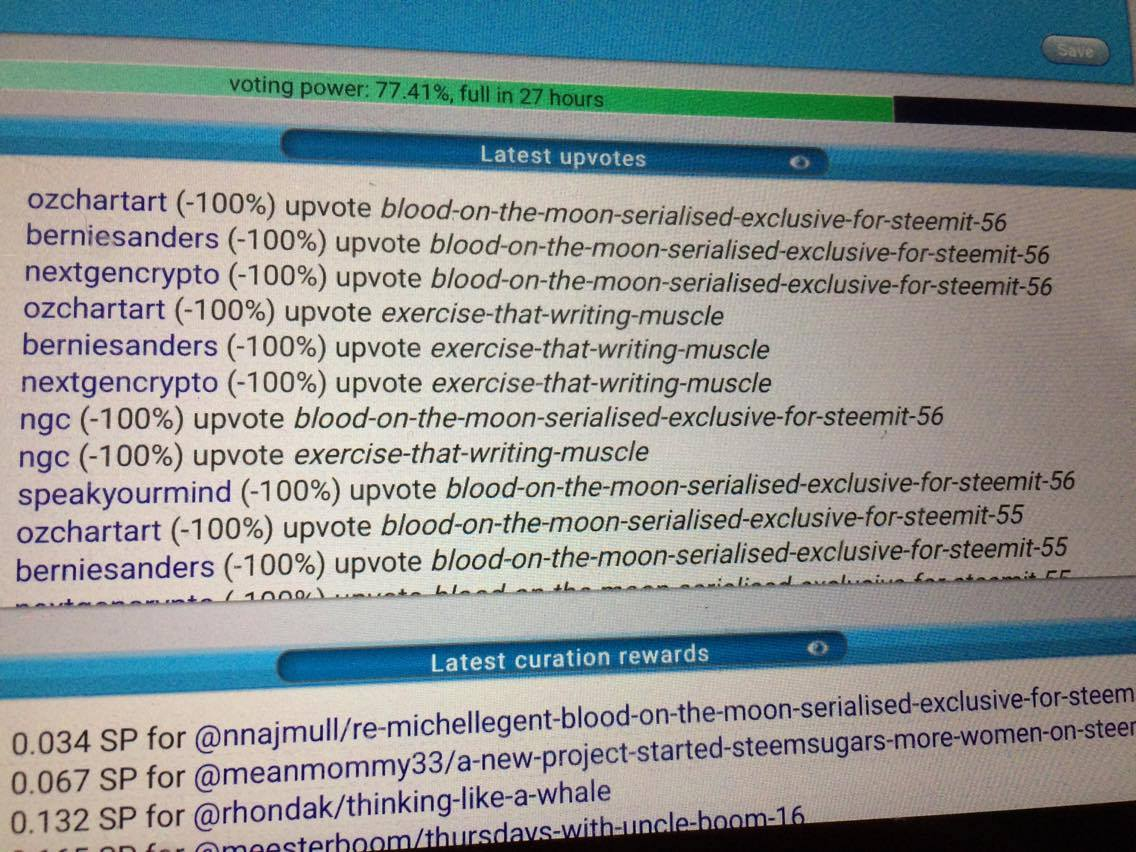 I think you really are bothered about how the Steemit community views you and I think you were hoping this would slide past.

I saw it and now other people will see it.

You'll start chasing authors of original content away - or is that your plan? 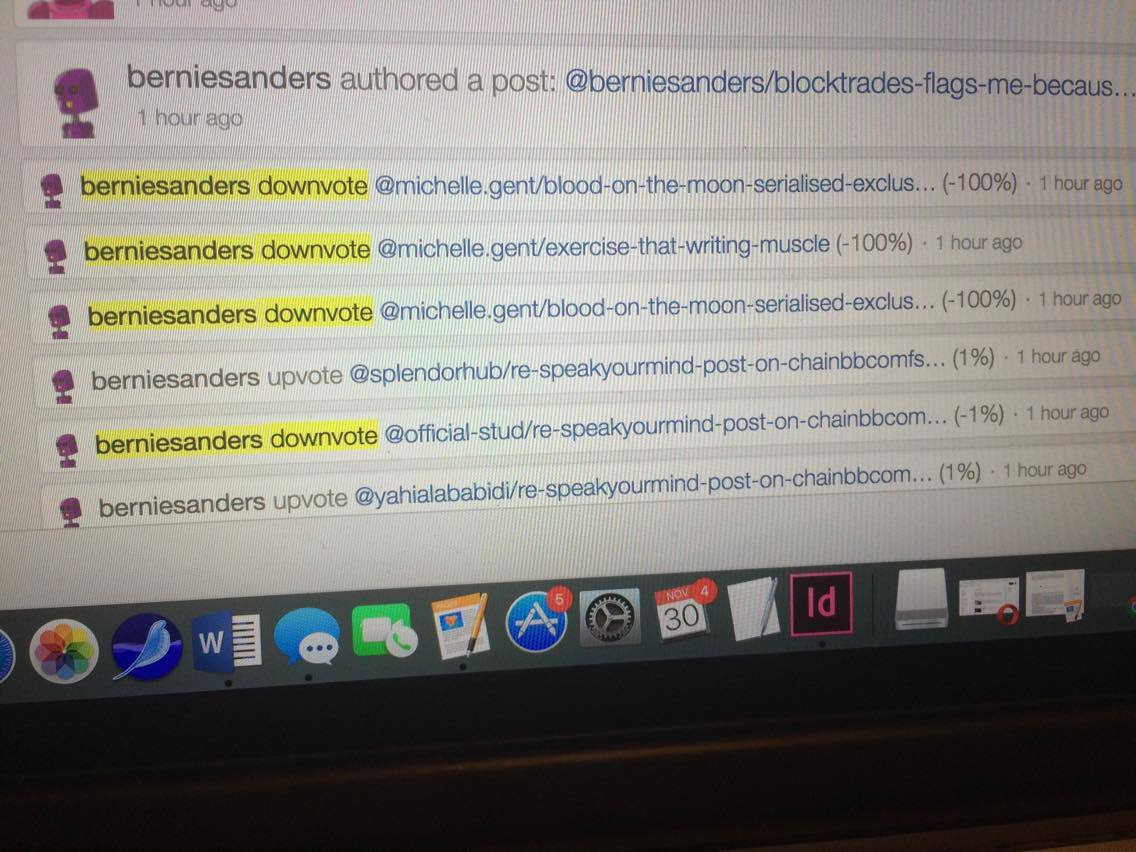 Hard to believe that another contributor could be so jealous or so attention starved, that in turn, would want to undermine anyone else's ligitimate work.

That asshat's latest post is at $299 after 3 hours and it consists of less than 10 words and a lousy cartoon of bears hugging.

Talk about rape. That guy is a menace to steemit. A pool rapist extraordinaire. And I am certain he thinks that is funny. With him here, this place sucks.

I really don't like that this was done to you @michelle.gent. You consistently produce quality content in the form of fantastic fiction. I think it is bad form on the part of those who have done this. I agree--if they keep it up, people who actually produce content are going to move on to other forums.

I think the point here is the extend of the abuse that validates community downvote on the individual actions:

Take for example your own post....you have one that's currently >$127 An Assassin's Tool: A Nyepsium Wars Novella -- Part Three but you have upvoted it yourself with bots to a value of ~$100.

Note: I won't say if you're post is super great or just so-so, but I will take the time to read it for myself and then I'll pass judgement just like any other Steemian.

Now it could easily be claimed that you took $100 out of the pool from people from over 100 countries, and robbed another 4 amazing authors worthy of $25-Steem each who get that vote even without trending, or maybe 10 very good authors who could get $10-Steem each, or even 20 aspiring authors who show promise who could get $5 Steem each. And if they persist, and keep writing, and Steem goes to $10 in 5 years time or Steem goes to $100 in 10 years time....they will vest and be rewarded accordingly, and not just you alone (which would be bad for Steem in general).

The example in this point is, even if I was to argue that you deserve some self-bot-upvote, it's more probably that your post is worth say max equal to the your own upvote (since hardfork 19 upvote reward payout is now linear....which led to the uprising of bots. yes there was very few to no bots from hf2 -> hf18).

So maybe you should have been more reasonable and upvote yourself to a max $25 Steem and if you consistently earn around say $25 Steem....I would say that's more acceptable, less abusive (others like @transisto and @berniesanders would debate this point...but I don't always agree with them in the devils of the details) and hence you'll be less likely to get flagged.

If people are so god damn upset about the amount of money post are making from the use of upvote bots, a tool that should not even be on steemit (bots), then do away with the god damn upvote bots. It is that simple, then the only thing that will count is the one vote any author is allowed to give their content then the votes of people that manually upvote the post. Do away with curation trails of non-content creators trying to earn a buck off the backs of content creators, do away with the BOTS and then we will see a true reward system. Until the curation trails, and the Upvote bot situation is taken care of I can only view the downvoting for "Reward Pool Rape" as nothing than a phrase to justify in the down voters minds of their communist Redistribution of wealth into their own pockets. If they were honest about their intent then they would do as @ned does and decline payout for all their ""Bragging Look at what I DID post About slamming a real Author, oh and Please Upvote, Comment, And Resteem because I am such a great great person, did you see what I did. "So in conclusion when @transisto and @berniesanders stop profiting off their downvoting to return the funds to the reward pool, then taking all those returned rewards for themselves, I may change my mind."

You know there's a thing about upvoting your own comments just before the payout?
I didn't think that was possible. I thought something in the code prevented it within the last twelve hours .
no?

Good shaming. I still don't get why though. When we as readers upvote your posts, we do so by choice because we enjoy your talented writing.

Authoritarianism only works with punitive actions......

How comes about this?

This post has been ranked within the top 80 most undervalued posts in the first half of Dec 01. We estimate that this post is undervalued by $10.99 as compared to a scenario in which every voter had an equal say.

Good grief.
But, since he's got such a low rep now, doesn't it not affect anything? Or does that no longer matter?

He can still flag her rewards, but he can't touch her reputation.

rep doesn't affect vote power...only SP does.
I'm not really sure what good rep is to tell the truth.
a vanity metric is about all I can figure.

Were you notified why you got downvoted?

What was that reason?

Man, he's really got it in for you. That sucks so much.

It is just an downvote, per the rules of the blockchain.

I don't understand why someone should downvote against a quality original article? I have never experienced it before, perhaps because I'm not a famous writer at Steemit, so it does not attract the attention of the bad guys.

How do we deal with these bad guys @michelle.gent?

O don't mind me I'm just here for the entertainment and it's cheaper than paying for a movie.

Steem..
You come for the money.. You stay for the drama

Looks like the bernie got to you too. Talk to me on Facebook, I'll explain the current strategy.
<3

Very great blog writing bro thanks for this information.

sir what's my fault, why you down vote me.
If I make a mistake, please forgive me for the first time.

sir what's my fault, why you down vote me.
If I make a mistake, please forgive me for the first time.

sir what's my fault, why you down vote me.

If I make a mistake, please forgive me for the first time.