schattenjaeger (71)in #fiction • 5 years ago 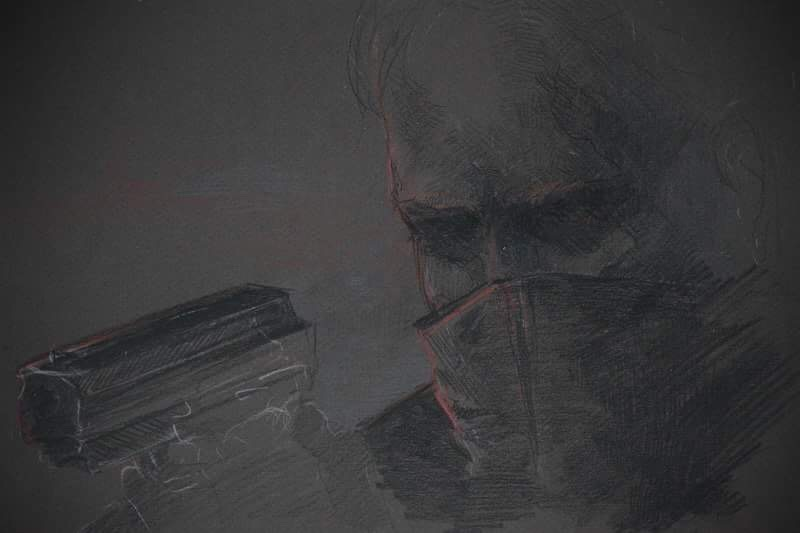 A weaponized virus is suspected to be on US soil, likely to be used against American citizens. Adam Black,a former federal agent, framed for a terrorist attack 18 months prior, has been broken out of prison by the Anti Terrorist Coalition ATC as part of an undercover operation, in which Adam attempts to infiltrate the ranks of a known drug criminal to gain intel on the virus.

Adam is holding the gun Diaz handed to him. He tries to both think quickly as well as focus on maintaining his cover. There's no right way to go here. Gwen has her eyes locked on the gun that Adam was just told to shoot her with. She, too, has a million thoughts running through her head, from maintaining Adam's cover to simply saving herself from the situation.

Adam finally makes a judgement call and aims the gun at Gwen, hoping she does something, not really wanting to pull the trigger - but at the same time thinking about all the hundreds of thousands of lives that are in danger if the virus ends up in the wrong hands.

As Adam aims the gun at Gwen's head, Gwen kicks the gun away from his hand, then pulls out her own gun and grabs Diaz into a chokehold with the gun pointed at side of his head. Adam is simultaneously happy, but also worried that their cover is now blown before the operation ever even started.

"Neither Adam or I are here to play games, Diaz!"

Diaz's men take aim at Gwen, but Gwen quickly tells them off.

"Make a move and your meal ticket is dead, I dare you!"

Diaz makes a hand signal, telling the guards to lower their weapons. Gwen then attempts to convince Diaz that he should work with them.

"We're here to make you a lot of money, Diaz! You can either take it, or leave it, but don't waste our time with bullshit like this."

Adam then sees this as an opportunity to make a play with reverse psychology.

"You know, Gwen. Maybe we should just go."

"You know what. Maybe you're right. Maybe this guy isn't worth our time. We can take our business elsewhere. I'm a federal fugitive, I don't have a lot of time, I didn't come here for nothing, you want the money or not?"

The potential of possibly losing out on a big opportunity does make Diaz sweat a little.

Adam takes it up a notch, as he sees in Diaz that they're making progress.

"Then let's stop with this bullshit, and talk! You tell these traffic cops to put down their guns, and I'll tell you how you're going to make a ton of money. Or we'll kill all of you, and trust me: we can."

Diaz tells his men to put the guns down.

Gwen lets go of Diaz, and Adam picks up the gun from the ground and hands it to Diaz.

"Let's go inside then. After you."

Diaz leads them inside the building to talk business.

Richard receives a call from the President in his office.

"Do you have an update on the ongoing operation?"

"Adam and agent DuClare were able to locate Nicolás Diaz. He is supposed to inform me once he is successfully undercover."

"But you haven't heard of Mr. Black or agent DuClare as of this time?"

"As of this time, no. But regardless of how I feel about Adam Black, he's very good at this job. And agent DuClare isn't far behind. If there's two people I trust to do this, it's them."

"I trust that agent DuClare is expected to keep an eye on Adam? For precaution."

"I have no doubt that you know this already, Mr. Williams, but I feel compelled to press the urgency of the situation once more. If that virus is used against American people..."

"I understand, sir. We're doing everything we can."

And why isn't he hearing from Adam. This is what he hates. He knows Adam is extremely good at what he does, but Richard still feels so annoyed at having to place his trust on Adam once again. Nothing ever works quite according to plan with him, even though he does produce.

Diaz, his men and Adam and Gwen have gathered inside of the abandoned building, as Adam is filling Diaz in on the virus, using the cover version of why he's after it.

"It's called the Azrael virus, ever heard of it?"

"Upon infection, the weaponized version it has a two hour incubation period, after which it has a near 100% mortality rate. It's infectious, and can spread through the air like wildfire. I have on good authority that this virus is in Los Angeles today."

"And what you need from me?"

"I need your connections. We need to find out where this virus is, it's no doubt being sold for a good price. We locate the virus, and we sell it to the highest bidder. You know what stuff like that goes for."

"So, you need my connections. What's in it for me?"

"10%. That's all. This stuff goes for hundreds of millions. All I need is enough to get out of the US and start a new life. I'm a fugitive. This is all I have. This will make you a fortune, Diaz."

Diaz is starting to be somewhat convinced by Adam's cover story, and Adam can tell from his body language that he's getting warmer.

"So, you need me to find out whether a transaction is taking place?"

Diaz looks at Adam, and then takes his phone from his pocket.

"Be quick about it, we're running out of time."

Adam and Gwen glance at each other, as if to say "Phew", Diaz seems to have bought the cover story and is cooperating.

School starts at 8am, but Samuel Parker arrives late to meet with his girlfriend Jennifer during lunch hour. Samuel used to be a good kid, always on time, always studying. Lately, however, he has been late, looked he hasn't slept well in weeks, and this has started to worry Jennifer.

Samuel is all smiles and just hugs his girlfriend.

"Yeah that's what you keep saying. You know, I'm starting to worry. You look like hell, you're late from school, you're skipping classes... seriously, what's going on with you?"

Samuel hands Jennifer an expensive bracelet, one of many gifts he's been getting Jennifer lately. Samuel does not come from a rich family, quite the opposite. So, naturally, it's very suspicious that all of a sudden he's getting Jennifer these expensive things.

"Samuel, that's beautiful. I love it, I really do. But how did you get this?"

"Don't worry about it, babe. I just want to be a good man for the girl I love, okay? Seriously, everything's great."

Jennifer is not convinced, but of course the expensive bracelet does wonders.

"Why don't you go ahead, I'll answer this, though it's probably just a tele marketer, or something. I'll be right behind you."

Jennifer is worried, but heads to the school diner, while Samuel answers the phone.

The voice on the other end belongs to a man speaking with a heavy German accent.

"Just doing a check up on you, Samuel. You understand what is asked of you tonight?"

"Yes, sir. I come there and pick up the thing and... Yeah, everything's cool."

"Just do your job. I'll call you in a few hours for further instructions."

The man hangs up the phone.

Diaz has finished his phone calls, and fills Adam and Gwen in on what he was able to find out.

"You were right. The azrael virus is in Los Angeles today. A deal is taking place at 2pm. I don't know who the buyer is, but the seller is a Swiss businessman called Claude Vasella. And you really weren't kidding at the price this thing is going by."

"Okay, we have an hour, did you get where the sale is taking place? We need to get there before the sale takes place."

"Yeah, I have the address on my phone."

Diaz's men aim their guns at Adam and Gwen.

Diaz heads out to his car, leaving Adam and Gwen behind, aimed at by his men.

Adam and Gwen were both prepared for this, and manage to take out Diaz's men, but by the time they get out of the building, Diaz is gone.

I fucking knew it!

I know, man. I should have bought BTS.

I will like to follow to the end , hmm, is interesting, money is the root of all evil , i think Adam is confuse , or maybe he is compassionate, thing of the money and thinking of those going to be affected when his aim is to get the assignment done. Schattenjaeger is that the end, hope is not. Keep flowing , nice write up, i want to see more/ thanks

Thanks for reading and commenting. :)

Adam is actually not interested in the money, he's working undercover in order to get Diaz to work with him locating the virus, which Adam wants to make sure doesn't end up in the hands of terrorists, etc.

Or he was, until Diaz, being a criminal, betrayed him.

Now Adam needs to find Diaz in order to find the virus.

Thanks for the correction.

Congratulations @schattenjaeger, this post is the tenth most rewarded post (based on pending payouts) in the last 12 hours written by a Superuser account holder (accounts that hold between 1 and 10 Mega Vests). The total number of posts by Superuser account holders during this period was 796 and the total pending payments to posts in this category was $2831.86. To see the full list of highest paid posts across all accounts categories, click here.

this picture is totally silent mood..i also like your post..@schattenjaeger