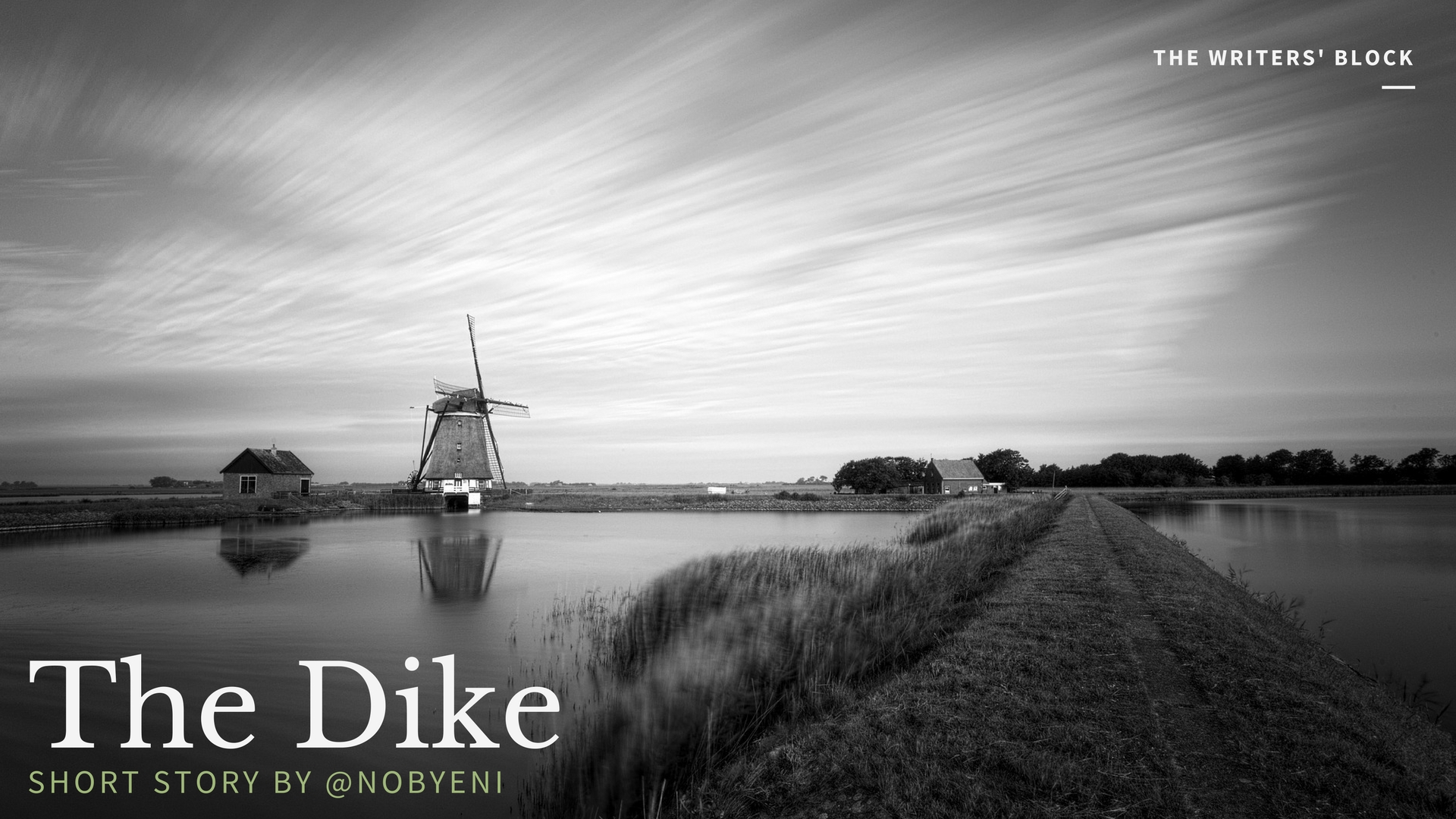 It hurt. But what could she do about it? The dike stood completely still. The wind pulled on the leaves of grass that covered her. Ants continued their antsy business as if nothing was going on. But deep inside the pressure kept rising. How long would she be able to keep it up? And what would happen if she couldn’t keep the water back any longer?

She normally loved this time of the day. The sun just above the horizon warming her side. And together with the sun came the first stirrings among the ducks waking up. They tickled her as they walked up her flank. Then they would sit with her for a bit, enjoying the sun together before leaving once more to find food. She cherished these moments. The silent promise she had made them. Her protection in exchange for their company. They all trusted her. She had never imagined that she would have to betray their trust. And so soon.

But her main promise was to the people. That first day when all those people were laughing and dancing. They came to her, some of them singing. It seemed impossible they would all fit. They had all come to celebrate her promise. And to show how much they cared. Even after that grand opening, they had continued to come. Once a week, a whole group of them would visit her to see how she was doing. The people from the village were all very nice to her. Which was to be expected. She helped them a lot. Especially now with the water so high.

The hole started out small. At first, she didn’t know what it was. It felt funny, that’s all. As if a piece of her was missing. Then the water started seeping through. Only a few drops at first. But the water was strong and started eroding her from the inside. Why had she never thought about this before? Withstanding the water had been the most natural thing for her to do. But apparently she had been pretty special. If only she could go back to that feeling.

By now the ducks had all left, off to do whatever it was ducks did. They hadn’t even noticed she wasn’t complete anymore. Why didn’t they even look? She was just a dike, but she needed attention, too. She was always there for them, whenever they needed to find a place out of the wind or to hide from the rain. The loneliness hit her hard, maybe more today than ever before. What if this was only the beginning? What if she ended up being more hole than dike? What would the people think of her?

All of a sudden there was someone stepping on her. A boy. He had come by before. A couple of times even, together with one of the men who usually came to check up on her. The boy was usually quiet enough. At times he would come sit for a while, looking out over the water. He probably lived in the town. Thankfully he was not fully grown, so his boots didn’t leave dents on her.

What was that? Something pricking her, but it didn’t hurt. A kind of tickling. The boy was leaning against her side. What was he doing? The leaky feeling had disappeared. It was his finger, the boy used his finger to stop the water. No more water racing through her, tearing her apart. Would that mean she would be okay? Would she be able to keep her promise?

How long would the boy be able to stop the water? What would happen if he fell asleep? What if the water was too strong for his tiny finger to hold back? How was she to warn the ducks? Their homes would all be swept away. And what about the boy? He shouldn’t be here. What would his father think, after all he did for her. She would let them all down.

Hopelessness engulfed her, intensified every minute the boy kept stopping the water. He was helping her keep her promise. But what was it worth if she couldn’t keep it herself? It wasn’t just her job, it was why she existed. Only a matter of time before the people would find out she was a useless dike. It would probably be better if the boy had never figured out what was happening. Why couldn’t he just be on his way and leave her alone? Being dependent on the men who took care of her was okay, it was part of their agreement. But this was just wrong. The boy should just take away his finger. The truth about her failure would come out and she would face the consequences. But at least her pride would have remained intact. The sun was almost going down, and the boy was still there. Saving her from failing.She wondered what would happen to her when the people found out she had failed them. She wasn’t the dike they had hoped for. She had let everyone down, right in the middle of winter.

The coming darkness suited her. She would fail her promise, but nobody would be there to actually see it. If only that boy would just leave her to it. Perhaps the boy would remember the night he had spent trying to save the dike that couldn’t keep her promise. The boy should go back to the village. Save the people, get them to higher grounds to make sure they were out of the way when she would burst. Because she would. It was just a matter of time. Perhaps that would teach them to stop putting their trust in dikes.

She felt things moving inside her. The water might no longer be getting through. But the boy’s finger didn’t stop it from entering her. Soon the pressure would be impossible for the boy to stop. But then heavy boots stepped on her. A whole group of villagers had come, carrying torches. And with them, shame washed over her. They would not leave her alone to die in peace. She tried not to listen to what the people were saying. They were hurrying towards the boy.

Surely it would be over soon. Perhaps they would use some parts of her to fortify the village. Or use it to make another dike. As long as they would just hurry up as she wouldn’t be able to hold out much longer. And once the water found another way out, it would surely be the end of her. Dikes don’t live forever, and that’s not a problem. But this was not the way she had ever imagined her end to come. If she would only have been able to shout that they should leave her alone. She had failed them. Couldn’t they stop trying to cover up for her? 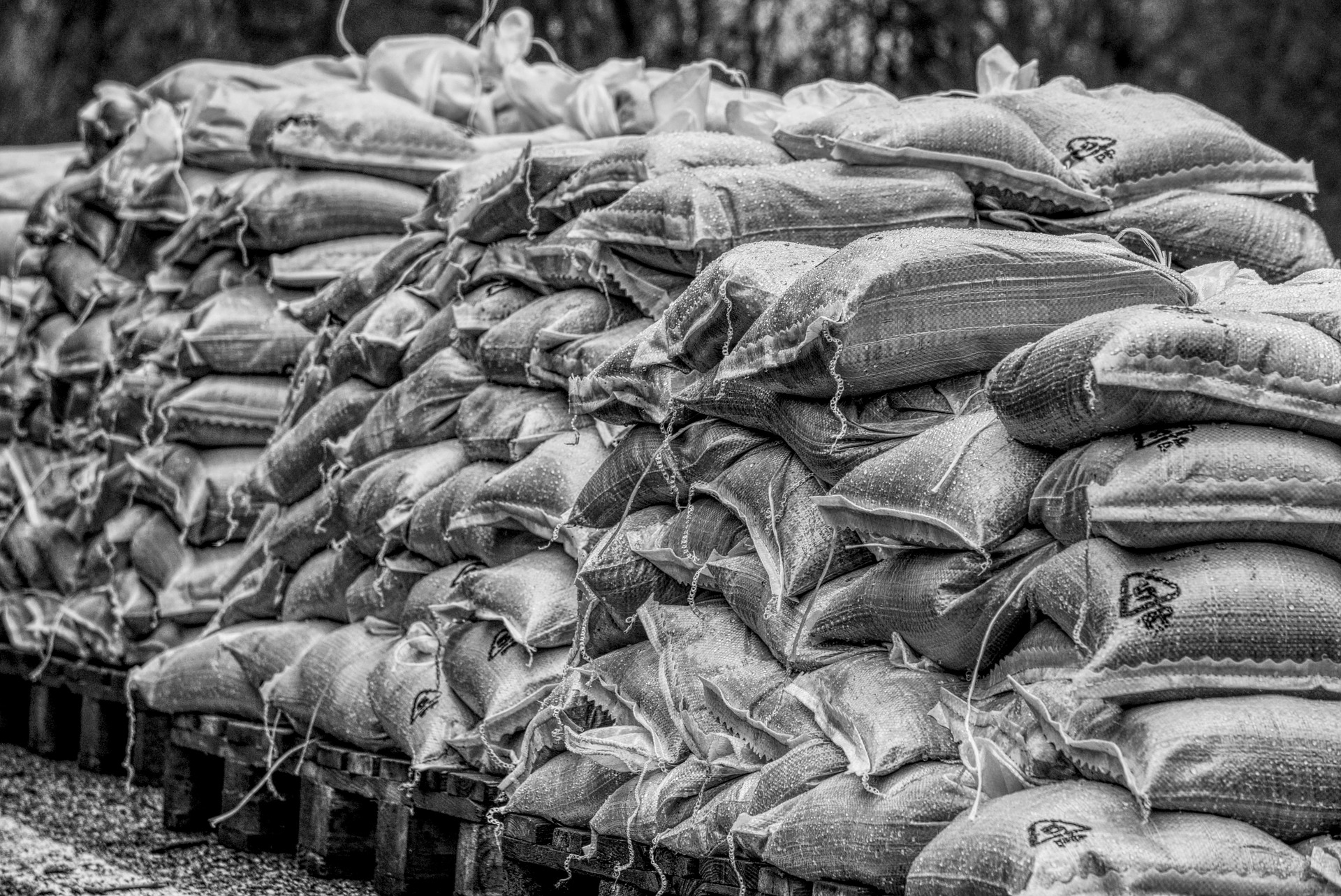 But the people didn’t care. She was nothing to them. Nothing. Just a dike. It obviously didn’t matter to them what she was feeling. They never stopped to consider her for even one moment. They kept running up and down, forming lines, carrying heavy sacks full of sand. Fortifying something that was already lost. They were already replacing her. The sacks would stop the water and make her completely unnecessary. And with every sack to put in front of her, they were killing her. If she had anything to say about it, she would have shouted at them to go home, to leave her alone. But she couldn’t. With every passing minute her despair muted her even more. She longed for the moment the people were proven right. For her to simply be just another dike.

This post has been voted on from MSP3K courtesy of @thinknzombie from the Minnow Support Project ( @minnowsupport ).

You did such a great job with this, Noby. This piece has turned out amazing.

This is an interesting piece.

So.. a dike...a desperate dike.. It was among the few fiction stories I've read this week. Quite unusual protagonist. Well done @nobyeni! :)

Nice work. The way you personified the dike is splendid. See how you got me feeling sad for an inanimate object? Lol...May your ink never run dry.

$0.05
1 vote
Reply
[-]
bex-dk (61) 2 years ago
This post has caught the eye of @MuxxyBot and has been nominated by the curation team.
If chosen it will feature in a curation post by @MuxxyBot.
An image from your post may be featured.
Please reply to this comment if you accept or decline.
$0.00
Reply
[-]
nobyeni (59) 2 years ago