How about some pirate-flavoured flash-fiction?

This is an entry to the Art Prompt Writing Contest by @gmuxx, which I saw because I caught @ellievallie’s submission after meeting her at #isleofwrite. Or was it #thewritersblock? Too many discord servers, not enough time.

The contest was to write an original work of fiction between 500 – 1500 words. There were two intriguing art prompts offered: 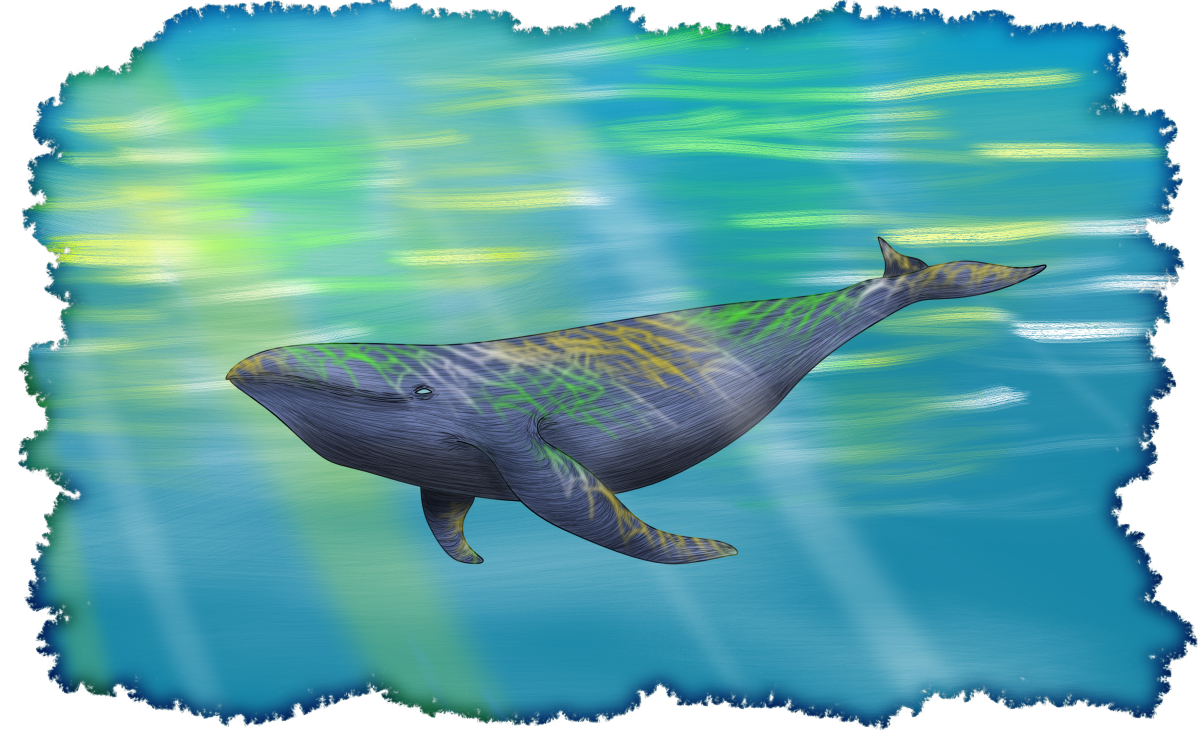 Being a Gemini, I figure I’ll combine the two. So let’s drape some moss on those trees, make the forest a little more lush, and go on an adventure…

I paused before I left the trail, looking back to the bay below. The whales still played games, splashing around like giant children, even the eldest of the pod joining in.

My heart swelled. They remembered me, even though it had been several years since we’d shared this island together, when their cyclical migration and mine coincided.

Humid air in my nostrils, the green of the forest filled my senses. For a moment I picked out different bits of birdsong and sought the singers in the canopy, clearing my mind.

But when I stepped sideways, over snake-like roots and sprawling vines, ducking through foliage that had grown so thick I could barely see my trail markers, my brain kicked into high gear. I drew long breaths to keep myself from running.

No need to call attention to myself in this forest. Not that I was scared of jaguars and pythons, or the many other creatures that flourished on this island. No, what bothered me was the ship anchored on the other side of the bay.

I’d stashed my ship in its cave, having waited until low tide to sail in. She’d rest there, trapped in the cavern during high tide, but hidden. Safe.

In the many years I’d been coming here, I’d only seen a few other ships. The island was far enough out, an unnamed speck on most maps, easy to miss if you had your bearings the slightest bit off.

My most secret home.

A place I could exist without anyone knowing, without anyone keeping tabs on me or measuring my skills. Without having to serve some merchant or king or powermonger in their petty schemes.

I’d never sworn fealty to any but myself. At least I could say that.

A broad leaf brushed my face. Sweat made my shirt cling to my skin, but I was glad for the protection of my jacket and full pants. My boots were caked with mud. Usually I tried not to come here during the rainy season. Another reason the boat in the bay seemed odd.

At the thought, the golden glow of sun filtering through the canopy shifted into a duller light, and the wind picked up. The storm I’d seen on the horizon as I sailed in had reached land.

I picked up my pace, wanting to reach the hut before the clouds opened up. It couldn’t be far, now. I ignored the ache in my shoulder from my latest run-in with the fools who thought they could police this part of the ocean. They were getting bolder. Might have to deal with them again soon.

But not now. First, I would rest. All I wanted was to sleep for days.

With a jolt of surprise, I broke through the thick foliage and found myself on a trail. A trail that had not been here before.

And it led right to my hut! Smoke rose from the small chimney, and light flickered behind the little window.

Someone was in my house!

My fatigue forgotten, hair rising on my neck, I drew my knife and palmed it. I crept forward on the edge of the path, ready to dive back into the thick of the jungle if someone came charging out.

But no one did. I reached the worn wooden door, stared at it, and considered knocking.

No. This was my house.

I burst in, stood tall in the short doorway, and scowled at the man who spun around to face me.

Damn. He was nice. Cute even, in a scruffy, squatting-in-my-house, annoying sort of way. Still no sense in making the guy feel at home. I kept my knife in my hand. Tossed it once. Caught it, and pointed the tip his way.

“Yes.” I gave him a one word answer. Figured I’d let him do the talking.

“Right,” he said. “Sorry. I didn’t mean to take over your place, but I needed somewhere to stay. I knocked, and waited — for like a week — but no one showed up.”

“So you moved in?” I arched my eyebrows.

“Yeah." One side of his mouth lifted up. “It’s a nice place. I figured I could offer you compensation if you came home.”

The smile did me in. My chest flushed a decidedly different heat than my previous rage, and thoughts of sleep turned to thoughts of other things. I focused on scowling.

“What kind of compensation?” I asked.

He lowered his hands. Moved one slowly into a pocket, and slowly out again. Flipping his hand over, he offered me a leather pouch, gaze confident. “Consider it rent.”

I took the pouch, held it in the hand with my knife and poured out rounds of silver stamped with the emblem of a former client of mine. One I’d be happy to see lose more of his silver.

“You hiding out?” I asked, sheathing my knife and pocketing the pouch. I shut the door and slid my jacket off, hanging it on the peg next to his.

He nodded and stuck his hand out. “The name’s Nomad.”

“Wanderer.” I took his hand, shook, and proceeded to raid my own kitchen.

The low rumble of his laugh gave me more of a thrill than it should have, and when I glanced at him, the dark of his eyes told me his mind had gone the same place as mine. I spooned papaya into my mouth, savouring the juicy fruit and the fact that I didn’t have to gather it.

Nomad crossed the small space to stand next to me at the counter, took a plate off the top of a coconut and poured some sweet water into a cup, sliding it towards me.

I drank, not taking my eyes off his. A sack of silver rested heavy against my hip, thoughts of politics pushed far from my mind. It was a promising start to a well-earned retreat.

At the request of some very kind readers, I have continued the story. Here's Part 2 of Wanderer's Retreat. oh this was intriguing and sexy! great writing. I was hooked from the first talk of cyclically meeting the whales, to the secret hidden home on the island, to the strange man in your home & the tingling attraction (felt through the wariness) in the beginning :) Is there a part 2? ;) !!

hmmmm.... part two would be fun. Thanks for the encouragement. So glad you enjoyed it! ;)

Matching the names was a nice touch.

A promising start indeed - this is practically begging to be continued!

Thank you! I'm glad I saw your post and found the contest. I haven't written fiction in a few weeks, and I so enjoyed this!

You should definitely write more of it!

I definitely agree this needs to continue, I'm very curious how it develops!

Thank you kindly for the encouragement! Here's Part 2. :)

woooooooooooo what I GREAT story!! I could not stop reading it and kept reading faster to see how far they got and then it ended :(

I'm so glad you're enjoying this story! Yes, I just posted part two! It might be a slow burn... but they'll get there. ;-)

So, I stop by one of my favorite blogs to find yet another huge surprise. You are just a treasure. Off to read part two...