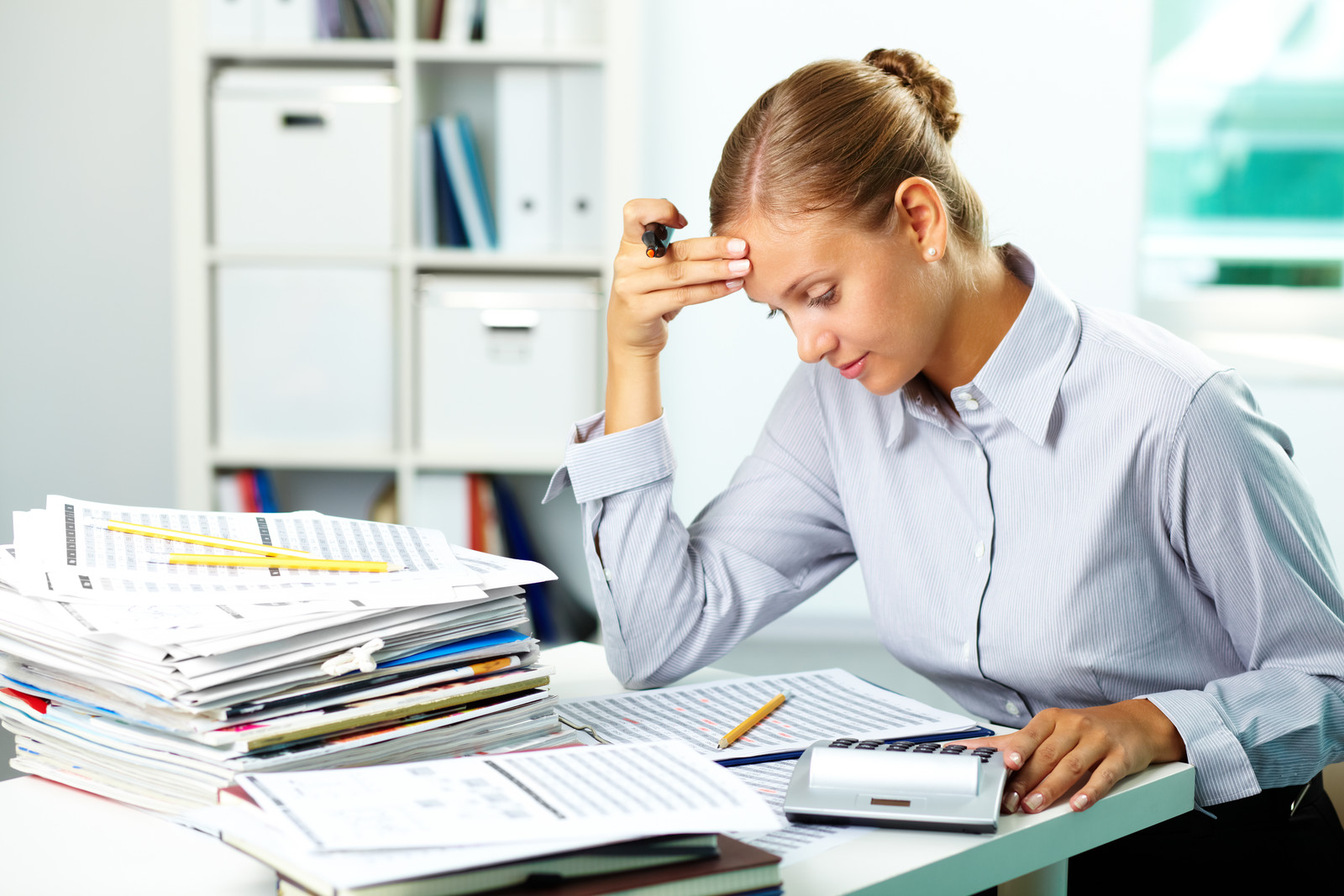 Recently retired or otherwise unemployed mildly clueless accountant overhears diners at a nearby table discussing a business difficulty and offers advice.
They seek him out periodically for more. Eventually hiring him to handle their books and offer other periodic advice.
He doesn't realize that they are the mob. He also doesn't realize that he is moving quickly up the ranks because the irregularities he finds in the books lead to catching leaks, or people skimming off the top. Or that by pointing them out, he's actually arranging hits on the people in question. -- Bard2DBone

So now she had ten years of her shit in a cardboard box, no current way to pay her bills, and not many opportunities for accountants, because the firm who had just fired her was also the most popular accounting firm in the country. And seeking work wasn't as easy for her generation as it was for, say, her gram'pa who walked into his workplace at seventeen and had a job until retirement.

While Kathi waited for her pie and coffee, she searched for anyone looking for accountants. Anywhere. And that was how she heard the people in the next booth.

"Someone's gotta be tickling the take," said one. "This ain't the regular total. Were fifteen short, here."

The other one sighed. "These books are a mess."

Someone was playing her song. Kathi extracted herself from her booth and hovered on the border of theirs. "Excuse me," she said. "I couldn't help overhearing you... uh... I'm an accountant and I could -uh- help you out?"

They were wearing nice suits, and one of them had a shaved head. The other one was all muscle and build like a brick mortuary. "We don't do 'official', lady."

"That's even better," said Kathi. "I'm between jobs at the moment. Well. Finkel and Voss let me go, so I can work for your business at under the market rate. And since this is a worth-proving exercise, I can take sorting out your mess for the cost of my coffee and pie. Deal?"

Bald Guy looked to Brick, who shrugged. "Awright," said the bald guy. He shuffled a bunch of papers and books together. "This is one month. Figure it out."

Most of it was looseleaf, interspersed with random note pads. Her favourite kind of unfucking. "Great," she chirped, undaunted. "Detective work."

It took her four hours to sort it out. Even the stuff that seemed to be made to confuse the eye. Coloured highlighters. That was always the key. And since they didn't do 'official', she started a brand-new paper ledger and colour-coded the contributors. The 'fifteen' these fellows were missing was fifteen thousand dollars. Not a small amount, but Kathi was used to seeing billions siphoned away by assorted leeches on company finances.

"Gentlemen, there is a pattern here," she said. "For some time before these records, you have had... a mouse problem. It's a metaphor. One mouse might be cute, and they don't really eat a lot. You can deal with one mouse, no problem. Not a lot of loss. But a plague of mice? They can nibble you to death." She handed over the eye-confounding looseleaf. "The person or persons who has been handing you these? They have been gradually increasing their peculation, to see how far they can go without being noticed. And I suspect that they've done this more than once."

"Tony," said the big guy, whose name was Cliff.

"Now, since this is repeated behaviour, and he's in charge of a subsidiary, I'd suggest a clean slate. If his employees see their boss taking from the parent company, they could easily believe they can do the same. And in order to prevent panic or a market share drop, give everyone their notices just before they take their holidays. Don't give them a chance to contact anyone else. Wipe the entire slate, start over with new blood."

Cliff boggled at her. Whistled low. She'd made an impression.

"You're cold, lady," said Harry. "I like it. Tell you what..." he took a slip of paper out of his own notebook and jotted down an address. "You come here next Monday. We got more -uh- sortin' out for ya. At regular wages and a cut of the -whatchacallit- peculation."

Holy shit, that was the best deal she had ever heard. "Mister, you have yourself an accountant." Even at ten percent, she could have her personal finances sorted out in no time.

The address was an empty office space and she had another bulky muscleman in there called Clarence. Whose job it was to get Kathi anything she needed. And her work was boxes upon boxes of sloppy book-keeping. And these people were paying her by the results. And they were now insisting on paperwork.

The end result was successive walls of madness as she organised, filed, recalculated, and in desperate measures, rewrote their books for legibility. There were little mice all over the place. Nibbling the greater organisation to death. The low-level vendors were never a problem, but it was the finance collectors and the bank they used that was the real problem. As well as more than a few people who were using the company slush fund as their checking account.

Severance was necessary for more than a few employees. The company policy of loyalty to long-term crew was sweet, but in the long term, it wasn't financially stable. And, once she got hold of the employee financial records, she spotted another avenue of trouble.

So far, she spotted two dozen employees who were being financed for leaking company secrets. Names that she typed up for Clarence, who would take it to the CEO's, who would then take care of things.

Meanwhile, somewhere in the depths of the FBI...

"We have a new player on the board," said McTavish. It was a black silhouette. "They call him 'the accountant', and is singlehandedly tightening the Jorgins' organisation. They've started an internal bloodbath."

"What's the problem? Less thugs for us to worry about."

"He's also identifying everyone who's talking," said McTavish. "Everyone we pay for information? They're turning up in landfills, fishing nets, and junk lots. Everyone who we encourage to sabotage the organisation? They're doing the same. He's making this mob's security tighter than a frog's ass and nobody knows who he is. He's never seen with the Jorgins crew. He's not a supervisor. He doesn't talk to anyone. All we have is some type-written notes and fingerprints that are so clean that they might as well come from a saint."

"Everything's on paper," said Caulky, head of the IT department. "You can't hack paper. And these people are all switching to notebooks. They're being disciplined for legibility. And they have drop boxes so that their records aren't taken by law enforcement agents. By the time we get there with a warrant? Those records are long gone."

"But there is a lead of sorts," said McTavish. "We have reason to believe that Jorgins is now using the old pneumatic tube system. The problem is that in order to hijack it, we have to find it. And the instant we go sniffing around in old basements and steam tunnels? They're going to change the data flow."

"They may have already done so," said Caulky. "We've noticed that their front businesses, bakeries and food delivery services in particular, have stepped up their business. They're not just laundering money, they're taking boxes to all kinds of Jorgins establishments... as well as the regular everyday folks."

"Things are moving faster than we can trace," said McTavish. "And it's all because of him." Tap, tap, tap on the silhouette. "They have to be some kind of criminal genius. They've even got the Jorgins crew filing their 401K's. With some cute euphemisms for their actual jobs."

"Security, Internal Investigations, Deliveries, that kind of deal," said Caulky. "They're making it all sound... legitimate. Drugs become pharmaceuticals, he even has an R and D department. And worse... we think they've started buying up legitimate investments all over town."

"We can't even find a parking ticket on this guy," complained McTavish. Completely unaware that they couldn't find her because she took taxis or walked everywhere she went, obeyed the law, and had no idea that her 'severances' were actually executions. That the most ruthless and efficient crime lord the city had seen was a mild-mannered accountant who did Pilates on the weekends.

So the ones that have no idea are the most dangerous? XD

More like accountants are highly trained in the ways of sociopathy, but... almost. Yeah.

Love it! Dude, that's my kind of job.