INVINCIBLE Part One: Blood and Fire 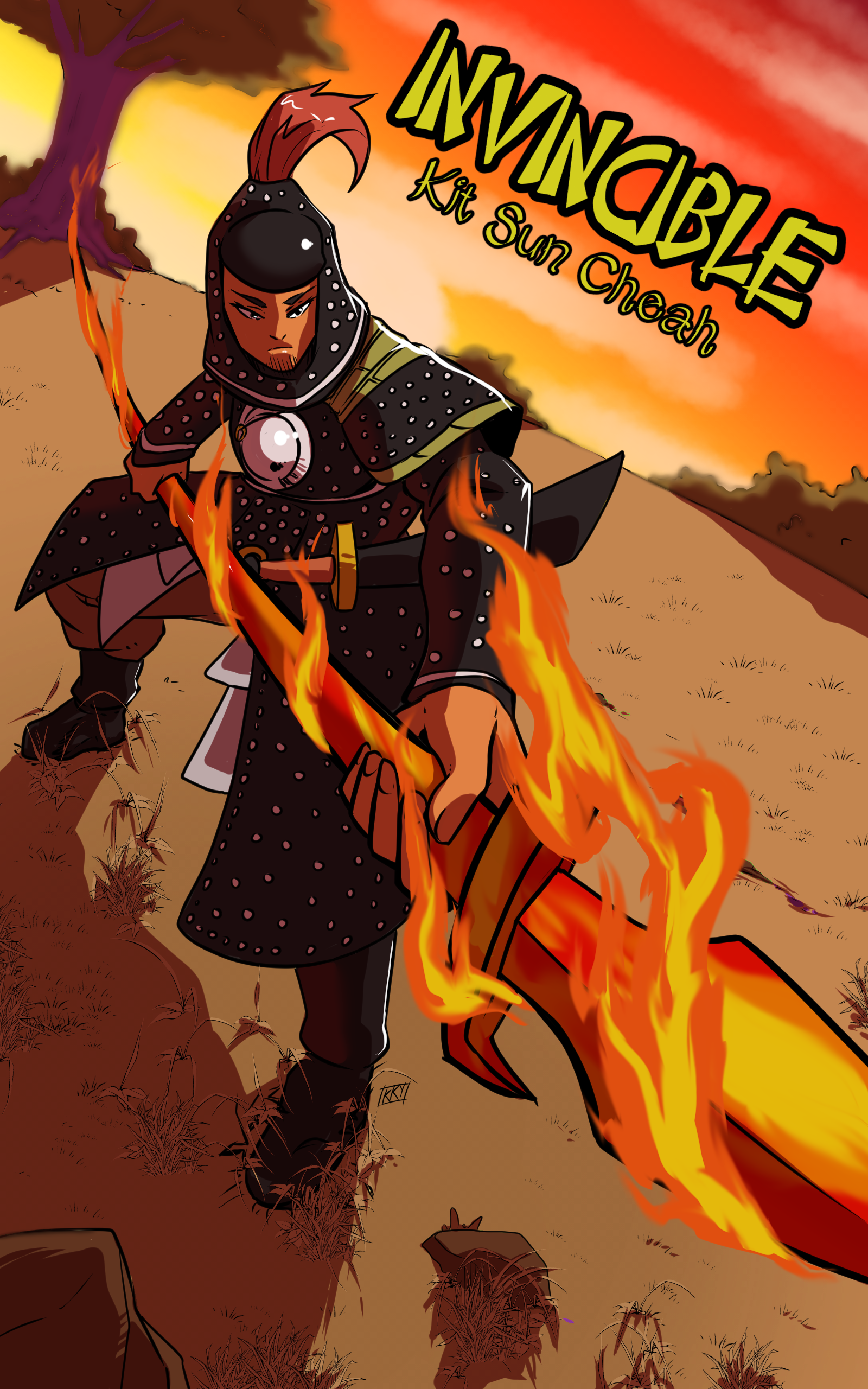 Zhang Tianyou hated working with internal troops. The Shenwujun did all the hard work, while they claimed all the glory.

Zhang lowered to a knee, steadying himself against a hardy tree. By the light of the crescent moon, he saw the rebel encampment, two li away, situated by a burbling river. Defended by a thick wooden palisade, it boasted four guard towers and a gun pit at either entrance. A tough nut to crack, for the internal troops.

For Shenwujun, it was nothing.

Ten Shenwujun gathered silently around Zhang. Their leader tapped Zhang’s shoulder. Zhang nodded. Lowering himself to the ground, Zhang began the long crawl downhill and towards the southern gun pit.

Grass tickled his cheeks and brushed against his jet-black armor. The scent of soil filled his nostrils. Zhang moved carefully, his fingers probing the earth ahead. Whenever he found a rock, a twig, anything that might betray his presence, he gently set it aside. If it were too large, he crawled around it. Every so often, he lifted his head above the grass, just enough to check his bearings.

A cry of alarm.

He snapped his head up. Had he been detected?

The internal troops had arrived. Two columns of men spilled out of the forest and wheeled towards the camp. One headed for the southern entrance, the other to the north.
The fools had attacked too early.

Rebels cried in alarm. Drummers pounded out a call to arms. The internal troops picked up the pace, but they were still too far away.

No more time for subtlety.

“Hong Er!” he whispered. “Lend me your strength!”

A warm female voice filled his mind. Who will you burn today?

“Rebels. Murderers, robbers and rapists, all of them.”

His skin crackled. Invisible fire coursed through him, radiating from his crown and flowing to his hands and feet. Auras appeared in his vision, betraying the enemies’ presence.

In the gun pit, the rebels scrambled into action. There were three of them: the gunner, the loader, the powder-man. Together they crewed the wall-gun. It was six miniature cannons, braced by a thick wooden shield. The loader stuffed a shot into the breech of a gun, then moved to the next. The powder-man poured a measure of gunpowder into the loaded barrel. The gunner readied his matchbook, checked the load and aimed the gun.

None of them saw him coming.

He sucked in a breath, absorbing the qi in the air, and transmuted it to fire. His dantian, three thumbs below his belly, turned warm. He pointed at his target. A stream of red light pulsed through his arm. Downrange, a tongue of flame caressed the gun-pit’s powder store.

A bright flash split the night. Fragments of men and metal flew in every direction, whizzing past his ears.

The other gun pit exploded. Zhang looked up at the guard towers. Dry snaps rippled from the timber. The wood warped and flexed and broke. All at once, the towers collapsed.

The Shenwujun behind Zhang caught up, unhooking hand bombs from their belts. They lit the fuses and tossed the iron spheres over the palisade. The bombs erupted in fire and sprays of metal, producing thick clouds of smoke. Men cried in pain and alarm. Commanders yelled hasty orders. The drummers went silent.

The fire withdrew from his body. Before him, fresh crimson flames appeared, forming four trigrams arranged in a cross. The three solid lines of Heaven, the two solid and single broken line of Wind, solid-broken-solid of Fire, and broken-broken-solid of Thunder. Together they represented Hong Er’s essence. In the center of the formation, he caught sight of a complex geometric shape—her true name, not the nickname he had given her. The symbols converged, colliding in a burst of light.

His vision cleared. Before him stood a phoenix blazing in brilliant scarlet.

“What needs burning?” she asked.

“The whole camp and every rebel in it.”

She spread her wings and took flight. Orbiting the camp, she shrieked, releasing a shower of feathers. Each feather turned into a flaming arrow, raining from the sky. She was a celestial spirit; she would never miss. Every single fire feather would find a target, and every target would die.

Bellowing war cries, the internal troops charged. They were poorly-trained and ill-disciplined, their formation widening and falling apart. The men didn’t even have firearms, just spears and crossbows. Zhang prayed that the other unit at least had the sense to take up blocking positions at the other entrance, well out of their comrades’ line of fire.

All the same, he positioned himself on the right side of the camp’s entrance and touched the interspatial ring he wore around his neck. A wealth of images flooded his mind. He focused his intention on one, and held out the black jade ring in his left palm. A small black sphere opened above the ring. Reaching in, he pulled out a repeating crossbow and rested the butt of the weapon against his belly.

“Form up on me!” Zhang yelled. “Crossbows out!”

The Shenwujun obeyed, forming two ranks of five men. The front rank knelt, the rear stood. They readied their repeating crossbows, preparing to intercept anyone trying to flee.

Beware! Hong Er spoke in Zhang’s head. The enemy has—

Black spikes tore up from the ground, ripping the column of internal troops apart. Men tripped and fell over each other. Others fled from the hostile magic.

Twenty rebels burst out of the camp, yelling a war cry. Black qi danced around them, staining their auras.

Even as she spoke, she danced in the air, dodging dark spikes and arrows. These rebels had the same powers of Shenwujun, but granted by infernal spirits.

They were the top priority.

He punched the firing lever down. The crossbow jerked, loosing a bolt. He pumped the handle as fast as he could, throwing bolts downrange, faster than a musket could hope to match.

A hail of bolts slammed into the rebels. A few staggered, dropped, fell. The survivors screamed, turning towards the Shenwujun. Some had bolts sticking out of their bodies, but they continued running like men possessed. Dark qi flared around them. Supernatural wind yanked bolts from the air. Black flames wreathed men like shields, burning up missiles.

Around him, the Shenwujun loosed their powers, and the rebels countered. Clods of earth broke away, levitated, and fell back to the ground. Bolts spiraled away at impossible angles, or shattered against flesh as hard as metal. Hong Er flung a fireball at a rebel. Flames coated him for a moment, then disappeared in a blast of steam. The rebel shouted in triumph—then sank to his knees, his chest and face peppered with bolts.

Only ten enemies remained on their feet. They were just thirty paces away. His crossbow was empty. No time to reload.

“KILL!” the Shenwujun roared, their voices booming across the land.

As one, the Shenwujun charged the scattered rebels, keeping their formation tight. Zhang engaged a rebel armed with a spear. The enemy aimed his spear at him and hesitated.

Reeling his spear outward, he batted the offending spear aside. He stepped in, thrusting at the man’s throat. The point touched his skin, then bounced off as though it had struck steel. The rebel stepped forward—and collided into his spear’s crosspiece. As the rebel stumbled, Zhang yelled, focusing his qi into the spear, and thrust again. A moment of resistance, a flash of golden light, and the spear pierced deep and true. The man fell, gurgling, clutching his neck. Zhang stabbed him once more, and the rebel went silent.

Zhang scanned for more threats. His comrades had made short work of the remaining spirit warriors. But the internal troops continued to flee.

“Cowards!” a Shenwujun called. “Come back here! The enemy is—”

A monstrous roar cut off his words.

The giant brought the club down. The men fled just in time. The world quaked, dust rose, and a fresh crater marked the point of impact.

It was a powerful creature. It would give even Shenwujun pause. But it was a being of the metal element. And fire melts metal.

Spreading her wings, Hong Er dove to him. Dropping his weapon, Zhang spread his arms to receive her. She flew into his chest, merging into him. Holy fire coursed through him, renewing his strength. His body ignited in ethereal flames, as bright as a furnace. He opened his hands and focused. Fire gathered in his palms, expanding and solidifying, transforming into a spear.

“I’ll deal with this one!” Zhang called. “Complete the mission!”

The Shenwujun sprinted around the giant, heading into the camp. The giant ignored them, turning to Zhang. Raising its weapon, it stepped into range.

Zhang aimed at its head, focused his flames on the tip of the spear, and unleashed a firebolt. The creature stumbled away, covering its wounded face. Zhang drove forward, plunging his spear into the giant’s thigh. Steam and gray fluid gushed forth. He withdrew the weapon and the giant swung down at him.

Zhang pointed his weapon to the sky, ran between the giant’s legs, and carved through its lower torso. It howled in pain. Zhang swung around, slicing through the back of its other leg.

The giant toppled like a dead oak. Howling in pain, it crashed face-first into the ground. As it struggled to get up, Zhang thrust through its skull. It abruptly went limp. Its flesh rippled and bubbled, and the creature dissolved into a metallic lake.

Zhang dashed into the camp. The Shenwujun had harmonized with their bond-spirits, wreaking havoc among the enemy. Whips of fire lashed through the rebels. Tents and barricades rotted and crumbled. Earth lances and water jets tore men and structures apart. Some rebels fled to the other exit, where the remaining Shenwujun destroyed them.

In the middle of the camp, he saw a summoning circle. It was drawn in blood, surrounded by inscriptions in a strange language. At the four directions, a totem stood, each spattered with blood and decorated with skulls and bones.

It was currently inactive, but nobody wanted to take any chances. The Shenwujun attacked the totems with everything they had. Wood blackened and crumbled with supernatural rot. Metal axes materialized and hacked away. Zhang extended his palm towards the nearest totem and unleashed a fireball. In moments, the totems were obliterated, and the circle neutralized.

Zhang rejoined his men, scouring the camp. The rebels had been slaughtered to a man. One by one, the Shenwujun’s commanders sounded the all clear.

Now, it was over.

“Hong Er, thank you for your help. I release you.”

The fire faded. Fatigue flooded his body. His mouth dried in an instant. His head throbbed, his heart pounded in his chest, and his skin was hot and dry.

He sat, drew out a calabash of water, and drank. Drank and drank and drank until there was nothing left. He was still thirsty, but his temperature was dropping to more human levels. He grabbed another calabash and sipped at it more slowly. Humans were never supposed to house the full power of a celestial spirit; there was always a price to pay for harmonizing with one. Around him, other Shenwujun sat also, and tended to their bodies.

As he drank, he stared at the blackened spot where the totem once was.

Hong Er’s voice filled his mind. I’ve never seen humans use blood magic like that before. Isn’t this the trademark of the wangliang race?

Zhang nodded. And wangliang and humans don’t get along in the Empire.

It seems your life will become more...interesting.

Zhang snorted. He finished his water and got up. His muscles were sore, his joints stiff, but he still had work to do.

For more long form fiction by Hugo and Dragon Award nominated writer Kai Wai Cheah, check out NO GODS, ONLY DAIMONS on Amazon.

I see the writing really paints a picture. Quality!