Necessity, the Mother of Invention

Military inventions often go on to live a civilian life. For example, the internet developed out of a Department of Defense project, as well as GPS systems. Major wars often seem to accelerate the pace of technology as well, as armies try to find new ways to keep their soldiers alive and comfortable, and seek new advantages to use against the enemy. WWII, for example, saw the invention of radar, jet engines, pressurized airplane cabins, synthetic oil and rubber, instant coffee, the earliest computers, the cruise missile, helicopters, and even the VW Beetle and Willys Jeep. WWI saw some inventions as well. Many, like tanks and flamethrowers, were purely military, but some saw civilian use as well. Ad for Kotex. Notice the description of its origins. Photo Credit: Museum of Menstruation

One of the major war supplies new to WWI was a new type of padding for dressing wounds and stopping bleeding after surgery, called Cellucotton. French nurses realized it would work well to absorb menstruation bleeding too, and soon American nurses adopted this practice. After the war, maker, Kimberly-Clark, used Cellucotton to create Kotex pads specifically for this purpose. However, they faced challenges in actually selling it to women, as many didn’t want to buy them from male sales associates. Kimberly-Clark initially suggested putting money into boxes to fix this problem, but they hit true success after convincing Montgomery Ward to sell it in their catalog. 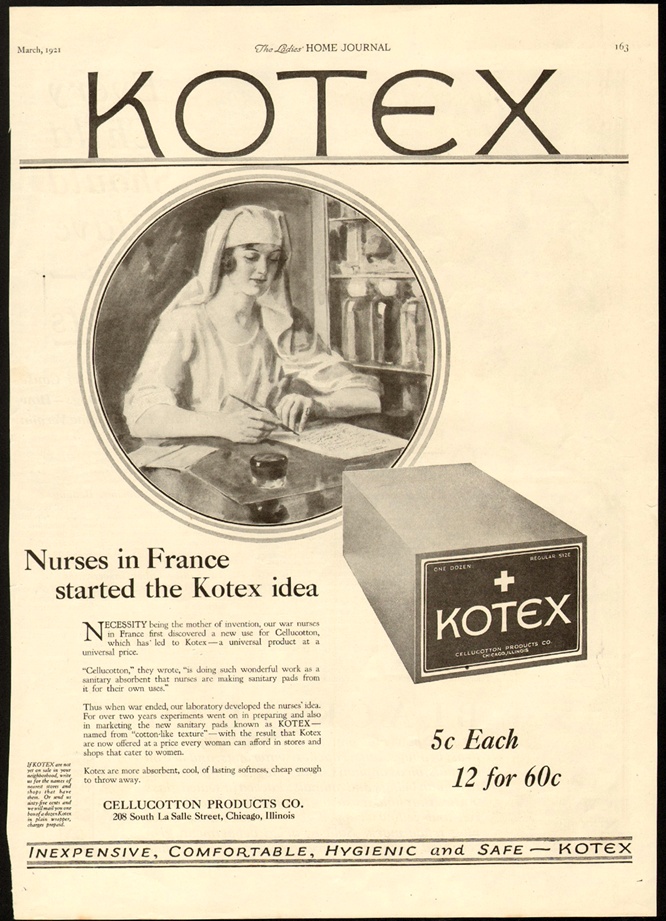 I think this is interesting, but I see it from another angle. One could argue that the "necessity" for a better-absorbing menstrual hygiene product had literally always existed... but that it wasn't until the medical needs of men fighting in the bloodbath of the Great War necessitated a similar solution that someone invented and marketed a specific consumer product that would do just that.

I agree, originally I was going to discuss multiple inventions in one post with the title applying to them generally. Anyway if you're interested the Museum of Menstruation website even discusses how the ancient Egyptians handled this necessity.

Ah, ok I can see that- I like the idea for a multi-part series. Thanks for the link, it's quite... in-depth

I'm really interested in the marketing history here. Today so many products are unnecessarily gendered. Menstrual products are sold specifically to people with vaginas, but this is a nice insight into their origins as something that is truly gender neutral (wound dressing), though it was originally marketed towards men. Thanks for sharing!

Great stuff. I'm curious about the steps you went thorough to find this gem. How we generate ideas for posts can be as valuable as the posts themselves, in a way. Don't you think?

I agree. For this I started with a list of WWI inventions, then picked the one that had the an interesting story and most applicability to everyday life today. From there I searched for sources and images to craft my post.