Life would be so much easier if it was like a formulaic blockbuster movie. It would be so easy if you knew if someone is the villain or the good guy the second you met them. But life and people are never that simple. Somebody might be doing a ton of good while still doing something that seems pretty bad at the same time. And you can never be sure you see the whole picture. That's especially true when supporting causes, charities and initiatives. Many have awesome mission statements and appear to do good, but in an imperfect world, nobody is perfect. Sometimes it makes sense to just stomach the possible side-effects and risk and just give, hoping that what you give would go mostly to truly making the world a better place. Unfortunately, there's always the chance that the money or support you provide will be misused and in a world full of gray areas, it's sometimes hard to even tell if this is happening.

Let me give you two examples of otherwise great charities doing something that might cause you to raise an eyebrow.

The Susan G Komen Foundation seems like a well-run charity that manages to do a lot of good for breast cancer in all kinds of areas. They support research, treatment, prevention, screening and education about the topic and have managed to secure a lot of money and resources for their cause. If you look at what they have achieved, you could say they surely have things to be proud of.

But they, too have had their missteps or things that might make you wonder whether everybody there has their heart at the right place. And I'm not even talking about controversies connected to huge corporate sponsors gaining positive publicity and possibly even profiting by supporting them, the money their CEO is making, or endorsements of possibly carcinogenic products. And that's because there is an example that's even worse. 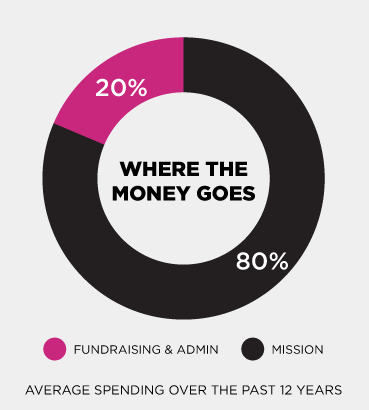 The graph on the left shows that 80% of the money they raise goes to their mission and only 20% goes to fundraising and administration. Unfortunately, part of that administration money has sometimes gone to the organization suing smaller charities. The The Susan G. Komen Foundation has registered the phrase "for the cure" as a trademark and they are happy to sue other charities using something similar especially if there is a pink ribbon involved or even just the color as they view it as theirs, too. There are real money being spent by the foundation for legal action and the smaller organizations coming under fire also have to spend money, time and resources fighting those cases. It seems that sometimes protecting their brand seems more important to them than spending the money on their mission. And that's keeping in mind that they don't always win their many lawsuits. If you are giving money to them, would you be OK for it being spend to fight smaller charities in court for a phrase that's honestly generic? Maybe?

Doctors Without Borders Might Decide Not To Save Somebody They Can

Medecins Sans Frontieres, or Doctors Without Borders are a really awesome organization that has been doing good around the world for a very long time. They have integrity and they are truly making a difference.

Some of the places where they operate are pretty dangerous and sometimes people working for them end up in the custody of terrorists. And as you would expect in those cases, the organization does whatever it can to save those people and it often succeeds. But the catch is that you have to work for them officially. Kayla Mueller and her family had to learn about that policy the hard way and it's a pretty dark story. She went with her significant other to Syria where they were installing some hospital equipment. Unfortunately, she got captured by ISIS.

Nope, I don't have a conclusion here. The world is not a black and white place and while the actions of those charities might not seem right, there are certainly ways to justify them. But are they truly justifiable? I really don't know. I was honest in the tittle, supporting charities in a world that is not black and white isn't always easy. But could you say that a few missteps (if those qualify as such) mean that a charity is not worth supporting? I don't know, it's probably still better to give. The good seems to still outweigh the bad, right?

For instance, Kayla Mueller's family, while being devastated by what happened to her, ended up donating $120,000 to Doctors Without Borders who refused to save her as this was the cause she died supporting.

Interesting post. This is something I wrestle with every time I cross the street to avoid someone collecting for Greenpeace or one of the big Irish charities like Gorta or Trocaire.
Charity is good....I want to give....surely the good outweighs the bad .....BUT what about the plush offices in landmark buildings in only the best parts of town, and then all the stuff you mentioned CEO salary, corporate endorsements etc?
So, to assuage my conscience, all of my charity goes to organisations working at the coalface here in the city, principally homeless and animal rescue charities.
I know, if everyone thought like that Amnesty and the like would be buggered.

I tend to end up giving too, but I always wonder what part of what I'm giving will end up supporting the real cause. Of course, you can't have an organization without any overhead and it's obvious that the people who made this their career need to support themselves too. To make it even more difficult, charity fraud is still not uncommon here in Bulgaria, so it always requires double-checking unless you know the organization. And any organization is capable of a bad decision here or there, but this doesn't mean they are not worth supporting. Gray areas everywhere...

This is the same dilemma I'm always in when I see people collecting to save someone's life. Some show you pictures while some take the actual sick person (mostly children... Everyone likes kids) with a swollen part of their body quite visible. I've heard stories of the children just used to collect the money and later sent to where ever they were taken from. This makes me wonder who to give or not to give. When I don't give I feel guilty and when I do give, I wonder if it's being put to good use. Unfortunately we live in a world of uncertainty and until that changes (if it will), I'll do what my gut tells me at any given moment. I think you just said the minds of most people.

Unfortunately, the type of charity scams happen way too often. They are rampant here in Bulgaria, too. One of the worst things I know about is when homeless beggars actually have managers who collect their "earnings" under the threat of violence. That's why I'm sometimes weary of leaving them money, but I'm always happy to buy them a meal as this is something that cannot be stolen from them at the end of the day.

We should always do our due diligence before giving, but this shouldn't mean we never give. After all, everything comes with its own risks in this world.