Early Chilean Baptists Supported by Libertarian Ones from America

The early Baptists that arrived in Chile likely brought with them some strong libertarian tendencies. Southern Baptists were the first Americans to support Chilean Baptist works in 1917. Accordingly, there was probably a tacit link with to the influential activism of Pastor John Leland, who preached thousands of sermons in Virginia and took an activist role in both the association of Baptists—that would later send missionaries Earl and Mary Davidson to Chile (see page 27 of the missionary list)—and the promotion of libertarian ideals for the newly-formed United States. The would have certainly been influenced by Southern Theological Seminary men like Eduard Y. Mullins and A. T. Robertson, with perhaps some lingering ideas from preaching expert John Broadus and historian William Whitsitt. Indeed, it is unlikely that American Baptists sent socialists or communists to Chile, and surely not any pacifists.

According to Ricardo Becerra Inostroza in Invitando a Conocer la Historia de una Comunidad Cristiana (2006:18-22), (which translates to "An invitation to know the history of a Christian community"), the first Baptists arrived in Chile in 1884 from Hamburg and Berlin, Germany. More followed in 1892, establishing a church in the southern 8th Region in the town Contulmo, and then spread to the western 9th Region, with the second church in "El Salto" (north of Temuco) opening in 1894, with others soon being established in Quillén, Púa, and Victoria. They preached in German and struggled to preach in Spanish, which had to be improved over time. Their main goal ended up being to evangelize German-speaking Roman Catholic immigrants that had settled in southern Chile. Similarly, English-speaking Baptists William (Guillermo) MacDonald and his wife Julia arrived from Scotland in 1888, having been invited by Chilean President Balmaceda to serve as a professor in the English colony in Púa (between Victoria and Temuco). He was paid by the Bible Society in Valparaíso started by Presbyterian (and Mason, Pereira, page 12) Dr. David Trumbull and received a parcel of land in Freire from the Chilean governemnt for his efforts. MacDonald ended up establishing Baptist churches from Victoria to Valdivia, and then jumped further south to Chiloé island.

Of course, before 1925, Chile was an officially Roman Catholic country and, as such, it was illegal to preach the Gospel in Spanish—even though legislation in 1865 y 1883-1885 had permitted private worship by Evangelicals in homes. As usual, the early Chilean Baptists found themselves outside the law for preaching the Gospel illegally, starting perhaps around 1895 when they began to hold Spanish-language services. They also faced other threats. The region was still a wilderness full of hostile Mapuche Indians, and it is likely that the Baptists were armed and ready to defend themselves if necessary—just like all the other European settlers around them from France, Belgium, Italy, Britain, Switzerland, Germany and elsewhere. 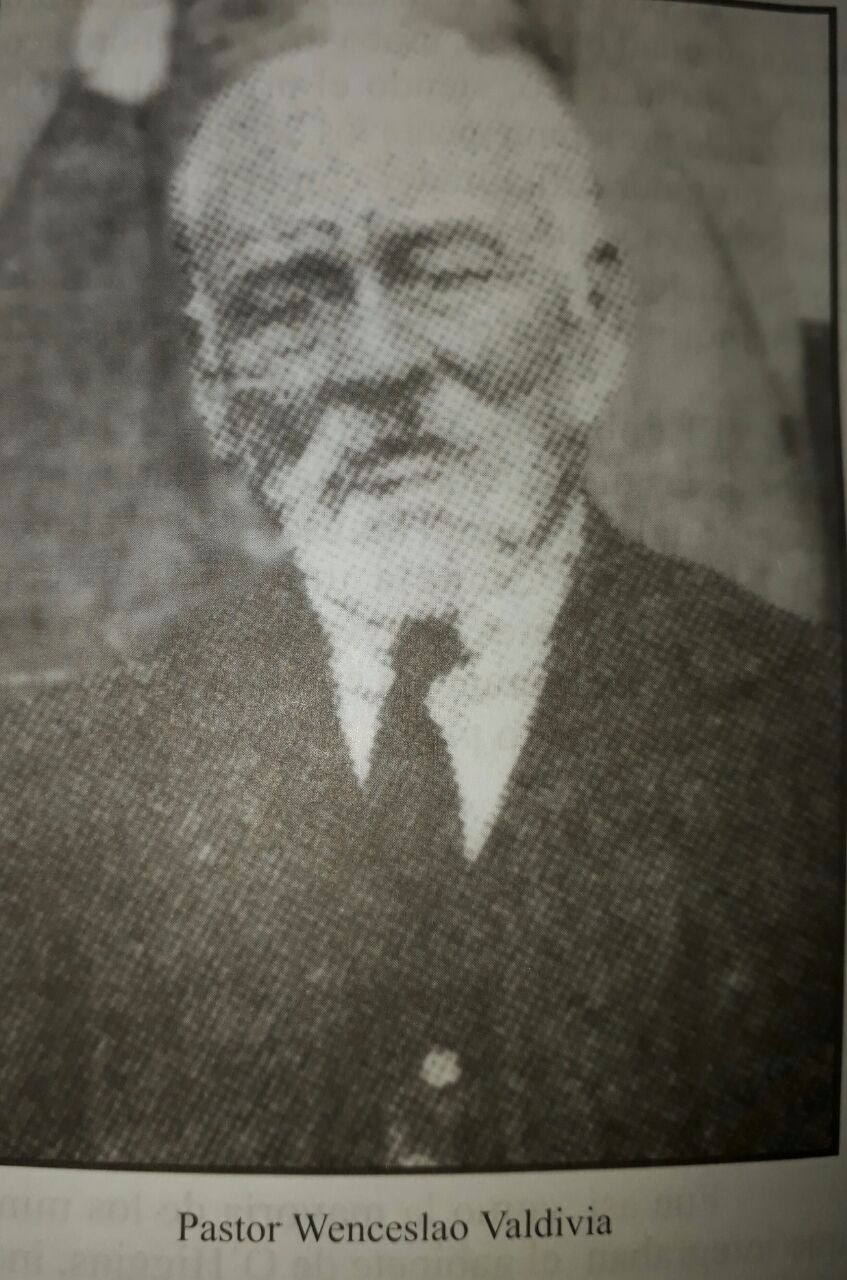 Isaías, who was the founding pastor of the first Baptist church in Valparaíso (1936), eventually went to New Orleans Baptist Theological Seminary for further training and never returned to Chile. He and his father were probably close to the core doctrine imported by the Davidsons (and probably the other missionaries from Virginia in Chile at the time: Joe Hart, Robert Moore, Frank Marrs), presumably trained by calvinistic Baptists and libertarians in Virginia, and whom presumably would not have been opposed to employing self-defense against menacing Indians in either the United States or Chile. In a recent blog entry about Pastor John Leland, who ministered in both Virginia and Massachusetts, I concluded:

...early American Baptists like pastors Leland and Backus would not have been opposed to carrying concealed weapons, much to the chagrin of some of their modern progeny in Europe, North America and South American countries like Chile. Were the historical Baptists right regarding taking up arms in self-defense? How different would modern countries in North America, Europe and South America be if Baptists would only adhere to the doctrine of Christ and corresponding Worldview championed by their activist Baptist predecessors?

While the ends do not justify the means, it is quite clear that Baptist prosperity since 1790, including Bible-based seminaries and the enormous missionary surge over the last two centuries—along with similar blessings that spilled over to many other groups—was built on the defensive actions of activist Baptists. The courageous American Baptists of the late 1700s may have originally aligned themselves with Presbyterians (mainly) and others like the "black robe regiment" Lutherans during the battle for freedom in Colonial America, but they later stood alone when insisting on protecting the rights of men generally via the Bill of Rights. Accordingly, libertarians in North America, Chile, Europe and elsewhere around the world owe a debt of gratitude to Baptists, the most libertarian and neoliberal of all the branches of Christianity.

I do not know for certain what the Davidsons or Canete believed, but given what I do know about the history of Virginian baptists (in the tradition of Leland), and other southern baptists of that 1880-1920 era in North America and Europe, it is likely that the missionaries from the South and sponsored by the Foreign Missions Board in Richmond, Virginia brought a relatively libertarian and calvinistic perspective to the Valdivias and other Chileans. Nevertheless, modern Chilean Baptists generally know little of the Valdivias, close to nothing of Leland, or even much about the support from the Virginian Baptists initially given a century ago—bolstering Chilean Baptist churches. Looking at how weak Chilean Baptist churches are today, replete with their theatrical acts, charismatic tendencies, arminianism, pacifism, and women in leadership or coordinating the services, one can imagine the Valdivias turning in their graves.

Are Chilean Baptists anything like John Leland and their libertarian-minded, calvinistic Virginian forefathers? Or are they courageous like the Valdivias, Canetes or Davidsons? When considering a bacon-and-eggs breakfast, we see that the hen sacrifices a lot (her egg), but the pig is committed to the ultimate sacrifice to get the job done. The American Founders were committed like "pigs" are, especially the Baptist ones. Are Chileans more like "hens" or "pigs" in this sad scenario today, wanting to fight for liberty and historic Baptist doctrine? The question is rhetorical. The obvious implication is that Chilean Baptists would do well to learn their libertarian and calvinistic roots, reconsider the biblical doctrine that makes them distinct and their message powerful, thereby moving forward once again to transform their culture. Errata: A few weeks after publishing this article, I found that the following statement was partly incorrect (but Steemit rules did not permit changing the article): "...according to the biography Wenceslao Valdivia: Primer Bautista Chileno (1947). This book was written by his son, Pamela's maternal great uncle, Pastor Isaías Valdivia Sanhueza in Valparaíso....Isaías, who was the founding pastor of the first Baptist church in Valparaíso (1936), eventually went to New Orleans Baptist Theological Seminary for further training and never returned to Chile." I made an inquiry to New Orleans Baptist Theological Seminary, and they confirmed by email that Isaías was with them "from 1926-1932. It appears that he received a two-year certificate in Missionary Training in 1928 and a three-year diploma in Christian Training in 1933." Their records also show Isaías was a high school graduate and, since Chilean Baptist pastors’ kids studied for free with the school set up by missionaries in Temuco, it is plausible that Isaías graduated from there and also learned to speak English there. The seminary record, graciously provided by seminary Registrar Shaun Grunblatt on April 24, 2018, puts Isaías going to New Orleans at age 27, a few months shy of 28, studying (in English) for five years at the Baptist Bible Institute (that was the seminary’s original name before being changed to New Orleans Baptist Theological Seminary in 1946) where he earned the aforementioned two undergraduate credentials, then returned to Chile to become the first pastor of the First Baptist Church of Valparaíso on March 15, 1936 and later wrote the book about his father from that same city in 1947. Church records from Valparaíso and Ancestry.com indicate that he was married to an American named Oline Gregory (sometime after the 1930 Census was taken where she was listed as being single) and that their first child Jerry returned to Chile with them, when the couple apparently had another son, Jaime. The Valdivias returned to the United States in 1947 or in 1951 (just after the new church building was inaugurated). During his first nine-year stint in the United States, Isaías was involved in (perhaps a Hispanic ministry with?) Coliseum Place Baptist Church in New Orleans. He apparently lived the rest of his life in the United States, dying in his wife's hometown of Grayson, Texas on December 1, 1978, although that fact has yet to be confirmed. Note that Isaías Valdivia was born in Gorbea (near Temuco) on January 7, 1898 (U.S. Social Security records say 1897). He entered the Baptist Bible Institute on September 15, 1925. Some will wonder how His father was born only eleven or twelve years earlier than him (1886). The reason is probably that the Chilean civil registry did not begin until 1885 and thus there was no record of birth dates before then. If a family would arrive to register in 1886, all of their birth years would be the same, parents and children included, according to the official record. Since other evidence (including photographs) indicates that his father may have lived into his 70s, it is plausible that he was already twenty years old when he was "born" in 1886.

Note that while the Virginia Baptists (and the Foreign Missions Board) sent Dr. William Earl Davidson to Chile in 1917, he himself was from Missouri, born just south of Kansas City, ordained due north of it, and spent most of his years of service (after returning from Chile) as a Bible college professor just north of St. Louis. Likewise, Joe Hart, Robert Moore, Frank Marrs were all sent out under the brethren in Virginia but only Hart was a native Virginian. The other two were born in Florida and Texas, respectively.

The intricate histories of the spread of liberty are fascinating, begging to be discovered and then to revitalize the interest in promoting liberty once again.

Sure thing! Thanks for commenting and upvoting!

These are fun ones to do...

yep,,these are fun once to do

i like biopic of liberty of any war,,,thanks for sharing

Really? Baptist spreading the Gospel is not really war.

thank you so much to share this great post. i know more information of liberty and feedom..

You're welcome! THere are so many little nuggets of virtue in liberty out there. We just do not hear about them much.

Thanks, it is great story dear. tghank for share great history of liberty.

Thanks for commenting! Glad you enjoyed it. It has been a cause of great excitement in my household and among Baptists in Chile that I know as a result as well.