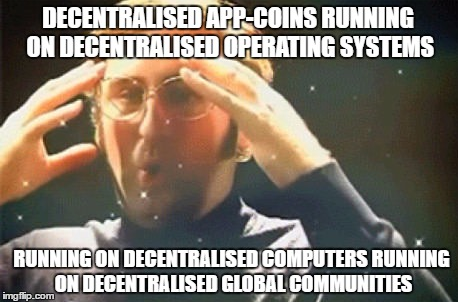 After watching Dan's presentation yesterday, I've been spending all day trying to comprehend the significance of EOS in the blockchain space. How different is it exactly, compared to so many blockchains out there? To begin with, I think it's best to first understand what an Operating System is:-

the software that supports a computer's basic functions, such as scheduling tasks, executing applications, and controlling peripherals.

It may take a while to appreciate this - EOS, essentially being the Operating System for blockchains will mean that it's quite like Windows / Linux / MacOS with built-in cryptoeconomic incentives. In short, a Windows with its own version of a frictionless Peer-to-Peer Electronic Cash System. It will also be able to host any app-coins asynchronously - just like the list of stuff running "at the same time" in your computer, looking at Task Manager. A decentralised operating system is somewhat a more focused product compared to Ethereum's decentralised computer. After all, computers can be installed with multiple OSes. App-coins running on EOS may be hardforked (or in traditional software terms, updated) without affecting EOS itself. The DAO incident back in 2016 may have been avoided if Ethereum was indeed designed more like an Operating System, instead of an all encompassing state machine. 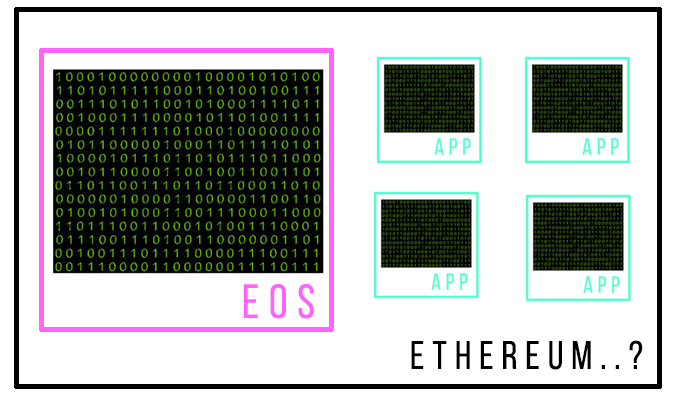 A slow computer will limit even the best high performance Operating Systems. So is a decentralised computer really necessary? The better abstraction (and focus) might be fundamentally a decentralised operating system.

Just like Windows, Linux, MacOS, etc, EOS may be on its way to becoming the most widespread consumer product that works. It hasn't proven itself in any capacity at all, but I think Dan has good experience and might've been onto good design philosopies with BTS and STEEM. Looking at the history of computing, I think the OS-perspective could be what it takes to truly bring blockchains to the masses.

The approach I propose for Smart Contracts can eventually support many different languages in parallel. The choice of language has more to do with getting a minimal viable product to market in a timely manner than anything else. Other languages will come in time if the platform proves successful.
by @dantheman on a scripting language called Wren

Wren is a scripting language. Wren is intended for embedding in applications. It has no dependencies, a small standard library, and an easy-to-use C API. It compiles cleanly as C99, C++98 or anything later.
part description of Wren

But all this is just me yapping away about something I don't know much about. The whitepaper is yet to be revealed. Anyway, looks like EOS is being back by strong confident hands, considering the EOS jumbotron in Times Square and being one of the almost-whalelike sponsors for Coindesk's Consensus 2017.

@kevinwong
I know you said you are still learning about this whole EOS thing and that's understandable...We all are trying to wrap out minds around it. Having said that, I think you did an excellent job in pointing out some of the important aspects of what EOS can and can't do.
The idea that a hardfork scenario wouldn't necessarily disrupt EOS itself is quite encouraging and a welcomed change. This is a perfect example of how we learn from the mistakes of the past as the cryptocurrency community evolves over the course of time. Keep up the good work and we'll be watching for more updates!

I hope I got at least some of the aspects right!

I feel quite sure that ya did, @kevinwong

I haven't finished digesting the video and other material, but found your article as I research about. What excites me so far is "OPERATING SYSTEM". This was the killer app that really launched the computer revolution.

I remember the days before Microsoft and Apple. In Electrical Engineering College we programmed the 6502 Microprocessor in assembly language. Computer Science was Paschal, LISP, Fortran or perhaps COBOL for the practical business people. All done on a dumb terminal in the computer room.

There were personal computers out there. You could do spread sheets, play games and Q-Link was a precursor to the Internet, sort of a glorified bulletin board. But with the advent of the general operating system (Windows and Macintosh), things really took off. Now you had it all; spread sheet, word processer, data base, printer, disk drives, maps, encyclopedias, whatever. You had a general computer and you just added the software to do what you wanted to do. The OS coordinated everthing.

Windows 2 came out in 1987 and now you were seeing computers in corporations everywhere. Bill Gates and Steve Jobs joined the ranks of the richest on the planet because they realized the value of a general OS. IBM, interestingly enough, missed out on the personal computer revolution. They did not see value in people having a personal computer. In a few years, it was the 90s and the Internet came along and the world has not been the same since.

The current blockchain/smartmoney situation is like the 1980s. Things are fragmented. There is a coin for this and a coin for that. Banks got their Ripple, Ethereum's got smart contracts, Bitcoin, a pure currency, rules the currency thing. Steem is a social media reinvented for the coming blockchain/Smartmoney world. Open Ledger is seeking to corral all the really big dogs. Solving the convergence of all these diverse factors is what an EOS could do as a general purpose computer blockchain operating system. And it's decentralized to boot;)

Exactly, my thoughts about this focus on the product. Not sure if UI / UX is necessarily at the core of it, I'd imagine it's more of the inner workings that'll make this a one-of-a-kind product! Thanks for the comprehensive response - seems like you've been through the hay days of computers and the internet!

Your comment should be its own post!
check out This video about if Bitcoin were around in the 90s


and my steemit post on 80s chatrooms and why we might have had blockchain in the 80s or 90s if someone would have thought it up and built it back then, i believe it would have been possible tto have a blockchain p2p money system with old apple IIes and BBS boards!
https://steemit.com/eighties/@ackza/why-wasnt-twitter-or-reddit-invented-in-the-80s-a-surprising-history-of-chat-rooms-i-had-no-idea-we-even-had-chat-rooms-in-the
$0.00
2 votes
Reply
[-]
transhuman (60) 3 years ago

Off hand, I don't think we had the computing power and memory in the 80s and 90s to make a cryptocurrency like Bitcoin for the common man. Perhaps, a DPOS blockchain or some new altcoin crypto that is not heavy on memory and CPU power.

We could have had something in the early 2000s perhaps. There was [email protected] which was one of the original distributed computer systems. If someone had thought up Nakamoto's system, there were enough computers and Internet users out there to experiment with a Bitcoin like system in the year 2000.

Dan is some kind of blockchain savant - Bitshares, Steem and EOS basically obsolete Bitcoin, Wall Street, Facebook, Reddit, Microsoft and Apple in one fell swoop. They are like the Blockchain Holy Trinity. BHT!

What is mind boggling is watching all these shitcoins - that don't really do anything useful and are not actually used by anyone - get pumped to insane valuations while BTS and STEEM aren't even in the top 10 market cap bracket. It is wild - look a the top 10: XRP, NEM, ETC, BCN, etc. Really? Wow.

Thank You 4 posting Your thoughts @kevinwong and agree with @johnsmith & @teamsteem. I'm 8 days new to steemit and especially liked the video presentation by Dan yesterday so much, that I resteemed it.

It's said that Great Thinkers have the ability to explain very complex topics in simple, layman's terms and I felt that is what Dan did yesterday not only with his words but with his slide presentation as well.

UpVoted & have been following @kevinwong & @teamsteem for a few days now. Thank You !!

addition to the thread for any who havent seen the presentation to save time going to look for it:

And here is a cliffs notes summary, if you would rather read! https://steemit.com/eos/@trogdor/introduction-to-eos-the-epic-blockchain-operating-system LOL decentralisation is too damn high!

I've been trying to understand eos better myself. This was helpful. Thanks Kevin.

Thanks for putting this together. I saw the video yesterday but you really put it in perspective.

I've never participated in an ICO, but I'll be a part of this one as long as there are no big red flags. I think EOS has the potential to be revolutionary.

Not sure if it's going to be an ICO, but seems like it'll be released on Yunbi and Bitfinex... both of which would require some KYC..

Hi Kevin,
Thanks for the explanation. It seems like a concept that could add value to all the blockchains out there.
As I understand from your post EOS isn't there yet? When will they release it?

Nope. So far they're keeping it under wraps. You may sign up on eos.io :)

Hello kevin ..
Your post has been featured in the latest issue of STEEMINT - The STEEM Intelligence Journal .. no biggie

Anyone else got slight insomnia because of this? :)

Full on insomnia for me hah! Because I hold eths too..

Is it just good fortune that I've chosen the moniker EGOS about 7 Months back?

Here's the sig I've been using. Now when I see EOS everywhere I'm like why are they talking about me? :P

The Everyday Geek on Steemit
EGOS.live

Hahah! To be fair, you're off by two letters in a three lettered acronym xD

Instant ambassador, a G in EOS :)

Thank you, this helped!

very interesting, thanks for posting - Subbed!

Which one to find them? :D

EOS, will soon develop A.I. capability and rule us all :D This shit is really looking insane. Stoked on EOS. It's worth it to read though..

And they will call it 'The Matrix'. Though more seriously, if Microsoft is in on it you can rest assured it will be difficult to buy a computer in stores that doesn't have it pre-installed. Well, eventually.

I want to try EOS

i cant wait for it.

Is it possible to buy EOS tokens or coins anywhere?

Not yet, make sure you subscribe the newsletter here: https://eos.io/

Excellent job, i follow you and resteem this one

It's human tendency thay they oppose new things. Many opposed steem, also they called it some Ponzi scheme. Steem is running successfully all over the globe.

Thank.. I'm sharing this to my telegroup

waiting for a linux EOS distro :)

it's going to be yuuuuge~

Thank you for posting this. 7 months later and still relevant in my journey of developing apps for crypto. Thanks for pointing me in the right direction.

updated sharing is great, this post made me happy, I am grateful to you.