It has been about 6 months since my last post about going to Electric Forest. A trip made possible by the extra funds I made blogging the months prior. I promised a follow up recap post upon my return, luckily I didnt add any kind of deadline for it. After reading the latest post from Dan I became motivated to write this post. 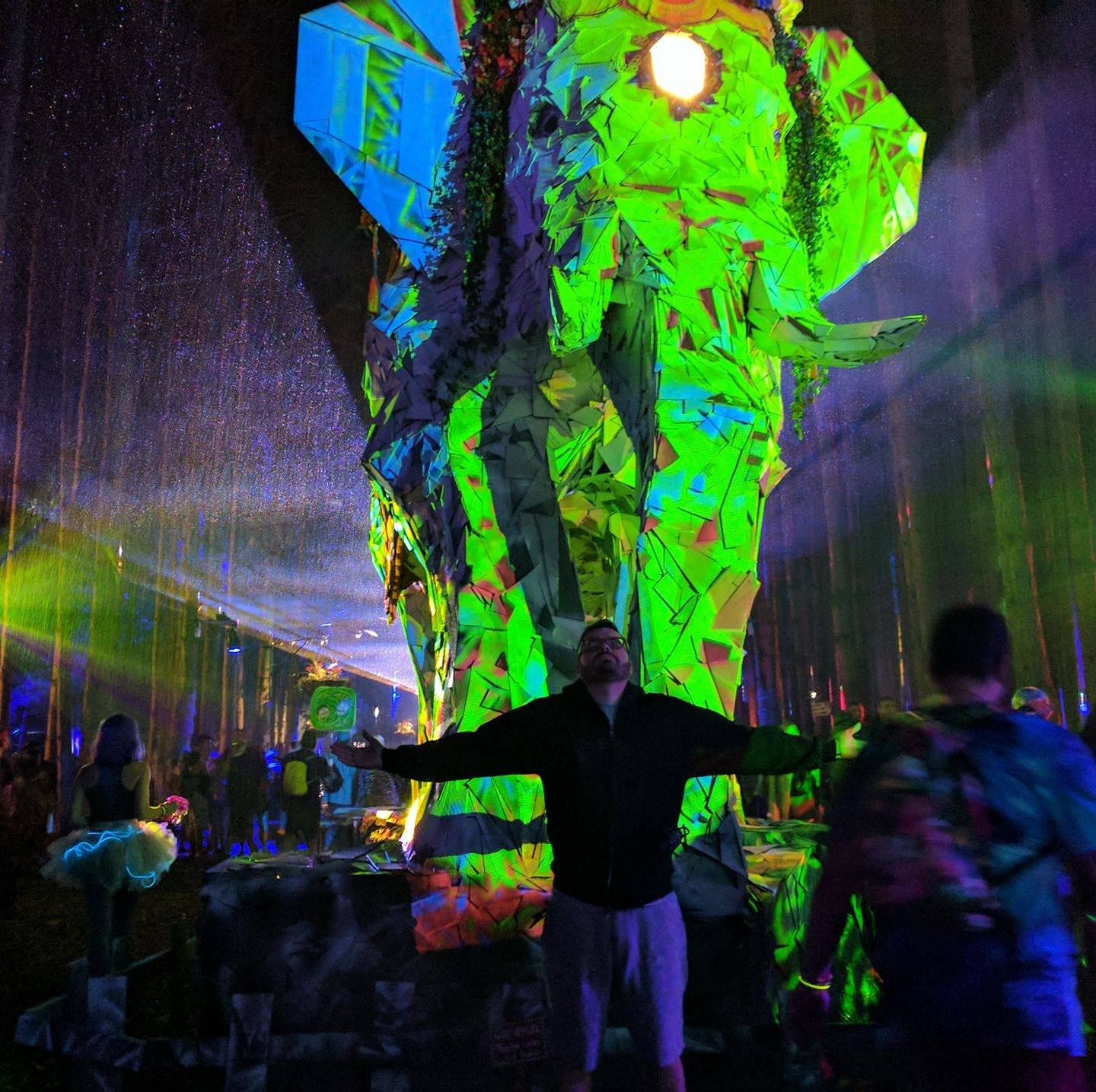 Reading my post from half of a year ago really gives credit to how powerful writing and documentation can be and I instantly could recall the head space I was in. Leave it to the forest to be life changing and give you a fresh set of eyes on your current situations. It is a place of testament as to how with imagination and determination literal dreams can become reality.

Spoke with the gentleman from Twelve Limbs Art Studio that is responsible for the above creation he built for the forest. During that conversation it seemed as though he was as equally amazed or more so of his own creation than I was. I recognized that feeling and have had it before with some of my own works.

Amazing feats are not sole accomplishments, even in the most basic sense you need a witness. I have big plans for next year, some of which even bigger than a giant elephant with projection mapping and lasers. These plans wont be accomplished alone so all are welcome to accompany me.

I have been a part of this blockchain experiment since early 2014 and knew right away it would have a huge impact on society. Since then I have been patiently waiting for a viable business class solution. I thought it may have existed with Ethereum and have been a part of that network since the whitepaper. After using and developing with Ethereum since its creation it has become obvious to me that it is no where near ready to be a viable solution for any application I could build.

I have done some testing on EOS and am familiar with the DPOS protocol form using Steemit and Bitshares. For the first time I feel like a business class solution for blockchain initiation is just on the horizon. I will be there with the knowledge and tools to help implement these solutions.

I feel the blockchain entry for most brick and mortar businesses will be in the form of customer rewards. The current solution now comes with a host of issues. For starters it is very expensive and complex to integrate the current point of sale systems into a customer rewards program. Second, when you do find a solution, whichever company you go with then has you held captive by controlling the transaction and balance information. The last issue is with exchange of rewards between companies. Blockchain technology can solve all three of these issues simultaneously.

EOS.io is the first platform I have done testing on that can accomplish this task with ease. There are many groups working on blockchain customer rewards but none that I know of using EOS. Going to make it a personal goal to either support or create this initiative in 2018.

With the current government regulation considering crypto currencies to be virtual real-estate is makes sense to be that tying it to actual real-estate is a beneficial process. So with a base token being sold for the base value of the land itself it would be in the investors interest to increase the value of the property by adding value with the creation of buildings ect. In that process the value of the initial tokens would be increased and a sub token could be used and traded at the property itself. For example in an Airbnb type scenario a "house-B-token" would be purchased for a nights stay creating buy pressure for initial investor "house-A-token". This could be replication for any property scenario.

Referring back to Dan's post and the advantages of being public and open about your successes and failures I love the idea. Those who do not are most likely trying to deceive you. From life experience I tend to be a very honest and open person learning early on that deception does not get one very far in life and a house of cards will always come falling down.

This ideology makes sense to me and is most likely the reason I was attracted to and promote the steemit platform. We can learn a lot about ourselves and others by opening up a window into our lives and ideas. One can either learn what to do or what not to do, in both cases the information is valuable. My 2018 roadmap is now public and forever ever in the blockchain, we will now see how little or how much I get accomplished next year. Your support will have a huge impact in that outcome and I look forward to challenging you as much as you do me to make next year the best possible. Nice post Cody, I should read up more on EOS, seems like it could be very big and I've only heard about it from word of mouth. Interesting stuff on customer rewards and real estate, I'm wondering how blockchain is going to change things, and how quickly that change will come.

Looking forward to see what you come up with in your work, keep the content coming!

Thank you for the kind words, but yes, very interesting software.

The world is ours to design how we see fit, 10 years from now it may be unrecognizable.

Haha, awesome, I'd be interested to hear more about what you're working on or interested in with regards to blockchain. I've been tiptoeing around researching blockchain and cryptocurrency in general until recently, I've got some catching up to do.

There really is no catching up as the space is moving at light speed.

It is, thank you.