This article is Part 5 in a series called Does Unschooling Have Natural Limits?

On any given day, there are plenty of opportunities to connect with your child in a mutually respectful way, and clear, two-way communication is key.

As renowned researchers Adele Faber and Elaine Mazlish first learned in the 1970's, you have to speak to your child as you would like to be spoken to. 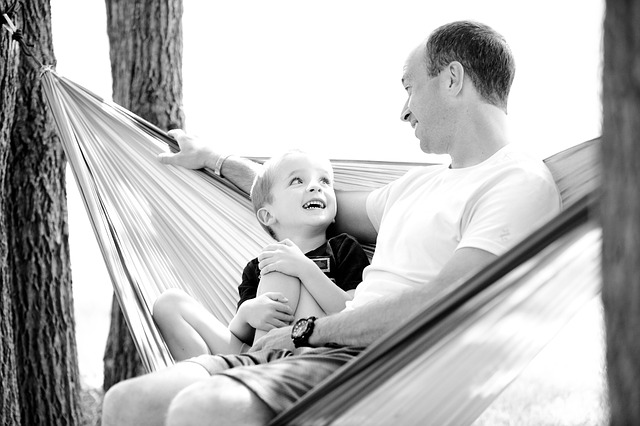 Empathy starts in infancy. If we treat our children like objects, we shouldn't be surprised when they reciprocate!

Direct, respectful communication goes a long way in soothing a child's feelings--and when the emotional aspect of a situation is addressed, children (like all people) are much more responsive and oriented toward solutions.

For example, when you've got children under the age of five, tantrums in public are just part of life.

However, when your child is crying and making a scene, your knee-jerk response is likely to try and "fix the problem", to escape the stares of onlookers, and just get on with your errands already.

However, this approach does nothing to help your child learn to cope with her emotions in a functional way.
Shutting her up with threats, time-outs, or spanking, is the most basic and useless strategy when it comes to the long view.

When my kids were little and I could see a meltdown about to occur, I would stop what we were doing, get down on their level, and acknowledge their feelings. (Yes, it's inconvenient and it takes time. Nobody said parenting was supposed to be convenient.)

"I see you're very sad" (or angry, frustrated, etc--try to name their feelings correctly!).

I would NOT try to stop him from crying, and I would never say things like, "It's no big deal! You're okay!" I would allow him the space to be angry, cry, and feel sad.

Because if your kid's on the brink of tears and you insist that they're "fine"--what does "fine" even mean?
Feelings don't just go away if they're not acknowledged--they get pushed down to fester...and turn volatile over time.

So, back to the tantrum in public. What if your child ends up screaming, hitting, or running away--?
How do you handle your child’s strongest emotions in a practical yet compassionate way?
Many of us who were raised by authoritarian parents were not encouraged to use their own voice very much as a child.

This becomes a problem when we try to have a mutually respectful, cooperative relationship with our children, because a huge part of giving and receiving respect depends on being able to clearly communicate our own feelings and needs to others.

Once the tantrum-storm passes, I have found that it's helpful (and truthful) to say something to my child like,

“Hey sweetie, you know...when you were screaming at me earlier, it made me feel really sad. I don’t like to be treated like that.”

Now, my intent here is not to manipulate or shame my child into more “compliant” behavior--but to give them useful, clear information about how their actions affect those around them, including me.

I assume the best of my kids— that, given clear information, they'll generally make kind and loving choices when they are capable of doing so.

That might not be developmentally possible for them when they're two years old and in the middle of a tantrum, but eventually, they'll grow into their emotions.

Of course, some kids are more sensitive than others. For example, I used to have to reassure my toddler if he stepped on my toes, because he felt so bad for hurting me!

True to her developmental stage, my 10 year old daughter doesn't always realize it when she say something that's hurt someone's feelings.

However, she usually appreciates me pointing it out--so long as I do so very gently and privately.

Similarly, if I say something that she finds unkind or upsetting, she lets me know about it in the same manner: gently and privately. She recognizes that I'm a person, like her, and that I'm capable of making mistakes or having bad days.

She also trusts that when she comes to talk to me, that I won't react with defensiveness or anger.

I believe this is at least partially because we all try to clearly communicate our authentic feelings to each other.

I don't hide it from my kids when I'm happy, so why should I pretend that I never cry or get mad?

Somewhere along the line, it seems that many of us adopted the (mostly unconscious) belief that sharing our feelings with our children about anything, for any reason, will damage them.

I encourage parents everywhere to start challenging that belief and instead, begin to discuss our feelings and emotions more candidly within our families.

Increased emotional intelligence is a wonderful side-product of such discussions--and that's something that's not possible to teach in schools.

Practicing empathy is foundational for raising respectful kids that are willing and able to cooperate, instead of treating their parents like adversaries.

This article is part 5 of a series…subscribe to read the next installment! The way children are treated when little really goes a long way in moulding the person they will become in future.
Psychology is a tricky thing and a lot of people still don't know that the littlest of encounters and events that happens in a person's childhood goes a long way in affecting who they are.

I just concluded a psychiatry in school where we learnt that 70% of people who come down with mental disorders in life had a factor triggering it in childhood. It goes way beyond empathy.

As a grandmother now I couldn’t agree more with you. But I must admit I didn’t use this approach as a Mom. If more parents adopt this style the future has hope. If not I’m afraid we are in for some trouble. Great post. Definitely checking out the other 4.

Awesome posts My friends and your posts are always good If you like my posts, then follow my ID

I just wish most parents will see this.

Everything is basically give and take, what you put in kids is what you'll get out.

Thanks guys! I'm working on getting the full 7 parts of this essay up and published! If unschooling is your jam, I'll be posting more about the day to day of it all on my personal account.

I was a personal blogger back in the proto-internet days, before chat rooms really caught on. Now I write for the @homestead-guru and on my own sites, but I am getting back into the personal blogging here on Steemit--! :D

Congratulations @homestead-guru, this post is the second most rewarded post (based on pending payouts) in the last 12 hours written by a Dust account holder (accounts that hold between 0 and 0.01 Mega Vests). The total number of posts by Dust account holders during this period was 9727 and the total pending payments to posts in this category was $2023.65. To see the full list of highest paid posts across all accounts categories, click here.