Marsden Rock and Marsden Bay is a Smugglers haunt Marsden Rock and Marsden Bay is a Smugglers haunt two miles south of South Shields in the North of England. Among ancient cliffs 250 million years old nest tens of thousands of Gulls, Cormorants, Kittiwakes and Fulmars.
For hundreds of years the caves in the rocks were the haunt of smugglers.
One of the caves has been turned into Europe's only restaurant and bar inside a cliff. The Marsden Grotto. AND IT IS HAUNTED!
Jack the Jibber is said to haunt the cave, suspected of speaking to law officers, he was hung from the cave ceiling in a cage and left to starve to death, whilst his smuggler made merry and got drunk below him.
His ghost is said to haunt the cave .
My uncle worked at the restaurant, and until 1999, a glass of beer was left outside the restaurant every night for the ghost. He say is was gone in the morning.
One local DJ drank from the mug. They say the number of paranormal exoeriences increased dramatically.
Here is a video I shot of the bay, I have dedicated it to my late wife.
One day we will dance again 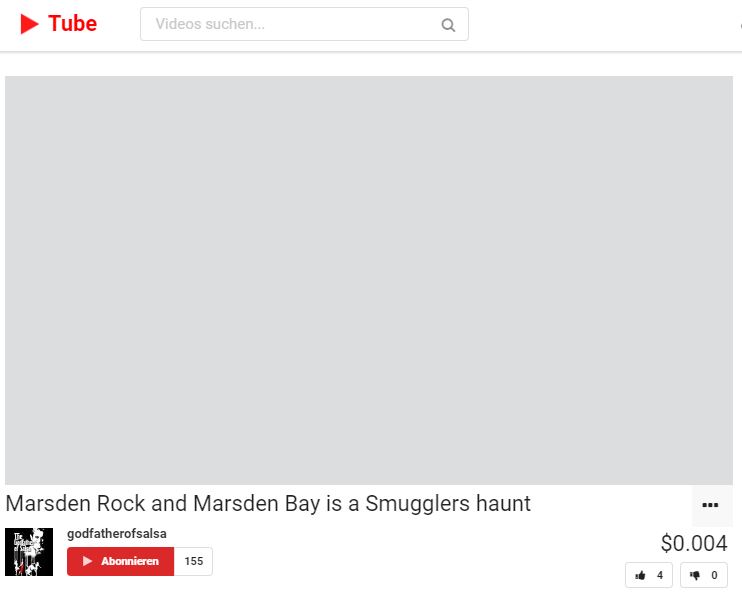 Oh no, dont tell me again its not working... this is crazy...works fine on the computer...

It NEVER works - and I'm not the only one. Friend, I tried to give you some advice, but if you don't want it just say so.

I did take your advice... did a test run... worked ok on my computer, but in future i will use youtube or vimeo link... thanks

Kudos on the video. Very nice atmosphere. Love the music. Thank you.

Thank you... glad we got there in the end... have upvoted you for yourn patience

My "patience" doesn't matter, neither does my opinion. I was hoping to help you get on as I really like your content. It's a shame to see interesting stuff go to waste on account of technology that isn't ready for primetime yet.

I love the idea behind DTube and it might have a bright future, if not too many people get peed off for having their time wasted. Not being under a corporate thumb is appealing.

Same goes for BitChute (peer-to-peer). I experimented with it again today, because I was trying to get a quick sample for another Steemian (check him out: @vitalmistake) on-line.

It works better than DTube; at least the upload is flawless. Playing the videos has hickups, however, but at least they start. Also not quite ready for primetime, but further along than DTube. See for yourself:

Since we put work into our videos, we want people to enjoy and appreciate them. So, for the time being, I feel we are left with the corporate sites. That's all I tried to say. Sorry if I came across too pushy. :-(

Not at all..to tell the truth I joined this site less than a week ago, and still struggle to work out how it actually ticks, how best to use it...if you like...have a look at my youtube channel...https://www.youtube.com/channel/UC55d_khR2Dfzzlf5OAzDOVQ?view_as=subscriber

I'll study your YT channel a bit later (looks interesting). One question: Doesn't YouTube give you a hard time with the music? It's the reason I could never warm up to it. I use royalty free stuff (SonicFire et al) which I paid a ton of money for and YouTube kept nagging me, how I "can't monetize", "composer will monetize", "not allowed in your country", etc., etc. It was so bad, I deleted my account and quit publishing videos altogether. (Vimeo was no alternative at the time.)

In addition, they seem to censor political videos quite heavily, similar to Facebook. It's how I came to Steemit in the first place; free speech and all that.

What is your experience with this issue on YouTube?

Yr right about the music thing...I often get away with it my mixing it with wave noises...or in the case of dance festivals... mixing in crowd noises to mask it... but sometimes they still detect it... months later, and you get a warning notice.
Bloody stupid when you are at an outdoor concert and people are dancing to music...thats why I looked at Dtube...but it has a long way to go for delivery

Youtube is a nightmare...for years I got away with 'masking' music by overlaying it with crowd white noise, or wave sounds. Now even a 50/50 split I get a warning notice...Particularly annoying when at say a dance festival and I vid some one dancing to a track, despite a live performance..poor sound and crowd chatter youtube still sends a warning notice. Even so called royalty free stuff is sometimes flagged up. Found facebook particularly annoying...for example a friend send a meme showing the London Mayor and a convicted m uslim terrorist are cousins has been blocked, despite a google search showing the UK Daily Express carried the story a year ago

Repeat after me: V-I-M-E-O. No problems so far. DTube is slowly coming along, like a light at the end of the tunnel. However, in addition to the still existing technical problems, DTube takes a portion of your proceeds, so it's not free.

this is original work @OriginalWorks

The @OriginalWorks bot has determined this post by @godfatherofsalsa to be original material and upvoted(1.5%) it!

Thank you first time I have tried this