Don't take this as an attack, but how did you grow your audience Tracy? Mostly thru Qanon right? When exactly did you know it was a LARP? Why didn't you tell your followers the truth? You were contacted by the same people that contacted Defango, so you knew.
There is something to be said about truth and honesty. I stopped reading your book when you said others only wanted to hear your side on their channels to get subs. That is really sad.
Here on Steemit, we help each other grow.
How many times have you up voted others on this platform???
How many are you following? Zero right?

To be fair, she hardly posts on steemit. I didn't even realize she was here...

Im not sure. Maybe bc she knows those she blocked on twitter are here? Or rather than a video she wanted to make a long post...

Great point to bring up...
If "Truthers" were interested in Truth first, they would be here on a platform that isn't gamed by algorithmic Psy-Ops...

But people don't know how this network works, they're too timid to learn and all the other centralized and gamed platforms like YouTube and Twitter give them blinky lights and shiny emoticons, adding to their dopamine rush. It's a tough market to crack.

Well Frank, she probably didn't realize that she can not delete the things she does not like on here. That is going to be a tough one for her. If you question her she blocks you. Disagree, she deletes the comments. Then she preaches transparency. I know you are standing up for her because of Frank, but you really need to see what is actually going on with her before you stick your neck out too far.
I've been on YouTube for a very long time and I have never seen an account go from 900 subs to 90,000 in a matter of months. Nor have I seen anyone get nearly 900 Patreon supporters in that little bit of time. Especially someone who posts on a whim.
I would love to see that kind of support for the QuiteFrankly Podcast because Frank does a damn good show everyday, 5 days a week.
When I found out she "Tracy" had a researcher working with her who wanted to remain anonymous and has turned on her, I can understand why. Just because you don't want your name put out there does not mean you do not want credit for doing the work. Tracy has taken 100% credit for and had claimed to do all the research herself.
Something is not right and she is still running away from legit questions.
Damn, I was still waiting for her to out Goodman, which she never did. She jumps on and off band wagons and then drops things, we will get 1/2 of a report and I guess maybe she gets bored and drops the subject.
And as you know, one can not make it on Steemit without being involved. She has not ever up voted comments and she is not following anyone else. You have to make an effort

Thanks for the perspective @four20!
I very much appreciate your response. I too was disappointed that @tracybeanz didn't go after @csthetruth more. That Goodman fellow might be getting paid through Corsi's channels as well. I personally don't have a problem with what @tracybeanz does or does not do.

For example, I really think that the researcher who is bent out of shape is a NOTHING BURGER.
I think people growing YouTube channels based on what's News is EXACTLY what should be happening.
I think anyone who understands psychology and social engineering is watching a Huge Situational comedy unfold. But most importantly, I have never been personally harmed in any way by just PAYING ATTENTION.

So now that we're in an Attention Ecosophy, all I care about is bringing the conversation HERE first instead of going along with GAMED and CONTROLLED networks like Twitter, Youtube and FaceBook. Since there appears to be a very strange part to human Nature, which CRAVES ATTENTION. 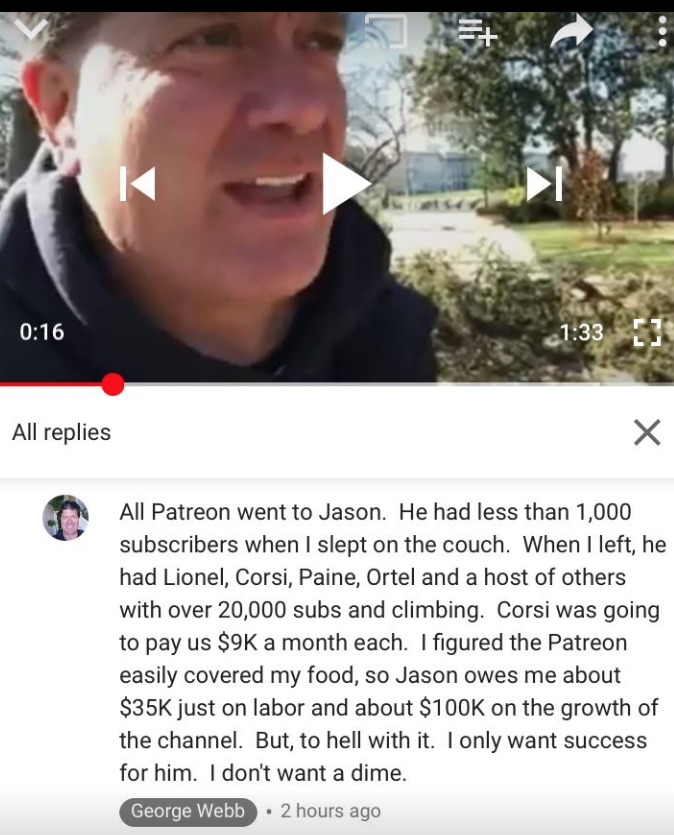 Thank you Frank, I have much respect for you. I guess I have a bit of a grudge because I actually thought of her as a friend and we would PM often. I questioned her on something and bam blocked. Critical thinkers are accepting of differing opinions to help balance a broader perspective. A true journalist can not be ruled by feelings and must present all sides even if it goes against their beliefs.
We don't need cheerleaders for the president, we need the truth. I support our president and want him to be successful and I want back the America I knew when I was young. I want it to be safe for kids and I want the demonic scum put back where it belongs.
Going along with something that is known as false destroys credibility in my book.

? 😮 wow, he flagged you (or chudel?)? Well, social engineering by use of trolling is pretty evil....
However,
Social engineering through use of flagging with money and reputation attached is also evil...

so you can read it. Why is everyone a fucking bitch? She is under attack .. by assholes .. what the fuck else is she supposed to do?

Tell the truth.
The part where she said she was still "green"?
We all know who Q is now. When did she know?
When they bought her the new computer?
Did she meet with "Pam" and Corsi in DC, at her "transparency March"?
The truth is what matters

Just because someone contacts you and tells you Q is a larp does not mean that you know Q is a LARP , or that you believe what they are telling you . Just because someone says Q is a LARP or even tries to prove it does not mean that Q is a LARP. Many people have been saying that . I still don't believe it. Q has proven himself/themselves to me many times over . I have been directed to many great avenues of research. I have not seen any disinfo or misdirection. I believe Q is the real deal.

im confused. did tracey say Q was a LARP? i thought she stated above she never did that?

ummmm actually i only started following her when I saw she was doing some legal investigation on Seth Rich. I imagine many ppl came to her for that type of journalsm. I can't use these other platforms unless I'm on my computer which sucks. I watch all my stuff from a television so stuck with YouTube until there are decent apps for firestick And why do you have issue with this anyway? You can't blog on YouTube. She shouldn't have even responded. It's ridiculous the petty things you guys say to her. Why use steemit? really? you couldn't come up with a more relevant question?