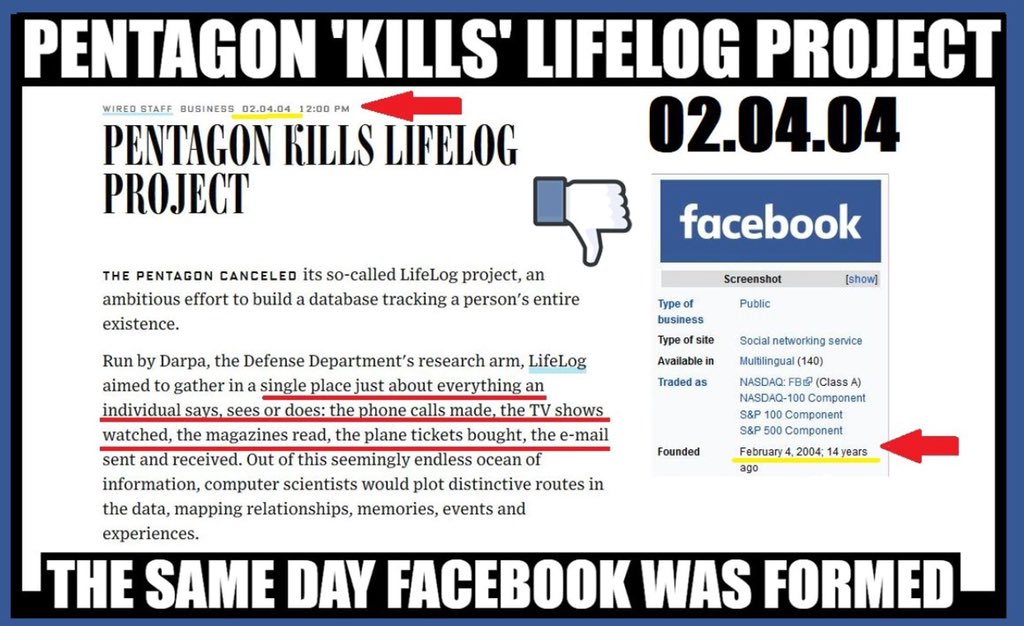 I think that most of us knows how intrusive Facebook has become especially after the information that has come out over the past several weeks. What I didn't know was that the idea for Facebook may have been originally been derived from the DARPA Lifelog project.

And by DARPA I mean the Defense Advanced Research Projects Agency which is an agency of the United States Department of Defense responsible for the development of emerging technologies for use by the military.

Not only is that creepy, but the date of the Lifelog project being shelved is same date that Facebook was "born": February 4th, 2004

My question is: why pay for data mining of personal information through a military project when you can open a social networking app where the users give their information for "FREE".

I don't know about you but I wouldn't pay for information when people would just give it to me through my app.

Also, the other two members of Facebook's Board of Directors in addition to Zuckerberg (Peter Thiel and James Beyer) have ties to datamining and DARPA as well.

Does this mean that Facebook is just one huge global psych op disguised as a social media site? Other than making masses of money off their users by providing data to advertisers, what did they hope to gain from a military standpoint?

These are questions that will need further research. 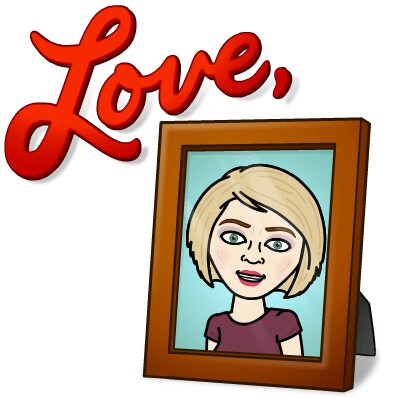 There shouldn't be any doubt that facebook is a military project posing as a civilian one. That Mark Cuckerberg is but a stooge ! And I don't think crypto and Steemit is any different either, but only time will tell. I got notified by other users that they are unable to upvote my posts and comments, so it seems there's some type of an acceptable trend, the authorities are trying to make us conform with. Basically keep your head low, talk about useless 'goyim' stuff and keep obsessed with games, memes and pornography, philosophy. NOT THAT IMPRESSIVE !!!

There are many differences between Facebook and Steemit. I should write an article explaining what I mean by that. Steemit is a response to Facebook. Steem seeks after transparency, free market competition in what Facebook was turning into a monopoly, a tech cartel tyranny, etc.

That is a strange coincidence. There have been rumors that facebook is part of darpa or the CIA for years and I tend to believe that there is at least some truth to them.

Another reason to stay away from facebook is Zuckerbergs face. He looks like king of the lizard people... Would you really trust this guy if you met him in real life? I hadn't seen this picture yet. The below one is what freaks me out. Thanks for the UV btw....😊 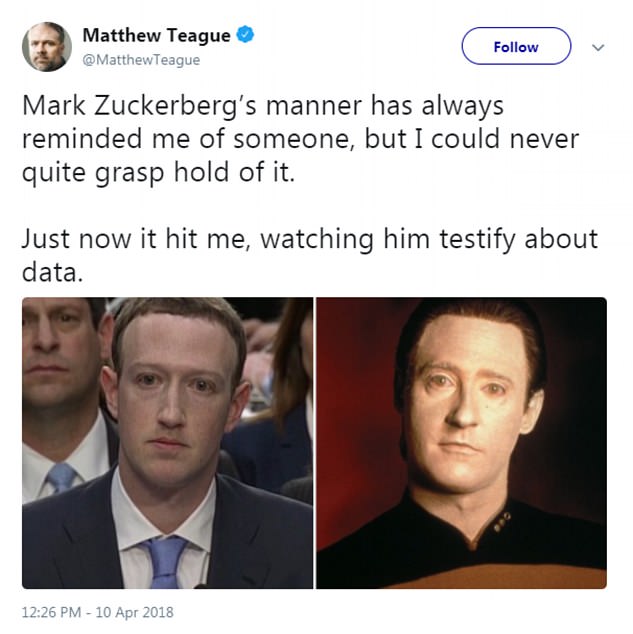 Haha it is a spitting image. I didn't watch much of that testimony, just what was on the news but he was so awkward and robotic....

Mark was trying to say that Facebook is a platform and a publisher. Now, that violates liability protection, Safe Harbor Law, etc. So, Mark should be in jail for what he said. They should be going after Facebook, etc.

I love me some Data.

Wow, that's quite convincing. I recently did my first Steemit article on equity release. It's a great platform and I'm enjoying the diversity of content.