The autopsy on Andrew Getty, performed on April 2, 2015, included a toxicology report showing that methamphetamine and prescription drugs were present in Getty's blood at the time of his death and that duodenal ulcers could have caused gastrointestinal bleeding. Drug paraphernalia were also found in the home. However, the issue of "severe blunt trauma to the rectum" has yet to be explained or properly investigated by authorities.
https://www.newsmax.com/TheWire/andrew-getty-autopsy-result-ulcer-related/2015/06/17/id/650955/

Andrew Getty was not the first grandson of J. Paul Getty to die in middle age under odd, drug-related circumstances. The family appears to be unusually plagued by decadent living, tragedy and drug addiction resulting in death, including the suicide of J Paul Getty's oldest son, J Paul II. You can read a comprehensive article by Forbes Magazine on the history of the Getty family and their fortune, made largely in Saudi Arabia and Kuwait by J Paul Getty Sr., here:
https://www.forbes.com/sites/afontevecchia/2015/04/23/the-getty-family-a-cautionary-tale-of-oil-adultery-and-death/#55e5b9367eee
Additionally, Gordon Getty, Andrew's father, kept a second family, which was an "open-secret" in Hollywood circles. http://www.latimes.com/local/california/la-me-2nd-getty-family-an-open-secret-20150331-story.html

Andrew's cousin, J. Paul Getty III, was kidnapped in Italy in 1973 and the kidnappers cut off the 16-year-old's ear after J. Paul Getty Sr. refused to pay the ransom. Getty Sr. eventually paid a ransom of approximately 3 million dollars. Once released by the kidnappers, Getty Jr. cut off all contact with J. Paul Sr. and his own father and led a reckless life of drug addiction and fast living until experiencing a debilitating stroke in his 20s. He died in 2011 at age 54. In addition, Getty Jr.'s stepmother, actress Talitha Pol, died of a heroin overdose in 1971.

Sir John Paul Getty, (born Eugene Paul Getty; September 7, 1932 – April 17, 2003), the elder son of Jean Paul Getty Sr. (1892–1976), was responsible for developing and completing the Getty Center Museum fortress. In 1986, he was awarded an honorary knighthood by Queen Elizabeth for loyalty and "services" to the Crown (to the tune of 200 million dollars) and for his support of the Conservative Party. His honorary knighthood became true knighthood when he became a British citizen in 1997. Interestingly, The Getty Center, the big sister campus to the Malibu Villa, of the Getty Museum, which cost $1.3 billion to build, opened to the public on December 16, 1997. In 1998 Eugene changed his name to Sir Paul Getty.

An ex-CIA operative, Steven D Kelley, claims that the knighting of Sir Paul Getty was payment for services rendered in building the Getty Center Museum complex and the massive deep underground facilities beneath the Center. This man purports that the Getty Museum is situated over a vast tunnel network and massive underground facility designed to house the British Royal Family in the event they should need to go into hiding. The operative also claims that there are thousands of children being bred and held captive under the Getty Fortress and used in breeding programs, satanic ritual abuse and then harvested as food, adrenalized blood elixirs and bone marrow stem cell crops. Please see the bottom of this article to sign a petition, organized by Kelley, to request that the United States Marines raid the Getty and free these captive children.

Here is the Getty Center in Brentwood, California:

AMTV's Chris Green interviews ex-CIA operative, Steven D Kelley, who is currently working to compel the FBI to raid the underground base beneath the Getty Museum:

Last week, the Getty Museum was engulfed in a raging wildfire, making it inaccessible, while hundreds of homes in Bel Air were burning and thousands of people were forced to evacuate. The scene was apocalyptic, with people recording the blaze with their cell phones, depicting scenes reminiscent of Dante's INFERNO. Who started these fires? Why? Are they the result of directed energy weapons? If so, what are they attempting to destroy or cover up? Is there a major deep state or white hat operation going down behind the "smoke screen" of this "inferno'?

Yesterday, SGT Report published an excellent video connecting the Getty to the elite pedophile rings in Hollywood and the current exposure these rings are getting. Is the deep state planning to "sacrifice" the Getty Museum and underground base, with its massive holding of irreplaceable art and artifacts and the alleged thousands of children held captive beneath it, in order to cover up the mass child trafficking operation going on within this possible satanic stronghold:

Ironically, a Sony blockbuster film, All The Money In The World, starring Kevin Spacey and depicting the story of J. Paul Getty Sr.'s refusal to pay for his grandson's ransom, was due for release on December 22, 2017.

Then Kevin Spacey was accused by multiple men of molestation, rape and sexual harassment, the most recent accusation coming out only two weeks ago. Spacey's Netflix series, House of Cards, was cancelled as a result and he will no longer receive the Emmy award that he was supposed to be presented with in January of 2018. Spacey has been linked to billionaire Jeffrey Epstein's Lolita Express pedophile ring, taking multiple flights with Bill Clinton to Epstein's Caribbean pedo-island, where the elite engage in sex with minors and children who are trafficked to the island.
http://www.realclearlife.com/movies/allegations-sexual-harassment-kevin-spacey-surface/
http://www.thesleuthjournal.com/kevin-spacey-lolita-express-bill-clinton/

Ridley Scott, the award winning director, refused to scrap the film and is re-shooting all of Spacey's scenes, this time with J Paul Getty played by veteran actor, Christopher Plummer.

Why is the film All The Money In The World being made to be released for Christmas, 2017? What is happening underground at the Getty Museum in Brentwood, California, while LA burns? Are we about to be indoctrinated with J Paul Getty's tragic yet sentimentalized life story spun by the CIA-run Hollywood machine in order to hide a much more serious and sinister reality-- the global elite child trafficking and harvesting industry and the breakaway civilization's literal feeding on the flesh and blood and sexualized terror of human children? What about the British Crown and Getty family's involvement in it? Just as the sacrifice of Harvey Weinstein was an attempt to take the focus off of Pizzagate, the film All The Money In The World is meant to implant our minds with a programmed message from the deep state elite.

What do you think that message is?

"For where the instrument of intelligence is added to brute power and evil will, mankind is powerless in its own defense." -Dante Alighieri, from INFERNO, Part One of THE DIVINE COMEDY

Humanity is no longer powerless against institutionalized evil. We are revealing the identities of those attempting to recreate hell on Earth, putting an end to the Luciferian agenda, and ending 5,000 years of magick-based mind-control.

Thank you for taking the time to view this entire post. If you believe these issues are important and that these connections need to be further explored, consider Resteeming this post.

Thanks for posting this, web-gnar! I will listen and see if I can contact Kelley. I have been interviewing RDS several times this past year and everything he said about the pedo-state and the downfall of Congress members and H'wood elite is coming to pass. Have you popped this interview up on Steem-it? There is a similar bunker in West Virginia that Ole Damsgaard has been trying to make public. One of the hundreds like it, unfortunately. Great to connect with you.

totally awesome post. Steven D Kelley shared this steemit article on facebook. He has a petition going to order the marines to go down into the getty. maybe you should add that to your post. 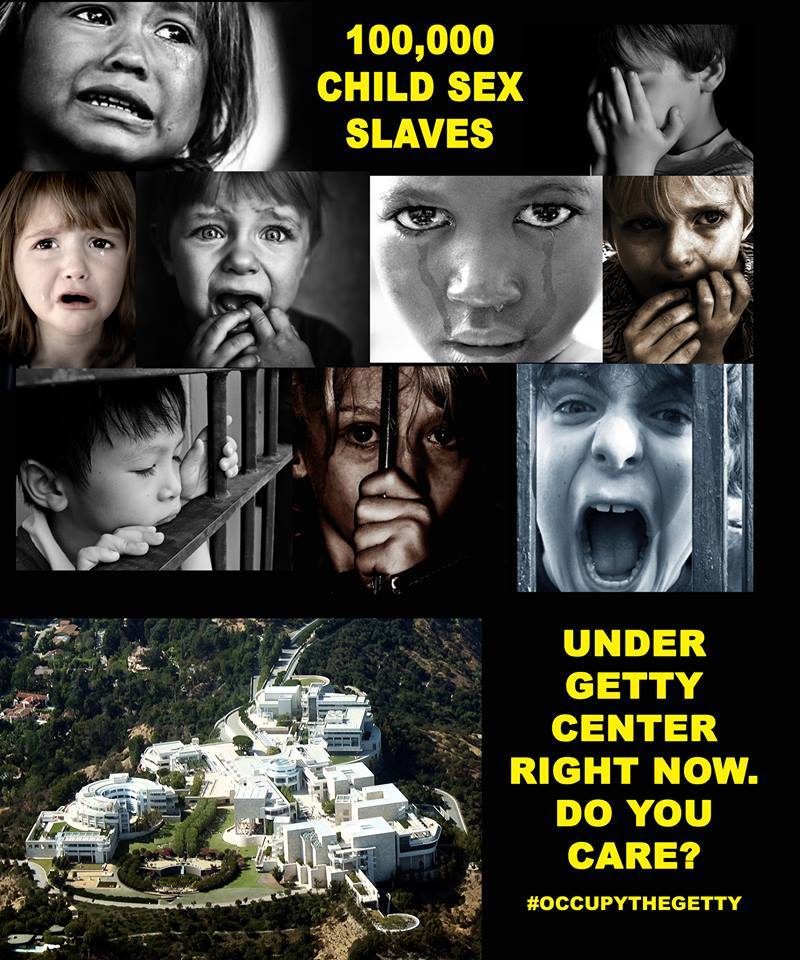 THANK YOU SO MUCH @web-gnar! I have added the petition information into the article. I am not on FB, but I am hoping to connect with Kelley for a current interview based upon the current fires surrounding the Getty and the Hollywood implosion occurring right now. I really appreciate your post-- followed you. Let's bring these scumbags down and the children UP from that hell-hole!

Um this was a great article . Im on phone right now . When i get home ill re read it and give you some of my thoughts. I was thinking the weinstine stuff was a cover up for vegas. But it seems to be deeper than that . Dante's quote is very intersting. There us a guy on here and i cant spell his name right. Verospace.. ill correct it later he has been researching this too i think. Anyways. Ill talk to you later

Hi @spacetrucker, thanks for having a look at this. Its the dots and now the web can be woven. I appreciate your insight when you have the time. I plan to look at your "series" later this evening. Talk soon!

Thanks Spacetrucker! looking forward to a new ally!

Interesting post indeed I will need to do more research on this family, the thought of this lot makes me sick, Don't dig to deep or at least come up for air sometimes.. I do believe it is not right vs left.. it is left and right vs the government. the media tells most people what to think. the majority has no concept of what the value of life and freedom is anymore. It is going to take people like you to slowly lift the vale . have a great day!

Thanks Spacetrucker. This article holds threads that could be taken and woven by many to create the real life web (not, www). For me, I don't need air from this, I get Oxygen from the light of day being shown on this festering mold feeding on humanity. Awareness is sustenance. Food is a trap. Duality. Trap. Duopoly is over. Two-party Tyranny is in cardiac arrest. thanks for the chat, friend, look forward to more. Contact me any time.

The Deep State Satanist mind control kiddie munchers , archon parasites it all ties together like a nightmare from HG well's Time machine...

Yea. Looking forward to speaking more with you about the subviving parasites. Thanks for commenting! If HG Wells was written by Kurzweil under hypnosis! All the best to you, @vaerospace! Following!

Highly rEseemed!
This is an incredible red pill article!
You really got the hang of this!

Thanks for the Resteem and high energy support, FB! Your opinion adds spark to the flame!

It is facts like this that give me cause to be grateful I was not ever wealthy.

This is a great post, and you have put a lot of work into it.

Thanks for the great comment, @valued-customer. I think it's bc most ways of making money in this crime-based economy are pretty malevolent and that's why so many wealthy people are sick in the head. I appreciate your acknowledgement of my work, thanks! Followed you!

Thank you so much for this clarification. Did you know there is a Getty influence in South Africa? http://www.perfectafrica.com/destinations/south-africa/kwa-zulu-natal/kwa-zulu-safari/phinda-getty-house/

Thanks for pointing out this connection. I will follow up on it. A friend of mine pointed out that Getty was like the George Soros of his time, using his money to promoting global fascism and the Luciferian agenda. Thanks for the comment!