The Future of Blockchain

wavesplatform (66)in #cryptocurrency • 2 years ago 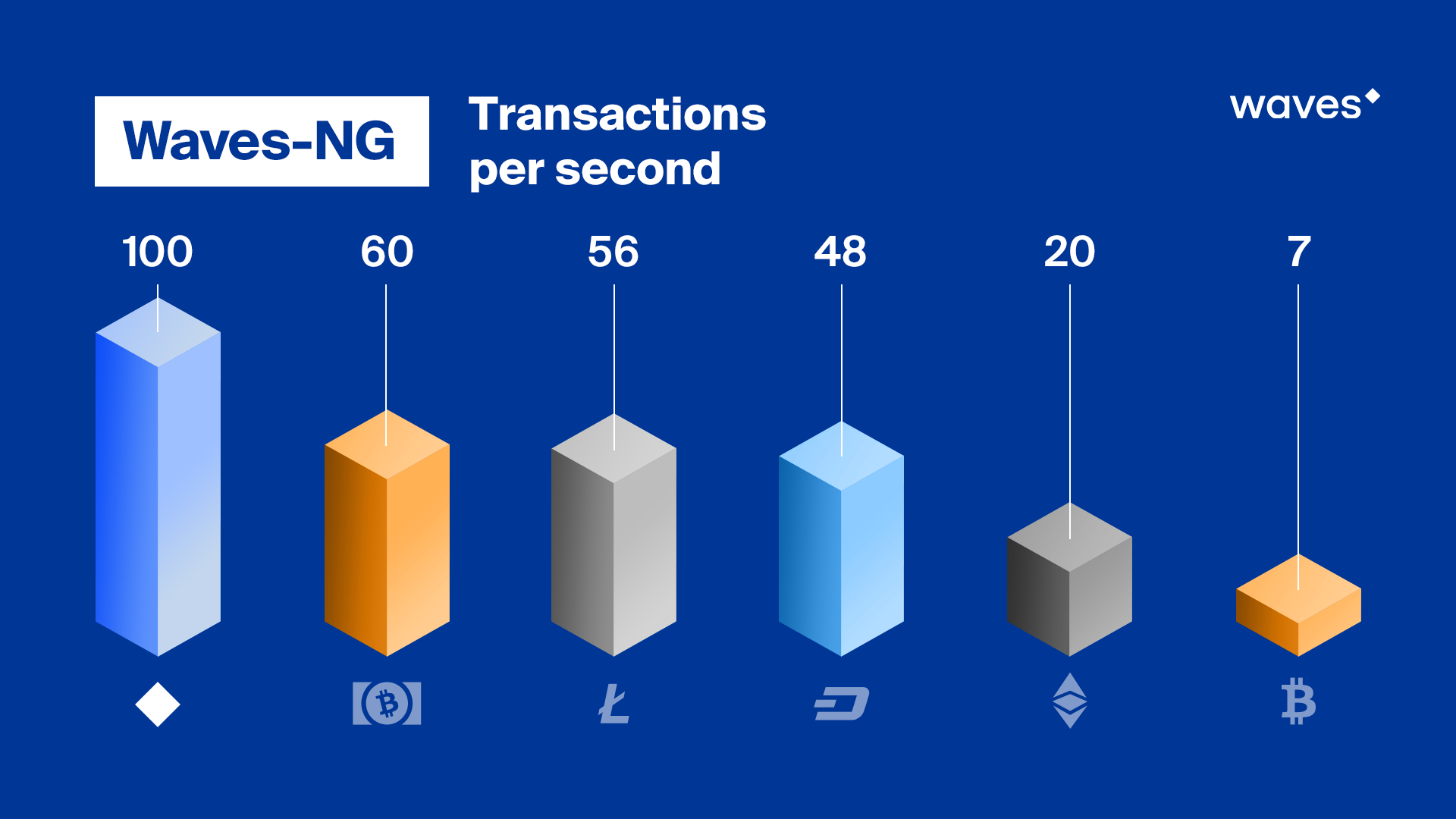 Blockchain technology is rapidly changing the world. The key word for the blockchain revolution is tokenisation. Any form of value registered to our names, whether property rights, money or even votes, is destined to be fully digitised, decentralised and tokenised, transferable and tradeable on an instant, cryptographically-secured, peer-to-peer basis.

Today we’ll talk about some relatively new aspects of blockchain development and Waves’ humble contribution to it. Most people associate blockchain with cryptocurrencies, but the technology is not restricted to money exchange alone and can be applied to almost any sphere of our lives.

How the Waves Blockchain Works

Blockchains have historically been limited by:

The Waves blockchain is fundamentally different:

The result is unbeatable speed and throughput: Waves can support up to 6,000 transactions per minute — an order of magnitude more than other major blockchains.

Over 300,000 transactions were processed by the network on the day the Waves-NG protocol was first activated. Theoretically, up to 10 million transactions per day are possible. For comparison, at the time the bitcoin network was clogged with over 200,000 pending transactions for many days. Waves is already the fastest open blockchain in the world, and we will soon raise capacity further. Waves-NG will allow anyone:

Sounds great, doesn’t it? Now let’s put aside the topic of cryptocurrencies and take a look at some further development for blockchain technology, and the role Waves is playing in it.

A deal with no middle-man or risk of a scam? Smart contracts are at your service. They cannot be altered or switched off. For example, property transactions are immediately executed in real-time when all the parties have agreed to the right conditions, or content creators automatically receive royalties every time their material is downloaded or used. 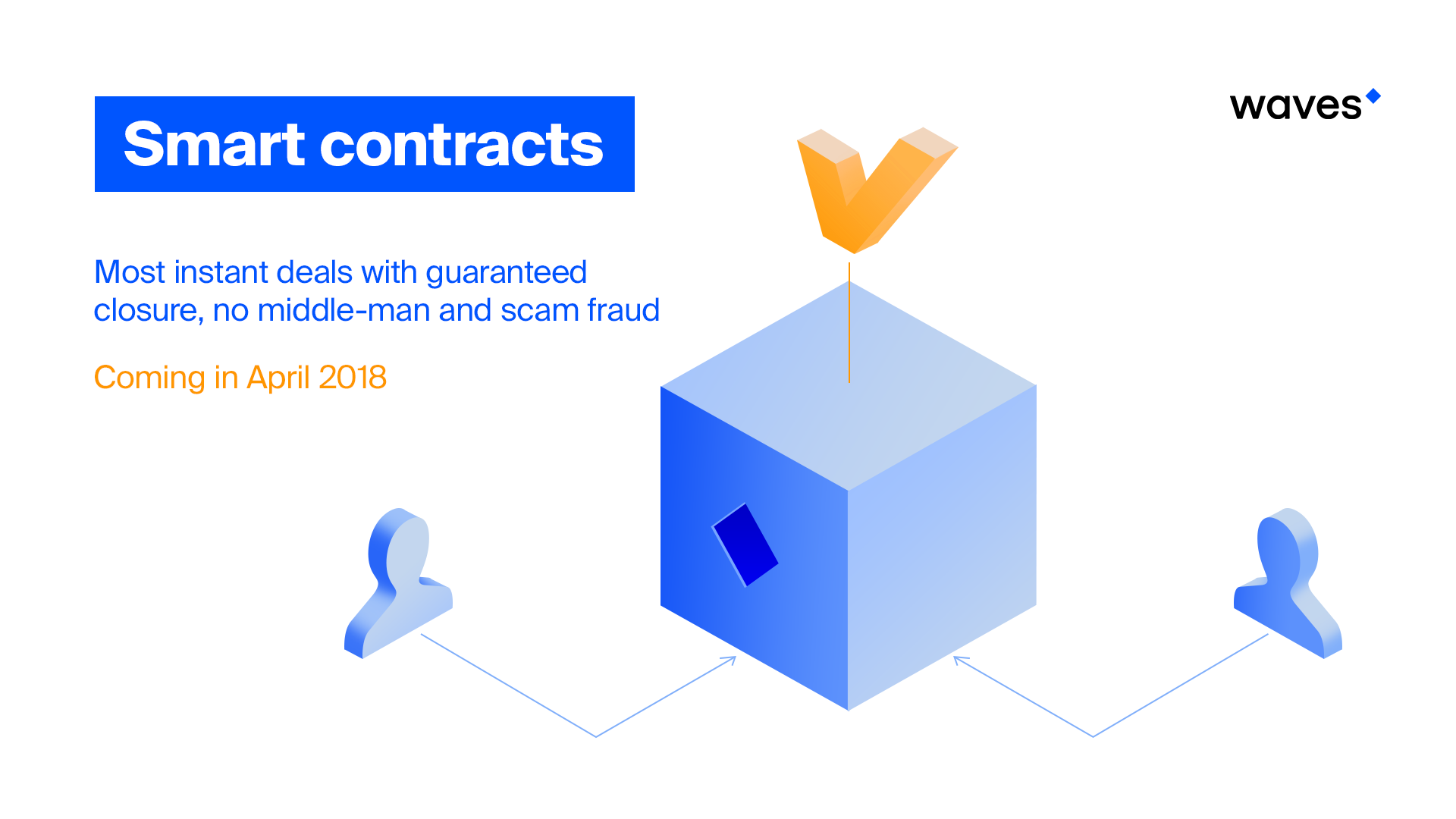 Waves’ smart contracts will initially be non-Turing Complete, whilst still providing most of the functionality that businesses will need.

Our plans for smart contracts include:

Voting on the blockchain is the most secure way to conduct a vote on a peer-to-peer basis — vastly reducing or eliminating problems of electoral fraud, keeping the voting process transparent but the anonymity of users protected. Voting can be carried out according to a range of criteria, including one vote per account, or with vote weight proportional to WAVES or token balances.

Scratch my back and I’ll scratch yours

Whilst it is relatively straightforward to exchange tokens when they are hosted on the same platform (e.g. WAVES and WCT), the challenges involved in exchanging coins across different protocols (e.g. BTC and ETH) are considerable.

Atomic swaps allow parties to exchange different cryptocurrencies trustlessly. Preparations for implementing atomic swap functionality are in development on the Waves platform, with the right research teams being sought. Integration of atomic swaps will allow ERC-20 tokens to be traded on the Waves DEX, amongst other use cases.

This year the Waves team is going to make cryptocurrencies even more safe and useful.

We are negotiating with major payment processing companies. It will soon be possible to buy goods and services with WAVES both online and in the real world, bringing the benefits of digital cash to e-commerce.

A secure yet convenient and user-friendly way to store crypto tokens. Work is currently in progress to integrate Waves with a leading provider of hardware wallets.

Waves is keeping touch with new and existing exchanges to organise listings for both WAVES and Waves tokens.

Imagine a world where swapping information, goods and different forms of value is frictionless: few mediators will be left, both in terms of individuals and institutions, bureaucratic boundaries will be minimised and exchange speeds will be unthinkably swift.

We are making that future a reality. Waves is already at the forefront of the peer-to-peer revolution. We are building the fastest, lowest-cost, most secure and user-friendly blockchain platform ever. Join us in bringing about tokenisation for everyone. Let’s change the world together!

Yesterday I attended the Waves meetup in Amsterdam and wrote a post about it: https://steemit.com/cryptocurrency/@cryptotem/yesterday-i-went-to-the-waves-meetup-in-amsterdam-these-are-my-take-aways

Let me know if you have any suggestions for improvement :-)

Big up! We hope you enjoyed it :) Thanks for spreading the word, really appreciate that!

I definitely enjoyed it. It was well organised (same for the previous new Waves Client launch btw) and I got to talk to some interesting people :-)

Keep these type of events coming!

Resteemed so the community here learns what Blockchain means, can do and what you guys can offer to anyone out there, not only crypto and blockchain enthusiasts.

heyyy
what do you think of this:
https://steemit.com/litecoin/@aro.steem/litcoin-nodes-propagation

is there any date on when waves would have their new exchange?

With the technology advancing and more organisations seeing the benefits of a shared ledger among industry partners, most of us think about future applications and Blockchain will resolve that.

With its potential to bring transparency and fairness while saving businesses money and time, the technology is transforming into a wide array of sectors.

I encourage you to check out some of the articles on our Inform site to learn more about blockchain related use cases which might interest you https://bit.ly/2JwKJ85