The Crypto Market is WEAK

wagnerxd (55)in #cryptocurrency • 3 years ago

Despite the bull run that was produced in the past week that rejuvenated a slight optimism in the market, the run seems to be running out of steem (haha get it? Ok that was bad ._.) as we have not yet broke past the 9k resistance barrier and with bullish volumes diminishing. 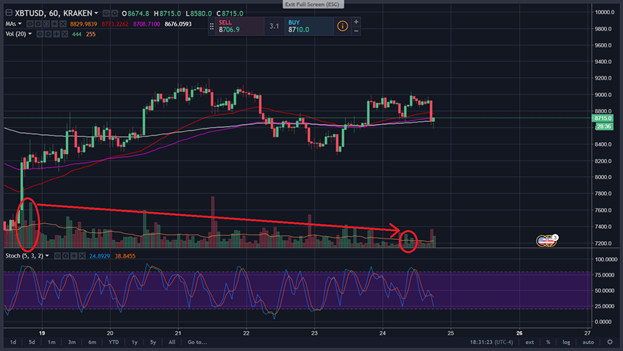 This was surprising but also not so surprising at the same time as I was personally expecting to reach at least 9.5k before a reversal trend. But as with the common theme of 2018 with bad news after bad news, the 15 year old that managed to hack the old Ledger firmware made it to the frontlines and with Japan kicking Binance out catalyzed a premature weakening. Further, considering that volumes for bullish activity has been extremely weak over these few months, the bears should be coming in anytime now to put even more downward pressure on the market.

Another point to keep in mind is the fact that currently the entire market is correlated in that it is not just bitcoin that is experiencing this selloff but every coin. Thus, not only should we be paying attention to bitcoin, we should look at some of the other major players as well. Let’s see what Ethereum’s been up to. Doesn’t look like it’s doing very hot but most importantly we are approaching a major point of resistance within the next 2 days. Giving by this downtrend, I see no reason for it to bounce back and as a result, it will probably contribute to bring the entire market down a bit with it.

So where does this all end? As stated in a previous article, the stock market has been going through some rough patches itself with the most recent trade feud with China brewing the storm even further. 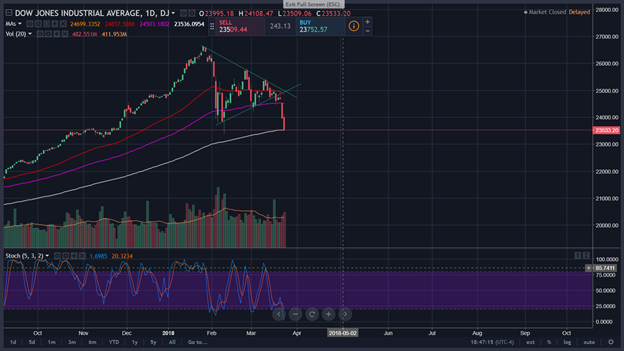 We have broken past the previous resistance as predicted before and once we break through the 200 MA we can officially say that we are in bearish territory. Thus, I expect if any more bulls were to come in, it would be within the next 1-2 weeks.

Cryptocurrency is extremely volatile....very difficult to predict what the future will hold....there's been a lot of recent bitcoin developments so hopefully things will begin to normalise....

It is very difficult to know exactly what twists and turns just like any market, however, the evaluation that I produced is in my opinion at least more than your average cause due to variance. In any case, it is very possible to predict certain events of the future. In fact, we have been experiencing a downward trend for the past few months - i.e. we have not seen random fluctuations in price.

We do have developments coming in but one has to keep in mind that objectivity is not the motivation for behavior for this market, emotions and perception is.

Really great insight, I agree, the cryptocurrency market has definitely been experiencing a downtrend.... with all downtrends, price should find a level of support at some point in time...maybe the trend will change at some point in the future.... Your analysis seems very detailed, maybe you'll be able to identify the possible turn in sentiment.... will be interesting to see how things turn out in 6-12 months time....

solid point, there's a good chance we turn things around shortly, a few dips incoming but after that I hope we finally resume that uptrend of so long ago!

Yeah, good point, let's hope the prices find support and trend upward in the future.... cryptocurrencies is the future of money....everything is going digital.... we just need to be patient and ride out the waves until the good times come again....

You got a 2.06% upvote from @postpromoter courtesy of @wagnerxd!

when ya think about increased The market often gets bored before the biggest moves. Smart money accumulates without creating big waves, opting to lull the market to "sleep".

Not too sure what you mean by smart money. Can you explain?

For future viewers: price of bitcoin at the moment of posting is 8624.17USD

There is no economist who could predict the value of something in next hours, days, months.. But if you look closely at bitcoin chart you can notice that the price has always been rising (for the amount of few x) and dropping (as much as 80%), but generally it was always going up. And because many people on the world still didn't realize the advantages of crypto currencies, and I suppose they will in the future, I expect it to rise again and we will see the new high in 2018. For BTC and ETH, maybe not for XRP tho..

I agree, however, you are talking on a different time frame compared to I am. There definitely are scenarios in which there is no logical explanation for price action however that is only on a purely microscopic scale which I tend to avoid. I see nothing wrong with your insight overlapping with my own. Thanks for the input :)

Just got yourself a new follower :)

Congratulations @wagnerxd, this post is the second most rewarded post (based on pending payouts) in the last 12 hours written by a Newbie account holder (accounts that hold between 0.01 and 0.1 Mega Vests). The total number of posts by newbie account holders during this period was 2483 and the total pending payments to posts in this category was $1470.04. To see the full list of highest paid posts across all accounts categories, click here.