pandorasbox (59)in #cryptocurrency • 4 years ago 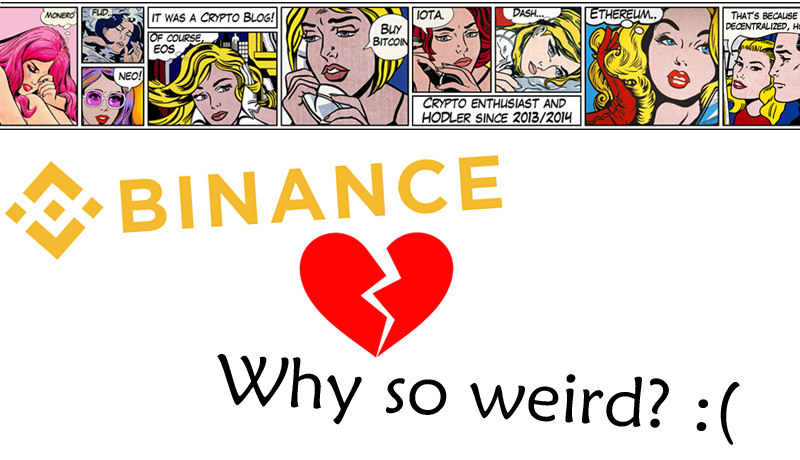 It wasn't too long ago I promoted the Binance Exchange as a better option than Bittrex. Not long after I also discovered some of the downsides of the exchange. Now, it seems as if many of the things that attracted me to Binance in the first place no longer apply.

I pointed out the problems on Binance with collecting 'dust', regarding the fact that Binance will often only let you trade full coins, however if you purchase them without having BNB tokens you don't actually get a whole coin because of the fees, resulting in an untrade-able coin afterwards. This can be avoided by purchasing the BNB tokens first, but this is quite a costly thing in itself too (which kind of negates the trading discount it offers).

Secondly, I also reported in the same post that they seem very quick to suspend their wallets and make it so you cannot withdraw due to maintainance.

Now, it seems there are new downsides to using Binance. I was first most excited about their low fees, and especially the low withdrawal fees. I like to withdraw to my private wallet, so the 0.0005 BTC fee as opposed to the 0.001 BTC fee on Bittrex was very appealing! It seems now, they have silently changed the withdrawal fees to match those of Bittrex.

In some cases the fees are crazy currently. For example it costs 5 ENG, which is about $20 to withdraw Enigma. Overall, don't be surprised if it costs you atleast $10 and up to $30 to withdraw a single type of crypto. Even if the transaction fees aren't nearly that high on the network (keep in mind Binance bundles transactions to save on costs, too).

Not only that, they have also secretly increased the minimal trade amounts! Where before it was possible to trade a minimum of 0.001 BTC they have upped it to 0.002 BTC, and the same goes for ETH which was tradeable for 0.01ETH and now requires you to trade 0.02 ETH. It has caused some traders who trade in smaller amounts to get 'stuck' on trades which they can now no longer sell without adding more money to their account first, and which they cannot withdraw due to the high withdrawal costs.

Additionally, I've read reports that the BNB trading pairs on Binance have had their minimum buy amount highered. This user on Reddit mentions how he cannot buy less than 5 BNB ($80) if trying to buy with IOTA.

Additionally, it seems Binance is quickly losing ground as the 'go-to' place for the latest cryptocurrencies. Kucoin.com is rapidly growing and adding new coins faster than Binance is. There are crypto's on Kucoin of which I have no idea when they'll ever get added to Binance: it seems that Binance has slowed down to about 1-3 new coins a month, whereas the amount of new crypto's is only growing.

Not only does KuCoin offer crypto's Binance doesn't, it also has NEO-based trading pairs which is nice for NEO hodlers.

The only real benefit to Binance that's left for me is the lower trading fees. And since I only trade a little bit now and then, that is not really significant to me. I guess I am just a little bummed out on the fact that I choose Binance for the low withdrawal fees, but now face high or even higher fees at the time when I wanted to make use of the low fees. There are some crypto's that Binance offers that other platforms don't, but most of them you can find elsewhere too.

I must admit that the recent developments surrounding Binance have made me less of a supporter of the platform. I feel like they're using some very weird tricks and loopholes that are costing users money one way or another. There is also very little communication from the team about all of this.

I guess as usual: don't keep your funds on the exchange. There's fishy stuff going on, in all of them it seems. Too bad it's so costly to withdraw and I am getting the feeling that no matter what I do, at the end there's going to be $10-15 worth left on the exchange that I won't be able to get out.

I can't help but wonder: Binance, why so weird? :(

Nice share. Binance took a turn for the worse quick. KuCoin is looking like the go to place. Its coin is on fire today. I think it's up around 100 percent in the last 24 hours.

Yep, definitely! I wanted to get some KCS until somebody pointed out that the profit-sharing part of the coin is not a permanent feature but rather temporary. That turned me off.

I feel like Binance and Kucoin are both using 'grey' tactics (referrals, etc.) and it seems like they're mostly in it for the fast money. Not sure if I really want to trust these kind of companies for any length of time. The fact they're in hong kong doesn't make it easier in case there's ever a problem either.

I did make a Kucoin account though. I'll be needing it for some NEO based tokens soon

You make some good points. As for the profit-share...I believe they are paying out 50% until the end of March and then over a two year period it will drop down to 15%. I think it bottoms out at 15%, so it will be permanent, but the 50% is definitely not permanent. But who knows...2 years in the crypto world seems like a lifetime.

That's true. For my relatively small investment that I would put into it, the short term just isn't interesting enough. The payout would be tiny and I'd have a ton of 0.00003281 of each coin that I couldn't sell anyway. Maybe if I were able to dump 10K or more into it, it would be a more interesting proposal. But for a small hodler the timespan to make enough to cash some out probably is longer than it takes for them to lower the profitsharing.

It's kind of catch-22 because you don't really want centralization and loads of regulation, but without regulation these exchanges can do pretty much anything they want - and get away with it.

We need proper DEXes.. I can't wait.
Even Etherdelta seems 'compromised' these days and shows that it wasn't truly decentralized

I don't trust any exchange right now. I'm frustrated because i can't get my ADA off bittrex since the wallet has been under construction or whatever for the last 2 weeks, sigh; I have 700 ADA just sitting there that I wan't to get off before Bittrex goes under (my assumption is that every exchange will go under at some point)

Yep, they do this a lot as well. I had my IOTA stuck on Binance for weeks. You just have to pray that 'it' doesn't happen during that time.
Fortunately there's a lot fewer big hacks today than there used to be. But can you imagine what would happen if Binance or Bittrex were hacked and all funds lost? Or, worse yet, Coinbase? .....

This post has received a 0.42 % upvote from @drotto thanks to: @pandorasbox.

This post has received a 12.50 % upvote from @steemthat thanks to: @pandorasbox. Thank you for your support. Stay Updated And Use Cool Tools At SteemThat.com Want Some Steemish Built On Ethereum? Get You Some!

i actually really like the bittrex setup compared to others, what is it that youdont like about it? ive tried binance, hitbtc, and a few others but the only i really like to use now are bittrex and kucoin