The Enjin ICO - a Game-Changer?

icoexaminer (49)in #cryptocurrency • 4 years ago (edited)
Disclaimer: I am not a financial advisor and am merely presenting my opinion. Do your own research before investing into any ICO.

The Blockchain revolution is really just out of the starting blocks. Whilst there has been an exponential growth in ICO activity over the last eighteen months, what hasn’t yet materialised is a mass-adoption, blockchain-based end-product that materially impacts tens of millions of consumers.

This will happen, however, and will happen very soon - possibly within the next twelve months, although my own guess is that we are looking at the next two years. The question for those like ourselves who directly participate in these ICOs is - from among the vast array of ICOs out there which have come and gone or which are yet still be to come - which will be the most successful?

Will they tend to be mind-blowing, revolutionary concepts that seek to turn the world upside down? Will it be Datum, for example, who want to bring to market an entirely new concept of data management that puts consumers back in control of their own online identities? That is the romantic image offered up of the power of the Blockchain.

On the otherhand, perhaps they will tend to be those that do something altogether more traditional - like taking existing products and services and improving upon them by exploiting the inherent advantages of the Blockchain.

My suspicion is that we are largely looking at the latter scenario but it will be the former which grabs all the headlines. The Enjin ICO falls into this latter group - they are a decade-old, established online gaming outfit with tens of millions of subscribers listed on its books.

Their industry is online gaming whose growth is still exhibiting healthy signs with a projected increase of 25% in revenues expected to materialise between 2016 and 2020. The lion’s share of this growth (c. 60%) will come from China, Japan and Korea which collectively represent just under 25% of the world’s population. That, then, will explain why Enjin is focusing its efforts in this region. 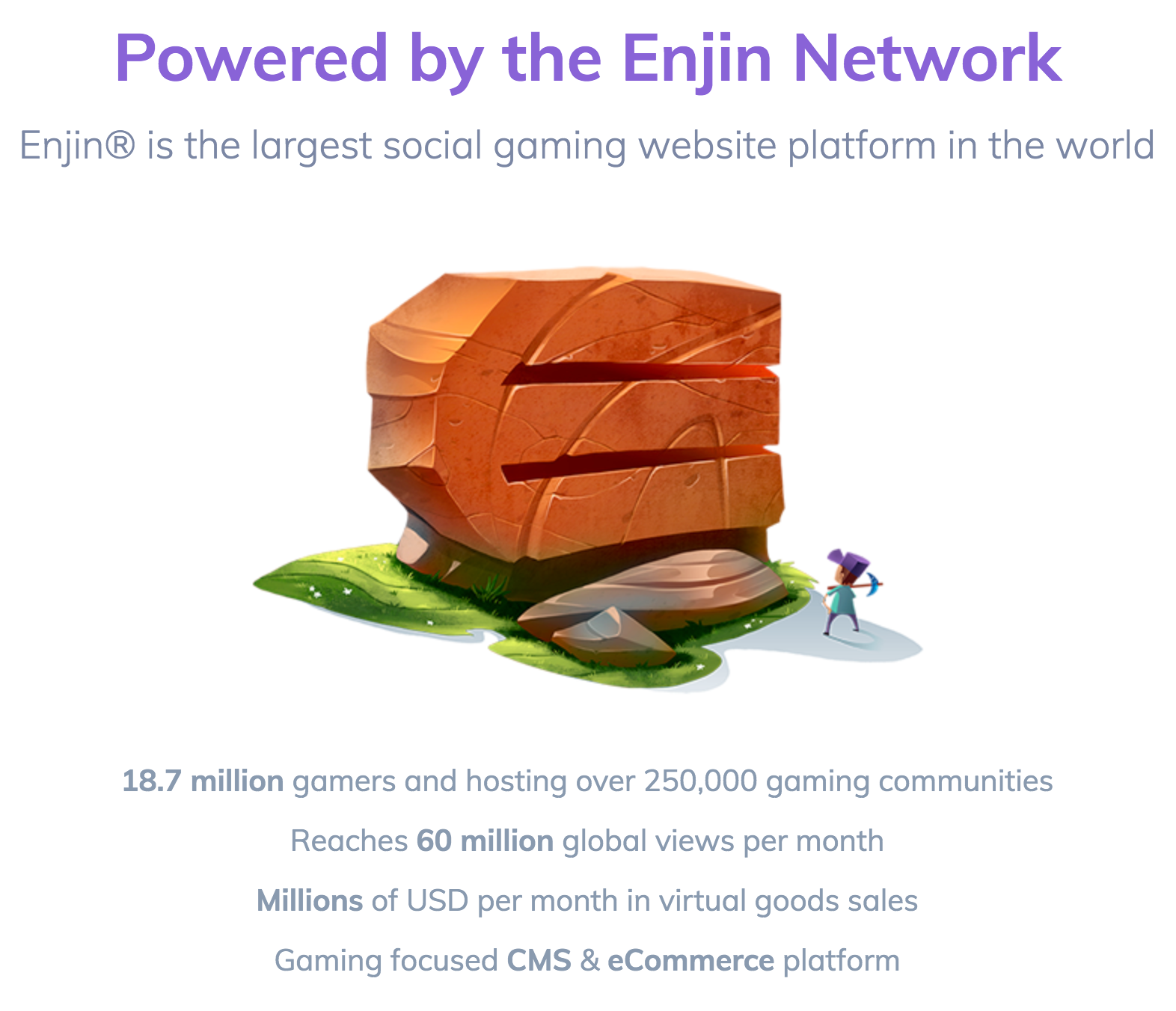 The upcoming Enjin token release, on the other hand, is intended to fund an upgrade to their product offering so as to focus on one very specific segment of this growth. Over three-quarters of the 60% growth in revenue cited above will come from gaming commerce. There are literally hundreds of millions of young kids out there now who are spending a significant amount of their free time constructing their own alternative realities within the online gaming world. Their alter-egos - or avatars - are busy constructing villages, raising armies and navigating distant worlds. These virtual adventures require the use of virtual gold, virtual maps and virtual weapons. And all of these virtual assets need to be paid for in virtual coin. That’s where Enjin Coin comes in.

Of course, there is nothing revolutionary about virtual coin. There is plenty of it out there. What differentiates Enjin coin is that they intend to create a product that streamlines online virtual commerce.

So here’s a concrete example. Let’s say that you’re a hardcore gamer and you have two avatars. Your first avatar is off fighting evil stormtroopers at one end of the galaxy and another is raising pigs and chickens somewhere in the dense woods of Fangorn forest at the other end. Now, it just so happens that your first avatar is dealing comfortably with the Evil Empire, but the second is somewhat cash-strapped as he has just seen his flock of chickens struck down by a mysterious virus. So what does one do? At the moment, not a lot - our gamer could perhaps dip into his purse within the real world in order to finance some medication for his poorly animals in the virtual world. In a post-Enjin ICO world, the idea will be that our avatar can simply haul some of those Star Destroyers that he has confiscated from the Evil Empire and cash them in at his local Enjin’s-R-Us store, and use the proceeds - some Enjin-derived currency - to go off and help his poor farmer.

In other worlds, Enjin are proposing a kit of products that could potentially harmonise trade between the plethora of virtual worlds out there - and this can be done in all kinds of imaginative ways. The major advantage of plonking for a pre-established outfit such as Enjin is that you eliminate some of the inherent risks that are usually associated with an ICO.

Firstly, in terms of adoption, there is little room for concern. Enjin have been around for a long-time now, have an established business model with literally millions of loyal users who constitute a pre-packaged audience for the solution they are now proposing. And it’s unlikely that they will disappear back into the Ether with the proceeds from the coin offering.

Secondly, in terms of execution, their team of engineers have a proven track record - they have, naturally, already demonstrated their capacity to perform through the entire suite of Enjin products that they have already brought to market.

Thirdly - and this is the clincher for us - they are committing a wopping 30% of their ICO funds to marketing and advertising. And this will be a tremendous boon to what is already an advantageous position from a marketing perspective.

This ICO, then, ticks all the boxes as far as we are concerned here at icoexaminer for demonstrating both capacity for execution and marketing. But for those planning to participate in the ICO - this should not be seen as an investment for short-term gains. Speculative purchases are unlikely to be rewarded. Enjin have pointed out that there will be a six month freeze on the Enjin coin before its initial product roll-out to their own Enjin communities. Once we see roll-out, you should like expect another twelve months before the coin becomes firmly established within the virtual commerce world. This is a pure buy-and-hold, in our opinion, and that, as it happens, makes it a much better and more stable prospect. Something rare indeed in the ICO universe.

Naturally, we advise all our readers to perform their own research on any ICO and point out that this should always begin with a thorough reading of the white-paper. The Enjin white-paper can be found here.

Thanks for reading and don't forget to vote the article up if you enjoyed my contribution! You can also follow me for future ICO insights.
#ico #crypto #bitcoin #blockchain
4 years ago in #cryptocurrency by icoexaminer (49)
$6.70
84 votes
Reply 20

I invested and look forward to seeing progress

Very interesting, thanks for sharing. What about Kik? I think their KIN token has the same potential. And Kik has 300m+ users.

Hi g-dubs, thanks for reading. KIN is on my list. I will let you know when I get around to it - otherwise, feel free to follow. Thanks!

I'm following. Follow me back and check out my article on Kik.

Hi g-dubs...Following you! Thanks for reading! And will be checking out the article....Thanks!

Whilst on it face that would seem to make sense, enjins focus on gaming is a huge advantage. Item/digital fraud in games is a huge issue worth billions I suspect, cryptographic secured tokens can and will help to grow this sector and shrink the fraud. Thats just one of the gaming centric folds tokenized assets like this will shine.

Is KIK just a social platform no? Gamers are a different breed of consumer, impulsive and lucrative. Imagine if Steam partners or EA. They do have a former EA executive on the board, the implication is industry sit downs will likely happen, at the very least EA.

Thanks a lot for sharing

Very interesting.. I can see this taking off, the gaming community is well versed in handling digital tokens/in-game money and it will be easy for them to adapt cryptocurrency underlying this. It would be invaluable for trading assets out of one game into another, or selling it on a marketplace. I think that is the future for games for sure and this fits into that ecosystem. Very interesting. Following you from now on!

Very good article, and thanks for sharing this.

There is a problem with Enjin being a closed economy, just like the Kik ICO. I actually have a post where I mention Enjin's and its problem. The problem with a closed economy is that it only benefits​ the platform and nothing else. I actually think Enjin will have some small success but I don't think it will be a runaway success. https://steemit.com/cryptocurrency/@internetotaku/cryptocurrency-market-thoughts-and-ico-talk

Hi @internetotaku, thanks for reading! And thanks for the link - and I've just read through the article. There are a couple of interesting ICO's that you mention in there that I wasn't aware of....so some good leads too :-) Have started following you, feel free to follow back if you like our content. Thanks!

Thank you @johnmarteen. If you'd like to see some more content like this, feel free to follow me for a daily article on the various ICOs that I'm researching. I do occasionally dip into other subjects, when I feel the need for some variety. Thanks for reading!

Awesome insight thanks for sharing....