Even a dead cat can bounce!!!!

dawitnet (40)in #cryptocurrency • 5 years ago 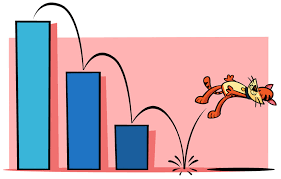 Even a dead cat can bounce!!!!!!!
Tip for long term investment. It is a popular saying among long term investment advocates. The actual meaning of the saying is, investment floats in the market will bounce to higher ground in due course. Don’t you know a business which didn’t make a profit for long time but is still hibernates on low profile. And all of a sudden the company will appear to the main flourishment on an occasion. Normally this type of companies will make it once they appear from the bottom up. Think about car making companies which do on low profile for some time but they come up with new technology and surprise us with their profit record. Apple can be a best example.

Investment is all about waiting in line

Getting small and short term profit is a merchant’s point of view. They buy a certain commodity and sale at certain marginal profit. In these sector governments and consumers associations are concerned about the marginal profit you make. But is investment similar to merchant’s point of view? And what features are levied for controlling?
The investment guru said buy when people are frustrated and sale when they are greedy. This id=s a direct scenario which describes the dead cat bouncing effect. Never buy an investment which already overheated because that is the merchant point of view. The y buy whatever is salable for daily trading. But the investor always waits till the cat bounces. In other words till the merchants are becoming interested, so if you are concerned about long term investment make a profit in the down turn as well as in the up turns.
In a stock is floating in the market there won’t be a problem for the investor whether it goes up or down it doesn’t concern him. What really concerns a stock market investor is total shutdown of the company he invested in.
As a merchant or in today’s term day trader they are not concerned about the companies closing because their attachment is only on short term profit.

Ultimate goal of an investor

Investment requires time to mature. And an investor wants to hold the company major share in the first instance or on down time of the company. So he should be convinced about the investment profile that he is investing in. think about coca cola, apple, or another. If you buy an apple share when it was below 100 dollars what will you be worthing today. In order to invest in an investment believe in the company service first. The same is true in crypto investment. I really recommend GRAFT blockchain investment. Because when I look their ambition on using cryptocurenncy as a credit card or debit is quiet an idea. Everybody will use it so, in the first place coins that are acceptable by graft will have an increasing value because of high circulation and volume. And the second thing is if I invest in GRAFT coin itself I will make money or value adds every time the blockchain is in use. So either way an upward trend for an investor.

But is the trek journey going to be simple? The journey of investment is the hardest of all that is why the reward is high. There is going to scarify many cats to bounce. But the cats will bounce to your favor.

The quick brown fox jump over the lazy dog

Which one is your fox and the lazy dog?

Yes it is really true long term investers are the backbone

I'm new to investing in general and have never heard this phrase before - but it makes perfect sense. I'm a long term holder and definitely believe in the same principles that you mention here - I basically don't invest in any token or coin that doesn't have a strong company and productive idea. It just makes sense!

This term got popular due to cryptocurency but it was there.

I agree! When investing, you really are investing in the person and a little bit his idea, but especially his ideals. Knowing he is going to take care of things, and your investment is going to return with interest in the long run so that your money is working while you are, too, then that's all you really need. Investment isn't really about this day trading thing. That's almost market manipulation on a small scale, not brandishing anyone who does it with offense or anything. Just is what it is. Slinging money around inflating value for no purpose but self gains. Again, not knocking the efforts to make money, but that's something that makes markets less predictable. You can pinpoint the needs and wants of the human population and purchasing power, fairly easily, with in reason. What's much more difficult is predicting if some smart guy decides to move his currency around the world a few times in a few minutes. Obviously, the effect of this action depends on scale, but if a whale did something like this, they would be watching him at the very least. Anyways, doing your research and hodl-ing is the name of the game. I never heard this phrase before. Thank you for sharing.

That is very much true inveatment need time and careful sellection

Congratulations @dawitnet! You have completed some achievement on Steemit and have been rewarded with new badge(s) :

Hi friend how are You? I want to withdraw the money but i dont know how. Please explain the Best method thank you

Do you think Blockchain wallet is good?

This post was resteemed by @steemvote and received a 40.38% Upvote

Longterm investment sure is the best, but predicting the growth of what you have invested in is very complicated. You have to be cautious when investing.

Ok sir how are you

I don't know you, so I am carefull.

Yes you dont. I have seen you on donita post

I can't feel good about me I can't have a kid.

Am here and new to such thing

Thank you dawitnet for making a transfer to me for an upvote of 1.33% on this post!

WOW hectic :D How you doing? See you haven't posted in 15 days.. Where you?

I totally agree- you must be in it for the long haul! Great advice :) #steemitbloggers