State of the crypto markets 2018 and beyond (EOS savior?)

amberlamps (39)in #cryptocurrency • 3 years ago (edited)

Consensus has come and gone, they hype and price pump that many expected to follow hasn't happened, and meanwhile the markets stay depressed with no sign of breaking the downtrend.

In 2017 Ethereum was the driving force. From Consensus all the way through the December blow-off top, there was one constant, Ethereum lead the way for the market.
Ethereum gave the world a brand new way to raise capital and fund ideas through ICO’s. In an unregulated market with little scrutiny, anyone with a keyboard and an idea could instantly raise millions with little to no effort. All that money created out of thin air, funneled in and out of the markets creating the massive price pumps we saw throughout the year. It all ended with Bitcoin blow-off top just under 20k.

Now 2018 is here, markets have pulled back to what some consider a healthy retrace, possibly gearing up for another bull run. However things don’t feel the same, Bitcoin adoption is still practically non-existent, lighting network shows signs of life, but lots of skeptics out there if its even a viable option for “micro transactions.” And then we have the B-Cash crew further muddying the markets with misinformation which is not helping the Bitcoin brand at all. This is very apparent in the constant decline in BTC dominance, basically since the beginning of 2017. 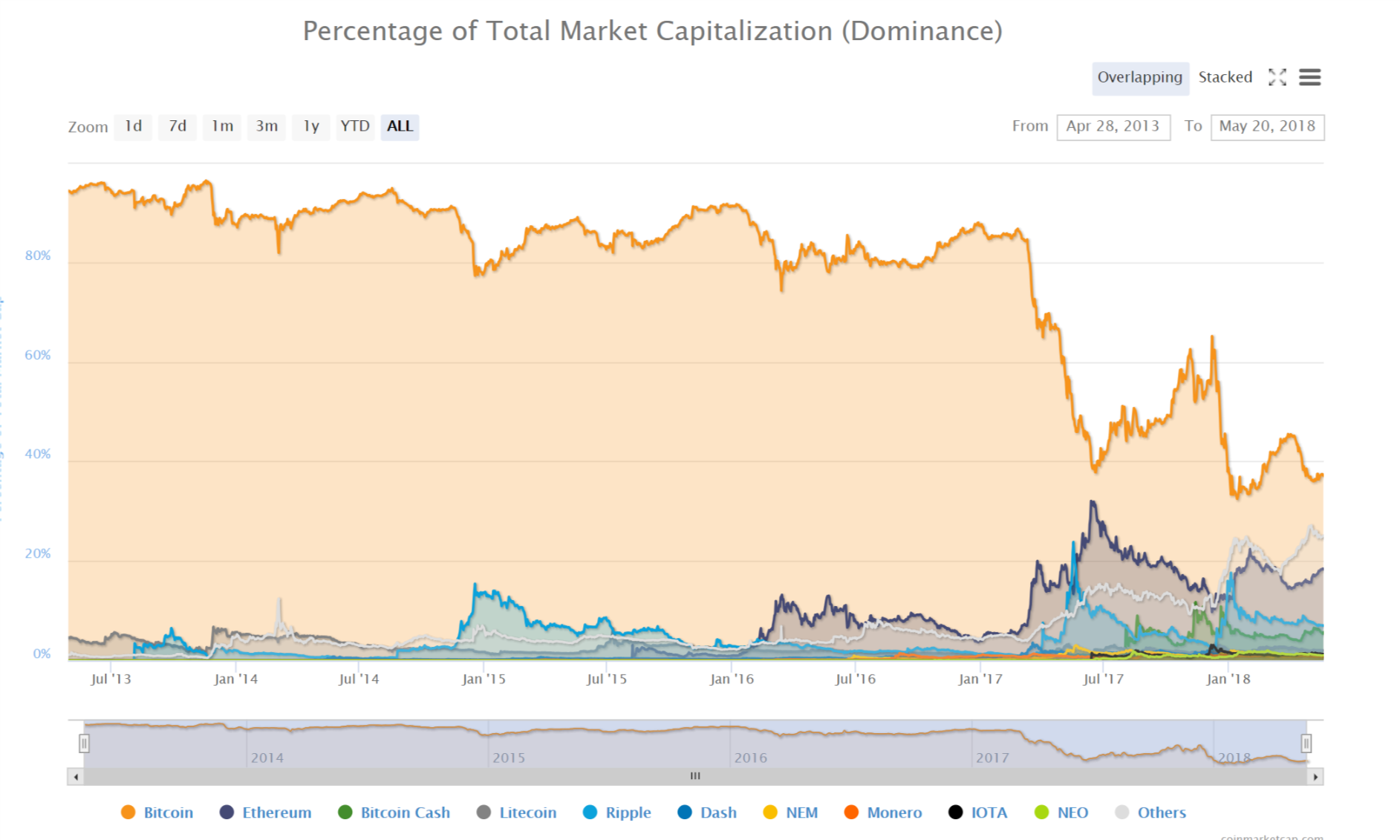 You even have former BTC maximalists like Richard Heart losing faith in BTC and launching their own “alt coins.” Check out this video of Richard Heart, describing his view of the current market and BTC/alts (warning, very depressing video).

What will it take in 2018 for the markets to return to bullish trends, and what are the tokens/coins that will be the market movers this year, like ETH was last year?
I believe 2018 will be the year that protocol platforms dominate the space, and where the most growth and innovation will be. The direct ETH competitors are where real world adoption will come from. Real world adoption is what we need for the speculation bubble to be filled, and new growth to enter the market.

What do I predict will drive this? My personal belief is that EOS will be the catalyst that can cause the markets to regain momentum and really lead the markets in 2018.
You may say, “EOS is just an ERC20 token, no working project, not decentralized, and all the other usual hater comments that spring up every time someone mentions EOS.” Im not going to explain in this write up why EOS is actually plenty decentralized, not an ERC20 token (after June 1-2) and doesn't rely on a central entity (block.one) to succeed. EOS has one of the most active Githubs, even Vitalik Buterin has recently contributed and collaborated with Dan Larimar to fix a small bug/loophole that he found in the code. EOS has one of the biggest communities in the crypto space, 50k+ in the Telegram, many Facebook groups with 10’s of thousands of members.

Once EOS launches in June, there are already almost 20 active/announced projects that are airdropping onto EOS and launching shortly after mainnet launches, here is a ling to 13 of them https://www.whiterabbiticos.com/blog/upcoming-eos-airdrops-you-dont-want-to-miss

These airdrops aren't even ones that will be funded by the $1 billion VC fund that block.one has committed to projects developing on EOS mainchain. We can expect, from prior block.one announcements at PR events, and hints dropped in telegram channel, that many if not all the VC funded projects will be distributing their tokens as airdrops to EOS token holders. There are a number of advantages to this form of launch, as opposed to the traditional ICO funding that happened last year.

One other very overlooked aspect of EOS is the immense interest from China. China has the most BP candidates, Okex which is a Singapore based exchange, consistently has the highest volume on EOS, even higher than Bithumb. Many tout NEO, Qtum, or Vechain as being the “Chinese ETH” no one realizes the interest the Chinese have in EOS is far greater than any of those other projects. One project that is based in China, ONO is a very promising dap that will be moving to EOS once mainnet launches. For those of you who don’t know what ONO is, its worth looking into it, they have a Wechat with well over 1 million participants. Here is a link to their website https://www.ono.chat/ Here is a picture of an EOS meetup in Beijing, with 400+ attendee’s and over 200k online viewers. 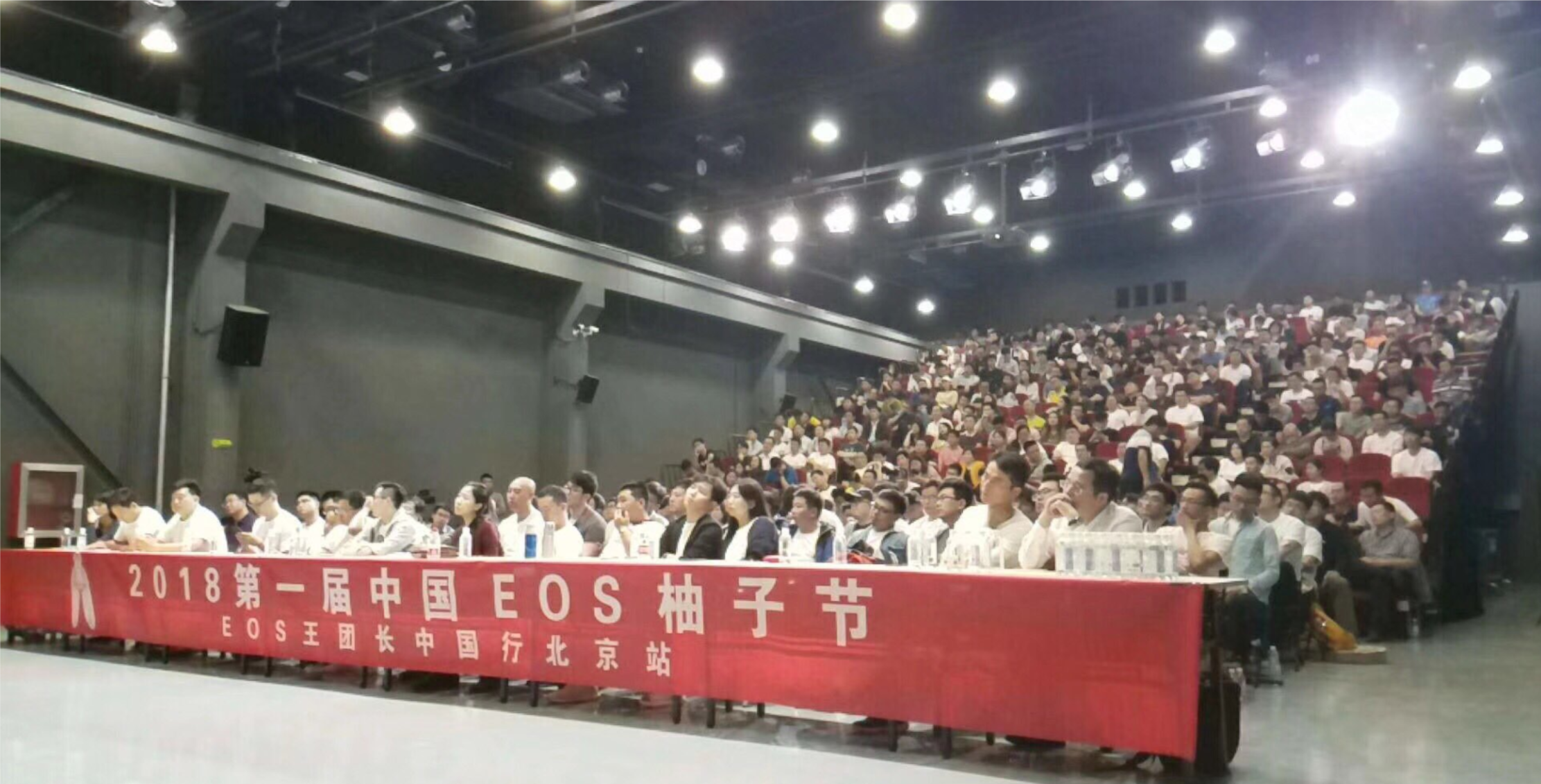 The point of this write up, is to bring a bit more understanding to how powerful EOS can be, and how I think it will be a catalyst in helping an otherwise very over extended, depleted market. Where speculation is running out and we desperately need real world use cases and daps where people can actually interact and earn/exchange cryptocurrencies (much like we have with Steemit). If we can get a robust use case on the internet for crypto, then we can transition eventually to real world use cases for some of these crypto currencies.

Some great information posted @amberlamps I still believe that sub USD20, EOS is a steal. IMHO, in 12 months this coin will blow up and deep FOMO and regret will have kicked in from the masses that did not take the plunge.

Once people wrap their head’s around that this is an operating system for the blockchain, that helps to make dapps into a simple process and allow devs many of the tools they need, then the value proposition will become clear. Oh yeah...those free airdrops will also help!

Great point bringing up that EOS is a "operating system" for block-chain, that doesn't get stressed enough. Where ETH is literally only an ICO launcher at this point, EOS is changing the way daps are funded, as well as actually providing a operating system where they can effectively run. Hello @amberlamps. Thanks for referencing our White Rabbit article. What's the best way to contact you?