Macro Analytics on all tweeted Cryptocurrencies this week

20 tweeted coins in the "crypto-sphere" for this week

Tweets related to cryptocurrency this week were analysed for potential altcoins to further DYOR on by HunterCat. We shall look into a few alts together on steemit! 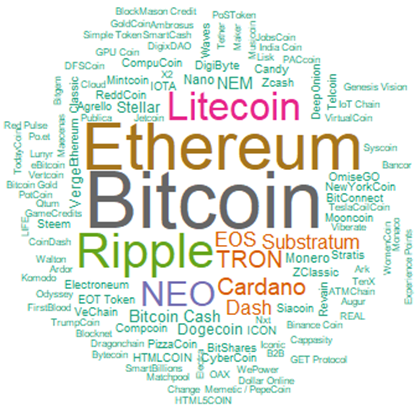 Not surprisingly, Bitcoin and Ethereum have been do-do-do-doooominating since time immemorial in terms of market cap, and also on Twitter . Thus, they have been excluded in this week’s analysis to give other coins to be discussed. Ripple, Litecoin, NEO, Cardano, Tron takes up the next 5 spots. 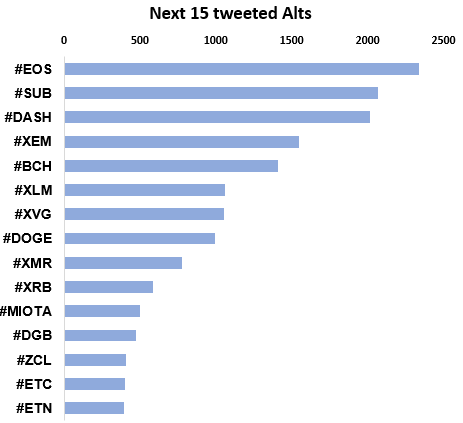 While its role as a ‘real’ crypto-currency has been questioned numerous times by the crypto-community, emotions aside, Ripple remains the top few tweeted for a few weeks.
Made to lower cross border payments, XRP recently collaborated with Cambridge global payments in a pilot programme to use XRP through xRapid. According to a tweet, 6 companies are testing XRP cross border payments. Furthermore, RippleNet, Ripple’s blockchain network now has more than 100 financial institutions.

Easy deployment of decentralized applications on a blockchain architecture that can potentially scale to millions of transactions/sec, with no user fees? EOS is here for you!
A notable event in the EOS calendar is the development of DAWN 3.0. DAWN 3.0 is in Early Alpha and reported to be unavailable in a public TestNet till the end of Q1 of 2018. Embedded in DAWN 3.0 is an infinite scaling and decentralization blockchain technology! That's pretty damn amazing if you ask me!

EOS also has plans for a decentralized exchange(EOSfinex) on EOS.IO, and is projected to be within this year! With all these positive and good news, EOS seems like a pretty solid project. However, as mentioned in my first post, the Buzz, the tech, and the price are all important considerations to your decision for when to enter a trade!

Comparing with previous weekly analyses, we can see the changes in "Tweet Rank" across different alts.

Digibyte’s tweet rank leaps from 29 to 19, with a recent beta test release

Cybersecurity for digital payment and decentralized is Digibyte’s focus. It is a public, fast growing decentalized blockchain, and reports itself to be the fastest, longest and most decentralized UTXO blockchain. Earlier this year, Apple approved the Digibyte iOS wallet for beta testing, and perhaps it has been slowly gathering attention since then. In addition, it’s beta was released last week, and is accompanied by a 2.87% increase in price from a week ago. TA analyses on 2 March for DGB/BTC point towards a ‘sell’ for DGB.
However, its roadmap for this year suggests multiple events/ development, so expect more news to come for DGB this year!

After finally getting my Steemit account, you have no idea how much I LOVE it here. I will be slowly migrating all my content to this as my main platform, starting with this post. Even HunterCat is hurrying me to do so! Haha!

Thanks for tuning in this week!

That’s it folks! Have a good week ahead, stay safe and see you again next week!
If you do have any comments/feedback or ideas to contribute and turn this blog into a better educational tool for the crypto community, do feel free to contact me!

Submit
$3.70
46 votes
16
Authors get paid when people like you upvote their post.If you enjoyed what you read here, create your account today and start earning FREE STEEM!
Sort Order:
[-]
twitterbot (56)  ·  2 years ago

I recently read about the EOS and I think it will have a tremendous increase in price in the future .. I also believe in monero and electroneum which I do mining..Very nice post keep going!!

Hello cryptomaniacsgr! hahaha welcome again! Thats nice that we have similar views! hah thank you for your support ! =)

You worth it man its a very nice article!!

Thank you ! =) haha thank you! lets create nice content ard here and be safe and happy!haha while i gotta say its hard to get posts to top pages!

You goal is to Appreciate from Appreciating yourself.
The top pages are dominated by those who have been here almost 2 years.
I would not worry about them.
Just keep doing what you do.
Keep appreciating others you know and appreciate you.
And continue to stay in touch with a community you connect with.
@steemexperience hopes to help you keep doing what you do.
Great Info! Thankful your here. Ask any questions on the discords.

Hello mr @jacobts Yes I shall do my own little thing and connect with like minded individuals ard here.. its more of to make friends, and have a healthy discussion than to be at the top.. =) thanks for dropping by, and yea! @steemexperience does help a lot I am there now! =)

hey ijaz! haha good to see you here again! I hope all has been well for you! =) Thanks for stopping by and have a great one! =)

Great reports. EOS sounds amazing with no fees and the ability to scale which is the Achilles heel of Ethereum.

I expect some pretty big jumps in EOS's near future. It's definitely one of my favs.

hello @cybilbitgirl and @daniarold ! its good to see you two again! haha yes! I didnt know about EOS till HunterCat pulled it off the internet! However, my crypto portfolio currently is trapped in a few bad coins... Hopefully, I can realign my portfolio and make it better ! =) Thanks for coming! =) I hope you two have a good time and stay safe! =)

I find Doge coin so very very interesting. there it sits in the top 15.... and there's not much to it, no big claims, no big dreams.... yet it's always there. ;>) ... I'm thinking my little doge coins will do very well this year !

@daniarnold haha I actually will be mentioning DOGE in one of my posts. Its actually an older post, but i havent had the change to migrate it to steemit yet. DOGE is really interesting, and the doge symbol is kinda cute too aint it? =p

Hello @felixcryptocat, Thank you for participating in the steem nexus contest. As promised, we got you 35 upvotes from various curators that help @steemnexus. Congratulations, and all the best for your future endeavors on steemit. Spread the word, so we can support more new comers on steemit.
Best wishes,
Steem Nexus 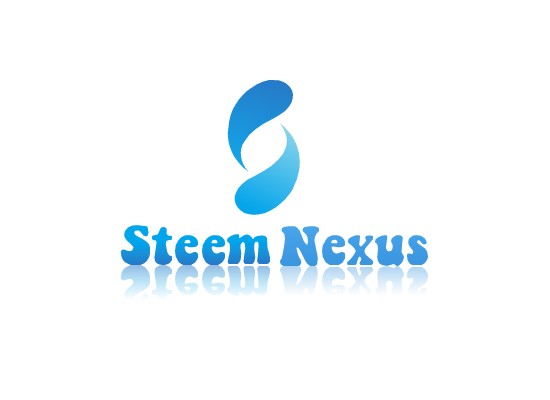 Thank you STEEMNEXUS! you guys are amazing! =)