Last week, I laid out some of the details about how my friends and I have been restoring/reimagining a 70's EM (electro-mechanical) pinball table. I left off that article with our beginning to populate the play-field with components... which Steve and Josiah binge-installed over the course of a about a week. The next step was to start wiring those components to the FAST Pinball controllers. 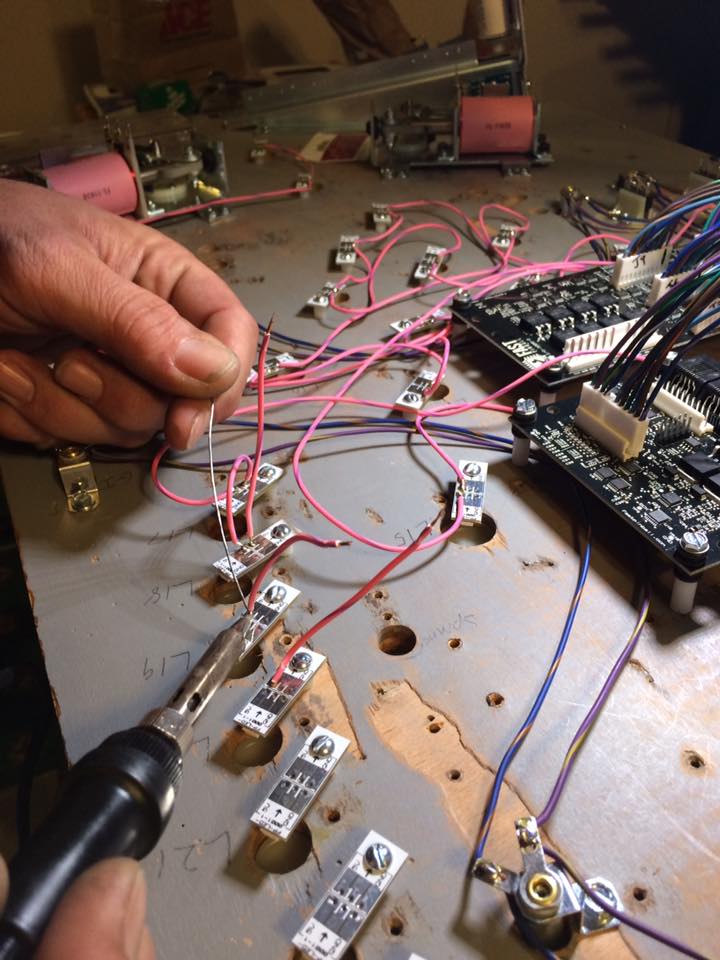 FAST Pinball is a small company in Gig Harbor, WA that designs custom pinball boards, allowing for interfacing to your pinball components over USB. We ended up using their Nano controller and 3 of the I/O expansion boards. We also picked up their DMD kit. These guys were hella-supportive in getting our project off the ground. I highly recommend using their boards for this part of a new build. Once we got the boards wired up, we finally had the pleasure to see our previously defined attract mode spring to life...

Of course, to make this happen we also had to setup a computer with the Mission Pinball Framework and have it load up our custom MPF configuration. I actually submitted a guide detailing all the steps for creating a near production-ready environment. With everything wired up and the computer mounted in the cabinet, it was time to get the play-field off the rotisserie and into its final resting place. Stumbling out of the gate

The next few weeks following would be mostly config changes and gameplay testing, but it wasn't the smoothest sailing. It took us several days of troubleshooting to get the DMD talking to our config. The unit we received did not come flashed with any firmware. Once we figured that out, we ended up flashing the wrong firmware onto it. And once we figured this out, it was determined that the flavor of linux our computer was running required some permission modifications to connect over serial connection. But eventually we got it working and it was time to go prime time!

The Northwest Pinball and Arcade Show

Our ambitious goal of having a flipping pinball table at NWPAS was suddenly looking more than plausible. After a flustered week of last minute tweaks and config changes, we were up at 5AM on a Friday morning driving to Tacoma, WA. The FAST Pinball guys allowed us to setup our game on their booth which was super rad of them. From the banging around in transport, we had a minor switch issue we had to address before the show, but by 10am the table was ready to roll. Over the 3-day event, the game logged around 250 total games and other than some sound-synchronization things, was pretty darn stable. 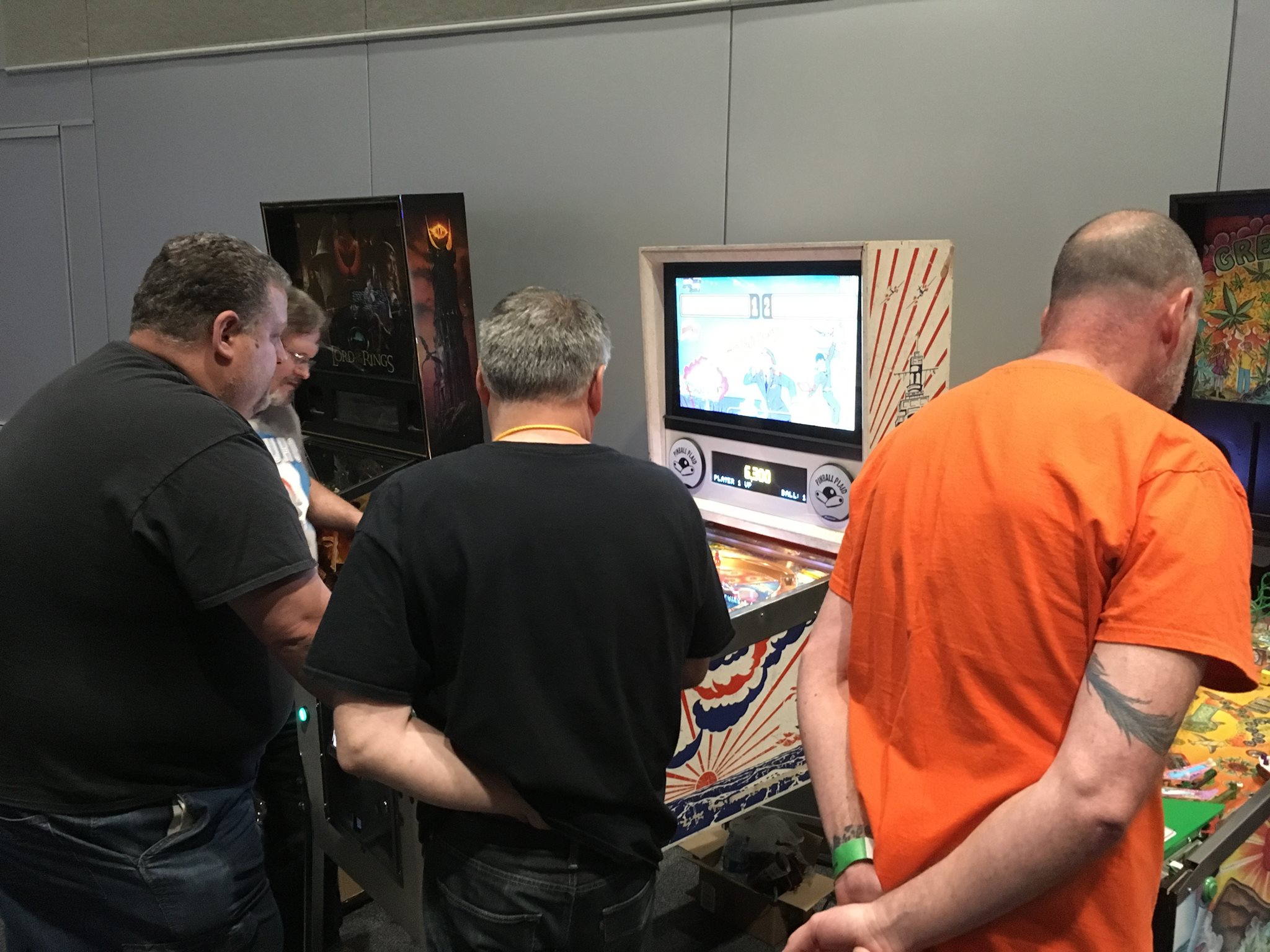 I call it mission accomplished for the short-term, but we have much to do before we lock down our build of the game. We expect to do this by mid-Fall, however. Steve has already begun constructing a new cabinet for a potential "Hike and Throw" game sure to frustrate us all Winter.

I'll try to keep you guys up to date on the final pieces of Combat dev as those things happen here over the next couple months. In the meantime, feel free to checkout the Pinball Plaid Podcast if you'd like to learn about all the nitty-gritty details. I leave you with a video interview that Steve and Josiah were in attendance for during the show. Thanks for reading!

Very cool article. Thanks for posting.

I had a Black Knight 2000 at one time (lost it in the divorce) and it was the best PB machine I ever played. It had a feature called "Magna-Save" and it could re-route the ball before the drain, if you caught it at just the right time. I miss that machine.

Damn man, sorry to hear about that. Life is short. =/

Black Knight I hear is one of the better games, but I haven't had a chance to play it. I probably could have logged a few games at NWPAS, but I was only able to attend the first day of the show and spent most of my time there talking to the FAST Pinball guys. The Combat table lives at Josiah's place currently, but I own a William's Grand Prix (that needs some work) and I just recently added a Bally Shadow to my collection.

Man I got anxious reading through all of the setbacks and frantic rush you guys had to go through to make it to the show. I can't imagine the satisfaction you feel having totally restored that machine, looks perfect.

I knew if we didn't have an ambitious deadline we'd probably never get the project off the ground. While I was hopeful, having the table in a playable state by the show was a total crapshoot. I agree that "Frantic" is a good word to describe our Spring. Thanks for reading the article. =)

No problem! I recently restored a laptop replacing the screen/installing lubuntu to get it to run. Some people may just say toss it out, I take great pride in restoring hardware and not letting it go to waste.

That is the rub with deadlines and stress isn't it? Quite emotional when you have it breathing over your shoulder but it's often a powerful and essential motivator to get it done.

I think the end result came out pretty damn good! That looks like a solid restoration/mod considering the condition described, haha. I'm just curious, how many hours went into this so far? I imagine it must be a pretty good amount, lol.

Most definitely... a ton of hours, haha. I think we were getting together at Joes each Saturday and Sunday for all of May. Prior to that, Josiah and Steve were working on the build during the week while I wrangled MPF config stuff into the am nightly. Blood, sweat and tears but we got a playable game out of it. It's a mean game, too.

Man, that is some serious time sunken into that beast, haha. I can only imagine the frustration you guys must have felt at times with all that work going into it. But, yeah, you guys ended up getting a sweet little machine out of it that looks great and I bet it's a blast to play!

You Received an UpVote from @worldclassplayer. To Learn More, See DetailsHere