Socialism and Mediocrity in Ecuador

franklinlopez (42)in #countries • 2 years ago

A race to the bottom: the legacy of socialism in the 21st Century

Fidel Egas, the owner of the largest bank in Ecuador, has raised a huge cloud of dust because in a tweet said that the problem of the Ecuador is that Ecuadorians are unable to accept as they are and are not aware that this is a mediocre country. Such claim was not very well received, many insulted him with blatant chauvinism "for being a banker;" or “that he should not be allowed to criticize a beautiful country, its diversity and the goodness and nobility of its working people. That only the country´s political and economic elites have historically been mediocre.”

It is not new that there is a cultural ethos that favors caudillismo, the common noncompliance with the laws, the inclinations to deceive or a widespread indolence, etc. It is well known that not only in Latin America but in many other countries as well "there are cultural patterns that repeat again and again the big mistakes in the conduct of public affairs." However, it is blatantly ignored that the state intervention that started with ECLAC's Raúl Prebisch and culminated in the socialism of the Twenty-first Century has exacerbated the problem.

Let´s us examine some of the policies that lead to mediocrity. For example, those that encourage indolence: one of the <i<conquests of the workers was the reduction of the 44-hour work week to 40. Policies like the prohibition to work part time or outsourcing are enshrined in legislation. The minimum wage is not linked to productivity, it is a policy strictly political that creates a mass of people, particularly of young people who do not have access to employment, it propels them to live back with the family, including after marriage. They go from the patriarchy or matriarchy of the family to depend on the generosity of the state, hence encouraging individual irresponsibility. The number of holidays has been increased, but the most common practice is that if the holiday falls on Friday or Monday, governments establish a “bridge of four days.”

The obesity of the state brings out what was said in the Soviet Union: "they pretend to pay us, we pretend to work." Jobs in the public sector depend on politicians, whether on those governing or on those that are waiting for their "turn." It is striking to visit a public office where there are waiting rooms with hardly anyone in the service window, but it can be seen bureaucrats walking through the halls "pretending" to be engaged in something important. Once inside the office, they are dozens of desks, each with a computer, what are they doing? Filling out papers, memoranda, notes of "urgency," many times asking for a salary increase! In the weekend they are "obligated" to take part in activities to increase the constituency (more jobs are offered, of course), for such efforts they receive breakfast, lunch and even cash. Moreover, the bureaucrats have advisers, consultants, with or without contracts with companies in the private sector. It is hard to believe but in Ecuador, there was a Secretary of the Good Life, at ministerial level! Its personnel learned yoga, tai chi, meditation and other fads taken from New Age fantasies or from the advises of self-help books. Since Freddy Ehlers, the Secretary, was an ecologist, he and his staff would come out to embrace trees . This gentleman, whose name must not pass into oblivion, toured the world proclaiming that Ecuador was returning to pre-Hispanic indigenous practices. 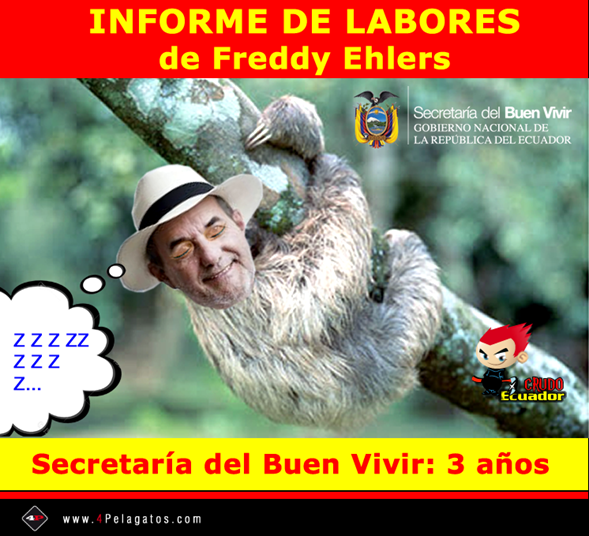 Admission to a public university is free, although there are entrance exams; the number of university students who graduate far exceeds demand in the private sector. That excess supply is filled partially by employment in the public sector, although the benefits offered by the state are substantial in number: fourteen year salaries, subsidies for buying car or housing, health care and unemployment severance, unsecured loans and mortgage, retirement, they are of poor quality as in health care. Unemployment and retirement incomes are not enough for old-age security. Doctors, lawyers, engineers who had no "godfather" in politics are taxi drivers, waiters, or smugglers (in the best case), because the alternative to the lack of employment is crime. It is for this reason that Venezuela is the second most violent country in the world . Many scholars in universities from the outside with post-graduate studies in master's or doctorate programs are with the same problem and to a greater degree, especially when they received their scholarship by merit, not political "levers."

The state propaganda was designed to convince society that mediocrity has been beaten. Cuba devoted enormous resources in the sports area to win Olympiads, it claimed that its health and education systems were the best in the world. Rafael Correa said that his economic leadership had created the "Ecuadorian jaguar," on a par with the Asian Tigers. But at the end of the day it is revealed that the Cuban system is a falsehood; when medical doctors, for example, go to other countries they are placed in administrative positions because they can't diagnose. The economy of the Ecuador is in trouble. Not only mediocrity was not beaten, there has been a race to the bottom, to inferiority.

My guess is that it is a race that Ecuador is going to win!

Pretty disgusting case study. Thank you for letting us know!