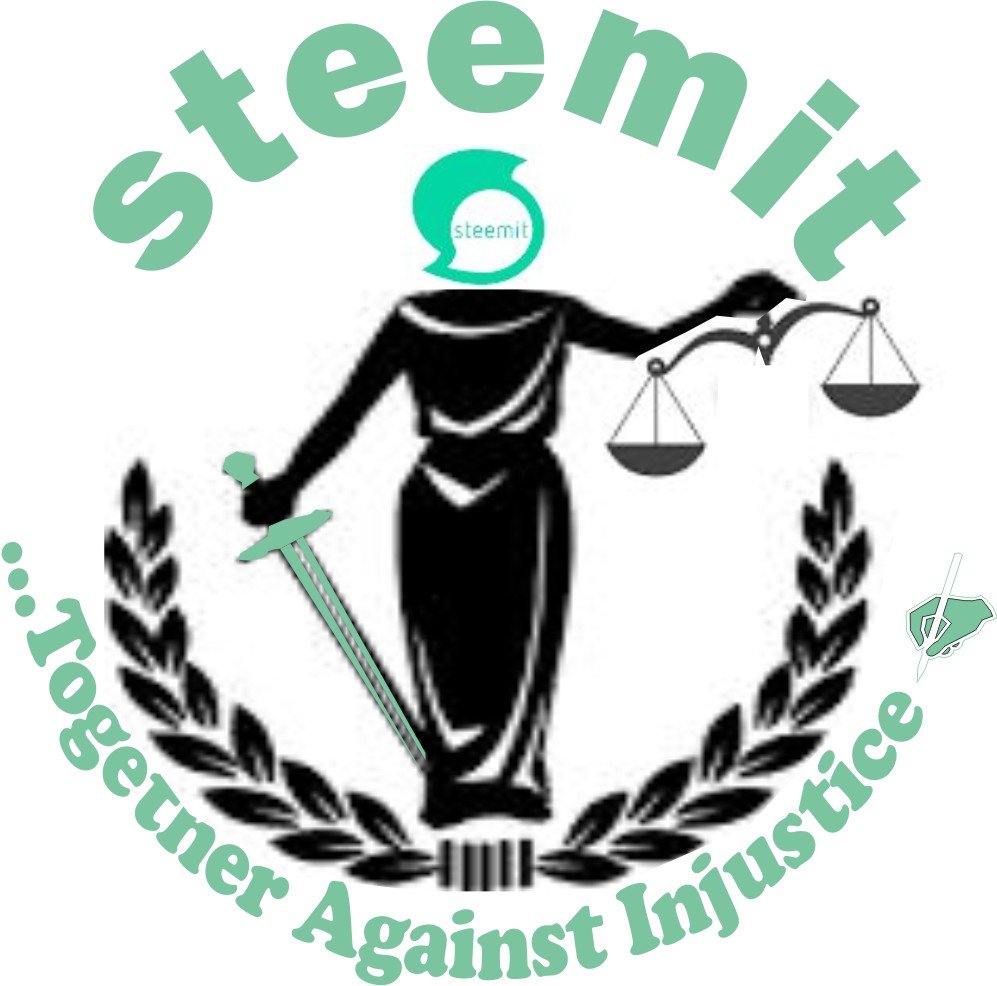 Today, our world is endangered because of the grave injustice unleashed upon it by fellow human beings who have found themselves in the position of power.

Unlawful detention, extra judicial killings, human trafficking, organ trafficking, child labour, slavery, gender discrimination, gender violence, police brutality, social media clampdown, press victimization, racism, etc are some of the injustices confronting our world today. Do we fold our hands and do nothing about it? Absolutely no!

We believe that Steemit is not an ordinary social network, it can be used as a tool of social change; to speak against injustice, to create awareness about injustice and to give relief to the oppressed in the society.

In this edition of the TOGETHER AGAINST INJUSTICE CONTEST, write an essay (not more than 250 words) condemning rape. Tell us why the victims of rape (mostly women and girls) should not be blamed and stigmatized for being raped, and what you think can be done to prevent rape.

Winners will be selected based on the quality of their entries, that is, how compelling and articulate their submission is. The winners will be unanimously decided by some members of Amnesty International who have volunteered themselves for this purpose.

THREE winners will be selected for a share of 6.5SBD.

The two highest ranked upvoters of this post, excluding bots, get 1SBD each as a token of appreciation for their support. Upvoters may or may not be contestants.

Submission will close 12 hours to the payout of this post. Winners will be announced shortly afterwards.

P.s: 100% of upvotes from this contest will be saved up towards supporting educationally disadvantaged children in the slum of Lagos, Nigeria. Therefore, upvotes are welcomed from everyone who shares in the vision of a just society. We Steem, therefore we are.

.......together against injustice......conquering injustice through Steem power.

Special thanks to @sndbox, @majes.tytyty, @hr1, @stach, @steem-lagos and @surpassinggoogle for inspiring this contest through their altruism on the blockchain. Keep up the good works.

Please kindly note that only submissions via links will be accepted as valid entries. Thank you.

Here is my link thanks for the opportunity:

Congratulations @gandhibaba, this post is the second most rewarded post (based on pending payouts) in the last 12 hours written by a Newbie account holder (accounts that hold between 0.01 and 0.1 Mega Vests). The total number of posts by newbie account holders during this period was 3856 and the total pending payments to posts in this category was $2742.57. To see the full list of highest paid posts across all accounts categories, click here.

Here is my entry ^_^ Hope you like it https://steemit.com/injustice/@redmonkey/rape-is-not-normal-together-against-injustice-contest

Here is my entry:
https://steemit.com/freedom/@mirabelgeorge/rape-victims-are-not-to-be-blamed-and-stigmatized

Congratsss... Your plan is working and the most probably i will be the winner of this contest. Wait and watch buddy💙

no idea what my upvote is worth most likely nothing.

Slow and steady win the race don't be haste

Here's an entry to support Together Against Injustices Contest #2 . Hope this will be fine and could help and support the contest goal.. God bless

Rape is a heinous crime which is committed more and more with every passing day. It renders life of a person hopeless and lifeless.it needs to be brought to an end. I think moral education must be given to children right from beginning and females shouls be trained as to what to do and how to save themselves when they fear a threat of rape

You got a 10.48% upvote from @buildawhale courtesy of @gandhibaba!
If you believe this post is spam or abuse, please report it to our Discord #abuse channel.

For the beauty in the nature of this contest. Here's a link
https://steemit.com/contest/@apine/condemning-rape-and-victim-blaming-863be6fdaac1b

Can be accepted if I edit down to 250 words and repost the link here ?

You got a 8.41% upvote from @postpromoter courtesy of @gandhibaba!

The problem of the world, we can map some of the events that exist, which can illustrate how exactly the world problem.

Some facts have testified that economic injustices often have a negative impact on people's lives. Resistance by the way of violence becomes an option because victims of this injustice have long lived in misery.

This is the link to my entry..

Thanks for the opportunity. https://steemit.com/contest/@oduwole/together-against-injustice

This is link to my entry

thanks for the chance to participate

This is my entry.
https://steemit.com/opened/@juliuselohor/rape-a-major-issue-in-our-society

@moneyinfant has added your contest to the list Steemit Writing Contests: Issue #37. The list is updated on a daily basis and your contest will remain on the list until its expiration - there's nothing you need to do.

Thanks for having this contest listed. Keep up the good work.

It's an excellent contest, thanks for hosting it. I see there's been quite a bit of response too.

Yes. The entries are still coming in and we hope to continue hosting the contest regularly.

Thanks for having this contest listed. Keep up the good work.

hi @gandhibaba! Thank you for giving us this opportunity to take part on TOGETHER AGAINST INJUSTICE CONTEST.

I am dropping my entry here. :)

TOGETHER AGAINST INJUSTICE CONTEST, WE SHALL REMAIN! This is my entry
https://steemit.com/gandhibaba/@feebie/do-not-rape-be-raped-together-against-injustice-contest

this is my ticket

Thanks - here's my entry:
https://steemit.com/contest/@orangina/f-ck-rape-together-against-injustice-contest

Here is my entry
https://steemit.com/contest/@ponmile/together-against-injustice-contest-say-no-to-rape

Please consider my edited one. Forgot to tackle on rape. I missed it. Thank you!

Here is my entry for this contest. Thank you.

As I'm more of a story teller than a writer, I presented it in a story form

I hope it is admitted

This post has received a 16.81 % upvote from @booster thanks to: @gandhibaba.

Oh no, I was just about to make my entry before i saw that the contest status has been changed to closed! 😢

What happened to this?👇

Submission Deadline and Winners Announcement
Submission will close 12 hours to the payout of this post. Winners will be announced shortly afterwards.

Honestly, i was working with that because i saw the contest opportunity lately yesterday.

Here's my entry anyway, perhaps I get considered!
https://steemit.com/busy/@tomset/busted-guilty-of-innocence

Entry accepted. Sent to the judges for evaluatiom. Regards.

Thanks for your consideration. :-)

Just showing you some love