THE FEAST OF WEEKS AND THE HOLY SPIRIT 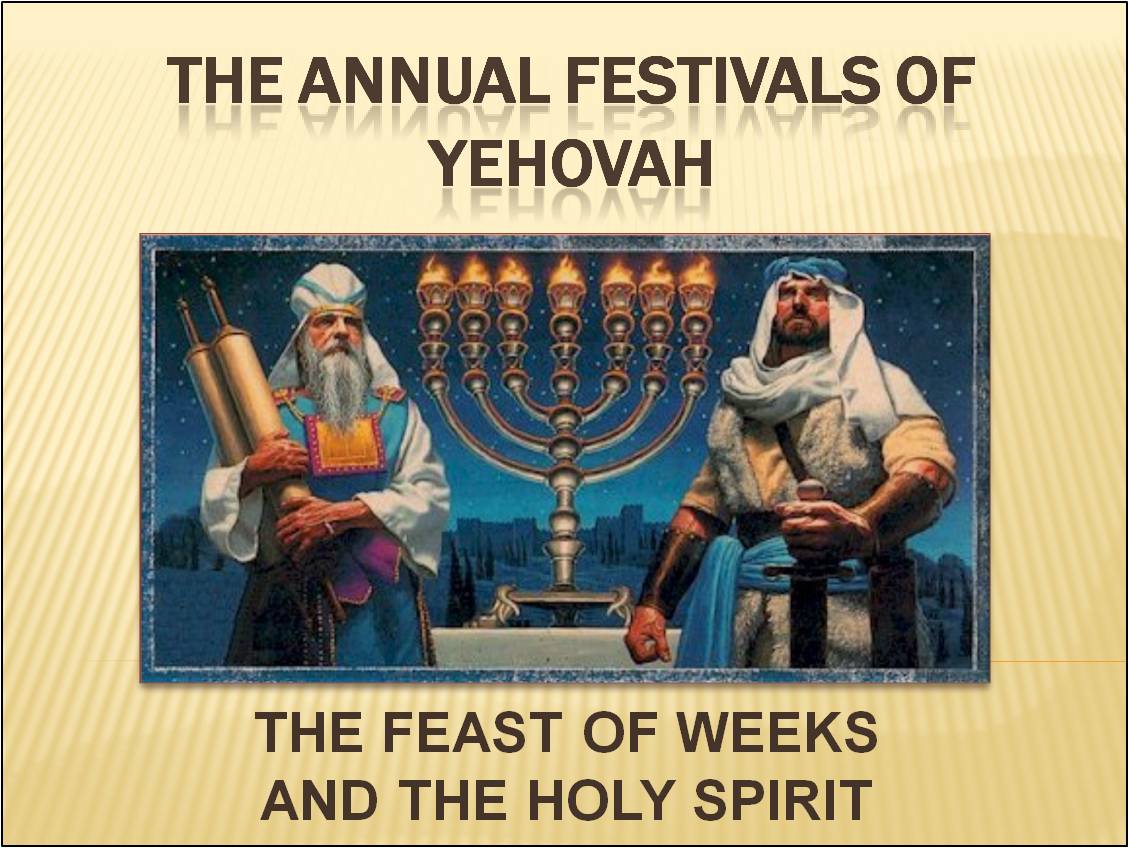 Biblically, names are very significant. They reflect character, meaning, and at times were prophetic in nature. Not only are names of people in the bible significant but so are the names of the Festivals. Three separate names were used by the Hebrew Scriptures for the fourth of the Feasts of the LORD. The most common Hebrew designation for this final feast of the spring cycle of biblical festivals was Hag Hashavuot, meaning “The Feast of Weeks.”

“Celebrate the Feast of Weeks with the firstfruits of the wheat harvest, and the Feast of Ingathering at the turn of the year (in the fall).” Exodus 34:22

Count off seven weeks from the time you begin to put the sickle to the standing grain. Then celebrate the Feast of Weeks to the LORD your God by giving a freewill offering in proportion to the blessings the Lord your God has given you. Deuteronomy 16:9-10

Shavuot was called the Feast of Weeks because seven weeks were counted from the Feast of Firstfruits (firstfruits of the barley harvest) until observing this celebration. The count began during the 1st month of the Hebrew ceremonial calendar (Nisan) on the day after the Sabbath of the Passover week. The count continued for seven weeks until the end of the first week of the 3rd month of the Hebrew ceremonial calendar (Sivan). The counting of these days is known as Counting the Omer (in Hebrew, S'firat Ha-Omer). An omer is a Hebrew dry measure (about 5.1 pints) which was an individual's assigned daily portion of manna.

THE DAY OF FIRST FRUITS

The primary meaning of this feast was reflected in the Hebrew name, Yom Habikkurim or “the Day of Firstfruits.”

" 'On the day of firstfruits, when you present to the Lord an offering of new grain during the Feast of Weeks, hold a sacred assembly and do no regular work.” Numbers 28:26

Shavuot was the day on which the firstfruit offerings of the summer wheat crop were brought into the Temple. Seven weeks prior to Shavuot, a sheaf of barley grain was presented as a wave offering for the Feast of Firstfruits. But on this Day of Firstfruits, two loaves baked with yeast from the first fruits of the wheat harvest are presented.

THE FEAST OF THE HARVEST

The third designation, Hag Hakatzir or “the Feast of the Harvest”, reflected the fact that this festival was the official beginning of the summer harvest season.

The four spring Festivals of the LORD: Passover, Unleavened Bread, Firstfruits and The Feast of Weeks all take place within the first three months of the Hebrew calendar. Then during the summer months there are no festivals. The fall cycle of biblical feasts do not occur until the seventh month (Tishri). The last three Festivals of the LORD: The Feast of Trumpets, The Day of Atonement and The Feast of Tabernacles all take place four months later during the seventh month.

THE WHEAT AND THE CHAFF

The people were waiting expectantly and were all wondering in their hearts if John might possibly be the Christ. John answered them all, "I baptize you with water. But one more powerful than I will come, the thongs of whose sandals I am not worthy to untie. He will baptize you with the Holy Spirit and with fire. His winnowing fork is in his hand to clear his threshing floor and to gather the wheat into his barn, but he will burn up the chaff with unquenchable fire.” Luke 3:15-17

The chaff represents the unrepentant sinner, while the wheat represents the church. His barn symbolizes heaven - the eternal abode of the believer. The chaff is burned by a fire which is never quenched - the Lake of Eternal Fire. This theme is repeated in many of the Kingdom Parables.

THE WOMAN AT THE WELL AND THE CHURCH AGE

Just then his disciples returned and were surprised to find him talking with a woman. But no one asked, "What do you want?" or "Why are you talking with her?" Then, leaving her water jar, the woman went back to the town and said to the people, "Come, see a man who told me everything I ever did. Could this be the Christ?" They came out of the town and made their way toward him. Meanwhile his disciples urged him, "Rabbi, eat something."

But he said to them, "I have food to eat that you know nothing about." Then his disciples said to each other, "Could someone have brought him food?”

*“My food,” said Jesus, “is to do the will of him who sent me and to finish his work. Do you not say, 'Four months more and then the harvest'? I tell you, open your eyes and look at the fields! They are ripe for harvest. Even now the reaper draws his wages, even now he harvests the crop for eternal life, so that the sower and the reaper may be glad together. Thus the saying 'One sows and another reaps' is true. I sent you to reap what you have not worked for. Others have done the hard work, and you have reaped the benefits of their labor.” John 4:27-41

The Samaritans were a mixed-blood race comprised of colonists that the Assyrians brought into the Northern Kingdom after the Ten Tribes were taken into exile. Some intermarried with the Israelites who were left behind. Jews considered them physically and spiritually inferior. When Jesus quoted the saying, “Four more months and then the harvest” He was using a natural phenomenon to reveal spiritual truth. The wheat harvest grew during the summer months to be harvested in the fall. It would take four months from the Feast of Weeks (The Day of Firstfruits of the wheat harvest) until the Final Ingathering (Feast of Tabernacles). The fields that were ripe for harvest, a harvest of souls, were despised Samaritans. He stayed with them for two days.

Christ residing amongst the Samaritans for two days is symbolic of the Church Age - 2,000 years of harvest amongst the Gentiles.

In the Greek language, Shavuot was known as Pentecost meaning “fiftieth,” since it was celebrated on the fiftieth day after the Feast of Firstfruits. Jesus arose on the first day of the week (a Sunday) which was the Feast of Firstfruits. By counting seven full weeks, the forty-ninth day is on a Saturday. Adding one more day, for a total of fifty days, the day of Pentecost is again a Sunday. Both resurrection day and Pentecost are on a day after the Sabbath. Sunday is not a New Testament Sabbath. Sunday is the Lord's Day. The Sabbath was the day of rest after the original creation. The creation was stained by sin and cursed by God. God has made us new creatures in Christ. God promises us a new heaven and a new earth. Sunday, the day after the Sabbath, spiritually is the 8th day. Eight is a number of super-abundance. The Lord's Day is a foreshadowing of the eternal Kingdom.

When the day of Pentecost came, they were all together in one place. Suddenly a sound like the blowing of a violent wind came from heaven and filled the whole house where they were sitting. They saw what seemed to be tongues of fire that separated and came to rest on each of them. All of them were filled with the Holy Spirit and began to speak in other tongues as the Spirit enabled them.

Now there were staying in Jerusalem God-fearing Jews from every nation under heaven. When they heard this sound, a crowd came together in bewilderment, because each one heard their own language being spoken. Acts 2:1-6

As a Jewish believer in Yeshua (Jesus) as the Son of God and Messiah (Christ), I am sharing my understanding of the natural and spiritual fulfillments that are foreshadowed in the Festivals of Yehovah in a series of posts. If you missed any of my first six posts, please use the links below:

WHY SHOULD CHRISTIANS STUDY THE FESTIVALS OF THE LORD?
https://steemit.com/christianity/@lastdays/why-should-christians-study-the-festivals-of-the-lord

JESUS IS THE PASSOVER LAMB WITHOUT BLEMISH
https://steemit.com/christianity/@lastdays/jesus-is-the-passover-lamb-without-blemish

SYMBOLS OF CHRIST IN THE PASSOVER
https://steemit.com/christianity/@lastdays/symbols-of-christ-in-the-passover

SANCTIFICATION OF THE BELIEVER IN CHRIST
https://steemit.com/christianity/@lastdays/sanctification-of-the-believer-in-christ

HOW WAS JESUS ABLE TO CELEBRATE PASSOVER AND YET BE CRUCIFIED ON PASSOVER?
https://steemit.com/christianity/@lastdays/how-was-jesus-able-to-celebrate-passover-and-yet-be-crucified-on-passover

CHRIST WAS CRUCIFIED, ENTOMBED, AND ROSE FROM THE GRAVE ON THE FESTIVALS OF YEHOVAH
https://steemit.com/christianity/@lastdays/christ-was-crucified-entombed-and-rose-from-the-grave-on-the-festivals-of-yehovah

Noted. Thanks for sharing