The LORD Jesus Christ, Who is He? by Scott Price The Eternal Son of God, the second Person of the Trinity, came to fulfill the Covenant of Grace by descending down from His Heavenly throne to take on sinless human flesh and nature in His Holy Incarnation, the Word made flesh.

He was born of a woman, born under the Law, to keep it, fulfill it, magnify it and make it honorable. He obeyed perfectly in every jot and tittle with His perfect deeds, words, thoughts, motives and a perfect will. He always pleases His Father.

He did all this, not as a private Person, but as a Representative and Substitute of the Elect who were chosen in Christ from the foundation of the world. 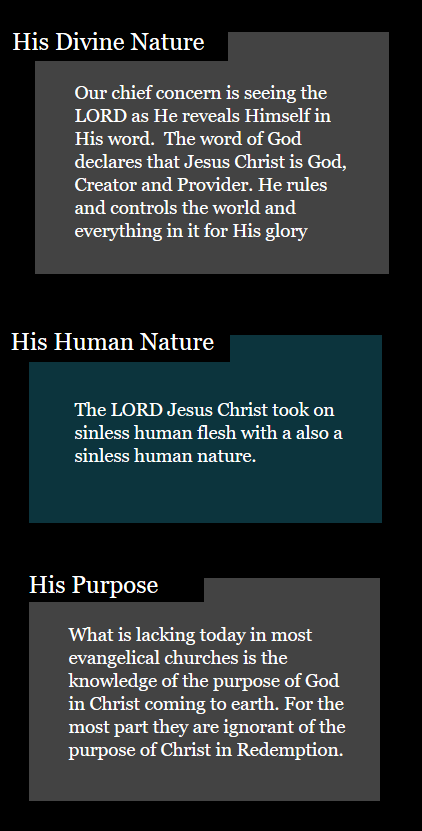 He went to the cross of Calvary to take on sin by through the means of imputation. God the Father put the sin of the elect to the account of Christ and the Lord Jesus Christ became legally responsible and guilty for their sin. He took the punishment for the penalty of their sin until He fully satisfied God's Law and justice through the poured out wrath of God unmixed with mercy.

When He did all His Father required in punishment the He cried with a loud voice; "It is finished". He bowed His head and laid down His life in death as a complete and final sacrifice to His Father.

He was buried in a borrowed tomb and He raised from the dead on the third day as prophesied in the Scripture. Later, He ascended and was exalted to the highest position anywhere then, now and forever in this world or the world to come. He reigns victorious by virtue of His accomplished Redemption and His defeat of death, crushing the head of the Serpent as promised in Gen 3:15. He now lives to still do His work as the Great High Priest, praying for all His people, the elect.

The Lord Jesus Christ, the eternal Son of God, the God-Man Redeemer came and accomplished a work of complete satisfaction for God's elect. The articles below explore the various facets of the Person and work of Christ:

The Lord Jesus Christ is most precious to a believer. He is the Glorious One, the Preeminent One, the God-Man Mediator, the Author and Finisher of the faith of God's elect, well deserving of worship.

The Person of Christ by John Dagg

The Person of Christ by B.B. Warfield

The Person Of Christ by Joseph Orton

The Mediatorial Union by Arthur Pink

The Logos by Gordon H. Clark

God & Man in One Person, Our Savior by Theodore Beza

The Self-Existence of Jesus Christ
by William Romaine

Glorious Mystery of the Person of Christ by John Owen

The Incarnation by Joseph Irons

God Manifest In The Flesh by Caleb Sawyer

The Savior's Fashion by Joseph Irons

The Suretiship of Christ Opened by Benjamin Keach

The Incarnation of Christ by John Gill

The Humiliation of Christ by John Gill

Christ In All Points Tempted by William Parks

A Pure Offering by John Booth

The Sinless Savior by Joseph Irons

The Holy Sufferer by Joseph Irons

The Father Well Pleased In Christ by J. K. Popham

The Glory of Christ by John Owen

The Fountain of Life, Christ in His Essential and Mediatorial Glory by John Flavel

The Christ of Arminianism by Steven Houck

Thanks for sharing... Love it. SteemThat.com Is So Awesome Please Upvote This Comment To Help Me Verify More Quality Posts.

This post has received a 4.26 % upvote from @nettybot thanks to: @steemthat.

This post has received a Bellyrub and 2.40 % upvote from @bellyrub thanks to: @steemthat. Send SBD to @bellyrub with a post link in the memo field to bid on the next vote, every 2.4 hours. Be sure to vote for my Pops, @zeartul, as Steem Witness Hope you enjoyed your bellyrub!