I hadn’t really planned on doing a post today but it’s Caturday so I’m going to tell a story (yep, another one) about those silly cats outside. I think they must really love me and I’ll tell you why. I’ve been feeding them, petting them and providing shelter for awhile. They are out there almost every day and I think no matter what shelter that is made for them, they prefer the cushions on the porch chairs the most. Last year I had a friend over and was feeding them when my friend remarked that “if you stop feeding them they will stop coming around” and “they are only hanging around because you are feeding them and they’re hungry”. Okay, first off, I’m not going to stop feeding them and they shouldn’t be “that” hungry as I feed them a couple times a day..at least. It did though make me think back to last summer and even this morning.

A photo of Sylvester/Sylvia aka Syl when she was younger. 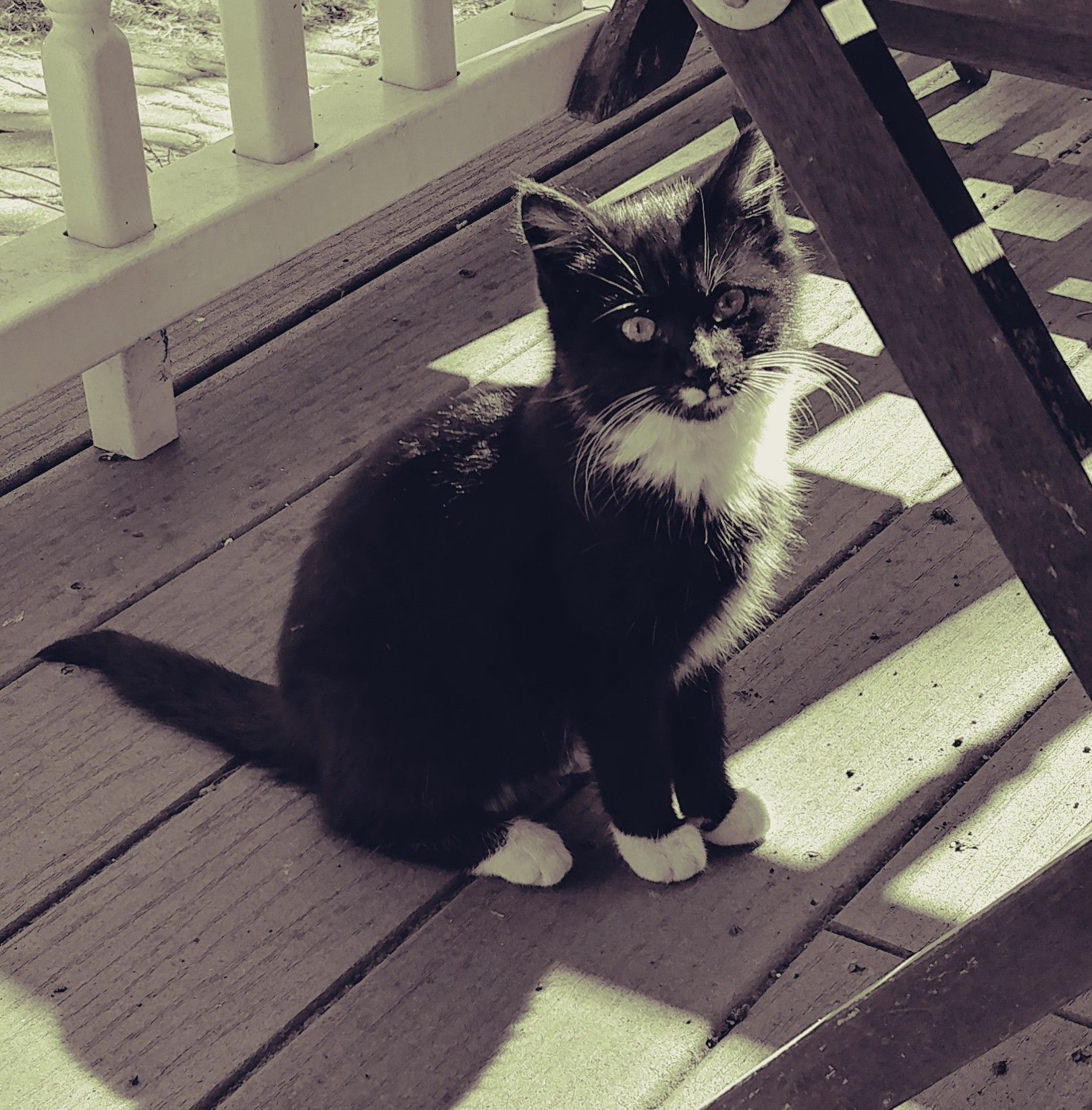 Last summer it seemed I could hardly leave the house to go for a walk without these silly cats following me. At the time, my daughter was living up the street and occasionally I would have to walk up and feed her animals when she was not in town. No problem, except for these cats! They wanted to follow me everywhere I went when I was outside. I used to have to sneak out after they went around the back of the house to explore and play. I also used to feed them and then leave while they were eating but they would, actually, leave their food to follow me. Sometimes I would have to turn around because they followed almost all the way to the other house. I just didn’t want them to wander so far from home so I would walk them back to my house. They had me trained pretty well! 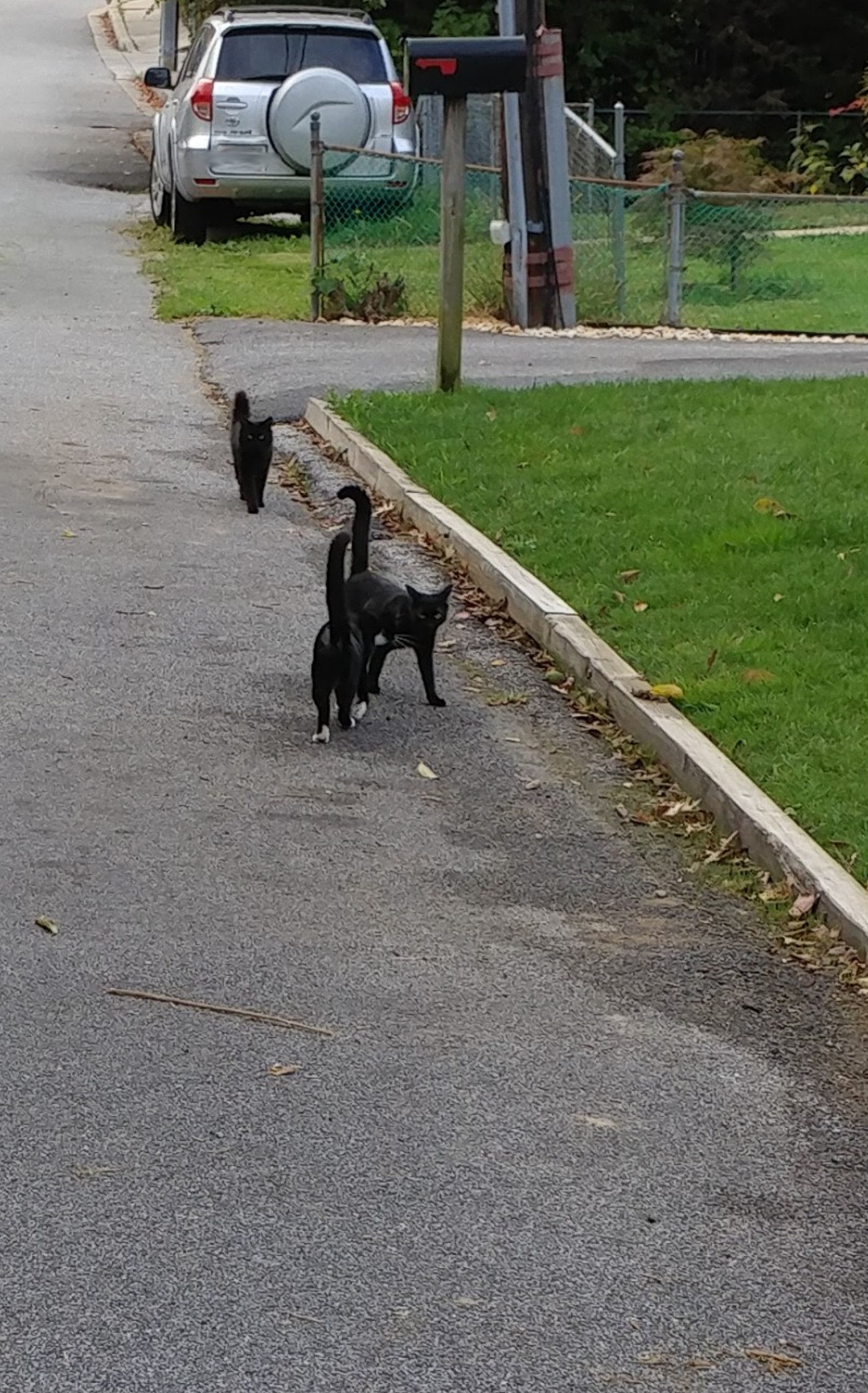 This morning I fed them and decided to take a couple photos of the sky. I turned around and practically fell over Fluff and Syl wasn’t far behind her. Baby decided to keep eating. Anyway, there wasn’t much special with the sky this morning so I went to walk back up the walk way and those kitties walked ahead of me. When I stopped, they stopped. I stopped a few times and they would just stop also and wait for me or Fluff would come back as if to say “come on, we’re waiting for you”. It just made me laugh and think of what the friend said last summer. While it may be true to some extent, they did and do leave quite a pile of food to follow me around many times. 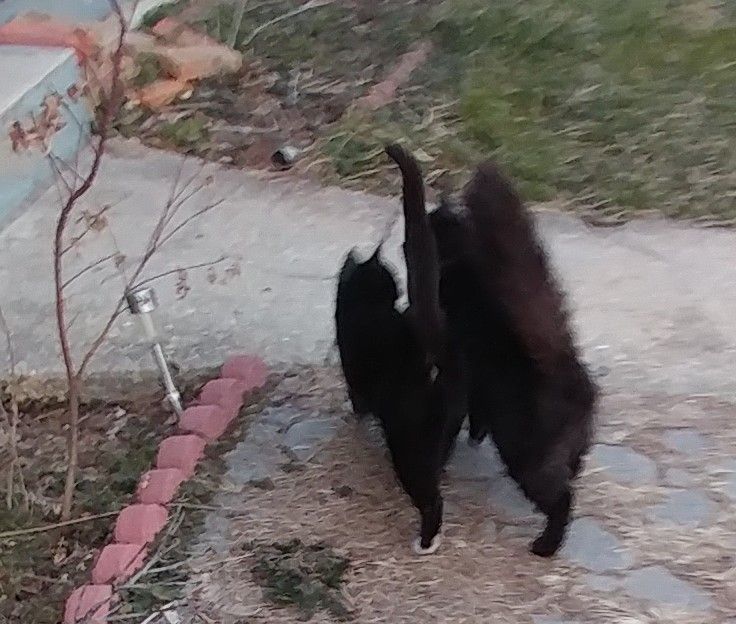 So there you have it! These cats plain and simple love me and I love them too. I’m not gonna stop feeding them and giving them love either. I would let someone take them if they would give them a forever home. I just can’t take anymore cats inside my home but I wish they could have that. My daughter and I have found so many homes for cats and kittens around here that we’ve run out of friends to take any more. I’m not giving up on it though but till then they will always have a place here!

One last photo of goofy Baby! It was taken at night and she was moving around and it came out looking funny! 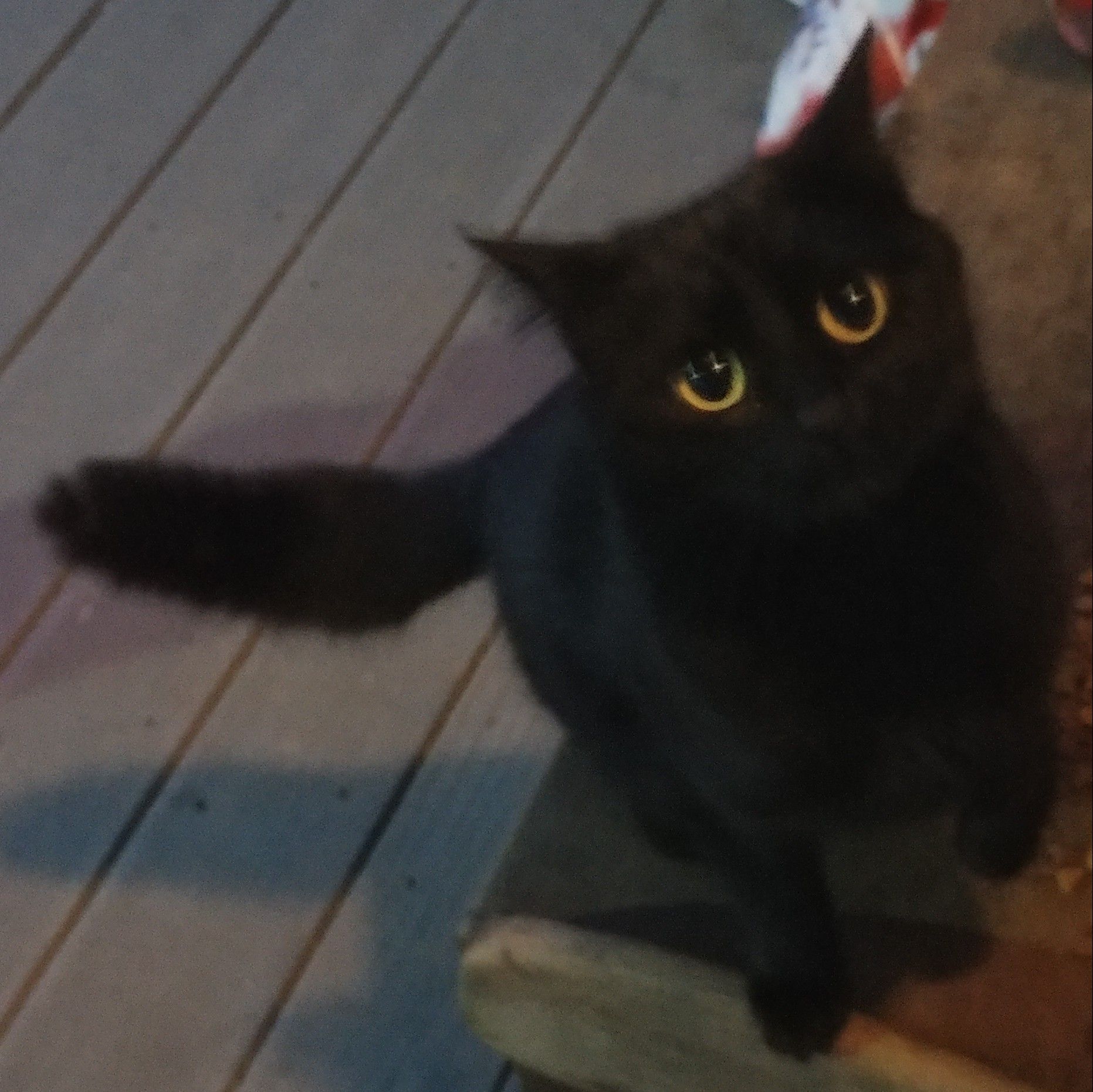 Thank you @dswigle for #caturday!

You have earned 5.45 XP for sharing your photo!

And have also received a 0.18 percent upvote.

Congratz, your post has been resteemed and, who knows, will maybe appear in the next edition of the #dailyspotlights (Click on my face if you want to know more about me...)
$0.00
1 vote
Reply
[-]
deerjay (67) 3 years ago

That's a beautiful story @deerjay, and some lovely felines you are forming a bond with!

I was just talking to someone else about cats and humans, and how (when there is the freedom to do so) the "adoption" between humans and cats is really a two-way street. Whenever you meet someone who has a cat that follows them around like a dog it almost always because the cat adopted the human as much as the human adopted the cat.

Thank you @curatorcat!! I've felt like that as well. It is something to see a cat play fetch as well. Not all cats will but we've had several that did and do. When people see it they ask how we trained our cat to do that and we tell them we didn't, the cat trained us..lol!! ;)

They are so adorable! I love how they follow you around. 😻

Thank you @danaedwards!! Fluffers is the ring leader of the bunch..lol!!

Fluffers is such a great name. I love it!

You are doing a really good thing. Once you decide to feed a stray animal you can't stop. It would be too cruel. You have a big heart and are rewarded by these cats with their love for you. In their eyes you are there provider, their new mother.

Thank you Mike! They are loving little souls and brighten my day! xoxo

What a great story @deerjay. it is wonderful how you take care of the beautiful little fur people and how they love you. Don’t ever let anyone put down your generous heart, dear friend.

hee hee. cats are amazing creatures. I imagine how you walk down the street with them :)))) it's great !!!!

Thanks @tali72!! It was quite the sight and I couldn't help but laugh a little myself at that little cat troupe following behind me!

Thank you @crystalize!! Hope you had a Happy Caturday and a beautiful weekend!!

In Siam, the cat was so revered that one rode in a chariot at the head of a parade celebrating the new king.

What an awesome caturday post!! They are so cute! Good job taking care of them! I like Fluffers the most! He reminds me of a cat I used to know named Gomez. :)

Thank you @snowpea!! She is a sweetheart of a cat and is always at my heels when I'm outside!

Aww.. I love this caturday post 😊 amazing pictures and such cute kittys 🐱🐱🤗
No wonder they love you as you care so much for them. Thank you for sharing. Happy weekend. Cheers!

Thank you @saffisara!! I think they know I'm a sucker for cuteness..lol. Wishing you a wonderful weekend as well!!

My pleasure my friend!
I think you are right and your not the only one... Lol cuteness is just hard to resist and I would totally cave 😁 lol
Happy Sunday! 🤗

It is funny how animals train us. lol

I don't blame you for seeing they are loved and taken care of. I've not seen any strays around here and we have been here for a long time.

Unless you count that squirrel from last summer. He lived in our tree for sure. lol

Lol..that squirrel!! Thank you Deb!! We've always had strays since we've been here. We rescued quite a few. Most won't let anyone get too close but some will with time. All of our inside cats have been rescues. Hubby loves cats but his allergies have gotten much worse over the years. These three will probably be the last that can be adopted out if we can find them homes. I remain hopeful! 😊

I wish my General could walk around and enjoy freedom at one point but its pretty unlikely for a deaf cat to make it in the cruel reality we call world:) Cuddle them for me!

Thank you @kid4life!! I just recently found that out about white cats from @manorvillemike. General is gorgeous btw but you probably hear that all the time! I will give extra cuddles for you and give General some from me!! ❤

aw that's so nice what you're doing for them!! I understand why they followed you around haha. Goofy Baby looks so cute with the big eyes haha <3

They know a good person to follow :-) and they know who loves them too!

Thank you @icybc! They got me wrapped around their little paws..that's for sure! ;)

They are many cats I'm glad you feed them, meow!