Our Nature, Our Future The development of modern times as it is today, painting is a workart that its beauty is enjoyed through visual. Artwork can give an impression / meaning alone to the community and the creators themselves. It's because of painting contains the value of communication to express the thoughts and feelings of the creator to society about the environment in which the art was created.
The desire of the creator to express ideas, imaginations, and emotions, is highly dependent of trends of interest and interest in responding to situations, events and eventsin life in the environment where the creator lives.

Various creator phenomena witness in life, one of which is impact human relationships with nature that are supposed to be in harmony and harmony. It is also within the teachings of Hinduism.In the teachings of the Hindu religion mentioned that there are three causes the happiness of Tri Hita Karana.
Tri Hita Karana comes from the word tri means three, hita meaning happiness and karana means cause. The three causes of happiness should beharmonious relation so as to create happiness. The three relationships are,
parhyangan: human relationship with Sang Hyang Widhi (God Almighty),
palemahan: human relationships with the environment (universe). The example is mecaru ceremony that aims to clean nature so that it becomes harmonious.
It is realized by Hindus that every moment we take the contents of nature. To help survival in the world. This nature is God's creation, taking without return is a sin and it could have an effect to destroy it. For that Hindu people to implement yadnya like mecaru as a symbol for human always preserving the universe.
Pawongan: human relationships with other humans or society. In the teachings of Tri Hita Karana there mentioned the relationship between man and the environment in which every living being must adapt itself to the environment.As well as human, because humans will not be able to live without the environment. Human life requires needs such as food, drink, housing,
clothing and so on. These needs are taken and processed from nature. From growing,
animals, soil, rock, water and so on. If the plants live with fertile then the animal will also live and breed well too. Both are plants and animals/animals is a basic requirement for humans.

Therefore, human beings are obliged to maintain their environment well to grow and sustain. The harmony of the relationship between humans with its environment is very important for human life itself. Relationship the harmony between man and environment causes happiness. The theme that the creator of 'lift' where the impact of human reciprocal relationship withvnature that must be balanced in order to create a harmonious life between humans with nature of the environment, but the fact that the creator sees very apprehensive where
the mutual relationship of man with nature is not balanced anymore. Damage the environment is caused by two things that is by man and by nature itself. Damage by
humans such as illegal logging, pollution and so forth. Damage by nature itself such as volcano eruption, earthquake, storm and others. Damaged environments will harm humans and other creatures. The current forest destruction removes deep forest functions life. Forest is a unity of ecosystem in the form of expanse of land containing source natural biodiversity dominated by natural environment trees, known forests
have abundant wealth, so from that everyone wants to master and enjoy the results of such nature.

Forest is a place of plant/tree in eco-system. In the forest there are various
the type of plant in which large trees contain chlorophyll / green leaf substances which can produce Co2 for photosynthesis. When plants photosynthesize then available food reserves will be distributed to other plant stems. Plant also has an important role in the relationship of plants with such microorganisms bacterial decomposers associated with plants when decomposed/ recycled. Vegetation also keeps the soil from eroding rain and helps cool the climate
by evaporation of water into the air through the respiratory process. According to the data that the authors get, the natural forest of Indonesia is shrinking with the speed is very worrying. To date, Indonesia has lost its forests the original was 72 percent. Indonesia's logging uncontrolled for decades, causing rainforest shrinkage tropical on a large scale. Humans as perpetrators of forest destruction of the most, where often illegal logging, and building buildings and factories, factories that under construction do not care about forest sustainability. Besides that, Another cause of forest destruction is wildfire caused by the presence carelessness in throwing cigarette butts indiscriminately, no turning out fires during a camping activity in the forest, intentional acts such as the expansion of agricultural land by opening new land using fire that fatal, ie the burning of the forest will be widespread and causing
increased smoke or air pollution. The impact of forest fires is emissions of carbon dioxide into the atmosphere, the killing of wildlife, the loss of plant species. Forest destruction on an ongoing basis without any attempt to reforest will very bad for nature. For example the impact of forest damage is the soil landslides, fires, floods, droughts, deforested forests. Lack of forest control and illegal loggers will add to the impact of increasingly uncontrolled let alone sanctions
which is given is not worth what he did. As a human being, a being God's most perfect creation should think positively, what goes on then the day and how also with the impact caused by the damage the forest will have a negative impact on the next generation. Industrial waste disposal often contaminates rivers and seas. Fish can not stand it living in polluted rivers and seas. In addition, humans become difficult to get a drink which is fresh. Therefore, industrial waste should be very careful. The exiles
wherever possible should be neutralized first before being discharged into the sea or to the river. The exhaust of industry, mining and exhaust fumes from vehicles is over whelming pollute the air. The smoke produced from carbon dioxide, carbon monoxide, sulfur dioxide and the like. Carbon dioxide results in air sultry and rising earth surface temperatures. Carbon monoxide is highly toxic, can be deadly
human. Sulfur dioxide causes the air to be chromatic, which is very destructive metal, for example: rust on steel and iron. With such a background above it gives rise to the creator's imagination to raised the theme of an event about "The Impact of Human Relations with the Environment Nature "as a source of inspiration in the work of painting. The natural conditions are still beautiful as in the mountains and hills where natural and human harmony is so felt, a fascination for
expressed in creation. On the other hand the author also feels sorry for the damage
nature caused by human activity, the creator gets the idea to pour into in canvas media, with creation combined with elements of art
including composition, center of attention, proportion, rhythm, and balance. With
combine the entire element, will produce a work of painting which is interesting, qualified, and has its own meaning.

Congratulations you have been upvoted and resteemed as part of #newbieresteemday's top 10 posts for the day! We invite you to use our tag to connect with more of our members. To learn more: Come Join Us!!! (Newbie Resteem Initiative) 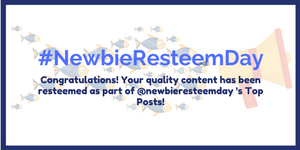 Please reach out to me on one of my posts if I can help in any way.