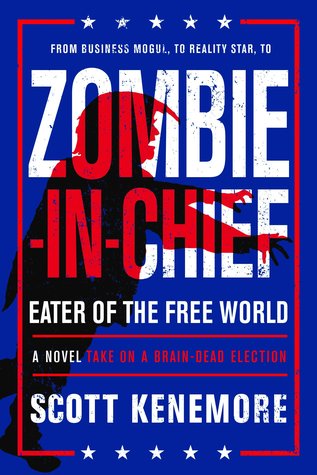 It took me an embarrassingly long time to finish this book because life kept getting in the way. It's irritating, because Scott Kenemore is one of those writers who deserves your complete attention when it comes to his fiction, and here I was having to keep putting the darn thing down when all I wanted was to plow through, start to finish, and revel in the carnage.

One of the best things about Kenemore's zombie fiction that divides it from many of the other stories concerning the brain-driven blue-collar monsters is it's lack of focus on zombies. That isn't to say the zeds don't figure into the story at all, because they do, but Kenemore's always keen to keep the attention on his human protagonists while the shamblers do their thing mostly off-screen. So while the key player in Zombie-in-Chief is a billionaire business mogul attempting to secure his party's nomination, the story's much less about him than it is about the journalists who uncover a massive conspiracy surrounding this tycoon that has the potential to ruin his candidacy in the run-up to the convention: the Tycoon is a member of the walking dead, and not even his running mate knows it.

Jessica Smith and Tim Fife, however, get swept up in the conspiracy as a group calling themselves the Knights of Romero prepare to do whatever battle is necessary to prevent a zombie from coming anywhere close to the presidency of the United States. Smith and Fife aren't exactly friends (they were classmates in Journalism school before Fife dropped out), and they aren't exactly enemies although they work for rival news outlets (she for a major metropolitan newspaper, he for an online 'alternative facts' website run by a man known for hawking nutritional supplements of dubious quality). Nevertheless, they find themselves thrust together at the convention thanks to a story neither one could even dream of publishing without enough evidence to stave off an onslaught of legal assaults, much less the editorial censorship of their immediate supervisors, who would easily revoke their credentials if they fielded such a wild accusation. Smith and Fife become a modern-day Woodward & Bernstein team but without a Deep Throat of their own. It's a great sort of "alternative facts" take on a tired old horror trope.

I mean "alternative facts" in the nicest way possible, because Kenemore's zombies aren't your dad's fumbling, stumbling corpses, fresh from the grave and "coming for you, Barbara". Perhaps the book's most significant passage is the explanation for why this is the case. It's something Romero himself was working towards starting with "Day of the Dead" and continuing on in "Land of the Dead": zombies have evolved in much the same way bacteria have to counteract antibiotics. The more intelligence one retains, the more human one looks and the longer one can maintain that masquerade, the less likely it is that zombie will automatically wind up in the crosshairs of a trigger-happy hunter. By the time the Tycoon was infected, being a zombie is no longer the, if you'll excuse the pun, death sentence it was in the past.

Watching him explain how a secret cabal of the un-living have taken great pains to ensure the rest of the world never learns their kind are among them is both enjoyably new and amusing at the same time. Transplanting this into an alternate reality 2016 presidential campaign is the sort of dangerous story idea that could easily tank if not handled correctly. Primary Colors meets Night of the Living Dead isn't the sort of thing just anybody could pull off, but Scott manages this roman à clef perfectly.

That's important, because writing a novel about politics without getting political is tricky. Obviously Kenemore changes names when he uses them at all (the titular Zombie-in-Chief, for instance, is never identified by any moniker other than 'the Tycoon', while his running mate is always 'the candidate from Indiana' or some other appellation -- yes, we know very well he's talking about Trump and Pence, but there's no need to state the obvious), so half the fun of a book like this is putting two and two together and realizing, "Oh, that's who he means!" TruthTeller, the blog/alternative news source serving as Tim Fife's employer, is obviously meant to poke fun at one particular real-life analog, but could also be an amalgamation of other varied online outlets with the serial numbers filed off, and it doesn't make a bit of difference to the story. One of the most important things when it comes to political fiction, at least in my mind, is that by the end of the book I shouldn't be able to tell the author's affiliation one way or another, and while it may seem like a very left-wing course of action to paint an "obvious Trump is obvious" spoof as a brain-eating asshole, Scott takes swings at the left as well, including one glorious twist near the end with regards to the opposition candidate that made me laugh out loud which I will not spoil here. Ultimately, Scott's message isn't aimed at Donald Trump, Hillary Clinton, or any politician, really...it's aimed at we the people, the ones responsible for electing those who represent us and guide the development (and sometimes regression) of our nation. The end result feels like an exasperated sigh from an author who knows we need to do better, but understands that isn't always possible. Of course, I'm writing this review here in 2017 directly after a presidential election...it's hard to say how well this will work for readers in the future who didn't live through these times, but that's the risk one takes when writing a timely political piece. Just as Primary Colors couldn't have been published much later than 1996, I don't see how Zombie-in-Chief could be published much later than 2017, with the Republican Convention still so recent in memory, and the Trump presidency still in its relative infancy.

So clearly I enjoyed Zombie-in-Chief...why not 5 stars? Well, mainly because it needed one last editorial pass before going to print. The most egregious error takes place in the last fourth of the book when main character Jessica is suddenly called "Jennifer" several times. This caused some confusion, and made me skip back a page or two just to make sure a new side-character hadn't been brought in without me noticing, but it seems to be a simple case of autocorrect gone wrong. There are a couple of other minor mistakes throughout (a missing word here, a slight misspelling there), but I myself am both a writer and an editor and cannot turn my internal spell-checker on and off at will; these stuck out for me where a more casual reader would gloss over them without so much as a second thought.

Also, while this is only my opinion, I felt the book ended a little too prematurely. While there's plenty of mayhem and mischief in the book's 261 pages, the final chapter (or section, if you prefer, since the book isn't broken down into chapters) zips by in the last few pages with a rapid-fire information dump on the fate of one of the primary protagonists as well as what's going on in the country now that the undead have literally assumed command. I'd have loved some more time spent showing us the results of the slow policy roll-outs instead of the Wikipedia-style capsulized summaries the reader receives instead. If this was deadline-related or the publisher had a specific page count they were looking to hit, I totally understand, but it's still the only real disappointment in a story that, up until the last few pages, really cracks with life and wit.

But no matter. Kenemore delivered exactly what I had hoped and expected from him, given my experience with his past material. I'd recommend this one to political junkies above all, because half the fun is playing spot-the-reference with the different characters, but even if you're just looking for a new taste of zombie fiction that doesn't bludgeon you over the head with skull-cracking carnage to get across its point, Zombie-in-Chief: Eater of the Free World is worth your time. It's bloody without going over-the-top. It's funny without pretension. It's political without getting political. Most of all, I could tell Kenemore had fun writing it, and at the end of the day, anything a writer has that much fun writing is probably worth picking up.

Four shambling corpses out of five.

In the interest of disclosure, I received a complimentary copy of this book from the author in exchange for a review.