Yesterday I had the privilege of finally holding my baby in my hands for the first time... it was a weird feeling. Something I had looked forward to for so long. And I kind of expected the world to stop spinning, people to stop talking about their daily woes, and to share in my happiness... 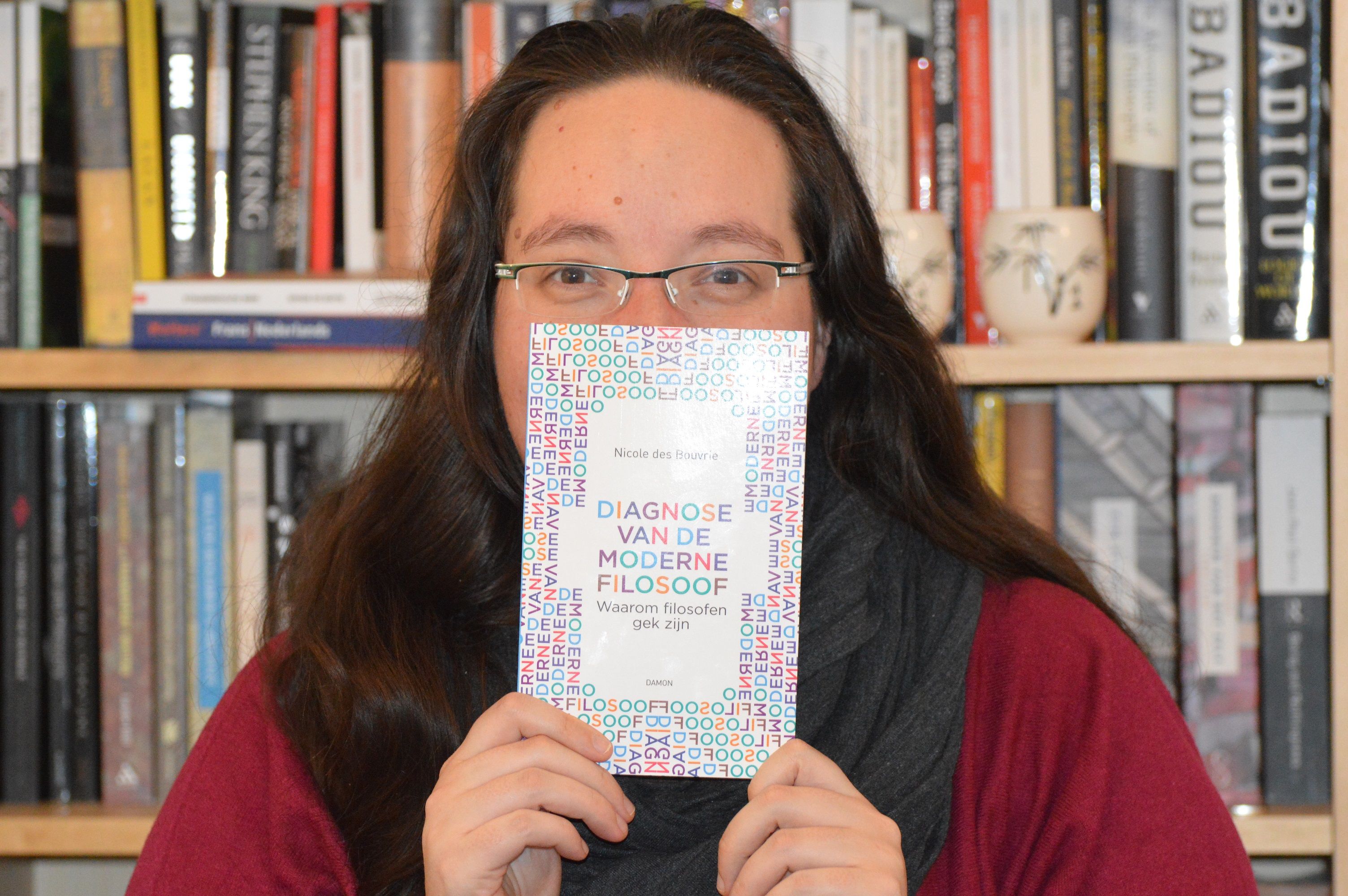 Happy me, with 'Diagnosis of the Contemporary Philosopher - Why Philosophers Are Mad',
published March 2018 by Damon, a Dutch publisher of philosophy books.

It is a book written in Dutch, so it's weird writing about it in English (read my Dutch update on my own blog). But I still wanted to share my happiness about it with the larger Steem-community. (And I already pestered the Dutch people here with it before... asking who would like to write a review about the book for instance...)

"Diagnosing the Contemporary Philosopher": a book about philosophy & psychiatry

Philosophy influences the way you live your life. Philosophy or thinking is not something you only do at work and then forget about it, it makes you take a specific attitude towards life and the world around you. This makes philosophy dangerous, when you consider how it affects your daily life and the way you interact with the people around you. Especially if you consider philosophy to be a way to break free from 'norms' and to go beyond the limits of what is possible.

In the book I use the DSM-5, the diagnostic manual for mental disorders as published by the American Psychiatric Association to diagnose philosophy. The DSM-5 is used all around the world to classify and diagnose behaviour, and as such it is a way in which reality is created--funding, treatment, recognition is all dependent on fitting into the classification of the DSM.

How this book came about

I started writing this book in May 2016. There was a contest organised by a Dutch association for philosophy and psychiatry that had some nice prize money attached, and when this idea for a book struck me, I thought, I should just write it and send it in. Who knows what might happen. As I had the idea all ready, and the audience picked (two things that actually take a lot of time, and I generally don't start writing before I have those two things clear), I decided to just give it a try.

So I sat down for about a month, and I wrote it. I mean full-time writing for a month. I had to finish it, because I would be moving to China and the US after that, so I only had that one month. And without giving it a lot of extra thoughts after I had finished writing it, I sent it in. And then I forgot about it again.

Then in the beginning of 2017 I got an email from the secretary of the jury. That my book had ALMOST won. After all the rejections I was used to get for other work, this was actually the first rejection that made me happy. They apparently really liked this, maybe it wasn't just a big joke after all. They loved the creative approach, the clarity, the tone of voice. And if they could have given a prize for the most creative work, it would have definitely won.

This made me go back to the manuscript and when I read it again, I was almost impressed. Did I write this? I decided to go look for a publisher. This is not an easy thing, but fortunately I know the Dutch market a little bit, having read & reviewed a lot of philosophy books before. There were some obvious places to send it to, and I thought about where I would really like it to be published. Where would this book find good friends to stand next to in the book case? And I decided to send it to Damon. A small, independent book publisher that has been around for years, and continues to bring high quality philosophy & theology book on the Dutch market.

So I wrote a book proposal for it, outlining the goal and its main features. And I sent it in to Damon, I decided to also start translating the book into English. I am used to write things in English, and this book was my first try to see if I could also write in Dutch. And I waited for Damon to get back to me.

And they got back to me quite soon. I went for a meeting, and it turned out they really liked it... And here we are now, another year later. I added a couple of chapters. I edited it several times, had people read it and comment and reworked it.

And now the book is born (and sold through here), and a new and exciting phase emerges... People actually (possibly) reading it! And (possibly) having opinions about it! Next step: Finishing the edits on the English translation, having people read through it for feedback, and finding an English Publisher. If anyone has any recommendations, please let me know!

Here is an overview of more fiction/short stories and poetry by @nobyeni.
#publishing #writing #philosophy #psychology
2 years ago in #book by nobyeni (59)
$4.41
34 votes
Reply 22
Sort:
[-]
steemedchitty (56) 2 years ago

Wow! I'm so happy for you. I'll humor you; I'll stop talking about my daily woes and share in your happiness. I'm gonna have to save a bit for when it does come out in English!

I think I mentioned it when I first heard about the book, I think at TWB discord, that I'm fascinated by the idea, as it brings together two areas of knowledge I love--psychology and philosophy.

I've actually started considering the effects philosophy has had on my own mind lately. If I had to put it some way, my mind has definitely been poisoned by it (not that I mind one bit). I definitely wouldn't be the same had I not ruminated about the thoughts of Plato, or sat down to think, think and rethink over and over certain aspects of life. (And if I hadn't read The Fountainhead, I could very well be an entirely different person.)

In any case: CONGRATS! May you write many more, oh Resident Philosopher.

Thanks Chitty! I'm glad you commented, and I'm looking forward on our ongoing discussion about this book in the near future! Looking very much forward to your feedback to the English version, once I finally finish editing it into a respectable shape!

Will be reading your book once that is possible (This morning still only on pre-order). Amazing accomplishment to be published, to be sure! Well done, very proud of you, fellow Steemian.
I like how you call a diagnosis a (commercialised) judgement and not an obstinate truth.
It has come to my attention for many a year, already, that philosophy is slowly crawling towards psychology - mainly to stand a better chance at making its appearance in the media. The latter, in turn, scrambles arrogantly away from this again, loathe for a collaboration. Perhaps, your book may help to amalgamate both modern modes of exploring phenomena. (As long as you don’t end up as the over-simplifying Alain de Botton - not all non-philosophers are ninnies!)
This said from a philosopher by approach not learning - and a great believer in subjective perception as and when it is linked to our common wisdom-mind.

Appreciated. And yes, it's also a good guideline for me, to not become Alain de Botton, mainly because I don't find his books compelling and interesting enough to read them myself. But I do agree with you, that philosophy is to open its doors and to invite people in more, and the step towards psychology... hmm, I think philosophy has always been about what it means to be human, just that some schools have pretended that is not an interesting question. I'm very interested to hear what you will think of the book!

That feeling of going back to a piece and feeling the "Did I really write this?" is so real! What a transcendental feeling!

I've actually wondered more than a few times if this phenomena inspired so many attributions to divine inspiration in religious texts and works of art - where does it stem from? are we truly such beings of doubt that when confronted with the best we have to offer we shy from accepting it as our own?

Thoughts for another, less joyous time - and apologies for the break in celebration ^_^

This is so special, @nobyeni, couldn't be more happy for you to not only know that this writing is not just a product of your mind, but also now a physical copy of your best!!

Nice thought about divine inspiration. Reminds me of the Bicameral Mind theory that says our early ancestors heard their own thoughts as the voice of some godly guide to life. Back then, we surely were less doubtful than today. Even Socrates used to say an entity followed him around giving him advice about life!

Gave him advice about life, and was used as testimony on why his life should be taken away from him - maybe he needed another Dæmon for his other shoulder to tell him he should let his friends bribe the judges. =-)p

Do you think Plato looked over his Socrates and saw the words of his teacher springing from his pen rather than his own?

Meanwhile and somewhat unrelated but for relative era, how did we not preserve a single full song from Sappho?! Dæmons forgive us, we know not what we do.

Congratulations! It must be awesome to have a book of your own. I just had my writing published in magazines and it was already great! I am following you now too. Greetings from Germany.

Thank you @sumsum! You're right, it's a great feeling... and scary at the same time...

Congratulations, Noby! Wishing you much success with your book.

Thank you Anike! Much appreciated, and I also wish a lot of success to the book...

Congratulations on having your book published!（＾∀＾）

Thanks dj! It was worth the three years of hard labor... Now on to the next book to go through all stages of denial & rejection once more....

Congratulations bro. Book is the world window. All people can not write without reading