Reaching a milestone is always pleasant, but I can't help but wonder how valuable a thousand followers actually are. But first let me thank you all! 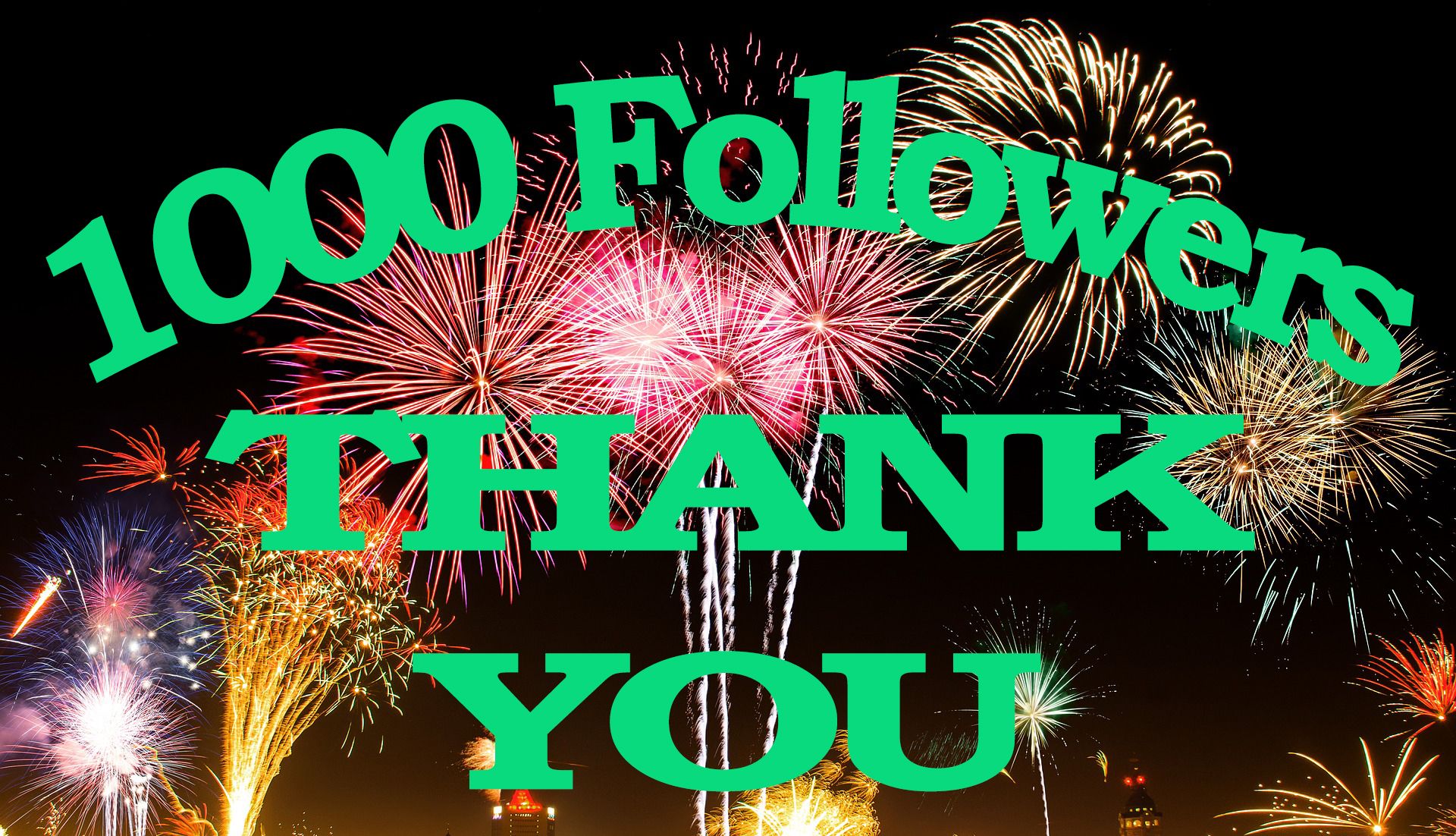 I really appreciate the fact that I got to this milestone and it was a real honor and a real pleasure to be here. I came here in May 2017 with very low expectations and a lot of curiosity, but the Steem blockchain has become an important part of my life. I'm really thankful to have met a ton of interesting people, to have made a ton of new friends and to finally feel like being a part of an online community is worth the time and effort - that's a feeling I had forgotten a long time ago.

I couldn't take a screen shot of the round 1000 followers mark, but I actually have an equally significant figure about in binary: 1024 or 210.

But while this milestone does feel like a worthwhile achievement, it's value might deserve some probing into. While there are certainly a number of people who are following me that I really appreciate and often engage with, this metric is bound to include some or a lot of dead weight. There are certainly people that are not active, people who never look into their feeds and accounts that were never people to begin with who'd follow you just for the follow-back so they can resteem spam into your feed.

But since I don't want to be guessing in the dark what is going on, I decided to mark my milestone with a little case study.

I wanted to know how many of my followers are actually people who see and enjoy my content even if it's just a tiny bit. So I decided I'm going to check what percentage of my followers has actually upvote any of my 2018 content. Just one upvote on any of the 32 posts that I've made this year would qualify a follower as an active one.

At the moment I conducted this little case study, I already had 1027 followers, so I took that as my sample. I looked at all of my posts from 2018 and recorded everybody that has upvoted any of them. The number of unique accounts that have upvoted at least one of those posts turned out to be 672 at the time the study was conducted. 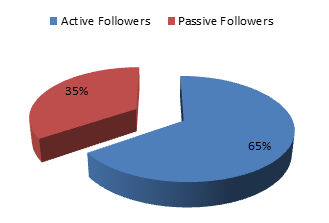 An inaccurate way of interpreting the data

On the face of it, this seems like very good engagement with almost two thirds of my followers giving me upvotes, right? Well, that's not really the case as not everybody who has upvoted at least a single post is necessarily a follower. So let's actually compare the lists properly.

The number of unique accounts that actually follow me and have upvoted at least one post of mine since the beginning of 2018 are actually 266. This means that almost 26% of my followers have engaged with me at least once. It also implies that more than 74% of the people who follow me have not upvoted a single post made by me in almost a month and a half and it might be fair to consider them inactive followers. If the sample period was shorted, there engagement would probably be even lower. It's also interesting to see that my followers comprise about 40% of my unique voters. Still, this does not mean that 40% of my total votes come from followers as followers are more likely to have upvoted me more than once (as there are people who have upvoted posts from me dozens of times already).

Of course not, this is justs a simple case study I have compiled based on my own data extracted from busy.org and steemd.com. One could look a lot deeper into this issue, looking at repeated upvotes, not just unique upvoters for a lengthy period, considering voting power percentage and steem power, but I will not go deeper than this today. I hope it's still interesting to look at.

Do you think your stats will be similar or different?

First off, this is absolutely something interesting to look at, especially since the number of followers we have on Steemit is supposed to be related to engagement on posts (even though people pretty much treat it like any other social media site and follow to be followed).

If it's not related, if it's just like everywhere else in social media, then something needs to change if Steemit or something like it is to ever be the "best of the best of social media" as one commenter on a post I read described it.

Mine, I suspect, is much lower than 26% doing anything with what I post. My guess is that it's closer to 3-5%. I have not looked at it in depth, but base that guess off of who I regular interact with on my own content.

Of that 3-5%, there's one user that always does (I have just over 100 followers, so my percentage is pretty close to the actual number), and then the rest come in somewhere below always. :)

So, if you're numbers were to turn out to be anywhere near 26% of total followers, you would be in pretty good shape, considering the marketers baseline used to be 1-2% of the audience actually buying the product or doing something about the message.

Thanks for stopping by, I'm glad you found something interesting here. I would expect your numbers to be at least one bit higher than just a few percentage points. Remember, if somebody upvoted a single post in the beginning of January, followed me and I never heard of them again, they still count as an active follower by the standard I've used to compile the stats.

I think there are very different people here in the way they handle their feeds. There are some seasoned steemians who curate their feeds very carefully and make sure they follow only people they really want to hear from. A follow from a person like that is indeed worth a lot and the simply follow and feed system here works great in that case. But there are also people who simply follow everybody to get a follow-back and this is dead-weight padding on the number. That's why many people on here call the followers count a vanity metric.

The only thing that I think is wrong with the feed here (cause I like it unfiltered) is the fact that if you post at regular times of day, a follower from a different time zone who is usually asleep or otherwise engaged at the times you post at might miss all of your content.

It cool you actually took your time in doing the statistics of your active followers, active voters and the passive ones.

I think i should record higher active followers that yours though it is still under probability. I hope i will reach that milestone of 1000 followers soon.

Thanks, man, I'm glad you think so! I'd agree it's likely for your active followers percentage to be higher right now as your followers all new while I have followers that have been acquired over a longer period of time, so the chance for them to have become generally inactive is higher. As I said, one could have dug a lot deeper, but those were the stats I was personally interested in right now.

If you remain active on the platform and keep contributing good content and engagement, you will reach the milestone sooner or later. It's all a matter of perseverance and consistency.

Thank you, I'm glad you think so.

Congratulation on your milestone it is the 1st of the 4 digit numbers :) . Active and productive participant make this paltform great. I wish you many more accomplishments !

Greetings dear friend, hahaha, now I follow you with this name, I hope it does not bother you, and reading a little what you say about your followers, you are right, but you should feel somewhat satisfied, since you have a good% of active followers, such Maybe one of the causes would be, perhaps more interested in other topics or just reading the publication out of curiosity and it was not interesting, but 100%, it has 40% and the growth is good, I hope that it continues doing these analyzes and publishing them when increases more%. Thank you.

When a message like that is expressed in nothing but big flashing attention-grabbing graphics, it somehow feels more like spam than anything else. When a message like that comes without an upvote, I can't help but view it as disingenuous. To make it clear, it's not about the upvote, it's about the attitude. Somebody with your rep and experience on the platform should know better.

The Post presented, I understand what it says that it has many images, but its content is of some knowledge and references in Google, what it considers valid, is the work it does to be able to carry out an advertising content, that people do not investigate about These problems that affect the human being. Thanks for your comment and regards.