How to put on a music festival: Some serious advice from some of the best years of my life.

Dream big and be prepared for failure

This was supposed to be a short reply to a question asked [HERE] but I kinda got lost down memory lane.
Title image is my logo design from "Nuclear Summer 2010"

You need two things to be an event organiser A passion for the music and a mobile phone. A passion for music, because if you get involved in this industry for any reason besides the love of it, your going to have a bad time. A mobile phone, because there is always someone who needs talking to, or problem that needs solving. If you had a large amount of money(preferably someone elses) behind you, an entire multi day tens of thousands of people event could be organised without leaving an office, but that's not the fun way.

First lets look at an 'event' the difference between being an event and a festival,it is a club night, a performance that happens inside an established venue. A festival is outside, you start with a wide open space and do everything!!

Most of my experience is within the electronic music industry, I have set up and packed down many 'band' type shows but I have little interest in them. So an event requires a venue, music( The DJ) and promotion. At the simplest level you find somewhere that has free venue hire (they make money from the drinks) you organise some DJ's to come play music, and you tell people about it, make a flyer, sell tickets and hopefully people come, have a good time and you make a tiny bit of money.

Established venues are great, they should have a decent sound system(should have....)that means no worrying about things like security, staffing(you often supply the door person to collect tickets and money though) toilets, the bar etc.

Lets wind back to the first ever event I put on:

It was my 20's and I was out at nightclubs every Friday and Saturday night, I had made a decent group of friends from all the regulars. After an awesome night the topic of putting on your own show would often come up, I decided to do it. I was unemployed at the time so I picked up some volunteer work(Free drinks :) as part of South Australias Fringe Festival. Once festival season was over, the I was able to hire the basement of the venue I had been working at for free.
I had a month get my self organised.

Starting from scratch I came up with a name I thought sounded cool "Nuclear Summer".
At this level there are lots of friends to call on and favors to ask. My housemate helped me with the Poster, I even printed and cut out fancy looking tickets at home, was aiming for a professional image, so I tried to do all the things other events did. A selection of DJ's was sourced among my friends I had met through clubbing, all agreeing to play for free.( It is very common for Dj's to play for free at small gigs, I have read countless arguments about how they deserve to be paid, the reality of it is there are people who love the music and will play no matter what because they want to. At small events is all about supporting the music scene, at this stage there are better things to spend money on when there are willing people to help you.

For decor on the night,we wrapped everything in black plastic, and scattered a bunch of mannequin parts around the place. Anything to make the venue look slightly different to what it normally did. Setting up 'the bomb' at my first 'Nuclear Summer' event.

I have met many DJ's over my time who are excellent when playing at home, but they have no confidence when playing in front of a crowd. I was the opposite,I had a slot to fill, so I played tunes(my mixing was terrible), but jumping into the deep end gave me much more confidence to perform than my highly skilled counterparts.

The big night comes, and we actually hit venue capacity(it wasn't a very big venue) Music is played, people dance and have a good time. it all went off reasonably smoothly, one of my DJ's was late showing up so I had to play slightly longer than I had planned for, down to my very last song, but the changeover was seamless. From the crowd perspective(the one that counts) it was a great night and more importantly it was something different from what was already being done.

One of the big reasons people put on events is so they can play their own music. One of the greatest feeling in my life is standing up there on a stage all the happy smiling people looking back. I actually made a profit from this event and divided it up evenly among the DJ's and volunteers.

Indoor events, don't really change a lot if you scale things up. If you have the cash to organise a massive headline act, and pay an AV company to setup the sound and lights, filling a stadium is just about making a few phone calls and having the cash to back it all up.
So simple, venue + DJ's + promotion, when you want to move outdoors, it gets a little more complicated.

A side note, I have made custom T-shirts for every event I have ever organised. This is a horrible waste of money, but it was fun. 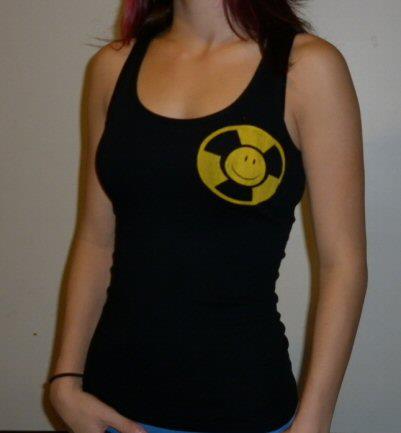 Hours of time and effort go into perfect logo placement

After my 'Nuclear Summer' experience, I actually got a job with one of the large Audio Visual companies in Adelaide. I have since worked at many large scale events and traveled the country but never organsied one from scratch.

Venue: Not as easy at is seems. Band music and Rave music have two real distinct differences. For a band style concert, It is usually all over by 11pm, everyone goes home and sleeps(except the crew who packup till 4am). Raves go ALL NIGHT LONG(The good ones do trust me) and then enter the "Bush DooF" Nonstop music for 3 or 4 days. (camping + music + dancing in the dirt its amazing:)

Playing music outside, loud!, for 4 days straight does no go down to well with the general public. So finding somewhere uninhabited within at least a 4km radius is a good start. Unfortunately where I life in South Australia, places like this are almost non existent.
4km might sound like a lot, but when you have tens to hundreds of thousands of watts of decent PA equipment, in an open space, those neighbors you cant see, will certainly hear the low whump whump whump as they are trying to get to sleep. Then they call the police and everyone has a bad time.

Speaking of Police, outdoor festivals require permits. Most permits are not very expensive and some council areas are very friendly, but if they don't want you there, permits will be almost impossible to get. You cant fight the system(legaly). An illegal rave solves these problems, but puts you at risk of being shut down early. You will need a plan for Fire, Security, First Aid, in some areas Native title issues.

Now the big one, often overlooked, but if its not done properly you will have a VERY bad time..... TOILETS!! if not supplied at all, you will have shit everywhere literally. Gotta have toilets. If your the one cleaning them, remember the more you have, the less dirty they will be. I have put on an event that had 22 toilets for 500 people and they were virtually spotless. I have been to an event where the organizer supplied 2 toilets for 600 people and ...... yeah.

Also, drinking water. Food and drinks can also be considered, but I have not had good experiences when also running a bar along with everything else. Outsource that to someone who knows what their doing, or just wing it, how hard can it be right?

So you have a Legal large piece of land, with all the basics, now the fun stuff

Decor, Having a creative crew behind you really helps with this one. Sure Old pallets and tarps fulfill the basic needs of a stage and shelter, but give the right people some cheap materials and freedom and amazing things can be accomplished. Even for large events, people will often contribute in trade for tickets.

The bits where the money goes!!!
Power, hire some generators and stock up on diesel. (don't want the generator to stop mid set) You will also need three times the power chords you think you need.

Sound. The problem with having spent so much time as a sound tech, is you start to notice how bad the sound is everywhere. This condition will affect you for the rest of your life, but this is a music festival , so why not aim for perfection.

Lighting. A decent light show improves any party, not many people want to stand around in the dark. For a multi day event, lighting for all the area must be considered, not just the stage.

Lasers- I LOVE LASERS. The world need more lasers and it is my mission to make it happen.

DJ's - same as before, but as your events get bigger, you will probably want some bigger named artists and they cost money. Flights, accommodation and performing fee.

Is it possible to do ALL this by yourself. Almost....
In my life now, I have the skills do all these things, from the graphic design, calling booking agents, permits, performing( My mixing has vastly improved over the years), I can build shade structures, dig trenches, run cables and operate insane laser shows, but its always easier with some help.

I have stated before that I am working on running a proper outdoor festival of my own, probably 2 days maybe a thousand people. The thing I am still lacking is a decent venue. I also have currently zero funding, but that means things like the PA system, I will not be hiring one, I am building it from scratch myself. Its hard to explain quality music reproduction at ridiculous power levels purely in text, but trust me the 4km rule is there for a reason. Over time I will continue to build and acquire everything need for my next(last?) big festival. The things about having all your own equipment is less hire costs, and it makes it super easy to do it all again.

If you want some real advice, put on an event, and keep doing it til one fails. Failing will teach you more than anything else. Probably the most disappointing moment in my life, was having to tell a whole crowd of people we got shut down early. That same event was also one of the biggest learning experiences of my life. (There is of course a whole lot more to that story) Congratulations @raptordashzero! You have completed some achievement on Steemit and have been rewarded with new badge(s) :