If you've been reading some of my posts it's no surprise that I'm a believer in Stratis.

Written many posts about it. I've even called it an Ethereum killer in a more provocative post. See:

But make no mistake, Stratis is architecturally and therefore technologically ahead of Ethereum. And we all know a single DAPP brought that platform in its knees.

Anyway, the Stratis team have a pretty exciting roadmap for the rest of this year and their development is very much on track. Official Microsoft support, full node available in Microsoft Azure, mobile dashboard app and a Breeze Wallet have been released. See:

And it gets even better when it comes to Stratis news. About an hour ago this was tweeted which was retweeted by Stratis themselves: 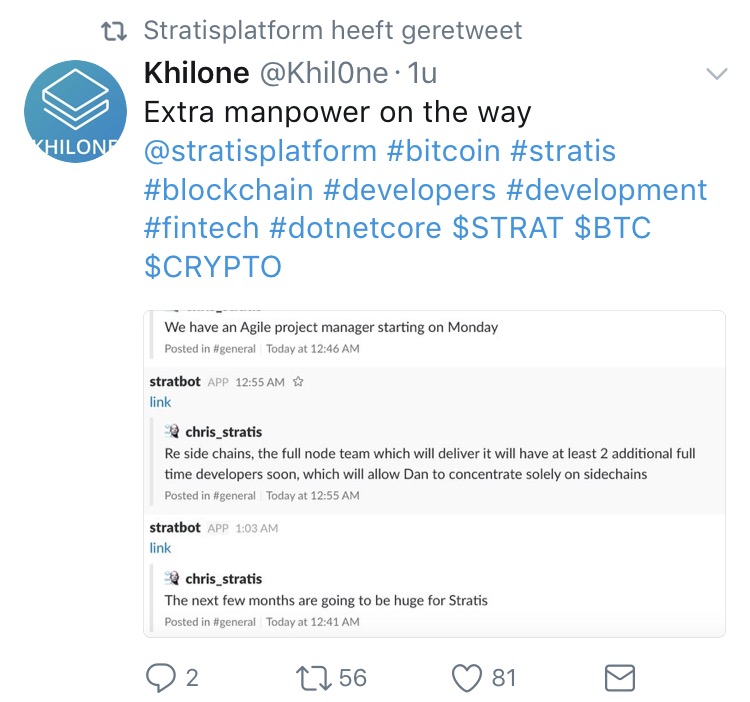 Stratis has a big bright future ahead of them and I'll follow closely.

Submit
$0.09
6 votes
8
Authors get paid when people like you upvote their post.If you enjoyed what you read here, create your account today and start earning FREE STEEM!
Sort Order:
[-]
jkkim (53)  ·  3 years ago

thank you for reporting.

I didn't have time to watch but stratis is on my list of cryptos to reccomend. It is a great project.

Awesome. They will reach new heights this year.

They're on a roll lately. One positive news-item after the other.
Go Stratis!

I don't know about ethereum killer but stratis is a sleeping giant. But ethereum has a lot of competition i find. Antshares being one of them.

Of course no one knows but that specific scenario is definately in the cards I feel.

Yes ethereum has competition, Antshares (NEO) might be one of them. NEO needs to find some traction in the Chinese market, if that happens the rest of the world will follow for the ride.

What would happen if Jack Ma decides to implement NEO in his AliExpress for example?

I'm a big believer in Stratis, too. Excited to see how far it can go!

We will see a lot this year. I expect them to reach new heights.