The Beauty of the Early-2018 Crypto Massacre: Coins Showing Their Muscles The Correction So Far

So, hopefully by today, February 3rd, everybody is emotionally over the recent annual massacre in crypto land that has taken place since December 17th 2017. We may have found the bottom this week. Nonetheless, don’t be surprised and let yourself be demoralized if we happen to keep further sliding down the slope with Bitcoin and the market together. This correction, or cyclical/annual crash, you name it, has been actually very healthy and is much needed after the crazy Lambo time that characterized the market in the past three-four months. Why? Because speculators were literally throwing money at coins, tokens, and shady ICOs without any knowledge about them. Lessons hopefully learned. Now that a global shift in money allocation appears to be taking place from Asia to Russia/Europe and America, I’m quite sure Lambo time will come again along with the next cycle of corrections. Having said that, they won’t look like the same in my opinion though. Let’s just move on.

So Why is a Bear Market Good for Me?

I’ve been investing in the stock market for years so I’m well aware of the importance of market corrections. Believe me or not: The longer a bear market is, the healthier and maintainable the next bull run can be. I’m just praying right now that this bear market stays for at least one or two months longer.

So instead of checking your portfolio every 10 minutes that is struggling to recover and go back to the much desired previous all-time-high level, what else (and more useful) could you do during such periods? Well, you should be monitoring the overall market and also be watching for individual strength, i.e., coins outperforming the market, and understand their reasons, just like in the case of stocks. But how can you do that in a simple way so that you won’t need to look at each and every chart individually? It’s actually pretty easy. I’ll show you what I just did yesterday and the interesting findings that came along with it.

I did a very simple but effective technical analysis about the first 100 coins and tokens on coinmarketcap.com (CMC). Since Bitcoin price still serves as the #1 benchmark for the whole crypto market, I first had a glance at the extent of its correction during the period of December 17th 2017 and February 2nd 2018. It turned out to be 60% as compared to USD. Then, I calculated the correction values for all other coins and sorted them accordingly (again, calculated against USD). You see the worst performers, meaning the last 20 out of 100, in the following table: 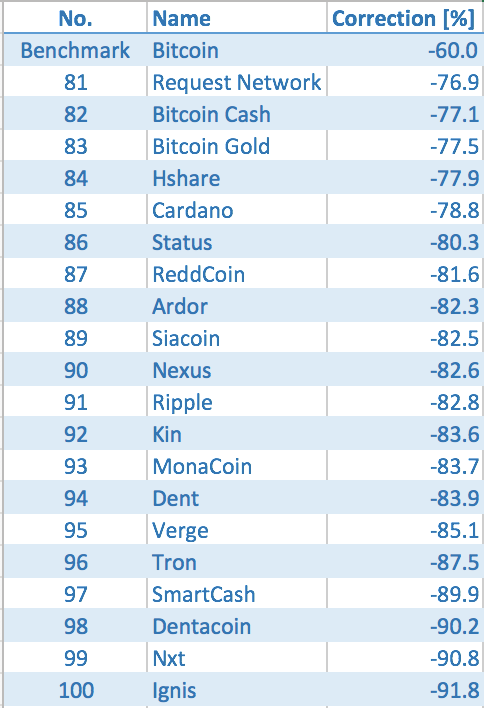 Surprised? Hopefully not. A lot of the overhyped coins ended up being here, having lost tremendous amount of value even in crypto terms. Bitcoin lost ‘only’ 60% while these coins underperformed their benchmark and the overall market by plunging some 80–90+ %! That should be a red flag for all of us. Of course, I am not saying that none of them will recover in the near- or long-term future. That would be just unwise. In fact, some of them might turn out to be more than just hyped promises. Nevertheless, fact is a fact: These coins were the main victims of Lambo time in the past four months.

Ok, here we go with the more interesting part. Who have been the ones outperforming Bitcoin and the market overall? You can see the list of the first 20 here: Now, don’t run to your PC or Mac logging in to Binance in order to buy all of these blindly. Let’s take a closer look and take some considerations here. First of all, there may be different scenarios. A coin or token may temporarily outperform the market because of some ongoing events; for example, rebranding, some recent launch of services, hype, etc. As such, a crypto may have been volatile in some positive manner due to its temporary upside swing. Other option is there have been simply no significant numbers of panic sellers despite the recent distressing market conditions. In plain crypto English, this means that most of the coin holders are real HODLers having bought them for the mid- long-term and are not willing to give them away, no matter what. Why? Well, possibly because they familiarized themselves with the team and the offered technology, tried it out on testnet or mainnet themselves and believe in it.

For the above considerations, I added a second column to our table, namely, volatility. Volatility values are estimates taking the high and low extremes for every day during the most emotional period of market correction (January 1st 2017– February 2nd 2018) and calculating the standard deviation by means of those extremes for every coin. Note that this volatility estimate is BTC-based. Let’s see the same list sorted by volatility one more time: 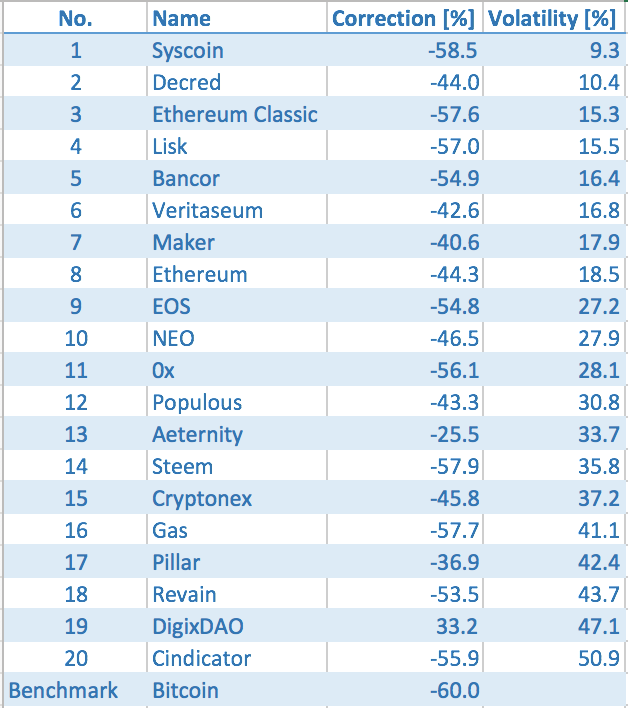 Although this is subjective, in my opinion anything over 40% volatility is quite rough and must have come from some recent series of events other than the overall market behavior. Having said that, look at the coins under 30% or even 20% volatility. Some big names emerge there: NEO, Ethereum, Ethereum Classic; and also some fairly new ones: Decred, Lisk, Bancor, Maker. Interesting, isn’t it? What your eyes should also be caught on are Syscoin and Decred having by far the lowest BTC-based volatility with 9.3% and 10.4%, respectively. It’s quite clear to me that a massive amount of people bought them for HODLing and don’t even think of selling them for a while.

In this write-up, I hopefully gave you a different perspective on how to search for potentially hot coins during a bear market. While I have found the results very interesting for the current market conditions, I want to make it clear that my work presented above is a very basic technical research and nobody should blindly invest in any coins or tokens solely based on some technical analysis. If interested, please do further research on the above cryptocurrencies in terms of their fundamentals on your own. This includes, for example, visiting their websites, reading whitepapers, trying out their products if there are some, chatting with people familiar with the team and their technologies, and so on. Always take the time to do your own homework and never solely rely on anybody’s words. Such attitude will bring a much more exciting Lambo time in 2018 and beyond.

Great analysis. It may sound stupid for a lot of people when I tell them that I felt uncomfortable after the bitcoin surge und after that this crazy altoin run where people literally threw money on every coin which was "cheap".

Now after - or while - this correction iz feels right. Everything feels good again. There's no more, at least not that much, stupid money in the market. That's why I bought actually more cryptos the last day. Not that much because I can see the market dipping quite more but a little bit.

Thank you! Yes, I believe we're going to slowly shift to a more level-headed investing period, although it might still take years to eventually get there. I'm quite sure that this is not the end of the story and we're going to see better times sooner than we might think.

Great analysis, thanks for sharing!