I’m going to show you a method that I’ve been studying for more than 20 years, but I’m applying it in an experimental and unorthodox manner. This method was described in a text written in Greek almost 2000 years ago in the Anthology by Vettius Valens. It is called “ζοιδιον απηεσισ” or “zodiacal releasing”. So that you understand what I’m trying to do and why, first read Why I don’t believe in Astrology (but still use it).

I wrote a special program for this technique because nobody else would do it. There’s a back story to this, that you might want to read (software pictured below). 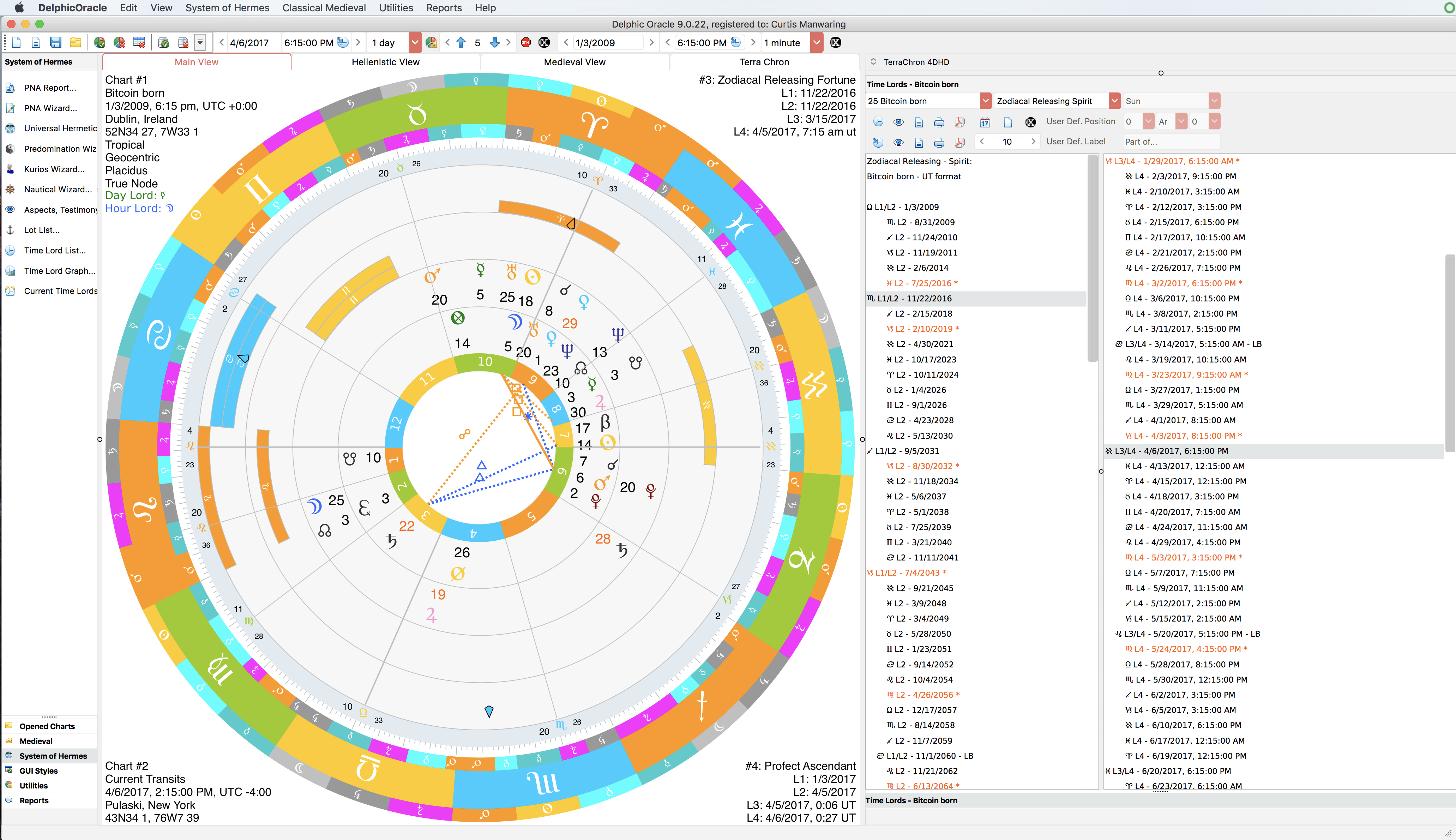 Theoretically this technique was only used with humans who are alive and conscious, acting with volition, but since bitcoin does have a reputation, it might be possible to map its patterns using “zodiacal releasing from the lot of spirit”. Astrologers argue about many different metaphors, but I won’t be fully describing them here. Instead, what I’m looking for is a pattern and repetition.

When looking at the price of bitcoin, you will often hear market analysts talking about support and resistance levels. Since astrology doesn’t really have any numbers attached, you can’t really say “bitcoin will be worth X amount on insert date here”. But I will be attempting to describe a pattern out of something that appears to look like white noise. The patterns are so complex that they do not look regular at all but at the same time are perfectly predictable. Within the context of zodiacal releasing, what I’m looking for are what would be described by Hellenistic astrologers as a “change in the wind”. Symbolically this would be the breaking of either support or resistance levels by market analysts.

We can say the same thing about SHA256 hashing algorithm in bitcoin because given an input, the output looks random. But the output is in fact highly deterministic; given the same inputs, the same output is generated every time. What’s different about SHA256 is that efficient causes regulate the result. However, astrology cannot be said to use efficient causes at all. Rather, it might be said that material causes (or risk factors) might be mapped in such a way to correspond to a result without “causing” it.

In the same way we might say that at 5:00 pm in Seattle on the 405, the hour hand indicates seriously bad traffic stoppage. It wouldn’t be correct to say that the hour hand pointing downward at the “5” caused the traffic jam. Yet we know what to expect, don’t we? That’s how I’m using this method.

In particular, the method of zodiacal releasing seems to describe with remarkable accuracy the high’s and lows in peoples careers given that the lot is “chrematistikos”. This word in Greek means “busy” or “telling”. In other words, Valens seems to suggest that if the chart isn’t telling with regard to the lot, then you shouldn’t use this method.

In this case the lot of fortune falls in Taurus in the 10th, and both its lord and the lord of the lot of spirit happen to be in what’s called the “acquisitive place” (the 11th sign counting forward from the place of the lot of fortune). So according to the rules, this method shouldn’t be “achematistikos” (in Greek, the letter “a” in front indicates negation). (Bitcoin inception chart given to me by William Stickevers)

William Stickevers (who used to work on Wall Street) said that a friend of his dug up the records in computer logs showing the time for the genesis block at 6:15:15 pm in Dublin, Ireland (time rounded to nearest minute). While there are other proposed times and locations, what I'm looking for here are patterns. One can try other charts to see if the patterns are "chrematistikos".

I would like to state here that theoretically what we are looking at here isn't the chart of a single entity (such as bitcoin alone). As such it represents an event that could be said to stand for all cryptocurrencies. I have noticed that most of the time whenever bitcoin rises, so do the altcoins and vice versa. However, when a coin forks, one could try to use the inception of the fork to see if a different pattern emerges.

If we take a look at the long view of bitcoin, we see that the broad pattern also matches Litecoin and several other crypto's that also had a spike in price in the fall of 2013...

The general period (Libra) which lasts for 8 years would be considered cadent which within the context of spirit (if this was a person) would indicate lack of activity (in the metaphorical sense would this indicate lack of trading volume for a financial chart?). There's a sharp contrast to this in the Libra period that hands over to Capricorn at level 2: We see that a peak was reached on Nov 30, 2013 with a price at about $1,100.00. This was after the loosing of the bond in Capricorn to Cancer which then hands over to Scorpio and at the time of peak Leo at level 4. Notice that at what would have been Virgo at level 4 (Sagittarius at L3) indicates a downward trend. 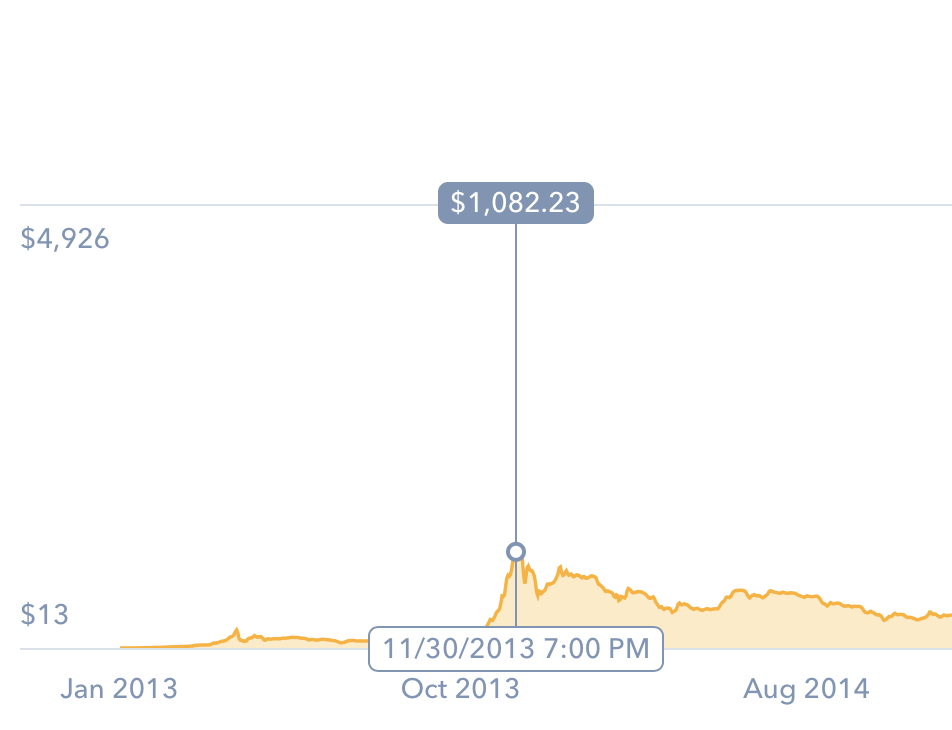 Unfortunately the graph resolution makes it hard to decipher right now because todays prices make everything that's happened in the past, pale by comparison. There seems to be the following pattern; cadent periods (3rd, 6th, 9th and 12th) seem to indicate changes in direction of the market. In particular though, the succedent periods that precede Aries and Libra often show the greatest changes (that would be Virgo and Pisces periods).

When I was looking at this last winter, the scale was between 0 - $1000 / BTC, so the nuances were easier to see. Angular periods seem to be peak activity or trading volume. If this was a nativity we would expect a person born at such a time to come into prominence when ZR spirit reaches the 10th sign from the lot of fortune.

The glaring difference is most apparent though at the general times. Under Libra level 1, the price never stayed much above $1000. But shortly after entering the Scorpio L1 period on Nov 22, 2016, the price started spiking again.

The other pattern that seems to be apparent is that Sagittarius periods tend to be slack (we saw the drop off in price at L3 in late 2013). (Theoretically Valens would have said this was because it's in the idle place (8th sign counting from fortune) and because the domicile lord (Jupiter) is under the beams and in depression (Capricorn).

One of the most important principles in the way I've worked with this technique is the principle of extrapolation. The sub periods in earlier and lower levels often mimic what happens at higher levels in later periods. In biology, the idea that ontogeny recapitulates phylogeny gives you an idea of the future of an organism. The same might be able to be said of the early behavior in this chart and how cryptocurrencies will behave in later periods.

For instance I wrote the program Zodiacal Aphesis 1.0 and published it under Aquarius L1 -> Leo L2 in 1997, when it went to the loosing of the bond in Leo in 2005, that's when Delphic Oracle got significant press.

The other noticeable pattern in the bitcoin chart seems to be that the greatest turning points happen under Virgo or Pisces periods. This means that if the earlier trend has been up, you can expect to see a downward trend and vice versa. I should say that this hasn't always panned out especially at level 4 because these repetitions happen so often. Theoretically each of these periods has "winds" in which the quantity and direction of the wind is controlled most powerfully at the higher levels. Lower levels in general do not indicate a significant enough change.

So what can I extrapolate about future price predictions given this chart? That the Sagittarius period of Feb 2018 until Feb 2019 will be slack in comparison to what comes under the Capricorn period in 2019? If I want to be precise, for it to match the earlier period, we might not expect a big price spike until after the loosing of the bond in Capricorn that starts Feb 2019. This wouldn't be until Feb 21, 2021. However, this is an angular (Scorpio) period which suggests that because the encounter of the domicile lord happens (Mars exalted in Capricorn in joy in astrological terms) that the pattern might replicate closer to the beginning of the period. Then we might see the prominence that bitcoin exhibited this spring, show itself in the early 2020's when the levels at L3 repeat themselves at L2.

One of the problems with this is that I have to point out that we can't really say that the baseline is level. With the fundamentals of bitcoin being so strong (or rather that the currency wars make their own fiat weak) along with other factors as being the real causes of these connected material causes, we can't say that the slack periods (such as Sagittarius) would indicate that the price go to zero. It might, because perhaps the technology wearing the bitcoin label forks off and the fork become successful whereas the "classic" version loses.

It might be that what this is saying is that bitcoin only goes to $20,000 by Feb 2019 and then "shoots to the Moon". By todays standards, reaching $6,000 would be considered the same thing. What I can suggest is that whatever price the most dominant form of this technology exhibits between 2020 - 2024 is likely to be peak. It may or may not wear the bitcoin label. Technology is a moving target and as such its "identity" changes every day. 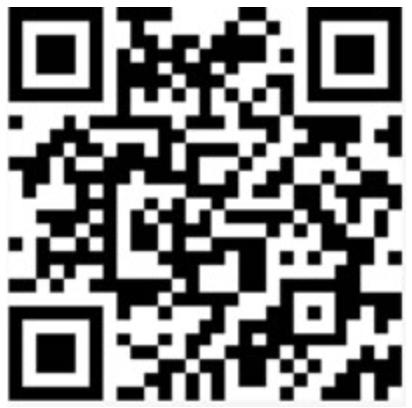 Fantastic writeup, I may have to reread it on my computer at a quiet time to see the bigger picture. Thanks for the time spent on this gem.

This post has received a 1.27 % upvote from @booster thanks to: @zoidsoft.

This wonderful post has received a bellyrub 4.66 % upvote from @bellyrub thanks to this cool cat: @zoidsoft. My pops @zeartul is one of your top steemit witness, if you like my bellyrubs please go vote for him, if you love what he is doing vote for this comment as well.

The @OriginalWorks bot has determined this post by @zoidsoft to be original material and upvoted it!