What do you know about Bitcoin? Have you heard that Bitcoin price has doubled every 4 months in average since it was created? Have you heard that it’s the future of financial innovation, or that it can make banks obsolete? Below you will learn what Bitcoin is, how does it work, and why it is special in an easy to understand way.

Bitcoin was activated on January 3, 2009. It is the first decentralized digital currency. Decentralized means no single entity controls Bitcoin. In order to use it you don’t need any middle man, you don’t need banks or any other companies. It is a peer to peer network without a central server, and it is impossible to shut down.

Bitcoin is expected to change the world of finance as it enables everyone with access to internet to participate in global trade. There are many people who don’t have bank accounts. With Bitcoin they can trade freely. Anyone can use bitcoin without asking for permission and your account cannot be frozen because there is no central authority controlling Bitcoin. You can think of Bitcoin as a digital equivalent to currencies like dollar, pound, yen etc. You can send bitcoins to anyone through the internet. It’s like Paypal – just much faster and cheaper.

Merchants can accept bitcoins easily, in a way similar to accepting debit cards. Receiving side does not pay any fees. Merchants accepting credit or debit cards pay transaction fees to the bank so accepting Bitcoin is more profitable for them. Merchants also have the added benefit of no charge-backs. Once bitcoin transactions are recorded in the public bitcoin database – called the blockchain, the bitcoin recipient is the only one who can decide what to do with them. Bitcoin is similar to cash, once paid it is impossible to reverse bitcoin transactions.

To start using bitcoins you need a digital wallet. There are many types of wallets and we’ll cover that in another post. The wallet has both a public and a private key/address. Your public address (similar to your bank account) is your recipient address to receive bitcoin. You use your private key to unlock the balance on this address.

To transact bitcoin you simply enter the amount of bitcoin you want to send and type in the recipient address. That’s all, the wallet and the bitcoin network checks that you have a sufficient balance and confirms the transaction.

Every transaction is signed with the sender’s private key, known only to sender, and is validated by their public key, known to everyone. Transaction information together with the private key create a signature which cannot be forged.

There is different software for wallets. You can have one on your PC and another one on your smart-phone. You can even use the same wallet on more than one device. You can write down your address and private key on paper (to keep away from hackers) or use a hardware device which keeps your keys safe.

Just like the gold is scarce, bitcoins are scarce too. The total amount of bitcoins to ever exist is limited to 21 million bitcoins. As more and more people buy bitcoins, limited supply is causing higher prices. 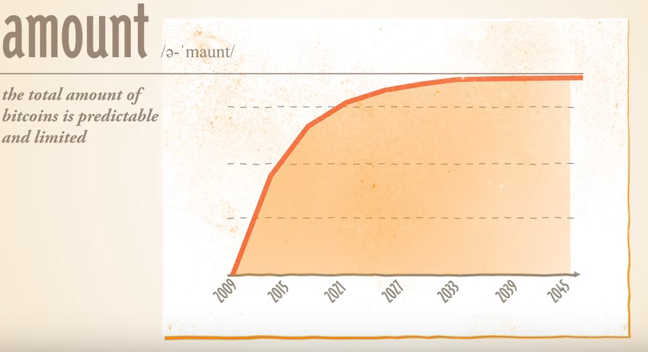 By now you should be feeling more knowledgeable about Bitcoin. If you would like to dive into more technical details of Bitcoin, I suggest reading Bitcoin design paper (whitepaper) published in 2008. https://bitcoin.org/bitcoin.pdf

Congratulations @shenol! You have completed some achievement on Steemit and have been rewarded with new badge(s) :

Congratulations @shenol! You have received a personal award!