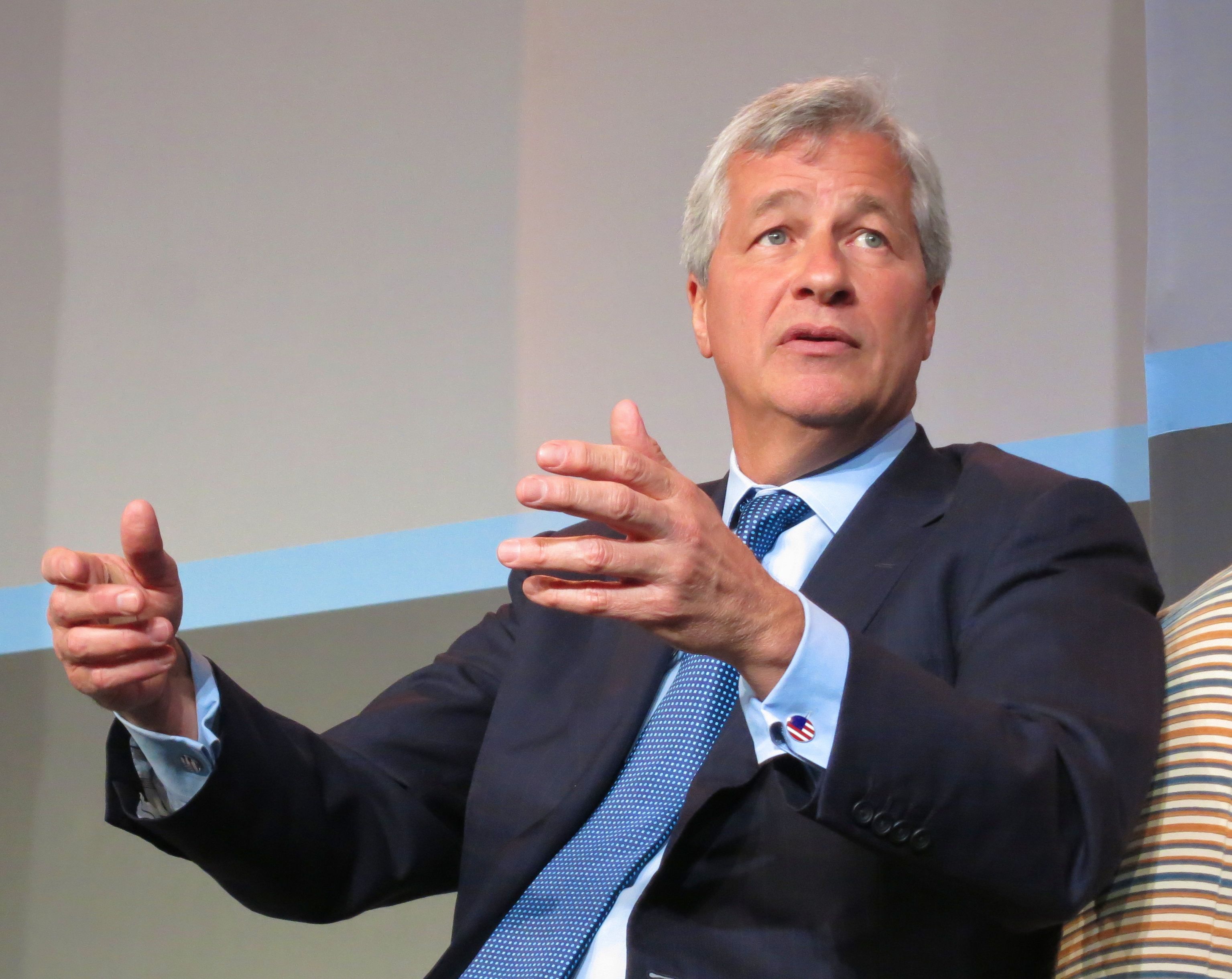 Several of my friends sent me links to J.P. Morgan CEO Jamie Dimon's infamous interview on CNBC television, in which he says several memorable quotes. Among them, he said

"My daughter bought Bitcoin. It went UP. And now she thinks she's a genius !" (note: In my opinion, she is smarter than her dad!)

Now, I want to send them this other quote, which Mr. Dimon did me the favor to point out:

I agree that it is a wave. We have all been impressed by this easy and inexpensive manner to buy and sell.

I am going to RIDE THE WAVE TODAY !

Note: Fellow Steemers: Please retweet. Send this post (or the mime) to all non-believers.

Copyright by Ellis Toussier, but I place it into the public domain.
Photo of surfers riding the wave, by Viaje Jet . com labeled for reuse
Photo of Damie Dimon, wikimedia.org

I am going to spend my money to PROMOTE this post, because it hit a raw nerve on me that Jamie Dimon's comments helped to cause the steep downturn in the Bitcoin and Ethereum and all cryptocurrencies... I have to point out to those who doubt, that he also thinks it might hit $20,000... no... $100,000 before it "collapses"

Please be sure to UPVOTE this post, so that it will be seen by more Steemers...

And please FOLLOW ME for more fun and games.

It will collapse because JP Morgan would have dumped it and taken their profit..Only to buy it up again when its low..SO SO SO bad that a big corporation can do this again and again...

Even if it ends up being a fraud(which it isn't) then we will consider it the best fraud ever since it would have changed millions of life's from poor to rich. who wouldn't love to to be part of this so called fraud. his daughter have a fraudster mindset.

For each person who gets rich off crypto would come with lots of losers, because the money has to come from somewhere.

But we don't have to lose, if we can spend the crypto on something of value. For this reason, I am starting a crypto classified ads which I hope you and others will support. I will announce more about this soon. I would like to have many many many partners, ie, stock holders in my website.

I'm always open for partnership. My site is http://coinsrex.com

When you talk about riding the waves ,you miss the point in the technology underlying Bitcoin, Blockchain technology. Blockchain is here to stay, Bitcoin might not be the ultimate winner in the crypto space but its ushered in a new technology that is simply unstoppable and new use cases will spring up and change the world.

When I talk about "ride the wave" I mean the wave of new technology that has happened, and also I mean "ride the wave" of increase in the price of Bitcoin, if it is at about $4,000 and if it will reach $100,000 before it crashes (according to Jamie Dimon's opinion) well, then, I will like to ride it UP.

I believe in Bitcoin and crypto. There will always be naysayers in the face of progress. And besides, I agree- ride the wave before it collapses

Yes sir! Ride the wave before it collapses... (if it collapses... ) If it gets to $100,000 and then collapses to $50,000 I will be a happy man. I think Bitcoin will go UP before the end of the year, and it will pull all other crypto currencies UP with it. I think that based only on the trend line. The trend is that it will go UP.

Hate this guy. I can't believe he had bought bitcoin after he had crashed the market.

How can a technology that solved the Byzantine fault tolerance problem be a fraud (https://en.wikipedia.org/wiki/Byzantine_fault_tolerance)? The problem was described by a Microsoft engineers in 1982 (https://www.microsoft.com/en-us/research/wp-content/uploads/2016/12/The-Byzantine-Generals-Problem.pdf ) and until Satoshi, no other solution worked. It sounds like the inventors should receive a Nobel prize, not be accused of fraud.

This new technology allows us to write and deploy autonomous systems that eliminate the need for middle or central authorities, costly system/security administrators, distributes infrastructure costs and is programmable. With all these improvements, do you really think Bitcoin will fail? Usually technologically advanced systems displace the old technology but it takes time and the incumbents aren't too happy. Think of the horse and buggy. Some doubted the automobile and Ford's "crazy" assemble line had a chance to compete.

Great post. We need to actually ride the wave

Yes. That is exactly what I imagined. Bitcoin might reach $100,000 before it crashes... and you (Jamie Dimon) are saying it's a fraud?

@rejuvenation Thanks for publishing this Charming instant in time for yourself. Upvoted.

Thank you for your kind words. "Charming" is not what I expected. It was me, thinking of how to poke fun and also the irony of James Dimon's words. Isn't that funny? He says Bitcoin is a scam, but in the next breath he says that it might get to $100,000 before it collapses! So.. the wave will eventually collapse, too, but the surfers are riding the wave now. So... I put it together. Thank you! It feels nice to think I am "charming" ! Ha!

Wow great, is it true please inform me.

Yes, of course it is true. See the URL which I place in the photo of the surfers riding the wave.

Thank you! At your service!

Interesting post!
I just wrote a post on the same topic:
Jamie Dimon is a liar, a fraud and in his own words: "stupid" - Did he intentionally manipulate Bitcoin market?

@rejuvenation This is supercool! Thanks! Followed

Thank you, Oguz... I will follow you too. Thanks for your upvote.

Thanks for the link.

GET Your Web Hosting for $10 USD while STOCK LAST. Only STEEM and STEEM DOLLAR Accepted - HURRY NOW!!!
https://steemit.com/steem/@steemserver/get-your-web-hosting-for-usd10-usd-while-stock-last-only-steem-and-steem-dollar-accepted-hurry-now

Amazing. I have an idea to do something along similar lines, to make all crypt currencies more acceptable to the non-believers.

Hi, I just upvoted this great post and hoping you could do the same to this post of mine: https://steemit.com/introduceyourself/@glasscannon/hola-steemit-its-nishant-xd
Thanksss!!!!!!!!

Done. I read your post and I upvoted it, because it deserves to be upvoted. Thank you for your support on this post.

I'm sick of this seeing this jagoff in the news. His opinions are just that: opinions. He's not a wizard.

Of course he is not a wizard. His opinion, however, counts more than my opinion, because he is supposed to be a financial wizard, since he is the CEO of one of the large banks. That is why, he is "opinion" that Bitcoin is a fraud, but it might reach $100,000 before it crashes... that made me laugh. I think his prediction will become a fact some day. I don't know WHEN, but I think it will happen.

Bitcoin prospect does sound very exciting, not without it's drawbacks.
It can go either way, completely skyrocket and reach 10k and more; all it needs is one big player (corporation, government, organization) to officially start accepting it.

On the other hand, what if USA, UK makes it illegal to own, trade and exchange crypto? What actually makes it valuable?

The future of Bitcoin is being discussed right now by Governments. It has been officially accepted as "legal" by many more governments than have said it is "illegal". So far, it is legal in the United States, and E.U., whose lead many other countries follow. Crypto has a use as a payment media accepted in more countries than accept the Mexican peso, for example. It is probably easier to EAT in China if you pay with Bitcoin than if you try to pay with Mexican pesos, or even if you try to pay with Swiss Francs.

@rejuvenation I like your submit. I have followed you.