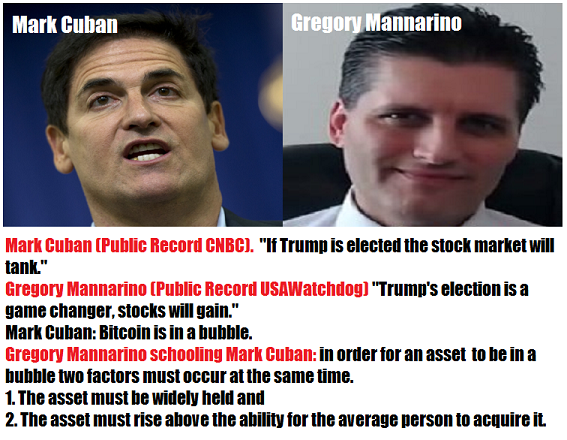 In NO WAY is Bitcoin in a bubble, and every single one of my Lions knows it!
Much love, Greg...

The only thing that will bring the price down big time is if there are big governments making it illegal which I can't really see now, or the encryption is broken.

Crypto's are a whole other ball-game , eh, i mean assetclass ;-)

Mark will probably use this opportunity to buy the f***ing dip!

Mark Cuban and many other very smart business people like him have not grasped or studied the BTC/crypto technological paradigm shift that will be seen in just the next 3 to 4 years. They are like the internet in 1995 in their understanding, acceptance and their present capabilities. But unlike the internet taking another 7 to 8 years for the dynamic impact on business and finance to be felt - the Cryptos move and impact upon business and finance are going to be extremely swift moving and breath taking in both their utilization and their upward price movements, especially for the Big two BTC & ETH.

I don't understand how anyone can say Bitcoin is anywhere even close to being in a bubble... 97% of the general population still doesn't even know what a Bitcoin is.

ALERT: I was amazed to learn that all the coin shops in my area have a glut of silver eagles. The dealers stated people have been selling so many of them lately. I polled many coin dealers..
I asked them all, why is this ? Most Dealers stated, not only silver but gold as well, they are selling to use the money to play the stock market.. I couldn't believe my ears, however, many also said they were tired of holding them because they don't want to loose anymore money holding unto them. Dealers buy price is SPOT for Eagles, and sells them for 3-4 dollars over spot.
I live in the Midwest and that is what is going on in this area. Has anyone information in their area ? Please share were all in this together.

No coins in my area but if they're willing to trade actual wealth for paper more power to them. I picked up 5 silver Libertads the other day and was and AM happy I have done so. The f&$n' market will devour these people. Over bought and manipulated beyond belief.... ain't they a tad bit late to the party anyways?

Morons. The stock market is pumped to bring in the suckers before the drop. Someone should write a primer explaining in simple terms the history of the stock market scam.

Hi. Just wanted to say; because of you and Bix Weir's recommendation, I joined Steemit 3 weeks ago. And am learning so much. Much mahalo! Aloha!

ME AS WELL!!!!! GOT A FEELIN WE MADE A GREAT DECISION

Who the hell is Mark Cuban?

You're telling me that, although this guy has 6,999,990,000 more green toilet paper crap money than I have, he doesn't have any clue about BTC and its disruptive nature? You're kidding, aren't you? Have a nice one!

I imagine most of Cuban's billions are in tangible assets. Not a math formula backed currency that can be brought down at any time by any large gov't shorting it.

You're absolutely right! A smart guy like he is, has definitely diversified his assets. It was all meant to be a joke...- from the beginning. But math isn't a joke and also the inability of the gov to shut this mfbc down!

Yeah, but I have more crypto than him.

Congratulations @marketreport! You have completed some achievement on Steemit and have been rewarded with new badge(s) :

I agree that bitcoin is NOT in a bubble, but I will NOT buy any cause I can't hold them in my hands!

Physical silver only, I need to hold in my hands!

I have made more on a small amount of bitcoin than I have on a (for me) large amount of metal. And I did take profits, but am still buying in

So when you look at the balance in your checking account online it is worth nothing? Right? You're not holding it in your hands. There's nothing tangible to it - it's only numbers on a screen. So be sure that unless you're holding the actual dollar bills in your hand that you never count your bank savings as part of your net worth. LOL!!

I printed mine out and moved it to that paper wallet. I hold mine all of the time :)

I love physical metals! Especially silver!! But today alone I made 9.74% on my sliver & gold stocks...
Earn dollars any way u can; legally & morally. Use the profits to pay down debt, stack silver and enjoy life!!!

Great job Mannarino. Cuban is a globalist shill - probably trying to talk cryptos down so he can buy in. He did the same thing with gold last year. Talked it up while it was rallying, probably well aware that it was going to be slammed. Nice to be a front-running billionaire insider. Lions will prevail.

I look forward to the day, which I believe will happen this year, that the total market cap of all crypto currency is equal to JUST the market cap of Amazon.

Great post! @marketreport Let them know, there's no bubble, there's still plenty of seats on the bus. Tell your friends and fam to hop on in! Let get wealthy and keep BOOMIN!

Cuban is wrong again, crypto is not in a bubble

Cuban is using his platform to try and manipulate the price which wont happen. He must have sold the last dip thinking it was the all time high. We will get to 10k end of yea Keep loading. I'm a bitcoin and ethereum holder.r..

You're right Greg. Those two bubble factors for bitcoin are not being met at the same time. 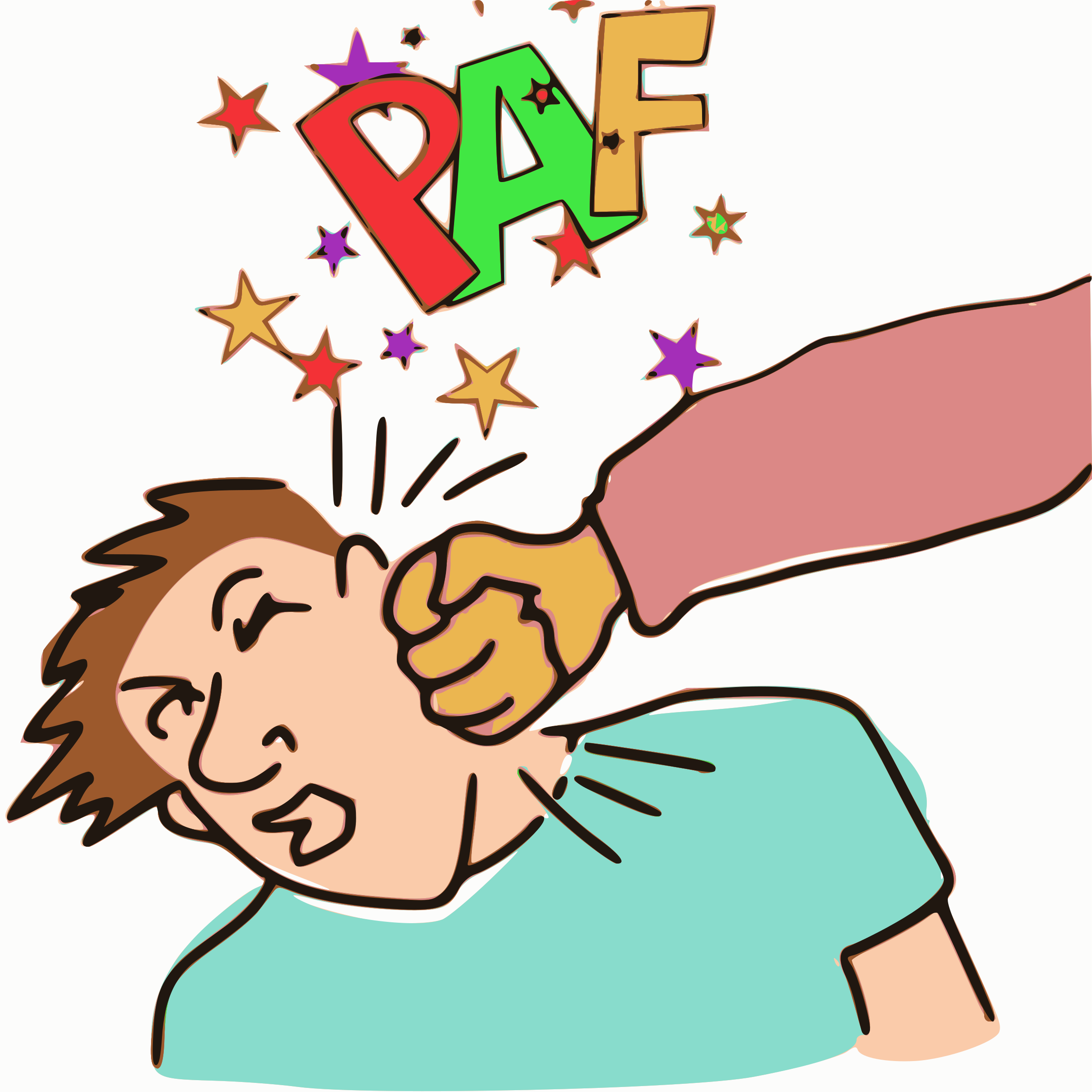 and its a TKO For Mannarino OH YA

Bazam! Greg with the kill

@marketreport with the clap-back, love it!

oh I remember those articles of the stock market set to crash 900 points the day after Trump's election....nope, quiet the opposite!

The stock market bubble will crash soon. Even quicker if Trump keeps opening his mouth.

Hahahaha nice one Greg I never could stand that guy.... Btw let's see what Putin's apparent infatuation with ethereum leads to!

I try to make these points everyday to my Gold Bug friend. He disagrees and won't touch anything that goes up in a parabolic move. Pains me to see him sit in PM's while crypto's explode. He's in PAPER gold nonetheless.

You go get em Greg! Cuban is a retard.

Mark Cuban has no idea what he's talking about. I can't stand listening to him. lol

This guy Cuban is about the. Most idiotic person I've ever heard of. Hopefully he takes all is money out of bitcoin and put into fiat, stocks and bonds. Then to the poor house.

Thanks for all the info you provide us with, Greg! I just want to see that it is much appreciated.

Mark Cuban is just another example of how any moron can become a Billionaire, all it takes is being the Greediest of the bunch. That's the true function of capitalism, to reward and give the most respect to whoever is the most selfish among us.

I have noticed that about him. He has learned a formula and when anything looks the least bit uncomfortable he won't go there. I watch Shark Tank a lot. He is truly cringe worthy.

Cuban should really just stick with what he knows.

Mark is part of the MSM crowd. He's going tell the public bs info so the elite would retain their wealth. Hold when crypto goes up, buy more when it dip!

Its funny people who own no Crypto Currency now think they are "experts" all of a sudden.

The bankers had to trot out one of their stooges as expected, I guess it was Cubans turn to try and stop the BTC train.

Greg you are the man!

I have my signature!!!! I will upload it to Questrade right now and I will send it to their headquarters in Toronto tonight! Cheers!!! Thank you Greg the raging Lion!

Bitcoin is not in a bubble, Cuban is though!! HAHAHA

Greg you are correct,crypto currency is not bubble but stocks are in bubble.

I keep making the mistake of watching Gregory Mannarino, on youtube, instead of Steemit. Bad habit.

Lets see how far it goes this year?

Another guy just trying to scare weak hands away! The greed...

The more I watch of the MSM I can't decide if they are actually that stupid and really don't have a clue what's going on or that devious that they know what's really happening and are just manipulating people to keep the system propped up for a little longer while they keep kicking that can.

Hey Greg, with Steemit I found a way to "pay you back" for all the books you gave me for free. I will upvote your post here. Thanks again!

I agree with you Greg.

So far everything Mark Cuban has said on Bitcoin and "blockchain" as he calls it (lol) has been hopelessly ignorant. However, that points to a more important observation. IF in fact he were clued in, that would tell us that this new, amazing thing we are involved in is nearing its end...(don't worry!) End, meaning the end of the Early Adoption phase. We HAVE to understand where this technology is in its life cycle. So from Cuban we can see that we are somewhere still in Early Adopter.

Also if you look at the way he speaks...he is frankly the enemy. His phrasing is very similar to what we've seen from Bill Gates and Jamie Dimon (also enemies). Their goal is to steal/appropriate this technology for their own purposes...NOT bring "power to the people". They want Control. They want "Blockchain" the technology, and they definitely DO NOT WANT decentralized applications, non-government currencies(!), and certainly not human-to-human transactions without themselves in the middle taking a cut of it all. The establishment (aka Deep State) FEEDS on the energy that we produce. They are parasites. We can cut them out, like a cancer surgery. THAT is the beauty and power of cryptocurrency. And that's exactly the thing that they have not managed to wrap their minds around yet. They simply cannot imagine a world that they do not control. Well, you know what? We Are Coming. And a world where Empires finance their wars for profit through tax slavery...that world is about to end.

And BTW I watch Greg every day! Love your stuff man

How many Cryptos is too many? How many will remain?