Agustin Carstens of the B.I.S. Is An Environmental Disaster And A Threat To Life On Earth

dollarvigilante (76)in #bitcoin • 3 years ago In the last week, a bloated sack of protoplasm who works for a global enslavement system, the Bank of International Settlements (BIS), Agustin Carstens, said, bitcoin is "a combination of a bubble, a Ponzi scheme" and, due to the energy consumption required for mining it, an "environmental disaster." I’d say Agustin Carstens is a natural disaster and a threat to life on Earth!

Forgetting for the moment how much cattle must be sacrificed in order to snake its way through the kilometers of putrid intestines of this bureaurat on a daily basis… the amount of material needed to make even one suit that can somehow fit around this morbidly obese communist could likely clothe all the children in Bangladesh who otherwise have been impoverished by his very institution.

He calls for a “clampdown” on bitcoin, but the only things he really clamps down are Big Macs and the worldwide economy which is destroyed by the BIS and its cartel of central banks.

The continent-sized being called Agustin also says bitcoin is a bubble.

Gee, what causes bubbles, Agustin? Can you take your hand out of the super-sized bag of potato chips to even try to get your grease soaked blood to flow to your brain for a second to even answer that question?

Don’t bother, I know the answer. Animal spirits, right? You’d know all about animal spirits having killed literally tens of thousands for your personal consumption in your lifetime… which isn’t much longer by the way the way you are chowing down.

Well, the answer is wrong, of course. The answer is the central banking system of which you are a large, pun intended, part of.

So, to point at bitcoin and say it is a bubble and should be “clamped down” on is missing the point. The BIS and the central banks should be clamped down for creating all the bubbles.

And, he says, bitcoin poses a threat to “financial stability”.

If, what he is saying, is that bitcoin could potentially rid the world of the BIS and central banks then… good! That’s the whole point Agustin. You might have to get a real job soon and, I hate to break it to you, knowing nothing about economics and being a walking health disaster are not exactly what most employers are looking for.

But, hey, if you lose your job then maybe you won’t be able to afford the thousands of dollars in junk food you consume daily… which may actually save your life.

You still won’t get a job though because you are a f**king moron.

Bank of International Settlements calls Bitcoin a ponzi? Wow, how pathetic is that. If anything, fractional reserve banking is the most insidious ponzi going...

It is hilarious indeed that this guy talks about a bubble and environmental disaster. As he is describing himself LOL

Carstens early on in his career actually seemed like a very bright and promising economist.

Unfortunately, in recent years he's turned to the dark side; my guess is he probably got brownstoned by the Cabal and thereafter became a highly malleable soldier of darkness.

I invite you all to check out the link below to find out more about the dirty little secrets and legal machinations the BIS employs to commit their heinous crimes on humanity (note that the IMF & World bank are arguably worst). 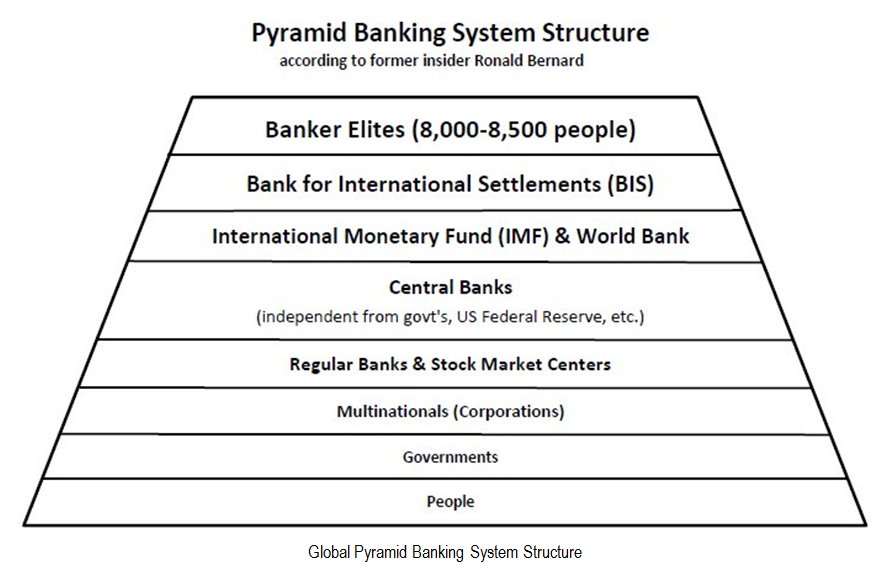 The 2nd part of the series The BIS focuses exclusively on this nefarious organization.

The BIS is now certainly behind this global effort to crack down on cryptocurrencies; so let's expose them for their own criminal wrongdoings.

There's no denying that unless Agustin clamps down on his stomach capacity he's more than likely to make a very nice meal for his reptilian overlords, when their Babylonian money magic no longer holds power in the minds of humans living on the surface of the Earth because we now use cryptos.

He's too sexy for his fat I was watching the guy talk and by the way he was taking ,it means he doesn't have much knowledge about whats going on on this industries at the same time the his talk was all based on fear they are loosing power.

yeah he's never heard of PoS apparently....He's just saying what he's told to say. Funny he's using taking points that might of been valid 6 months ago, which in crypto is more like decade! lol

Why these top 63 cryptocurrencies are best

The Elite is a powerfull beast. It is hurt and bleeding. It will die inevitable, one must be really cautious not getting to close to it., it is not quite dead yet and can make big damage if disturb. Carefull Jeff! we love you and dont want to loose you.

There’s a saying that cites; “ Don’t bite the hand that feeds you” and Jeff Berwick just did that.
Who is going to protect the almost 2000 people attending AnarchApulco now?
He is messing around with the wrong crowd in Mexico, armed men can break into the site where the conference will take place, they can kill all of them and guess what? They will escape without a trace. Jeff went too far criticizing the looks of the diplomat and the Mexican government pays a lot of attention to that. I hope I’m wrong for the sake of Crypto and the attendees to the conference.
Good luck to you all.

You got a point here melip... Hopefully nothing bad like that happens. But fuck these pigs must go down!!!

My father used to hung out with the high government elite in Mexico. I know how they operate and they hate acts like the one Jeff just engaged in.
Besides, people’s appearance should not be the point of criticism. We are better than that.

Totally agreed. Yet it is easier to forgive Jeff's dirty mouth versus the Elegant and Diplomatic talks of these criminals. I never forget Dr. Kings Statement "The ultimate tragedy is not the oppression and cruelty by the bad people but the silence over that by the good people." We are awekening and they Should know their Act is over.
We are TIRED to be loving and caring with those who are against humanity. We now discovered we've been deseived and betrayed. This is a jungle now and in the jungle you kill.

Precisely.
I not only see how Jeff placed thousands of people’s lives in jeopardy (understanding the killing part), but how he put the future of Cryptocurrency in danger.
It is not DIPLOMACY’S fault that negotiations have failed but the negotiators failing to use DIPLOMACY are the ones responsible for the chaos.
He lives in Mexico, he should know better. But like I said, I HOPE I’M WRONG!

Let’s not ignore the facts

This "bloated sack of protoplasm", as Jeff so eliquantly said, is just regurgitating what his masters tell him to. No doubt he's a dog who returns to eat his vomit.

Wow! Agustin Carstens is a disgusting man in many ways!
upvoted and resteemed

This is great post i appreciate your bitcoin.. thanks for sharing this crytocurrency news.. Best of luck my dear friends.. resteemit..

Any thing which is not making profit for them is not good.If you offer that guy that you don't have to invest we will give you few million dollars. Only then you can see their true face.If they see that something is going to be a threat to their position they will try to demolish that matter. This sort of idiot should be cicked out of the world and some one should expose their ugly faces. Thanks for the post.@upvoted

¨the only things he really clamps down are Big Macs¨, pinche marrano !

Such a conflict of interest for him to give an opinion on the subject... He ahould embrace it given the opportunities it has for the underserved population. I guess those people don’t matter for him.

You just aren’t right! Funny though.

Very good post. I have read your writing very carefully for me to understand about botcoin which is a big bubble like a balloon and how many people are crazy about it and end up badly. we wait for your next posting.

Dude. That guys blood pressure must be off the charts! What is going on here? I truly hope he loses his position, and tries out for the biggest loser..

He's a proud product of my country (Mexico)

He actually managed to get Mexico through the global crisis with minimal damage when he was the chief economist in the Calderon years, and later he was the president of our central bank. Just to give some data so this doesn't end up being a bunch of ad hominems.

Just one of those we get from greedy people especially public office holders.

Agustin is a kind of person dont deserve to live. He and his bank killing people and the earth itself. Shame on you talking pork.

He's sad he didn't get in early

That's how they say things anyhow so that the price will reduce in order for them to invest secretly.

This Mexican banker is another loser who does not get it.
Wait and see, there will be no central banks.

The want to create panic on people. We just keep going and improve this technology, probably some day we will be financially free

anyone want to hazard a guess as to what that lard ass weighs? I couldn't find it on google lol

this is funny. love the description of Agustin in your post.hahaha.

He basically described himself "a combination of a bubble (you don't just wake up like that), a Ponzi scheme (he's affiliated with one)" and, due to the energy (a lot of food to keep that going) consumption required for mining it, an "environmental disaster (cracks 150+ toilet seats a year)."

well can analyze and give their opinions, think in a positive way how many people have made fortune. From a validated source (Brian Winter), I've come to realize that Mexico’s economy has averaged growth of only '2 percent' so far this century with Carsten at the hems of financial affairs. Although that's not cataclysmic, it has also not been dynamic enough to reduce poverty — which has been stuck since 2010 at about 46 percent of Mexicans.
[Ref]
(http://americasquarterly.org/content/man-brilliant-so-why-doesnt-mexicos-economy-grow-faster)

My take? Carsten should focus his attention on Mexico and leave crypto to run its course. He should find some other excuses for his deficiencies.

Damn! What is the carbon footprint of that mans belly?

What scares me the most is the fact I have never seen his face on any MSM channel before...

this man has meme potential.

The jokes just write themselves, don't they?

If only he had worked in "inflation"....

@jeanlucsr you need to see this

What does he eat for breakfast? A full grown male Buffalo?

No "government" official, doctor, or social service official should be overweight.

I didn't even read the article. I just scrolled down to say that guy is extra thicc. What a savage