Like almost everybody I speak to these days about Bitcoin I was a skeptic. I mean, I wasn't a hater but like everybody else alive right now I was born into a system of fiat money. So, that's what I was convinced was money by the time I needed to know what money was. How could a digital . . . 'thing' be money? Since I'm a gamer for life I had seen more than my fair share of "Digital Economies" crash within months of release. Back in the day I used to play Ultima Online quite a bit but there were many other games with a fair amount of development time given over to the creation of an in game economy. All of these in game economies were brought to their knees with what was usually a "dupe" hack in which either the base currency gets duplicated and sends the currency into parabolic inflation or high value items (swords and such) being duplicated to the point where the item became ubiquitous losing all value. How in the hell would Bitcoin be any different? I heard about Bitcoin around 2009 or so and didn't buy any because I didn't know how and, like I have said, I wasn't convinced at all that Bitcoin wouldn't be duplicated in some fashion (and I ain't talking about the never ending barrage of shitcoins). Even had I bought some at super low prices I most likely would have got Goxed along with everybody else because it takes quite some time to figure this stuff out e.g. why you need and how to use hardware wallets and cold storage. With that said I finally entered the Bitcoin space during the summer of 2015. I was able to catch the very bottom of what I have come to know as the 15 month bear market. I used dollar cost averaging to continuously buy about $250 worth every month until the end of summer 2017 with a couple of larger buys towards the end. 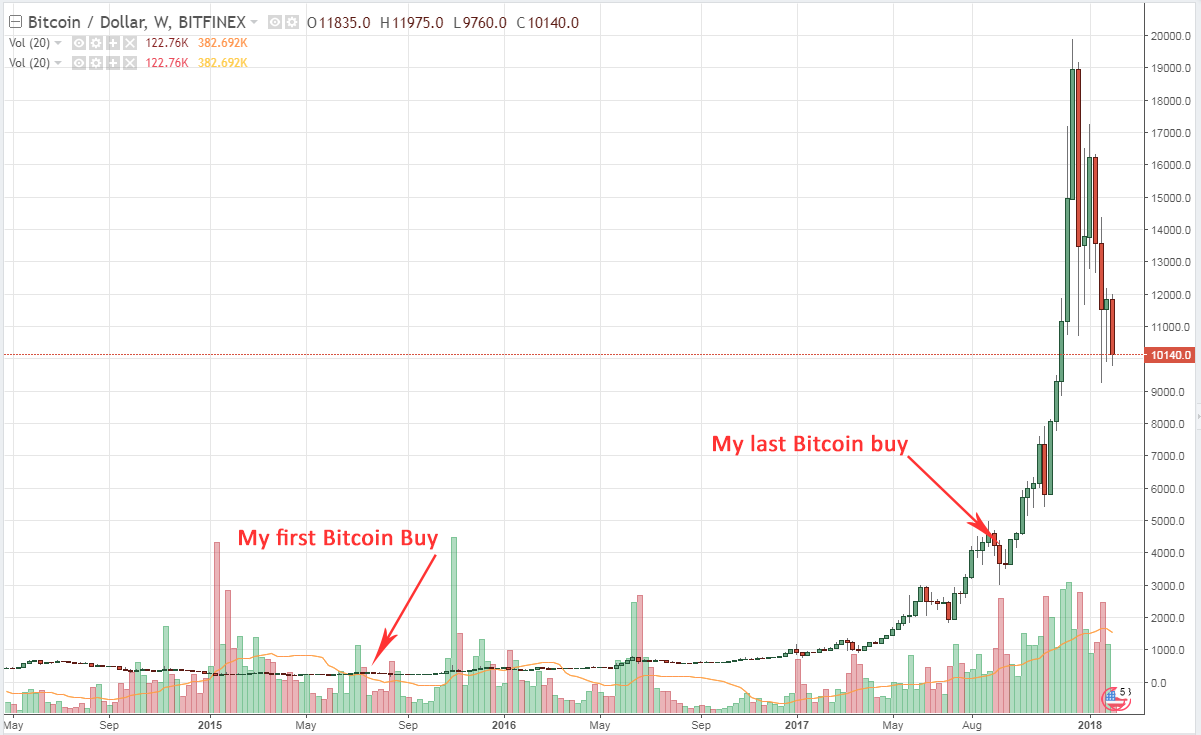 The reason I finally jumped in was on the advice of a pod-caster. He had said, "this stuff is here to stay and it will become ubiquitous so you need to learn how to use it". It so happened that he began taking Bitcoin as payment to subscribe to his podcast's support group and I thought, "what the hell". I got an account on Coinbase, hooked my bank account to it and bought almost one full Bitcoin at $250. I immediately turned around and bought a subscription to his support group for 0.2 BTC.

So here I am staring into the abyss that is my first bear market. I never had to go through the one that the old timers went through. Here is what is interesting though . . . I think I might be more prepared for this bear than even the old timers were because of the following:

I could expand this list until the world looked level but it would be beating a dead horse. Bitcoin has been, is being and will be attacked by everything under the sun forever and ever. If you are thinking that a day will come when it won't be then you do not have the HODL mindset.

But here's the other thing: I am also staring straight into some of the most fascinating technology development the human race has ever known. Most of that is occurring on Bitcoin, not Ethereum, not Dogecoin (don't get me wrong, I love the Doge but it's not being actively developed), not (insert name of shitcoin here) but Bitcoin. It's mostly happening on Bitcoin. Schnorr, MAST, Lightning Network, MimbleWimble and bulletproofs. We are staring square in the face of the most cutting edge technology ever seen and it's happening on Bitcoin.

We might be in a bear market and we might see Bitcoin drop even more in price. I'm OK with that. When I finally did figure out that I had pissed away thousands of dollars on a video game and a subscription I wasn't mad but I was a embarrassed; I hadn't understood two of Bitcoin's value propositions at all. Why would I let go of something of which there will only ever be 21 million of for a transaction that I don't need immutability for? The government is not going to censor me purchasing a video game and if they tried then it must be damned good and that's when I'd whip out good 'ol Bitcoin but not a single second before.

I HODL because I can better see the future because of my past with Bitcoin.

I HODL because no one truly knows where or how far this technology will go.

Thank you for this... Reaffirming my HODL mentality, which for the noob that I am to this, I really need right now.

It does suck. It did yesterday and it does today but we bought a ticket to ride and that's what I'm going to do. One other thing though, the amount I have learned and the people that I have met will be with me after we crash land on the moon or plummet through the Earth.

Slow reply from me, sorry about that, getting distracted all too easily these days... be it researching crypto, crypto twitter, crypto chart TA on tradingview, or actual crypto trading (some good, some bad, and some very ugly trades!). Most of the time i'm just doing my best not to FOMO in on some shitcoin... Let's revisit this at the end of 2018 for sure.

Steem on and hodl on my friend! Great story! Added to tonight's Daily Dood.

Thank you my man. That's mighty kind of you. And thank you for the re-tweet. Have a great day.

OMG!!! Ultima Online! I used to play that!! (Catskills server!)
it was the first experience I had with digital value as well.

Housing space was limited so these were valuable and sold for dollars. But I also had rare glitch items that were not supposed to be in the game: an opened book (as opposed to the closed one) worth $250, some closed barrels, scattered hay and my prized possession: a pile of horse dung! I could have sold that for $400 at one point because it was so rare.

And this was back in 1998, years before the internet really went mainstream. I have no doubt that blockchain will be revolutionary today, in games and itemization. It will be much crazier than ever before

I had a character named Barad Dur on the Siege Perilous shard. GM Blacksmith. As far as I know there are still Valorite katanas and full plate sets with that name on them.

The thing I remember the most was the periodic "house drop" to clear out the servers of stuff from inactive players. They never seemed to go right.

I also remember when you could dismember a PC and lock the body parts down on the floor in your house and as you scrolled over it with the cursor it would read "The severed head of [PC name here]".

Oh yes, the PvP server!
I was into the RPing community which was huge on Catskills. I fought the Shadowclan Orcs pretty much daily! lots of pvp in studded leather armor and crap-weapons.. much more fun than tank-mage going corp por, corp por! God I miss that game.. Never was anything quite like it, and EQ/WoW totally ruined the genre.

You mention dismembering a pc, but actually even before that you could chop up their bodyparts and cook it over a campfire and eat it :)
Devs took it out pretty soon though, haha.

OMG! I never saw that. Hell I never even heard of that that I can recall.

Yeah, that game was awesome. I get nostalgic when I see screen shots and such. I backed Richard Garriot's new game, SotA and have been unpleased to say the least. In an interview he said that his team approached EA to get the brand back but they said no. To damn bad.

Great piece, and hodl on. I would like to add MimbleWimble and bulletproofs to the list of awesome tech that is being developed for Bitcoin.

Seems like you got most of your bitcoin in the time frame I got most of mine. I think out of my cryptocurrency, bitcoin is 95% and it’s on a hardware wallet. I stopped most of my buying, however, at the end of 2016. I ran a full node in 2016 but I had technical difficulties with how I set up my virtual machine. I am better educated now. I have a full node running on a raspberry pi and I am just getting started with lightning on my desktop pc. It’s working on syncing to the testnet chain. I will work with lightning once I get a full testnet sync. The more I study bitcoin, the more I like it. Its going to have the best use cases by the end of 2019. There are currently 2000 alts. Next year lots of them will be delisted from exchanges.

I do have Zap but since most of my time is on a computer at work behind an enterprise level firewall . . . well, let's just say I can't experiment with it.

As to the alts, I am so sick of seeing just how much stupid people will buy into.

I HODL. Great sentiment. I'm learning this philosophy as I first started on some bad habits on my Crypto journey. This post definately has some sentient thoughts that I can say I went through as well. But in the end the correct path to bringing this technology and the world to a more reasonable place is growing it and HODDLING! resteemed

Well thank you rafterman. I appreciate that.