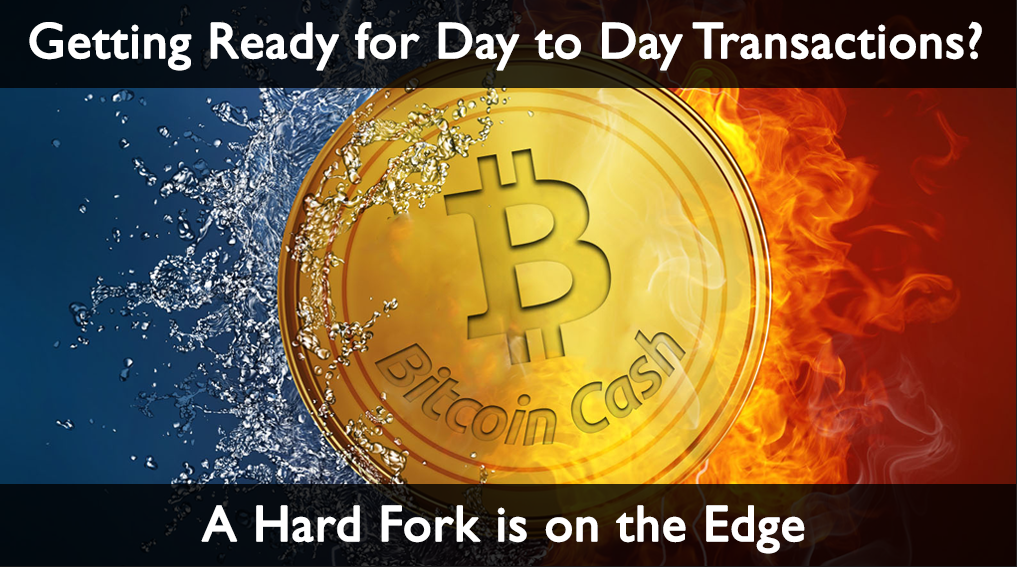 There are many strong believers in Bitcoin Cash since it got introduced. The team behind Bitcoin Cash & its supporters believe, they are driving Satoshi's vision and claim to be original Bitcoin hence, according to them Bitcoin Cash is not an AltCoin.

I personally don't have anything against Bitcoin Cash rather I believe in its team and developments. I however not in the favor of calling it to be the legend i.e. original Bitcoin. I personally believe, whoever holds the title BTC is the true holder of the original chain rest everything in crypto space should be considered as altcoin including Bitcoin Cash.

Having said that, Although I believe Bitcoin Cash has already shown us it's potential since it came out. The Team behind Bitcoin Cash is trying to make it workable with day to day transactions.

Problems with Bitcoin in Transactions?

We need to accept the fact, Bitcoin is not ready for the day to day transactions, where you can buy stuff at a store and pay with Bitcoin. Bitcoin 10 minutes is the minimum time, one has to wait for the transaction to get included in a block and starts getting confirmations on top of that, every block in Bitcoin can only hold around 2000 transactions at current stage since blocks are currently limited to 1,000,000 bytes (1MB) in total size which drives us to the calculation of the avg 3 transactions per second. Which is the main reason, we often find our Bitcoin taking a lot of time to reach the destination address, sometimes it may take hours or even days.

This kind of problem drives transaction fees to go higher than other cryptocurrencies. As the only option for the user is to keep on increasing the transaction fee to get it included in a block & get confirmations in higher priority.

Bitcoin Cash announced that they will be hard forking bitcoin cash two times in 2018 to get it ready for the day to day transactions. Upcoming hard fork will occur on May 15th, 2018.


This hard fork is not going to create another coin, It's rather an upgrade to the network.

However, there's is always a possibility in hard forks to create a new coin but it's not the intention for now.

Bitcoin Cash's current block size is 8388608 Bytes (8 MB) which is already 8 times higher than Bitcoin (BTC). Which not only made Bitcoin Cash to handle 8 times more transactions than BTC but also enabled it for lower transaction fee in comparison to BTC.

I would love to know your thoughts on Bitcoin Cash upcoming hard fork in the comment section, Also what do you think of Bitcoin Cash, should it be called as an altcoin or the original Bitcoin?

Constructive explain about Bitcoin is helpful for me.

bitcoin cash is a traitor to bitcoin, it's stealing money from bitcoin, in the end people will realized that it is not mined and there is no proof of work in it and no value at all especially when it comes to security.

i will stick to bitcoin core

I think it could potentially make bitcoin cash closer in value to BTC but I don’t think it will ever go higher than BTC. I do like that they are making it better for commerce since that is the biggest reason for the entire idea of cryptocurrency. This is why I like STEEM so much. If I want to sent coin it’s sent and knowing that I don’t need to copy a QR code and can simply use the web GUI is great. I think we need to be pushing that the best crypto is the one that is not worth the most but is easiest to transfer with the lowest transaction fee. That will be the obvious best choice and the ultimate winner. That and of course instant transaction verification which could be enabled f you institute another coin that acts as a blockchain autocheck for another blockchain that would provide instance that the transaction will go through i.e. people having the correct balances.

I do agree with you @wwamd, We call #Bitcoin the king because it introduced us to blockchain technology. But that doesn't mean Bitcoin will remain highest is value, any other crypto efficient enough to handle transactions can and should be used in day to day transactions.

I dont believe BTC or BCH are going to be leading the way for mass adoption. Theres coins out there that had the benefit of years of hindsight to identify and improve on where BTC/BCH suffered speed and scalability..

BCH with 32mb blocks could end up losing Nodes. Assuming full blocks the chain would grow roughly 4gb per month. On top of that bloated chain needing storage the Node operator would be using considerably more bandwith uploading to the network to verify the chain.

This could lead to more centralization...

There are obviously workarounds for these problems. Whether Roger would deviate from the whitepaper that much remains to be seen.

For the adoption they seek i believe BCH needs more than big blocks..

I believe team plays a big role in any industry, not just crypto & we have seen BCH team is constantly active when it comes to upgrades. However, points you have mentioned cannot be taken lightly, there various issues at this stage.

BCH in starting announced 2 hard forks in 2018 one is in few days and the second one would be in November, I am waiting for their statements for the second update, If they are addressing these issues.

And thank you very much for sharing your insight @living-in-198tor, I love to talk with like-minded people.

My pleasure. I very recently joined Steemit. Im not social medias biggest fan due to Facebook, however this platform is a breath of fresh air...

I agree very strongly with you. Bitcoin Cash is not the real Bitcoin, their technology is totally different, I looked at that. But Bitcoin Cash will be a very useful alt coin for quicker and cheaper transactions. Although, there are already other alts like TRX that will have almost no transaction cost. I don't know what will then become of Bitcoin Cash? I wonder if the price of BCH will dip after the fork?

@murtaza78 Profit booking is something which happens in every space.

Love trading? Full into cryptoworld?
So, you should start use CryptoFications - best software for traders ever!
Description, support and download mirror there: cryptofications.com

Bitcoin is very expensive in Pakistan, you increase my knowledge about it thanks

@amnasahar Bitcoin is getting expensive everywhere I believe. And according to me it's will remain go higher. :)

I really wanna learn more about Bitcoin... its really the talk in town... whenever I am in a cafe or mall... a lot of people is talking about it

I believe, It is very important for everyone in crypto space to know, what is bitcoin and how it works to secure our future. @musingan In case you require any help, you're welcome to join SteemBulls community on discord: https://discord.me/SteemBulls

To Bitcoin, or to Bitcoin Cash...
That is the question.
Or is it the answer?
Hmmmmm...
Sorry, in a silly mood.

It Should be considered as AltCoin However Bitcoin Cash do have An Impressive Feature! Thanks for the Great Article! :)

Thank you @faady92 for appreciating...

Cool, I'm a beginner in the world of crypto-coins and the more information the better :)
Anyone who has some tips can say down here :)

@wallacegmp If you feel like a newbie or beginner & require some help, You're welcome to join our SteemBulls community on discord: https://discord.me/SteemBulls

The post is really helpful for me. Thanks for the information.

I get many knowledge form this post! Thank you!

I was sure this hard work will create 2 different coins. Thank for the info

it seems BCH will rule the world

Love trading? Full into cryptoworld?
So, you should start use CryptoFications - best software for traders ever!
Description, support and download mirror there: cryptofications.com

Nice post, I will subcribe your channel. Good luck !

its fine but so taff

You got a 16.43% upvote from @postpromoter courtesy of @bunnychum!

Thanks for you Sir

It's time to make your cryptolive more comfortable!
Start use cryptofications.com - and receive notifications about difference in crypto status on the desktop.

For a total calculated value of $166 STU, $315 USD before curation, with approx. $41 USD curation being earned by the paid voters.

Hi @bunnychum, I just upvoted you!

I see that you know what you're talking about when it comes to crypto, so we're inviting you to an invite only Altcoin Fantasy contest. You can find the username and password for the contest on our Steemit post here.

Here is the link for the contest: https://altcoinfantasy.com/p/steemit

Thanks and we hope to see you there!